With the start of school less than two weeks away, debate over COVID-19 precautions — particularly masks — has intensified.

On Aug. 11 parents gave sometimes emotional comment to the Teton County School District No. 1 Board of Trustees, expected to decide next week whether to mandate face coverings. Public comment is usually a staid affair, but that was not the case last week.

“I understand this is a difficult time, but the masks need to go or we will be pulling all our kids out of that school,” said Jamie Young, who said she was speaking on behalf of a group of Moran Elementary School parents.

School board trustees find themselves on the precipice of a decision almost guaranteed to generate backlash. For most of the contingent that spoke Aug. 11, a mask mandate would be unpalatable. On the opposite end of the spectrum, parents and teachers have expressed a desire for a face covering rule to limit student and educator quarantines.

District officials ultimately delayed making a decision until just before school starts to account for how fast the pandemic situation can change. The board has tentatively set a meeting for Aug. 25 to revisit masking.

“My hope was by waiting until a little closer to school I would be able to gather more data,” Superintendent Gillian Chapman said.

Face coverings are just one layer of protection in the district’s Smart Start plan, an updated version of the framework created last summer. In large part the district isn’t making many changes to its COVID-19 precautions.

“This year will look very similar to what it looked like after spring break last year,” district Communications Director Charlotte Reynolds told the News&Guide.

The biggest change is a lack of pods at elementary schools. Primary school kids were kept in classroom pods last year to limit exposure and the scope of potential outbreaks. This fall the kids will return to a more traditional schedule, spending five days a week in the classroom.

Other precautions, including increased handwashing, maintaining at least 3 feet of social distancing when possible and making testing available will remain in place. As it stands, tests will be given to any student that wants one, though rapid tests will be reserved for symptomatic kids.

The Smart Start plan leaves open the option for surveillance testing, particularly of students in activities, but it does not outline a regimented program. Trustee Kate Mead told the News&Guide she’d like to see one, which could be developed should the rest of the board agree.

“If the board would like something more formalized or structured, staff can certainly look at that,” Reynolds said.

A matter of parental choice

Parents have not responded to the other tenets of the district’s plan with the same fervor as masks. Generally, those who support masks also say they like the other precautions, and those who oppose face coverings have not directly argued against testing or social distancing.

On the subject of masks, however, parents have drawn their lines. The contingent that spoke against the idea of a mandate raised several concerns with two main tracks of reasoning.

“Yes, I’m calling it medical tyranny, because that’s what it is.” —Shad Free, parent

First, they said masks should be a parental decision.

“I want for us to be able to have a choice, you know, to do what’s right for our children and what we feel is right,” parent Martha Vorel, who spoke at the meeting, told the News&Guide on Monday.

Parents like Vorel and Young, the mother from Moran, said it was fine if other kids wanted to wear masks, but that forced mask wearing infringed on their children’s rights. Shelby Scharp took that reasoning a step further.

Mandating masks for students, she said, amounted to “discrimination” because it is her “moral choice” to have her kids unmasked. She wants her daughter to have the choice, and she told the board a mandate would violate her constitutional rights.

“I want my child to know I’m standing up for what I believe in,” she said at the meeting.

In general, if the board decides to put a mandate in place it is standing on firm legal ground. Last summer, when Teton County was considering a mandate, Leslie Francis, a professor of medical law and bioethics at the University of Utah, said courts have long upheld the right of governmental entities to mandate public health measures.

In addition to asking for “bodily autonomy,” as Vorel put it, the parents argued masks are ineffective. They pointed out that surgical ones include a disclaimer that says they don’t stop disease, cited studies that they said found them to be ineffective, and claimed that masks actually cause disease by trapping microbes and fungi.

They also said that COVID-19 is not dangerous for children because they have a dramatically lower death rate from the disease than older people. However, growing evidence suggests kids can contract and transmit SARS-CoV-2 at similar rates as adults, and data from the U.S. Department of Health and Human Services showed that more than 1,900 kids were hospitalized across the country Saturday with COVID-19, a record.

Still, some parents don’t believe masks are effective and actually constitute a danger to kids’ health.

Not actually that dangerous?

Parents cited a lack of deaths among local teachers and students last school year, saying that proves the disease is not as dangerous as it is made out to be.

Michelle Rooks, a Jackson Hole Middle School history teacher, doesn’t like that as a barometer of safety.

Teachers who spoke to the News&Guide said the lack of demonstrated transmission in schools and no fatalities is instead proof the district should start the school year wearing masks, which were required last year. What worked last year, they argued, could again be effective as the Delta variant picks up steam.

The lack of vaccination in younger kids is also a problem, said Fio Lazarte Beal, a Munger Mountain Elementary School teacher. She taught virtual classes last year, an option the district will not have this year, and knows some students have immunocompromised relatives at home, who may not be able to be vaccinated.

“We can’t think about ourselves alone on this,” Beal said. “We’re living in a situation that asks us to think about everyone.”

Parent Jasmine Horn agreed. Her kids were in the virtual classes last year, but she believes they need the social interaction they get at school. As she sends them back, she wants to know they and other unvaccinated people, including district employees, are protected.

“They might have family members that are dealing with cancer or cystic fibrosis, and they can’t take the vaccine for whatever reason,” Horn said. “So we need to think of those people as well. It’s not just us. It’s a whole community.”

Beyond the communal safety aspect, some teachers worry maskless students will find themselves quarantined and out of the classroom more. Last year COVID-19 exposures in schools didn’t automatically result in kids and teachers having to leave school if both parties were masked. 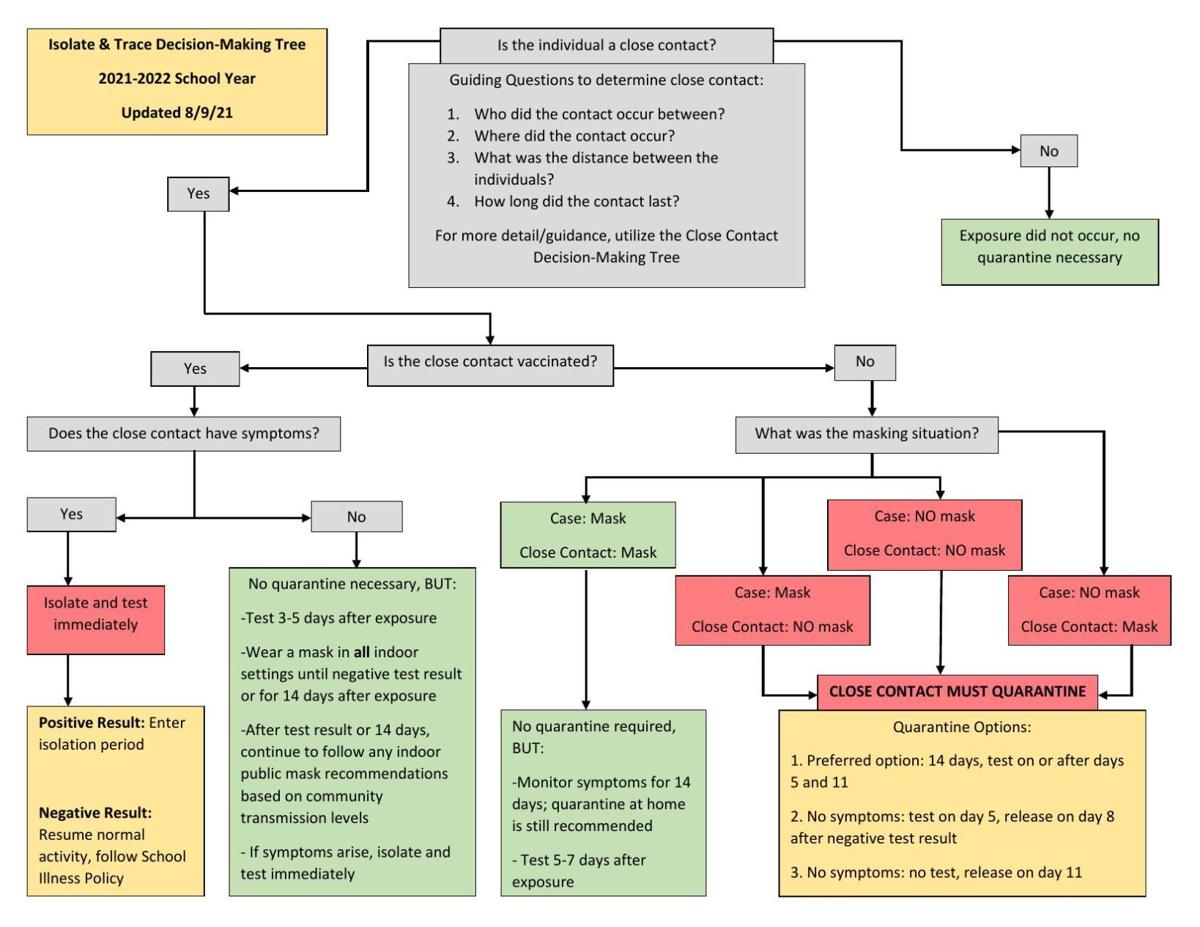 This year’s guidelines say that if vaccinated people are exposed to the disease, even unmasked, they don’t have to quarantine unless they develop symptoms, at which point they would test and isolate if infected. Unvaccinated people, which includes all kids under 12, would have to automatically quarantine if they were exposed to the disease and either party was unmasked.

Even though 63% of Teton County’s 12- to -17-year-olds are vaccinated, a good chunk of the district’s student population is not immunized. Without a mask requirement, teachers said, it could result in a high number of quarantines that would be more disruptive than masks.

Munger specials teacher and librarian Melissa Snider said she was quarantined for 22 days during the 2020-21 school year, making it harder to do her job. On the student side, when half the class is calling in on an IPad or other digital format it makes it tough for teachers to provide the same education.

“Kids just don’t get the same level of instruction that they would get in an uninterrupted face-to-face type of situation,” Snider said.

Board members and district administration officials must consider all the input while weighing the epidemiological realities. Fueled by the Delta variant, COVID-19 case rates are higher than they were at this time last year, according to Wyoming Department of Health data.

“His letter absolutely is very significant to me,” she said.

A decision is coming

After giving themselves two more weeks to make the choice, the school board is approaching a decision. Trustee Bill Scarlett said he wants masks to be optional, but other board members appear to be giving themselves as much time as possible.

“I am going to keep my North Star as keeping children in school,” Trustee Betsy Carlin said without committing to a stance until the vote.

Even after considering all the factors, the school board could be preempted, Gingery said. Riddell has the power to mandate masks, though due to recent changes in Wyoming law, his order could stand for just 10 days, then the Teton County Board of County Commissioners would need to reapprove it.

So Gingery added: “At this point I am waiting to see how that plays out, because ... it may be that we just don’t have a role in this.”

This story has been updated to say that Melissa Snider is a "specials" teacher, one that travels between classes for specialized instruction. —Ed.

Medical tyranny? What nonsense. Does the comment come from someone who even know what tyranny means? Just put the mask on and get the vaccine. It’s literally the least you can do.

I've been skeptical of vaccines and even flu shots for many years. This is based on serious vaccine repercussions I've seen by a friend's child and information I collected from real medical experts. I reluctantly got the Covid 19 vaccine because I'm 66 and have minor health concerns. I get the real concerns about vaccines, but not the crazy internet BS too many people lacking the ability to critically think have. If I had kids, I'd probably home school them now. If that wasn't possible, I'd vaccinate them, depending on their age. You simply cannot send kids to school unvaccinated and risk the health of everyone in regular contact.