The synthetic fields on High School Road were installed in 2006. Recent tests indicate a need for maintenance or replacement. 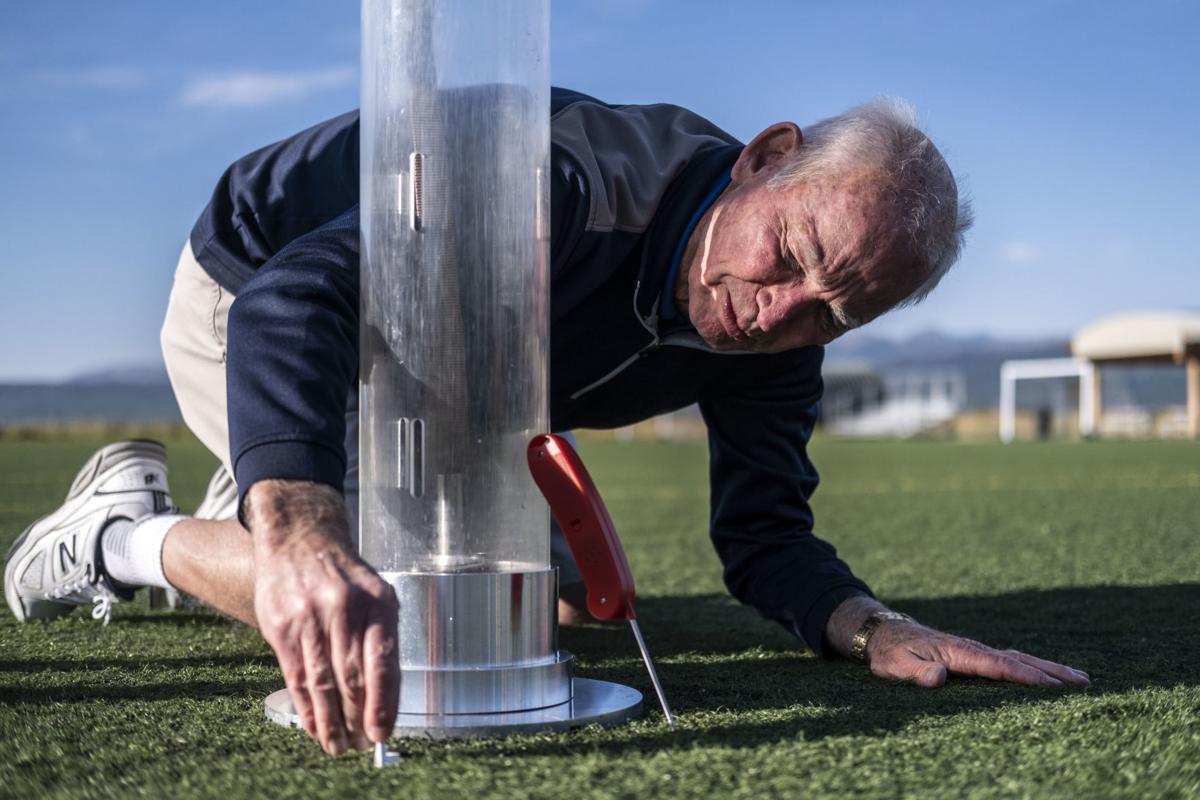 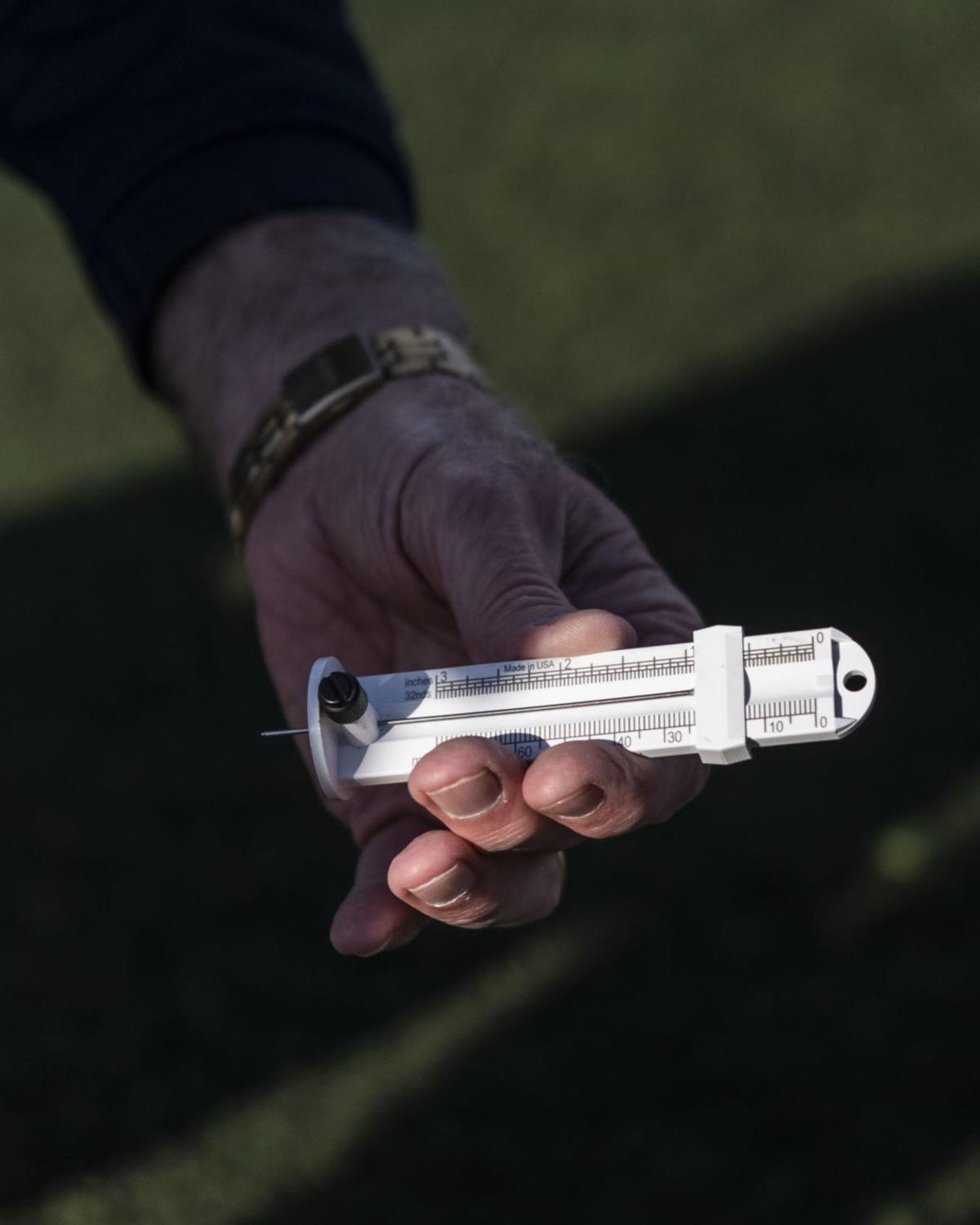 In addition to testing for turf hardness, Splittgerber measures infill depth and temperature. 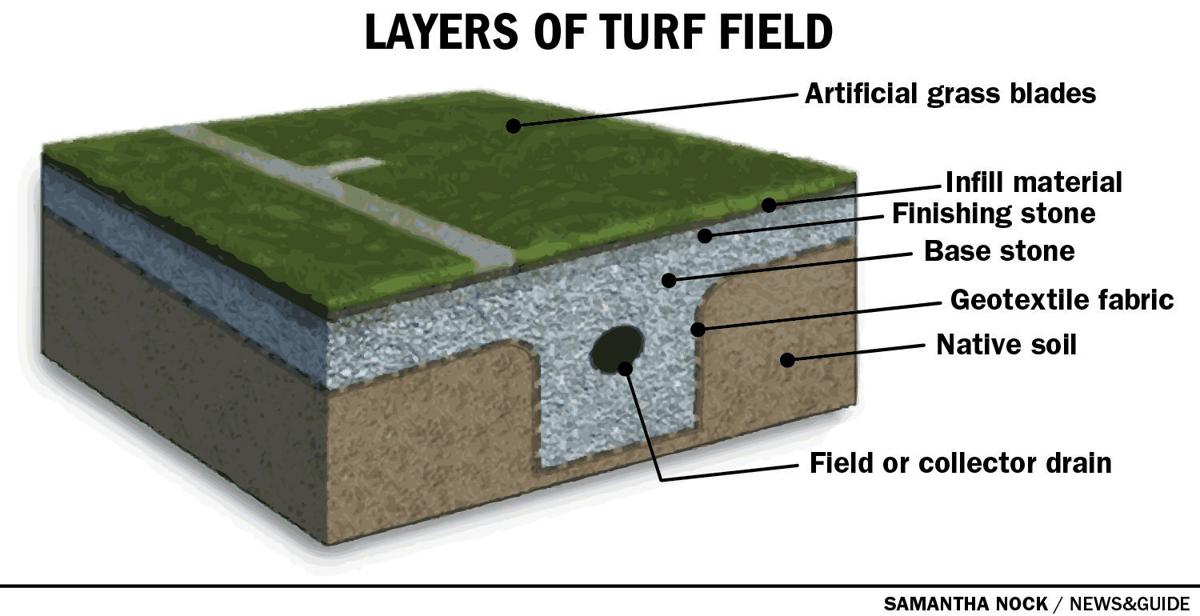 The synthetic fields on High School Road were installed in 2006. Recent tests indicate a need for maintenance or replacement.

In addition to testing for turf hardness, Splittgerber measures infill depth and temperature.

The test equipment looked a bit like the tube a mortar firework is shot from, and it had a 20-pound weight hanging from the top. Splittgerber pressed a button, and the weight dropped through the tube, landing with a muffled thunk on the fake turf. Almost instantaneously the weight sent a shock attenuation reading to the Palm Pilot in Splittgerber’s hand, essentially a description of how much impact the field will absorb.

Splittgerber performed three tests at the penalty kick mark and averaged the last two, in keeping with industry standards. The final GMax average was 216, well above the 200 at which ASTM International says to “expect life-threatening injuries,” including concussions. The group sets technical and safety standards for all types of products and services.

Splittgerber visited Jackson in August on his way from testing another field and found similar results to what he found earlier this month. He sent his findings to the Teton County School District No. 1 Board of Trustees and Activities Director Mike Hansen — basically offering his services to evaluate the soccer fields — but he received no response, he said. That’s likely because the school district, though the fields are on district property, does not test and maintain the fields.

Like other athletic fields in Teton County, the synthetic soccer fields exist under a shared agreement between the district and Teton County Parks and Recreation. The school district owns the land the fields are on, or leases it from the state, and in exchange for community access to the facilities, Parks and Rec tests and maintains them. That arrangement has led to a situation in which both entities say it is not entirely their duty to replace the fields when they have reached the end of their usable life and become dangerous.

Splittgerber’s tactics of rolling into town, testing the fields and then offering his services may not be completely altruistic — school district Trustee Bill Scarlett said Splittgerber “extorts school districts” — but the numbers correlate with the need to replace the fields. A full test involves taking the average GMax reading at 10 spots on each field, and the most recent tests are from 2017. When Sports Labs USA tested the synthetic fields, the GMax averages were 169 and 174, and due to the way turf fields degrade, higher ratings could be expected two years later.

Synthetic turf fields have a simple construction. Layers of drainage rock and aggregate gravel are laid down, then the turf is set atop the stone. Producers have slightly different designs, but the general format is a woven backer with fake grass blades attached to it. To provide shock absorption, rubber crumb infill is laid among the artificial blades. Some modern fields also have an underlayment pad that provides a secondary source of shock absorption.

Over time, as the fields are used, rubber pieces lose their elasticity, while others are pushed around, creating patches with higher potential to cause injury. Testing reveals the dangerous spots, and maintenance can mitigate them by grooming the field and adding infill material. FieldTurf, one of the largest turf producers, recommends annual inspection, testing and maintenance.

The state of Jackson’s fields has made maintenance options scant.

“In 2014 we had Shaw Turf do an assessment because prior to 2014 there was not a regularly scheduled addition of rubber crumb,” Erskine said. “They came out and told that due to the age and condition of the turf, we would not be able to add crumb rubber so that it would be effective.”

The artificial blades are so short or bent that they will not hold more infill in place. The only maintenance that Parks and Rec can do, other than keeping the fields clean, is grooming and sweeping them to keep the existing infill distributed evenly. Going on five years later the fields, which were installed in 2006, have passed their 10-year life expectancy with few options besides replacement to make them safer.

Scarlett, who sits on the school board as well as the Teton County Recreation District board, said the fields fall under the purview of the Rec District, which is ultimately part of the school board, but replacement must be a team effort.

“I truly believe that everybody’s got to come to the table,” he said. “That includes the Rec District through the school district, Parks and Rec, and the county.”

Scarlett was adamant that replacement needs to happen soon, without waiting for another full test like Splittgerber offered. At the school board meeting in June he proposed increasing the Rec District’s levy from 0.45 mills to 0.9 to bring its annual revenue to $1.7 million, specifically to raise money for the field replacement, though Scarlett said it should not strictly be up to the Rec District to foot the bill. The board approved the increase, and with the roughly $600,000 the district has in reserves, Scarlett hopes for a quick timeline.

“We’re going to move forward with a plan to replace it at the next Rec District meeting,” he said. “No replacement is going to happen this fall, but hopefully we’ll be ready to roll in the spring.”

New fields won’t come cheap. After Shaw Turf tested the fields in 2017, the company also provided Parks and Rec with an estimate for replacement. To redo both soccer fields and the football stadium field, the company quoted $1.3 million, with a higher per-field price of $460,000 to replace them one at a time.

“It’s time,” he said. “We want to make sure the public is safe at all costs.”