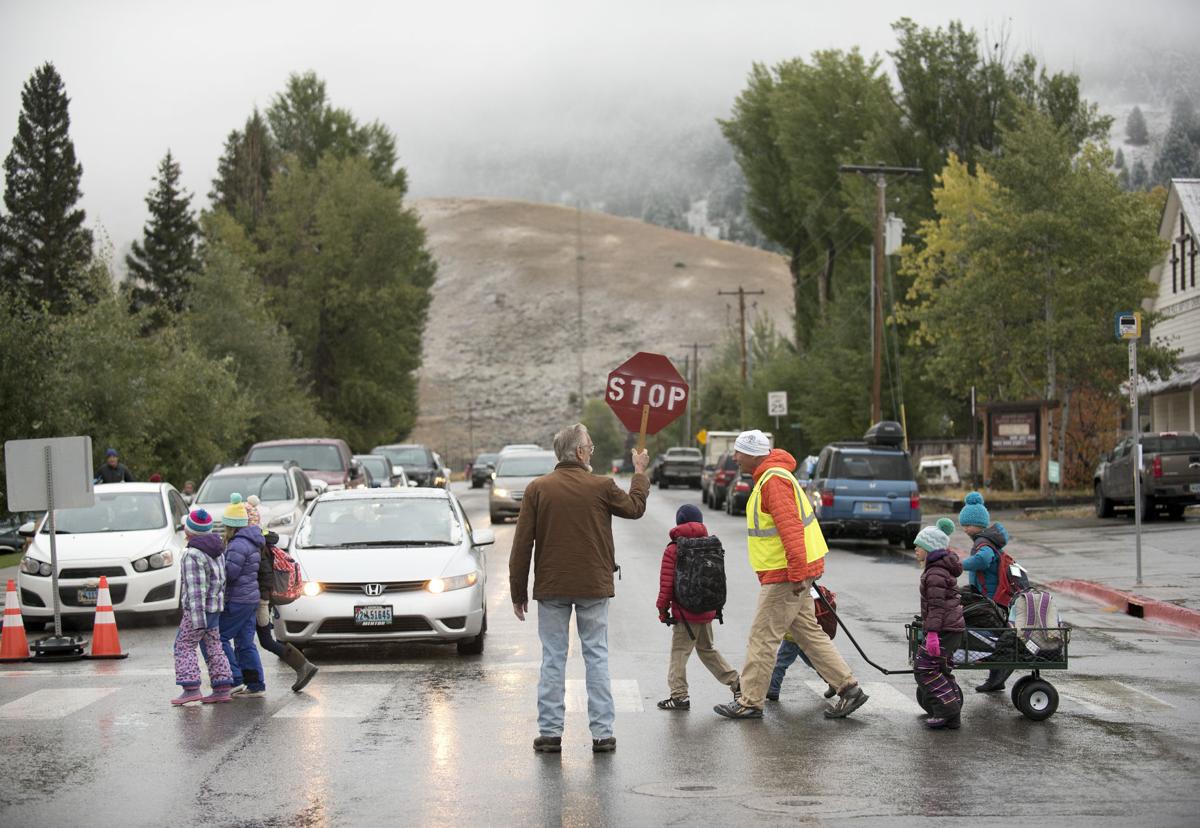 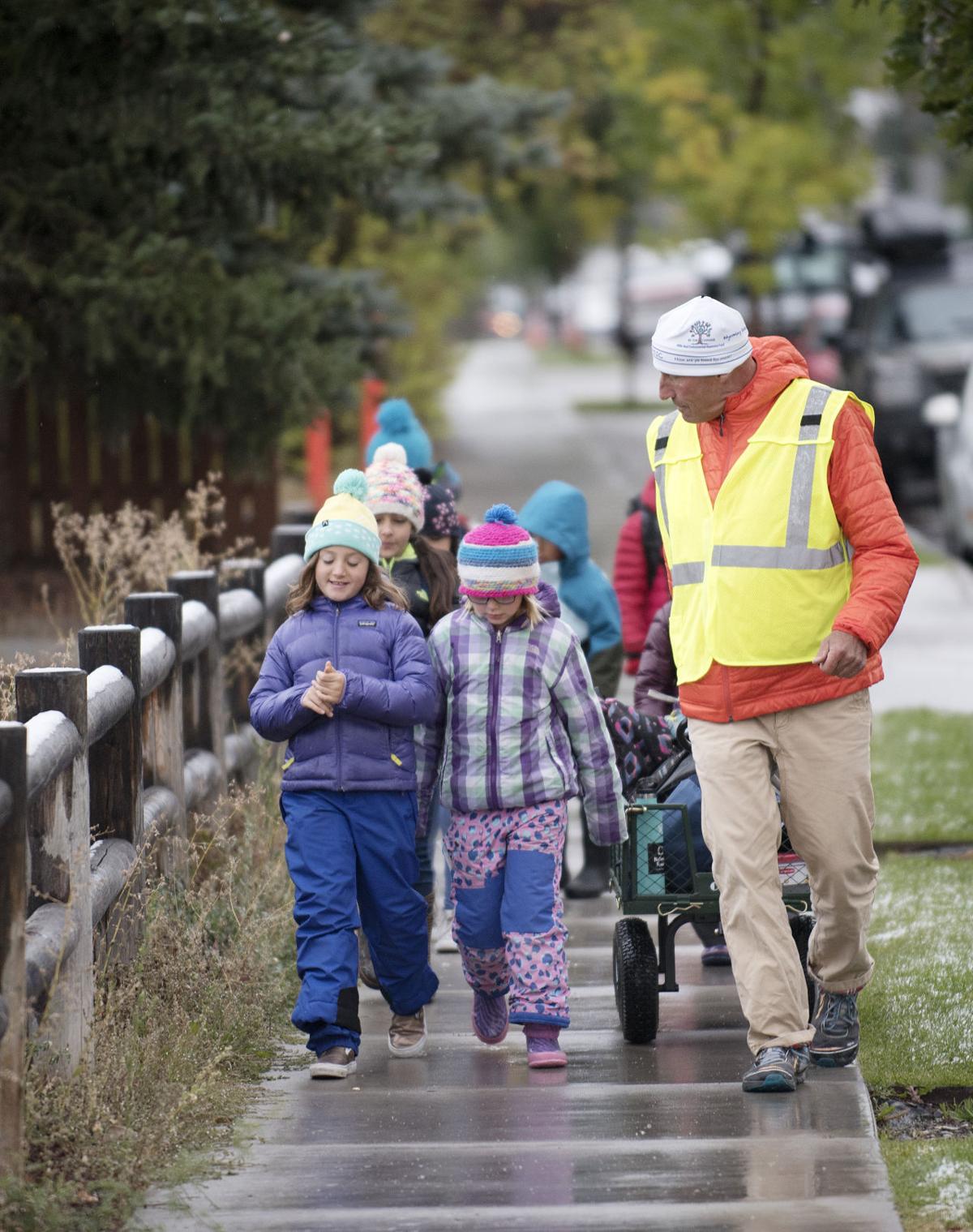 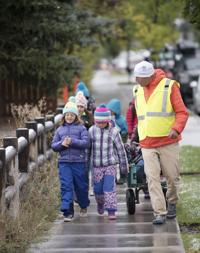 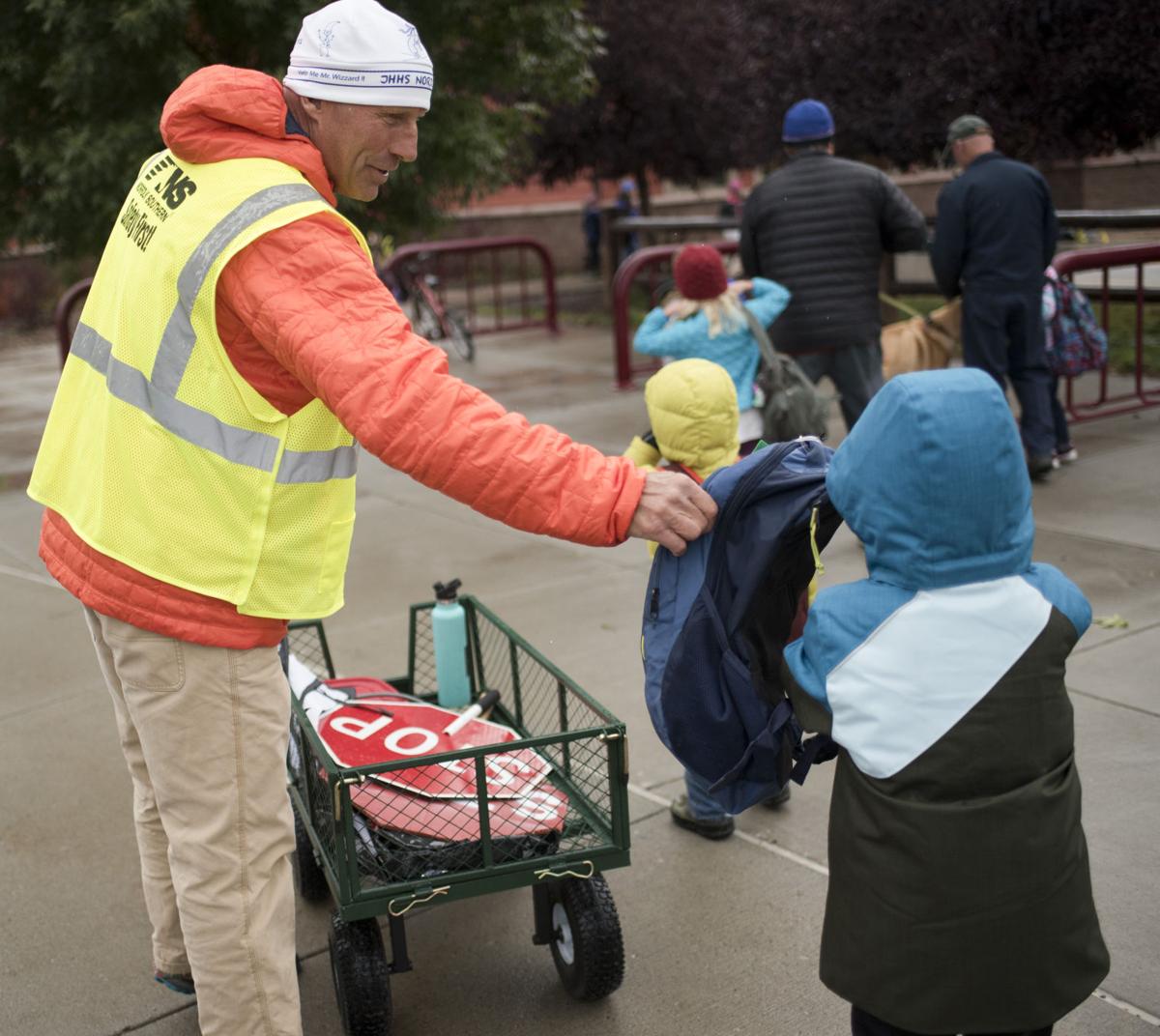 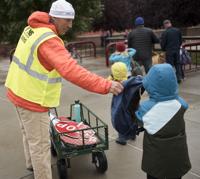 Berling unloads backpacks from his wagon for students after arriving at Jackson Elementary School. The walking bus route was a pilot program meant to run through September, but school transportation officials are meeting to decide whether to keep it through Thanksgiving. 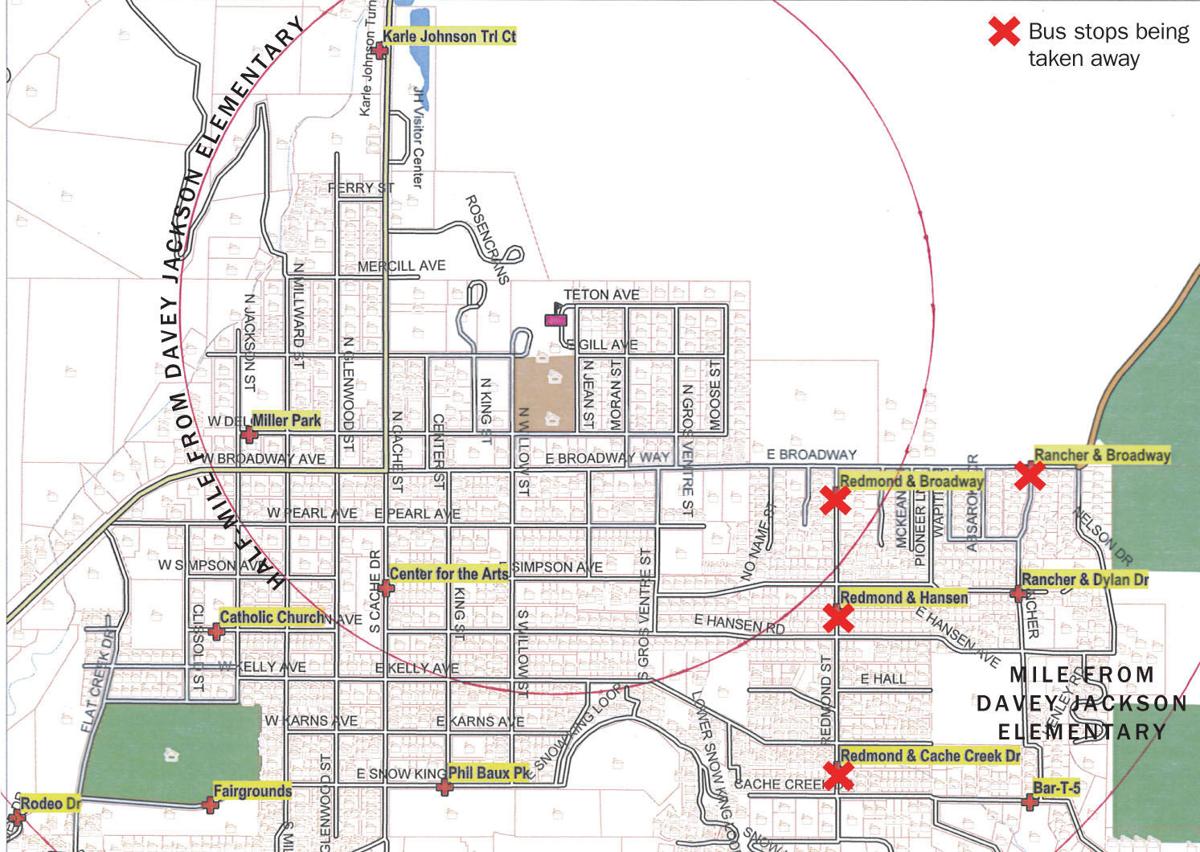 Jackson Elementary School will become kindergarten through fifth grade this year. In response to older students attending the school and more sidewalks in town, the four bus stops marked with red X’s on this map have been eliminated and a “walking school bus” will take their place — at least this fall.

Berling unloads backpacks from his wagon for students after arriving at Jackson Elementary School. The walking bus route was a pilot program meant to run through September, but school transportation officials are meeting to decide whether to keep it through Thanksgiving.

Jackson Elementary School will become kindergarten through fifth grade this year. In response to older students attending the school and more sidewalks in town, the four bus stops marked with red X’s on this map have been eliminated and a “walking school bus” will take their place — at least this fall.

After removing some bus stops this year Teton County School District No. 1 is trying a new pilot program. Adult supervision, plus a wagon for heavy backpacks, helps students and families walk to and from the downtown school safely.

It’s called a “bus” because students are “picked up” at designated stops and then walked to school along a route that would otherwise be driven.

It is the first district in the state to give it a try, but walking school buses are used around the nation. Boulder, Colorado, notably, has at least six walking bus routes.

Friends of Pathways and Jackson Hole Community Pathways support the project. Lauren Dickey, education director of Friends of Pathways, said it’s a good alternative to driving to school and highlights how important it is to move forward with additional sidewalk projects.

Wyoming law states that when it is safe students within 1 mile of an elementary school, 1.5 miles of a middle school and 2 miles of a high school should walk.

Transportation outside those zones is funded by the state. But if a school board decides it isn’t safe for students to walk, exceptions can be granted and the state will continue to reimburse.

The school board recently decided to reconfigure Colter and Jackson Elementary schools. Colter, which used to have students in grades three through five, now also has kindergartners and other younger students. As a result three bus stops close to the school were added.

Because Jackson Elementary, formerly a K-2 school, now has older students, four stops within its area were removed.

The removal of four East Jackson bus stops affected approximately 45 students. The district said there are about 100 students who can participate in the walking school bus program route.

Walt Berling, a former teacher and coach for the school district for a combined 36 years, greets the students on his “bus” route every morning. Three weeks in, Berling said the walking route is going well.

He has noticed that the kids have become “really well trained” in the art of staying on sidewalks and keeping on task.

Berling wears an orange Patagonia puffy jacket in the morning, complete with a yellow safety vest to draw extra attention to the kids.

“I bought this just for this job,” he laughed, gesturing to his coat.

As with any new program, there are challenges.

“The morning is great,” Berling said. “But in the afternoon it’s like herding turtles.”

The route starts at Redmond Street and Cache Creek Drive, traveling north along Redmond to Broadway. After crossing Broadway with a guard it continues west to Willow Street and zags north to Jackson Elementary School. The process is reversed in the afternoon.

There’s no denying that kids will be kids. Students walked on log planks and jumped off steps to driveways along the route, something that occasionally worried the adult chaperones. They tended to get ahead of Berling at times, but he would gather them before every street crossing.

Dave Hunt walked his two daughters, Audrey and Ellie, to school Monday with their dog, Tucker. They usually bike to school — which is faster, Hunt noted — but he enjoyed walking with his daughters and some of their friends.

“It’s great,” Hunt said, adding the program seems to have taken off.

Finding staff to walk the students hasn’t presented itself as a challenge. Berling is leaving for Africa on Saturday, but substitute bus driver Greg Jackson and volunteer Russ Wood will man the ship. Even Ed Ahlum, the district transportation director, filled in one afternoon last week. He wants to attract more volunteers who can help.

The Wyoming Legislature has talked about transportation being an area for possible budget cuts. Berling received a salary of $1,860 for the month of September, but the cost of the program in future months is unknown.

While that may seem tiny compared with a bus driver costing $50,000 a year and a new bus between $130,000 and $140,000 a year before maintenance, parents still wonder if a safety waiver could be obtained, effectively costing the district nothing.

The transportation department meets this week to determine if it should keep the program running past Thanksgiving, and, if so, how.

“I want this to continue,” Ahlum said. “We’re taking it one step at a time. It’s incremental.”

Ahlum said the transportation team is constantly monitoring and evaluating the program. It was initially supposed to pilot only through the month of September — bringing up concerns of winter weather and safety.

Ahlum said he monitored the sidewalks on Redmond and Broadway this winter. What constitutes safe and unsafe is really up to his judgement, but some parents in the area wonder: How far is too far for a kindergartner to walk, especially in 20-below temperatures?

Ahlum said he has a “winter backup plan” in his “back pocket.” In severe weather, he said, two buses would circle back from another route to pick kids up. The only catch is they would get to school roughly 10 minutes late. It wouldn’t happen every day.

Ahlum also pointed out that a START bus that picks up halfway down Redmond Street could drop children, and their parents, at the public parking lot on East Deloney Avenue and Bruun Boulevard. START, he said, was receptive to the idea.

Ahlum doesn’t believe the school district would put students on the bus with a chaperone but rather would encourage parents to ride with their children.