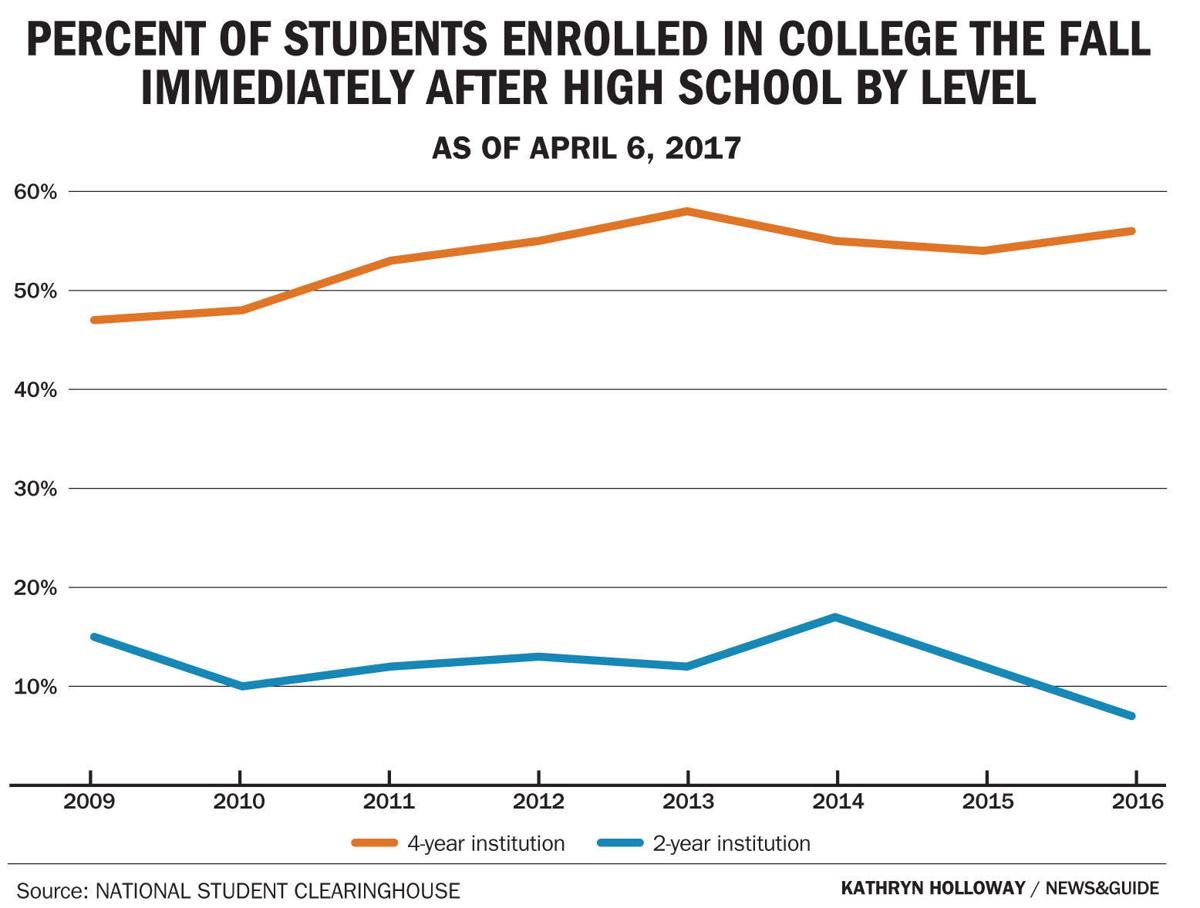 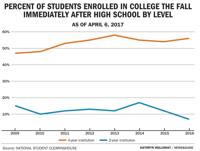 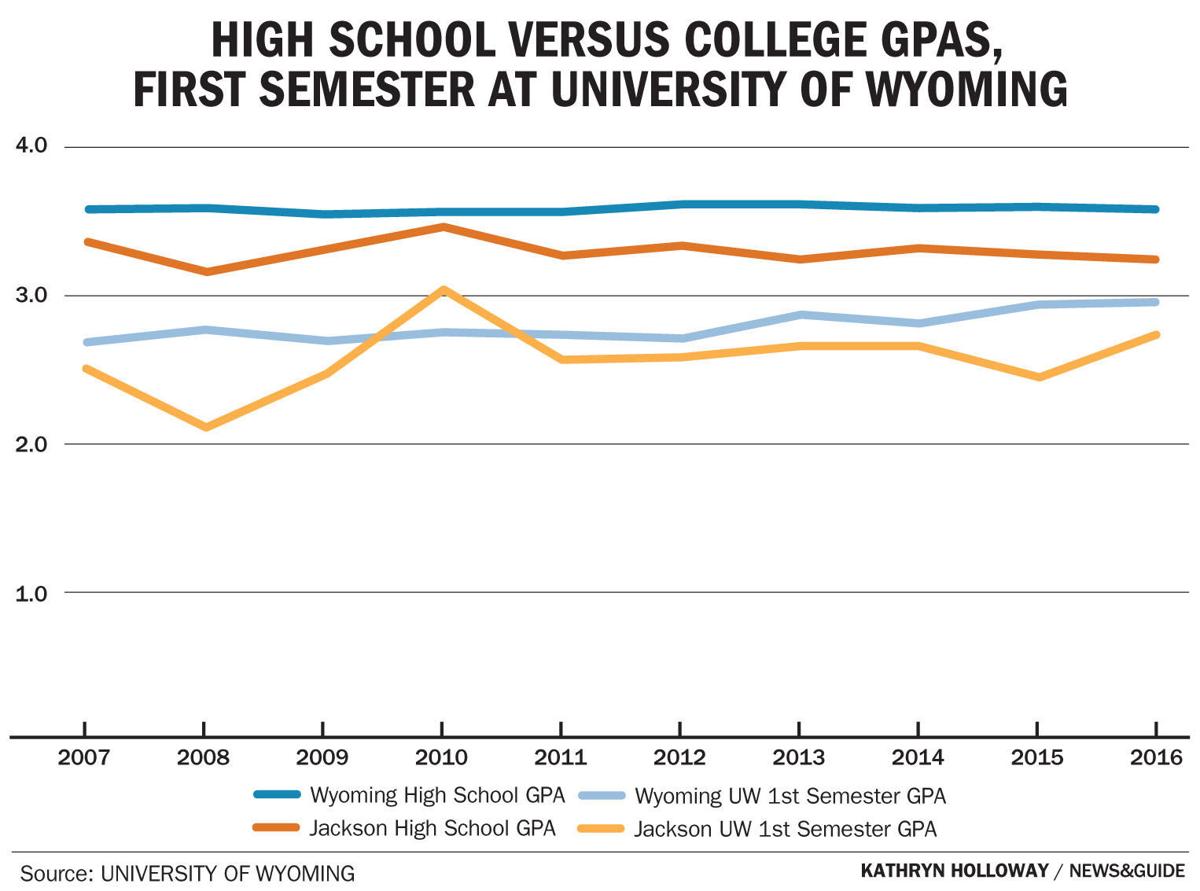 The first semester of college isn’t a cakewalk.

A new report shows that Teton County School District graduates’ path after high school often mirrors national trends. Data that stuck out in the report showed a drop in grade point average between high school and the first semester of college.

But University of Wyoming officials say this happens for most students at UW and at other institutions around the country. Mary Aguayo, the interim associate vice president, said there’s no need to worry about the average of a 0.6 or 0.7 drop in GPA between high school and college.

“We see that pretty much every semester,” she said. “It’s typically a pretty large gap, and it’s pretty normal at other institutions. Students experience that drop in GPA regardless of where they go to school due to new circumstances and a new environment.”

Data since the fall of 2007 shows the dip year after year at UW. There are a number of reasons it occurs, both statewide and nationally, Aguayo said.

College level work is “quite a bit different” than high school, Aguayo said.

“Students in high school often have daily homework grades, many assignments and many tests,” she said. “In a college class, you might have two tests and a paper worth 40 percent of your grade. You might not receive the ability to boost your grades with immediate work.”

College students often need to take much more ownership over their own learning to pull similar grades.

“Students have to do a lot of self study to learn the info and synthesize it,” Aguayo said. “The pace is often a lot faster for students.”

Throw those academic changes into a time of overall life change and grades can slip.

“Students are in a time of huge transition,” Aguayo said. “They’ve moved away from home, and they’re not living with Mom and Dad to get them awake and to class. That’s a pretty big shift for students to take that personal responsibility.”

Aguayo pointed to a larger study at the University of Oklahoma, Norman, which has about 10,000 students but mirrors a similar trend. Incoming freshmen have an average high school GPA of 3.54 but a first semester college GPA of 2.92 — an almost identical gap to what UW sees.

Grades don’t always go up over time — UW’s average student GPA is in the 2.8 range. In the fall of 2015 the average GPA across the institution was a 3.0.

That includes transfer students, who Aguayo said typically do well due to prior credits and coursework. Of the entire UW student population, 42 percent are transfer students who finish their first semester at UW with an average 2.98 GPA.

A study done by the University of Illinois last year indicated that the first-semester GPA is the most influential factor in predicting graduation. The study noted that students who had a 2.84 GPA or above were very likely to go on and graduate, while students with a 2.2 GPA were considered very likely to drop out.

Aguayo said that’s why the university is trying to bring up freshman first- semester grades.

“We are working really hard as an institution to be as supportive of our students as possible,” she said.

In the fall of 2013 the university created an alert system to track freshman students. The system flags poor grades on early quizzes or if a student isn’t attending class. Then the university can follow up on the student through an advisor or someone in the residence halls. That catches problems before it is too late to make grades turn around.

“If this occurs early on in the semester, they’ll have plenty of opportunities to do well in this term and pass the course successfully,” Aguayo said.

Other resources include free tutoring in the courses that first-semester students tend to struggle in, as well as access to tutoring centers for math, writing and oral communications.

The remainder of the report

The report presented to Teton County School District No. 1 board of trustees detailed other information on recent graduates from Jackson Hole High School. Here are more trends and tidbits:

• Since the 2009 school year, 241 graduates of the high school have gone on to the University of Wyoming. Central Wyoming College comes in second, with 65 enrolled from the high school, and Montana State University in Bozeman comes in third with 31 Jackson Hole students since 2009.

• Jackson Hole High School has a graduation rate between 95 and 97 percent.

• Students who stayed in school for a second year, on average: 75 percent.

• Since 2012, a higher percentage of female students returned for their second year of college compared to their male counterparts.

• In 2016, less than 50 percent of graduating male students enrolled in any higher education institution immediately. Roughly 80 percent of females did. Karen Wattenmaker, data and assessment coordinator for Teton County School District, called it a "pretty interesting demographic split" but thinks it might be a one-year trend. "We will be watching future results carefully to identify if there is an issue and if so, how we address it," Wattenmaker said.

• School district officials said they are gathering additional data specific to the Latino student population, with an unspecified release date.

NOTE: Not every school, especially private schools, are required to report data to the National Student Clearinghouse where much of this data was gathered from. Also, no students from Summit High School are included in the report because a small number size that wouldn't mask identity, Wattenmaker said.