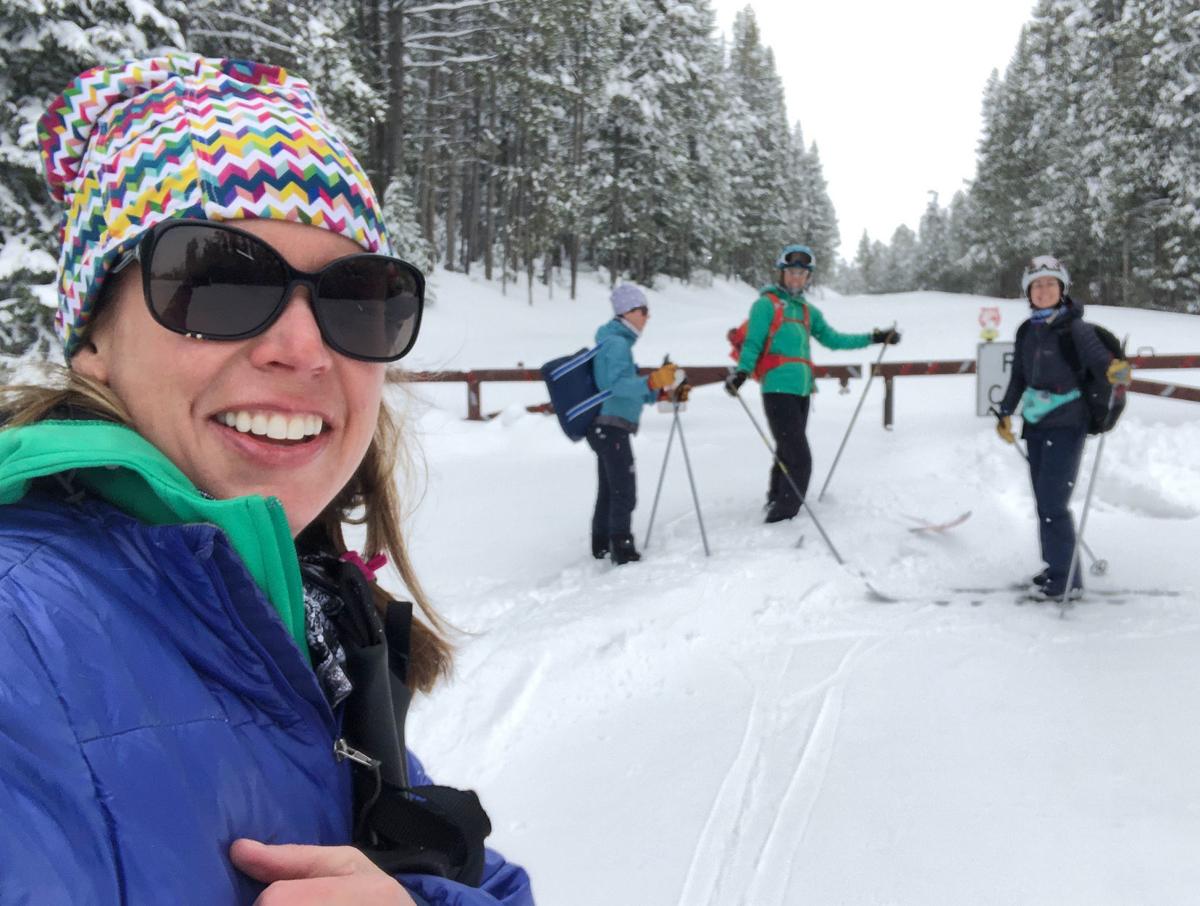 Four women skied from Signal Mountain Lodge to the Taggart Lake trailhead to get back to town when Highway 191 was blocked by a blizzard. 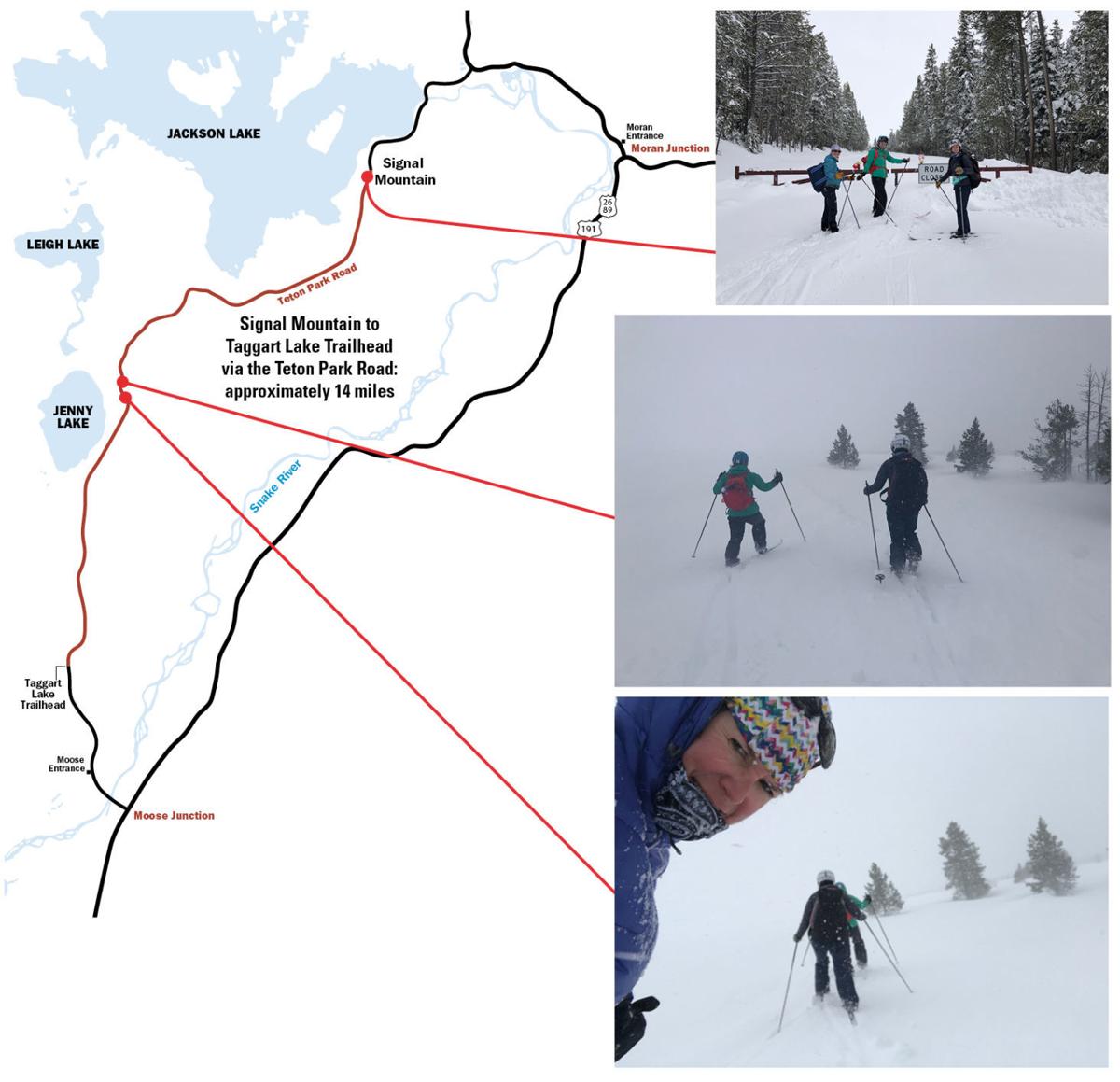 Four women skied from Signal Mountain Lodge to the Taggart Lake trailhead to get back to town when Highway 191 was blocked by a blizzard.

A rare girls weekend for a group of six close-knit Jackson women started out perfectly at Turpin Meadow Ranch but ended with four of them skiing through a blizzard to get home to their families.

The original plan? Leave the kids with the husbands and spend the weekend fat biking and cross-country skiing, bookmarked by some fine wining and dining.

But on Sunday, Feb. 24, the group was faced with some tough decisions when a snowstorm forced Grand Teton National Park officials to close Jackson’s only winter north-to-south thoroughfare, Highway 191.

“Two from our group decided to drive south around by South Pass through Lander and Pinedale,” Carolyn Ripps said. “They ended up getting stuck in Lander because South Pass was closed.”

After driving to Moran on Sunday in a whiteout and realizing the highway would not be reopening anytime soon, Ripps, 36, along with friends Stephanie Thomas, 40, Ali Wheeler, 37, and Juniper Troxel, 44, decided they would rather ski seven hours back than drive seven hours around on roads that might close and leave them even farther from home.

“We called the hotel and got back into our cabin for the night,” Troxel said. “We were actually psyched to stay an extra night and have an Oscars party.”

The women held out hope that the highway would reopen Monday, but as they ate breakfast that morning the general manager of Turpin Meadow came out and announced that the park was not going to clear the road and the choice was to stay or drive the long way back to Jackson.

“I said we could try to bike or ski back, saying it a little bit facetiously,” Ripps said. “Then we realized that was a possibility.”

The women mulled the idea and talked about a plan, their concerns, the risk and the safety measures necessary to complete the 14-mile unplowed trek in blizzard conditions.

“I asked a ranger, and he said chances of the road opening was 1 percent,” Thomas said. “He said if you’re up for the 14-mile ski that’s the sure way to get home. We were worried about not seeing snow poles along the way. But we had extra clothes, food, water, GPS, and our cellphones worked the whole way.”

After packing only the necessities plus some leftover breakfast croissants and Starburst candy, the ladies set out on skis at 11:38 a.m. Monday after leaving their truck at Signal Mountain Lodge.

They decided to follow the Teton Park Road, when they realized they would be able to see the snow markers the whole way.

“When we started off the visibility was fine,” Troxel said. “But we were having to break trail through this heavy, deep snow.”

To keep energy and morale up the four women took turns leading and breaking trail and took water and snack breaks when they felt the need.

“It was just one foot in front of the other,” Ripps said. “I remember joking that it was a lot like childbirth. You know the end is coming and you’ll look back and be happy you did it, but there were periods of really high intensity, a true sufferfest slog.”

The women all agreed that they felt better about cross-country skiing 14 miles in a blizzard than driving 333 miles in one.

“I kept thinking I hadn’t done an adventure like that since my early 20s,” Thomas said.

Thomas, who is a member of Teton County Search and Rescue, was equipped with the Gaia GPS app, which was a surefire way to make sure they didn’t veer off route.

“It was snowing the whole time,” Thomas said. “If it had been groomed, we would have been home in about three and a half hours. But breaking trail was tricky.”

About 10 miles in, right as the group reached Jenny Lake, the wind really picked up. They kept going despite some of them only having makeshift backpacks and no goggles.

“It was so windy at that point we couldn’t talk to each other,” Thomas said.

The women, who have been friends since their 20s and have various jobs in Jackson, canceled meetings and rearranged their schedules before skiing toward town.

They didn’t see any other people along the way.

“It’s like we were the only group in the park that day,” Ripps said. “There aren’t many opportunities to have the park to yourself. There were definitely moments of beauty even though we couldn’t see any mountains.”

Several factors supplied the motivation to undertake the intense and long ski to get back to town.

They had no idea when the highway would reopen (it opened three days later), they had husbands, kids and jobs to get back to and, frankly, it sounded like an adventure to cap a great weekend.

“It’s really not that long of a stretch,” Thomas said. “Some people probably do it every weekend. But it was all the drama that came along with it between the roads being closed and the worried husbands and kids at home.”

At 6:28 p.m. Monday a friend picked the women up when they made it to the Taggart Lake trailhead and drove them to town.

They sipped hot tea they’d been saving since they started the journey nearly seven hours earlier.

With cold fingers and sore feet the ladies reunited with their families at home.

Wheeler ate chicken wings while she took a hot bath. Thomas had a burrito from Pica’s and kissed her kids good night before even putting on dry clothes.

Comments have been removed. Please use your REAL name. See our commenting policy below. - JHNG Producer

Hey News and Guide-how about a cool story about bad&*$ moms who covered double shifts at the hospital last month when the Pass & Canyon closed.

Great, great story. Yes, you still got it. Don’t forget that ever.

what a great/scary adventure... I am super proud of all of you / It would make a great short story