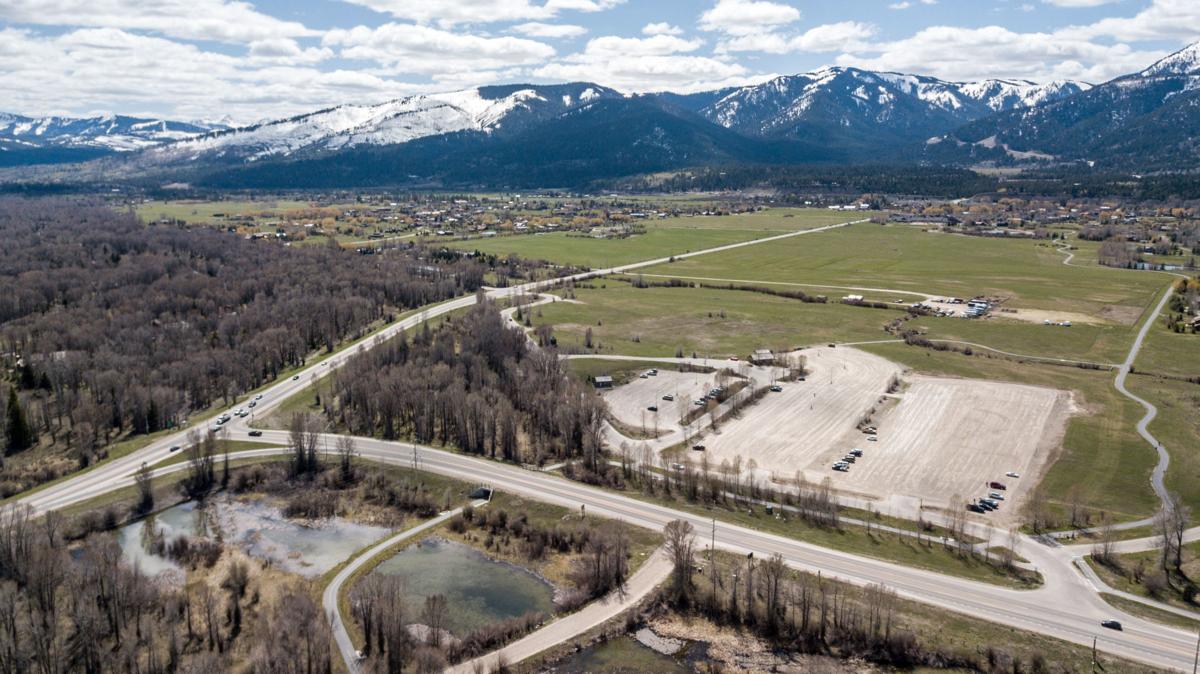 Federal grant money will help transform the Stilson lot at Highways 22 and 390 into a regional transportation hub to serve as home base for park-and-ride-commuter START bus service between Jackson and Teton Valley. The county, Jackson Hole Mountain Resort and their partners were awarded $20 million through a federal BUILD Grant. 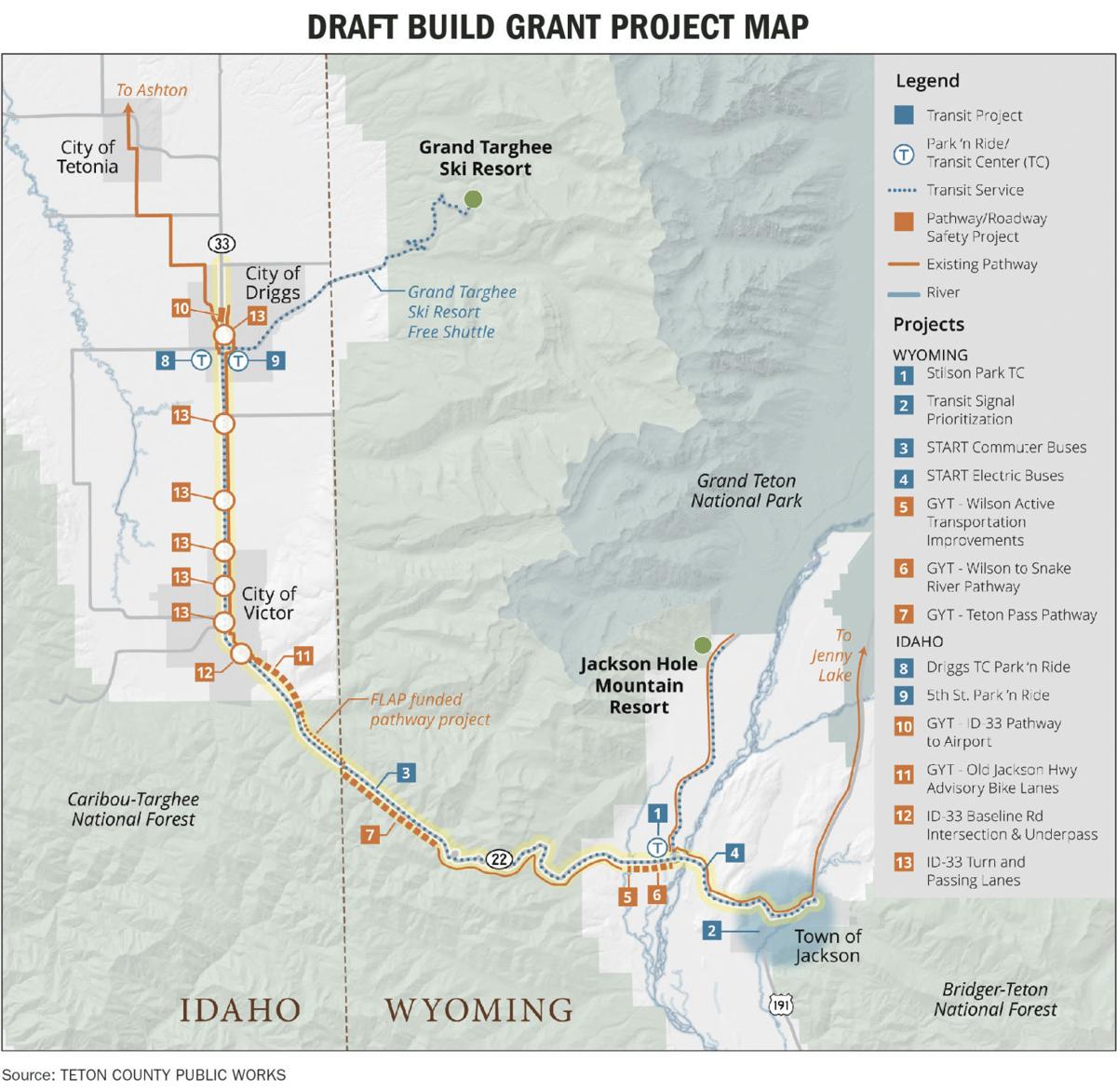 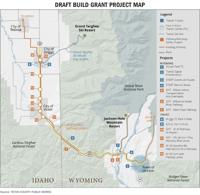 Federal grant money will help transform the Stilson lot at Highways 22 and 390 into a regional transportation hub to serve as home base for park-and-ride-commuter START bus service between Jackson and Teton Valley. The county, Jackson Hole Mountain Resort and their partners were awarded $20 million through a federal BUILD Grant.

The federal government is poised to contribute about $20 million to transportation initiatives in Teton County, but it still might be some time before the public sees that money.

“I believe we’re not going to be spending any money until after September of 2022,” Teton County Director of Public Works Heather Overholser told the News&Guide.

The money in question is grant money the U.S. Department of Transportation awarded last week to Teton County, Jackson Hole Mountain Resort and a number of other partners on the east and west sides of Teton Pass.

All told, the 2020 BUILD — or Better Utilizing Investments to Leverage Development — Transportation Discretionary Grant will fund about $28 million worth of projects, with the local partners — which also include the city of Driggs, Idaho, Teton County, Idaho, and the Idaho Transportation Department — picking up the remaining $8 million or so of the tab.

The goal is to enhance the Wyoming 22-Idaho 33 corridor, providing more access to pathways and public transportation and improving the road system itself.

“We’re trying to make that corridor — Idaho 33/Wyoming 22 — function a little more seamlessly,” Doug Self, the city of Driggs’ Community Development Director, told the News&Guide in May.

That was when the group was first applying for the grant.

The idea is to take cars off the road, cut greenhouse gases and improve efficiency “by making transit an attractive viable mode of transportation and making pathways more viable,” Self said.

Funding will support 13 projects on both sides of Teton Pass, including a Stilson transit center (estimated to cost $8.7 million in the application), upgrading park-and-ride facilities in Driggs (just under $1 million) and adding four commuter buses (around $2.5 million) and two electric buses ($1.8 million) to the START fleet.

Other parts of the plan include construction of a pathway over Teton Pass ($5 million), completing the Wilson-to-Stilson pathway ($1.5 million), and extending the pathway in Driggs to the airport ($325,000). Funds may also be dedicated to improvements that come out of an ongoing study of the Wilson corridor and upgrading roads in Idaho.

Overholser said some administrative work is needed before funds can be deployed, however.

“We will have to deal with all the administrative components of this, and we’ll be putting together probably a grant management plan and committee,” she said.

Funds will not be obligated until the first quarter of 2022, after which many projects will enter a design phase. Construction isn’t planned for most projects until 2023, according to the grant application.

The Wilson-to-Stilson pathway, already approved by the Teton County Board of County Commissioners, has potential to be one of the first projects to move ahead, Overholser said. Work on that project was underway this year but was halted when the County Commission cut its budget because of the COVID-19 pandemic.

“That’s gone through a quite lengthy process so far,” Overholser said. “It was budgeted, and that was something that had to be pulled this year because of the economy.”

What public processes will look like for the BUILD projects also remains to be seen.

“It will depend upon what the requirements are and if it’s a project that needs to go through [the National Environmental Policy Act] and so on,” Overholser said. “That’s all stuff that we need to figure out as part of our grant management plan and what the timeline is for the use of the funds for each project component.”

Commissioner Greg Epstein cautioned that this project is a transportation project, noting that the funds for the Stilson transit center will not be spent on long-sought ballfields in the area. Epstein said a public process for that project would likely focus on the transit center and what amenities the public would like to see in it.

“That’s the conversation,” he said: “We can really turn Stilson into that premiere park and ride that we’ve talked about for so long.

“I mean, it is already a park and ride,” Epstein acknowledged, “but it could be so much more.”