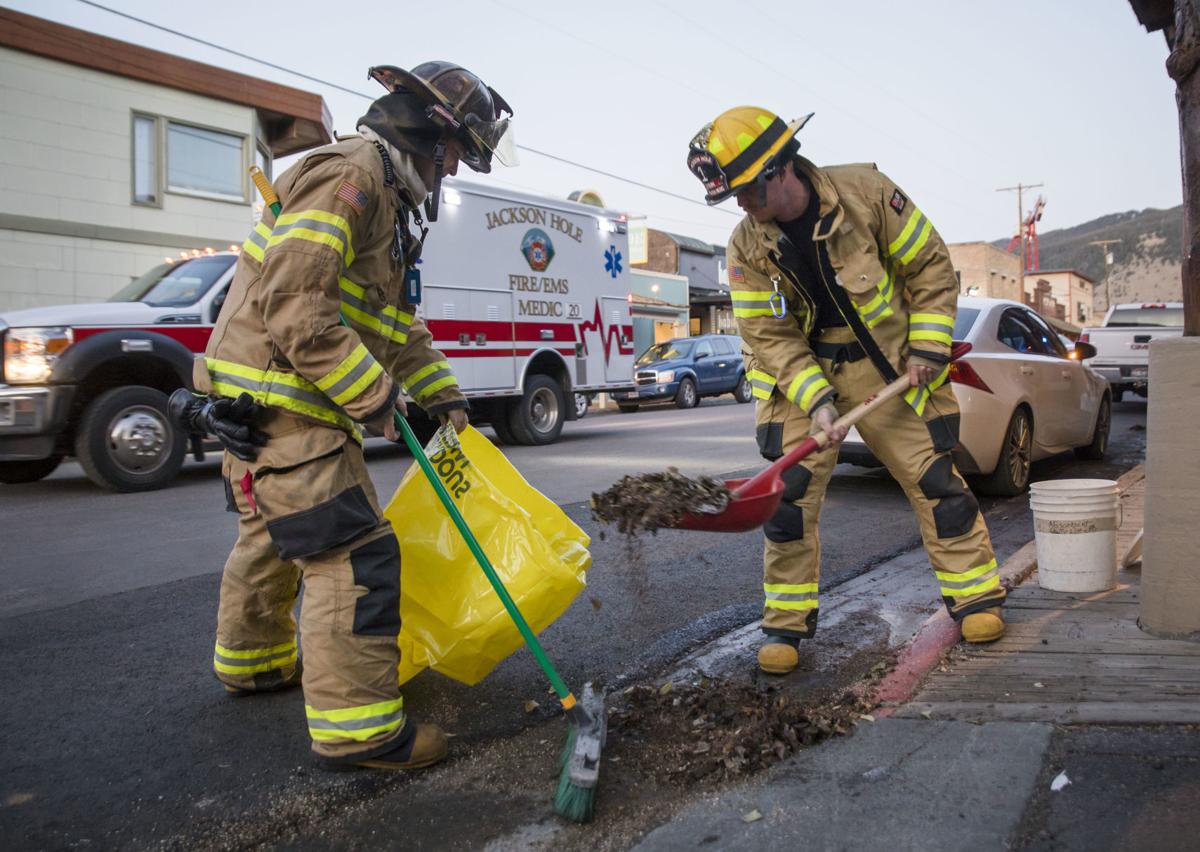 Jackson Hole Fire/EMS firefighter Sam Stein, right, shovels some kitty liter, used to absorb a November gas spill in town square, into a waste bag held by Ben Thurston, left. On Tuesday, the Teton County Board of County Commissioners approved a new policy manual, which sets rules for how employees like Stein and Thurston work, receive benefits and take time off.

Though there may be a hitch or two in implementation, Teton County employees have a new handbook.

In October 2018 a committee was selected to steer the process of overhauling the county employee manual, which had not been completely updated since 2011. On Monday the Teton County Board of County Commissioners voted unanimously to approve the new manual, closing the book on the update.

“It was very arduous,” said Teton County Clerk Sherry Daigle, who was a member of the committee.

“It was a project,” she said, “but I think it’s got the best outcome that it could have had.”

The new handbook drops policies like two focused on telecommuting and tuition reimbursement that aren’t used anymore. It also incorporates other measures approved since 2011.

The vote also approved new policies that afford employees leave options, allow for merit-based salary increases for long-term employees at the end of their salary range, and differentiate benefits and leave time received by full-time and part-time employees.

The decision comes after a process that took over a year to complete and saw elected officials tangle over how to create a policy manual that would equally apply to — and satisfy — employees, department heads and elected officials across the county.

In November 2019 the county attorney’s office issued a legal opinion clarifying its opinion on the commissioners’ ability to “promulgate” personnel policies among the eight departments administered by elected officials.

While commissioners have the ability to create personnel policy for the eight departments they oversee, the opinion stated the board’s authority does not apply across the board.

Gingery said the opinion made officials realize work needed to be done to reach consensus on a set of policies each department could agree to and implement. Some may still go their own way.

Carr had argued against changing how much compensatory time — overtime paid at time-and-a-half in leave rather than cash — employees could bank. He won that fight. The tool is used by the sheriff and fire department to entice employees to fill extra shifts.

The sheriff did not get his way on another issue about how his office compensates detention officers for overtime. Carr’s office now pays those employees overtime after 84 hours, the number of hours regularly scheduled in the department’s 14-day work period. Federal policy sets the threshold for paying law enforcement workers who work the same hours overtime after 86 hours.

Commissioners voted Monday to bring the two sets of policy in line, approving overtime after 86 hours for employees on detention officers’ schedule.

Carr said he wanted to “embrace this county policy so that we’re all unified.” But pending what the final manual looks like, he suggested his office might “deviate” from specifics like the overtime policy in question. Carr didn’t want to make detention officers work more before being paid overtime and didn’t want to change schedules because it might force him to hire more employees.

“An umbrella policy for the entire county — it’s a very good guideline for our employees to know where they stand in the county and to be a part of that,” Carr said. “But at the same time, there might be areas in which we deviate because I feel strongly that we need to deviate from what those policies are in order to accomplish our goal.”

Daigle said if someone deviated from a policy like the one Carr focused on, it could be a headache for her department, which administers payroll.

“It could cause some issues for administration as far as what rules do you follow when and for whom,” the clerk said.

Though this part of the process is complete, the policies are not set in stone.

Chairwoman Natalia D. Macker was interested in updating policies as needed to avoid the burden of a major overhaul like the one just completed. Daigle supported that idea. They described the handbook as a “living document.”

“The time it took to do such a large overhaul was intensive,” Macker said. “We needed to do it, and I’m pleased to have done it and I think that it doesn’t need to be as big of a lift in the future if we keep it regularly up to date.”