More traffic during the shoulder and winter seasons has contributed to higher overall traffic levels. 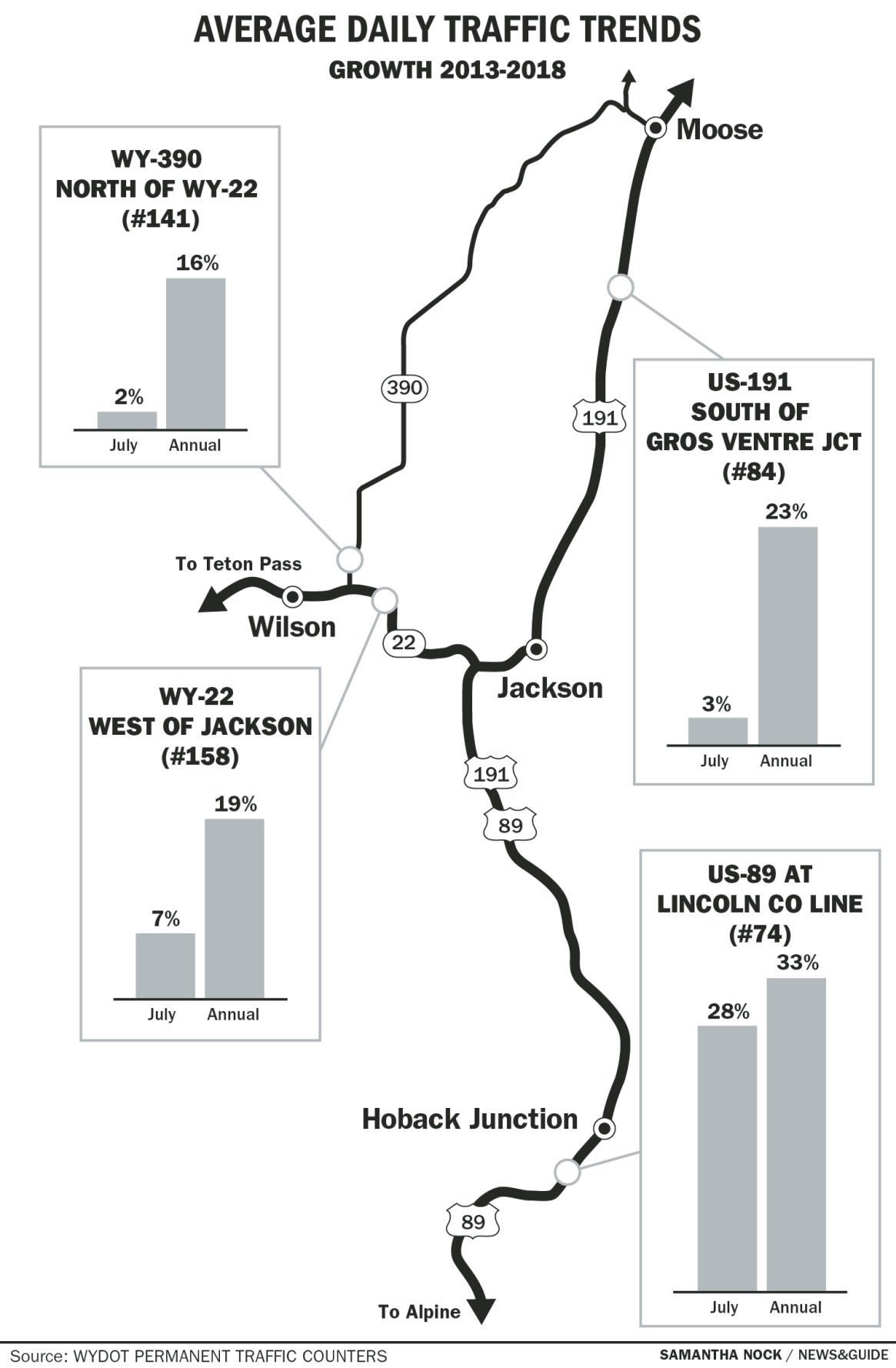 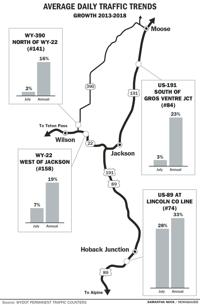 More traffic during the shoulder and winter seasons has contributed to higher overall traffic levels.

Increasing summer traffic on South Highway 89 is evidence, and a warning, that widening highways won’t solve congestion, at least according to the transportation consultant hired by the town and county.

Elected officials hired Jim Charlier, a mountain town transportation guru, to study the town and county’s progress on the 2015 Integrated Transportation Plan. His firm, Charlier Associates, was also hired to drafted the initial plan, which lays out a blueprint for moving people around the valley efficiently with an emphasis on multimodal transport, like biking and busing.

Growth in winter and offseasons

During the same period, the overall annual traffic is increasing much quicker: 16% on Highway 390, 19% on Highway 22 and 23% on North 89. That, he said, indicates traffic growth is occurring in the winter and shoulder seasons.

The outlier is South Highway 89, which the Wyoming Department of Transportation is widening to five lanes south to Hoback. On that stretch, traffic levels rose 28% in July from 2013 to 2018, and 33% overall between 2013 and 2018.

“That’s local proof of the concept that widening highways in the face of a lot of latent demand for travel is just going to generate traffic,” Charlier told town and county officials last week. “We’re seeing in that corridor what happens when we respond to traffic growth by increasing the capacity of the corridor.”

It’s a lesson, he said, that “urgently” applies to the ongoing discussion about what to do with Highway 22.

“If you stop widening your arterial roads, they’ll get more congested and they’ll reach a point like your summer roads have now, where they discourage people from driving,” Charlier said. “You reach a point where you’re sort of full. The hotels are at high occupancy, the hotel prices are high, there’s a lot of people up there in the parks and the roads are full. That is constraining growth. There’s a lesson there.

“Twenty-two is a classic example of the potential to make a big mistake,” he said, “which is to widen the highway for general purpose traffic believing we’re going to solve the congestion problem, when actually we’re just going to make it worse.”

WYDOT is in the midst of planning a 2023 revamp of the Snake River bridge to Wilson and the Highway 22/390 intersection. In the plans are a four-lane bridge and intersection configuration, which some locals worry predetermines a four-lane highway all the way into town.

Although the town and county’s Integrated Transportation Plan calls for carpool or bus lanes on Highway 22, a transit study recently commissioned by WYDOT recommended against such lanes for the upcoming intersection and bridge project.

Figuring out Highway 22, Charlier said, should be top priority for the town and county as WYDOT breaks off pieces of the project, starting with the “Y” intersection in 2017, followed by plans for the Highway 22/390 intersection and Snake River bridge.

“We’re going to have to get serious about: what should the future of 22 be?” he said.

“That’s pretty shocking in a number of ways,” Town Councilor Jonathan Schechter said. “What it suggests to me is that we are going to be forever chasing our tail and never making progress, or making progress around the margins at best.”

Charlier replied: “If your goal is reducing traffic, your expectations are going to be dashed. The only thing that’s going to do that is a major recession.”

But County Commissioner Mark Barron said increased traffic can be attributed to more than low gas prices and more pavement.

“We obviously aren’t zoning enough workforce housing,” he said. “Our workforce is moving over the mountains and down the valley.”

Transit is the “low hanging fruit” said commissioner Mark Newcomb, who suggested identifying points where a threshold of people are traveling daily.

The list of items yet to be completed include the development of a transportation demand management plan — designed to “get the most out of the money you do invest in transportation,” Charlier said — and work on a regional transportation planning organization that would coordinate with partners like neighboring counties and WYDOT.

“A lot of the action plan in the ITP has not been implemented,” Charlier said. “We need to have somebody working on that full time.”

He also suggested the town, county and other local entities repair their “frayed” relationships and commit to working together. As examples he pointed to the county funding increased summer START bus service to the Village while the town declined to fund the service and controversy over Teton Village’s program of providing bus passes to employees as examples.

He did, however, commend Jackson’s progress on pathway connectivity, calling the system “one of the nation’s most remarkable” networks, and suggested shifting strategies to rely more on bikes and e-bikes to reduce traffic.

The town and county have not yet scheduled meetings to discuss updates to the ITP.