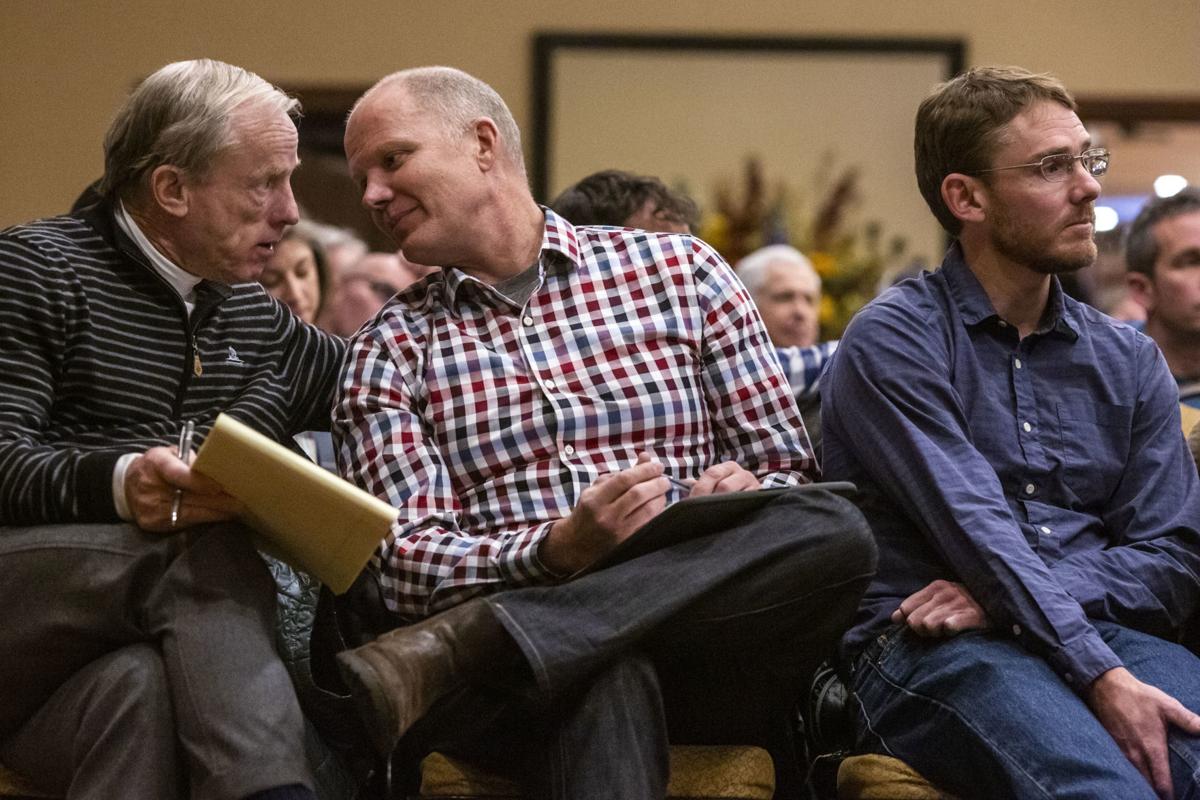 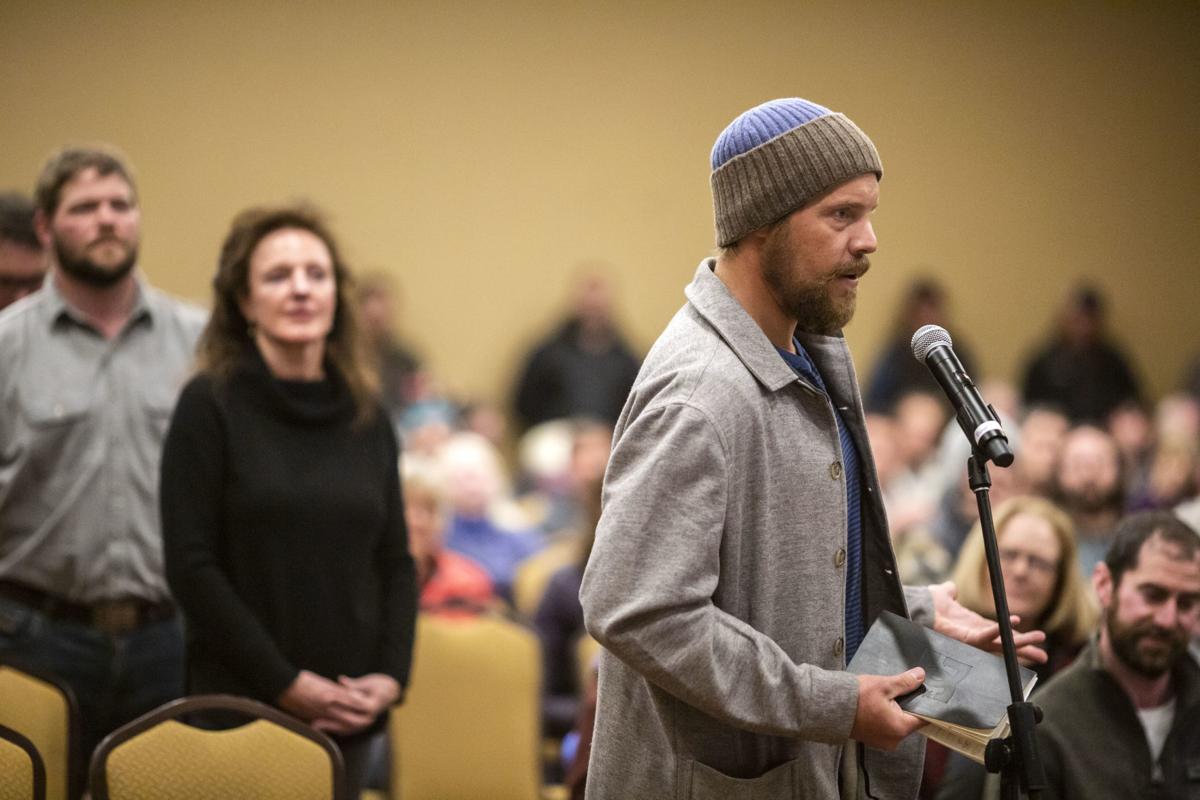 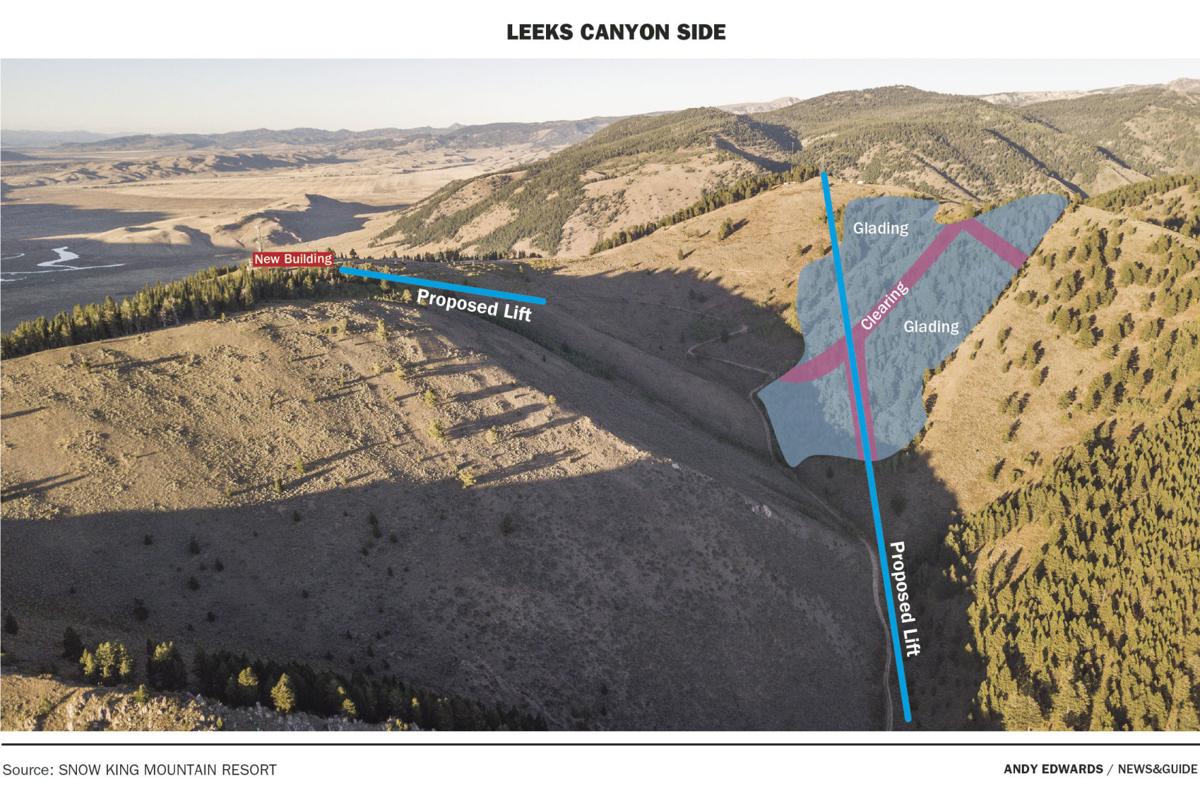 Proposed improvements to Snow King Mountain’s town-facing north side include eight new cuts in the forest to accommodate ski runs, boundary expansions to the east and west, a gondola and a top-to-bottom zip line above the bootpack where the Summit chairlift runs (already rejected).

The debate about one of the most contentious development issues facing the town in years came to a head Tuesday night, when more than 200 people packed a conference center to weigh in on Snow King’s future.

This beast of a public meeting served as the main opportunity for residents to let the Town Council know how they feel about the mountain resort’s slew of proposals, as the elected officials prepare to decide on the future of the Town Hill. Max Chapman, the resort’s owner, made a plea to the council to sign off on a revised master plan.

“I think we all agree at this point it’s time to make a decision,” Chapman said, “and hopefully through this process we’ll learn what the issues are.”

A common theme among those skeptical of Snow King’s plan, however, was the feeling that the process is being rushed. Many people suggested the town wait until the U.S. Forest Service completes its side of the review and releases an environmental impact statement early in 2019.

“I do think that the council … should take their time with this evaluation,” said John Reed, “because this will be a permanent decision.”

During the 5-hour meeting, opposition and support for Snow King’s plan ran the gamut, from those who accept it wholesale to those who would prefer development on the Town Hill be frozen in time or even reversed.

From the start the most controversial aspects of the plan have been a proposed zip line, boundary expansion and road to the summit, and many objectors touched on each, with the common concern that the master plan changes would lead to Disneyfication of the King.

Jim Harold, who served on a recreation district board in Lake Tahoe that managed California’s Diamond Peak, recalled being in the council’s position several years ago. He said he heard the same arguments about the resort becoming an amusement park. But after researching ski area business models around the country, he came to a different conclusion.

In other cases, however, small ski areas have survived without serious expansion. Bridgid Mander said that at Howelsen Hill in Steamboat, Colorado, the town now foots the bill for the hill. She and several others said they’d be happy to put the public money toward preserving Snow King as it is.

“They protected what they value,” Mander said of Steamboat, “and so should we.”

Some commenters took aim at the Snow King investors and developers, accusing them of trying to “pull the wool over our eyes.”

One of those commenters strolled up to the microphone in a bighorn sheep costume. He removed the head to reveal himself as Andrew Jakovac, a man who believes approving the master plan is a “baaaaaad idea.” He argued the plan would open the door for further hotel and condo development, exacerbating housing and wage problems.

“There are no hidden plans,” Stanley said. “We don’t have any secret pocketbook ... for developing hotels and condos. We simply focus on what to do with the ski area and how to make it better.”

“There used to be a time in this community when we came together to support Snow King Mountain,” Barron said, “and we didn’t look at the owners like the big fat boogeymen. They were our friends, and they were our neighbors.”

A handful of people said the town is “blessed” to have a “generous” owner who is willing to funnel millions into Snow King. And that’s what Chapman said his goal is.

“We want to invest in the mountain for the benefit of this community,” he said. “That’s what we’re trying to do. I sincerely hope this council will take advantage of this opportunity.”

Snow King leaders have long said they lose money each year running the ski lifts and need new sources of revenue to remain viable. The primary funding stream, they said, would be the proposed zip line, which would help to pay for much of the rest of their proposals.

One of the other major elements of the plan is a gondola to replace the aging summit lift. Travis Rice, a professional snowboarder who learned his trade on Snow King and through the Jackson Hole Ski and Snowboard Club, said the mountain is in dire need of renovation.

“What we have up there is an incredible opportunity, and it’s literally rusting away,” he said. “It’s barely changed since I was a kid.”

Even many opponents are on board with some new developments, like a gondola. But they counter that the sacrifices entailed in the master plan would ruin what the Town Hill represents to them: a backyard refuge in unadorned nature.

“I can’t even imagine the idea of expanding Snow King,” said a woman who identified herself only as Abigail. “It is really unfortunate that in order to find peace and quiet and views of wildlife I will have to drive 30 minutes into the national park, 20 to 30 minutes off the pass, or 20 to 40 minutes into the Gros Ventre.”

Several people brought up the Snow King Resort Master Association, a little-known group meant to function as an HOA for the resort district. Geneva Chong, who was part of the stakeholder group that reviewed Snow King’s proposals earlier this year, said SKRMA should still be held to account for funding the ski area, as many have argued the original master plan requires.

“I feel strongly that before large concessions are made by the town,” Chong said, that [SKRMA] is fully in place.”

Others noted that in the master plan from 2000, the town granted Snow King hundreds of thousands of square feet of development, and that this should allow it to be profitable already. Skye Schell, executive director of the Jackson Hole Conservation Alliance, argues the entire master plan is truly a matter of real estate, and that saying it’s about skiing and community benefit is disingenuous.

“Until the developers will come to the table in good faith,” he said in his written comment, “and agree to carry out their existing responsibilities, we just don’t see how you can have negotiations that are fair to the town.”

A central question in the debate over Snow King’s future is whether the “gives and gets” balance out — that is, if the resort is offering enough in exchange for permission to build what it wants on the mountain. Obviously, opinions vary.

Anna Olson, the president of the Jackson Hole Chamber of Commerce, said the organization believes it’s a fair trade, with the resort offering to build housing for employees, conduct a transportation demand management study and, as she put it, ensure “a predictable future for Snow King.

“We tend to get hung up on the emotional stuff,” she said, “but … we believe at the chamber what they’re offering is a very, very good deal.”

Jeff Golightly, vice president of Gardner Capital, the company that owns Snow King, thanked the massive crowd for their feedback.

“Regardless of the position you have,” he said, “we are completely humbled by your engagement, your care, your passion about the Town Hill.”

Without getting deep in the weeds on the JHNG website, I encourage all who are interested in the future of SK to get DEEPLY informed, as the decision to grant the applicants what they are proposing would be irreversible. As noted in the article, don't be emotional, be informed about the consequences in every direction.