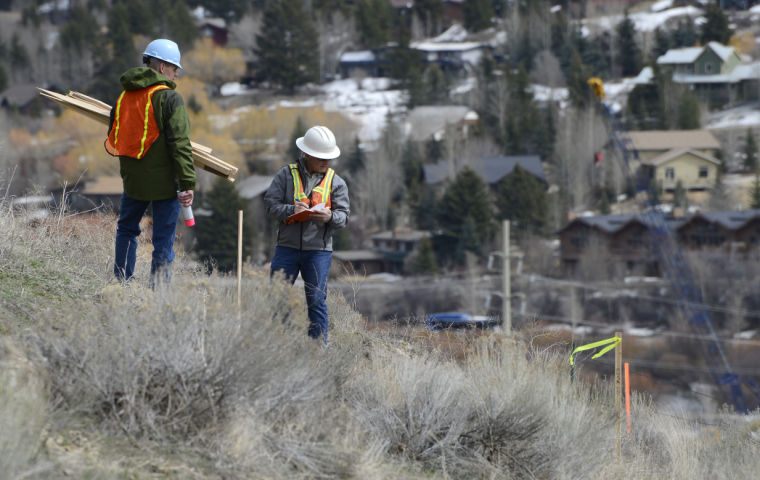 Geotechnical engineer Ray Womack, right, records the position of stakes placed in the ground on Budge Drive to serve as data points for measuring movement while officials determine a plan of action for the neighborhood. 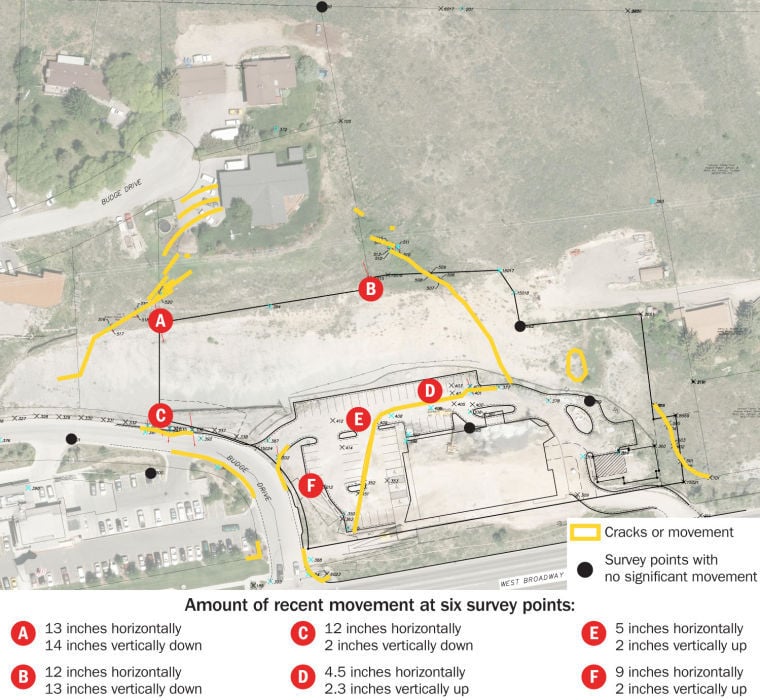 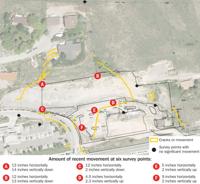 The map above shows documented ground movement of the East Gros Ventre Butte landslide. The time span of the movement is unclear, as engineers began tracking the points at different times. Town officials did not have the time frame at a public meeting this week, but said the movement is recent. 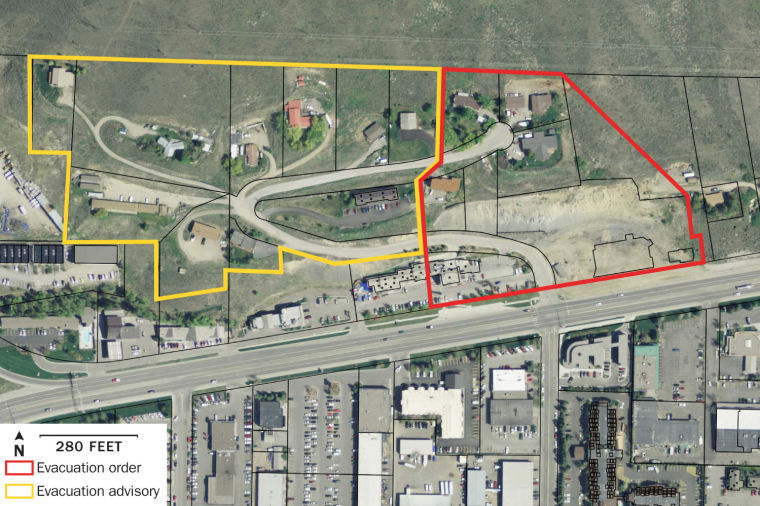 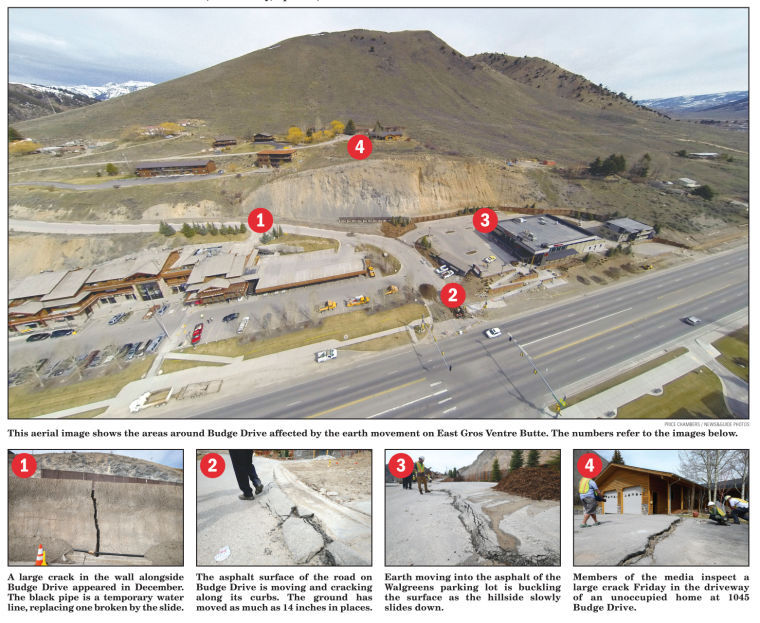 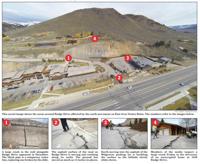 Geotechnical engineer Ray Womack, right, records the position of stakes placed in the ground on Budge Drive to serve as data points for measuring movement while officials determine a plan of action for the neighborhood.

The map above shows documented ground movement of the East Gros Ventre Butte landslide. The time span of the movement is unclear, as engineers began tracking the points at different times. Town officials did not have the time frame at a public meeting this week, but said the movement is recent.

Human activity has contributed to the East Gros Ventre Butte landslide that in the past week has displaced nearly 60 residents and cost taxpayers at least $750,000, a consultant says.

The area around the slide has been the site of grading and construction over the decades, including construction of Budge Drive and grading of Highway 191 itself. Recent development may have been a catalyst, Landslide Technology engineer George Machan said.

“It appears that there were some activities out there in the last few years that probably contributed to its moving,” Machan told the Jackson Town Council last week. “It’s not just nature by itself causing it.”

Exactly which activities are most culpable is difficult to determine at this point, authorities say.

The most recent activity was the construction of a new Walgreens last year. The pharmacy, which sits directly below an arching crack in the butte, received a certificate of occupancy from the town in December and opened its doors in January.

The town approved grading for the site multiple times, based on geotechnical analyses of the butte.

There also was a 200,000 gallon water leak at the house above the pharmacy in 2011, officials said. Geological activity probably caused the leak in the first place, they said.

The level of concern at the town appears to have escalated quickly in the last week and a half. Ground movements caused water pipes to break near the pharmacy April 4. Town officials say that was one of the first signs that the magnitude of the movement may be greater than previously believed.

With signs of the butte’s instability growing, including cracks in the earth and buckled pavement, the Walgreens was closed April 9. The same day an evacuation order shocked Budge Drive residents who had to hastily leave their homes that evening with backpacks full of their belongings.

While the question of who may be at fault has been a topic of conversation throughout the valley since then, some at the town say now is not the time to point fingers.

“The fact of the matter is in an event like this we’re going to spend the next months and years, and there’s going to be insurance adjusters, judges, juries and lawyers involved. We all know that,” Town Manager Bob McLaurin said at a meeting this week.

“At this point I’m not prepared to say it was the town’s road or the Walgreens or it was the Hillside Building or it was something up on the hill. That judgement is going to be left up to others.”

On Tuesday crews disconnected a municipal pump station next to the Walgreens that has been slowly moving downhill and received “significant damage” Monday night. The town’s greatest fear at this point is that the slide could break the water main beneath West Broadway that supplies about a third of Jackson with water.

The slide continues to move about an inch per day.

Taking the pump station offline is supposed to relieve pressure on the water main. A break would drain 2 million gallons of water into the street in about 30 minutes, town engineers say.

Removing the pump station also greatly reduces water pressure for those residents attempting to remain home on the butte. Authorities closed the entrance to Budge Drive this week, meaning people who want to return to their homes must cross private land. Before the closure, residents could return home with a law enforcement escort.

Machan has described the slide as slow moving. He somewhat reassured residents last week by saying there’s less than a 5 percent chance that it will catastrophically fail.

But it could become a long-term problem.

Work is supposed to begin today on a massive weight that could slow the upward movement of the slide’s “toe.”

Officials describe the slide as a block that is slowly rotating. As the top sinks, the bottom pushes out and up.

That upward force has already cracked and distorted Budge Drive and much of the Walgreens parking lot and has affected the pumphouse.

The Jackson Town Council agreed Monday night to allot $750,000 to continue monitoring the slide and to build the weight, which they are calling a buttress. There was also talk of removing earth from the top of the cliff, which is another way to counterbalance the slide. That would require approval from the homeowner.

The buttress will be erected on Budge Drive and, if permission is granted, on the pharmacy’s lot.

Authorities have acknowledged that development over the years cut away at the bottom of the hill and contributed to the slide.

The construction of Budge Drive required cutting the slope, but the town couldn’t say exactly when or how much because the project pre-dates the “permit database records.”

Town officials talked about oldtimers who say Broadway itself, also known as U.S. 191, used to be higher than it is now. It was perhaps as much as 20 feet higher but has been graded down over the years.

The new Walgreens, which sits at the toe of the slide just beneath a steep cliff, is the most recent development that has taken place on the butte.

The pharmacy opened at the beginning of this year, after the project was approved based on geotechnical reports conducted by Ray Womack and Womack and Associates.

Macham, speaking after a public meeting last week to homeowners who live directly above the slide, said that “excavation down here looks like it destabilized the slide,” while he pointed at the base of the cut bank.

One of the landowners described seeing cracks in the ground two months after the Walgreens development began in 2013.

He asked Macham if the development may have caused the cracks.

“It looks like that destabilized it, what they did,” Macham said.

A conditional-use permit approved by the Jackson Town Council in March 2011 allowed the property to be lowered by 8 feet. The land was owned by Mountain Partners LLC and Terry Ray at the time. Ray would not comment for this story.

In December 2012, the council approved an amendment to the permit to allow the site to be graded closer to the cut bank. Bencor Inc., of Colorado Springs, Colo., the current property owner and a developer that specializes in building Walgreens, applied for that amendment.

The approvals were made based on Womack’s geotechnical reports and consulting. Womack is still being paid by the town to monitor the slide.

His firm is now a part of Jorgensen Associates. The town is paying about $3,600 per day for Womack and engineers from Jorgensen to consult and survey ground movement. A previous estimate from the town finance director put that number at $12,000.

The town first started noticing ground movement over a year ago, McLaurin said.

Jackson/Teton County Joint Planning Director Tyler Sinclair said at a meeting this week that the magnitude of the ground movement wasn’t known until “the last week or so.”

“The conclusion that this was actually a larger event, a landslide, was pretty recent knowledge,” Sinclair said.

Since the development of the Walgreens site, rockfall could regularly be seen and heard on the cliff from the parking lot.

Bencor recognized that problem as early as March 2013. Bencor asked in December for a minor deviation to the Walgreens development plan to allow for a rockfall net to be draped across the slope.

There’s a difference between rocks scaling off the cliff and a landside, Sinclair said.

However, in the December approval letter for the rockfall net, Sinclair noted that “the town understands that beyond the release of surface material off the hillside, some subsurface ground movements have been discovered.”

In the letter he “strongly” recommended Bencor put “systems in place to continually assess possible impacts which may be created from subsurface ground disturbances.”

The town was also made aware of a 200,000 gallon water leak in 2011 at the house above the pharmacy. Homeowners Jeremy and Sara Budge have not returned calls for comment.

The house appears to be on the very edge of the slide and has born the brunt of its destructive force thus far. It sits on top of a crack that continues to grow.

The News&Guide was denied entry to the residency, but the town says the house is being torn apart.

A scarp face that traverses the property is visible in the driveway and continues to grow by the inch.

Town officials first publicly confirmed they were monitoring ground movement on the butte in December, but wouldn’t give details.

At the time, rockfall was regularly reported at Walgreens. Tim MacDonald, who works in real estate acquisitions for Bencor, has not returned calls for comment.

Bencor listed the property for $13 million in the News&Guide last year.

A resident who lives on the butte first noticed a crack in the concrete barrier wall of Budge Drive in December. The crack continues to grow, according to those monitoring the slide.

Several subterranean fault lines crisscross the area in question. One traces along the southern base of the butte and another runs north up its face, according to a geological map of Grand Teton National Park and Teton County by J.D. Love et al.

— Michael Polhamus contributed to this story.