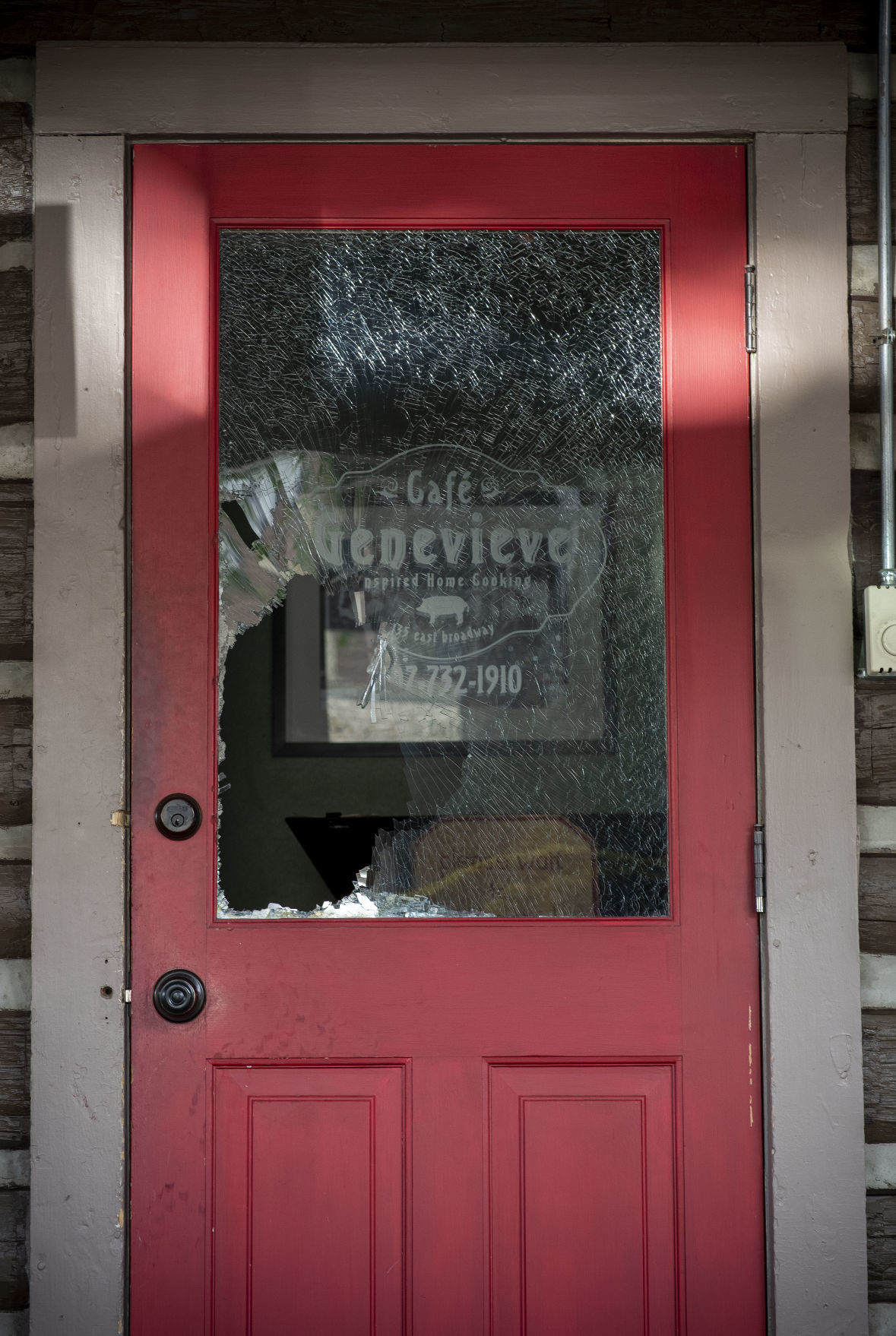 The Jackson Police Department broke the front window at Cafe Genevieve in the early morning hours Tuesday to gain entry during a fire. No one was in the building at the time, and firefighters were able to save most of the structure. 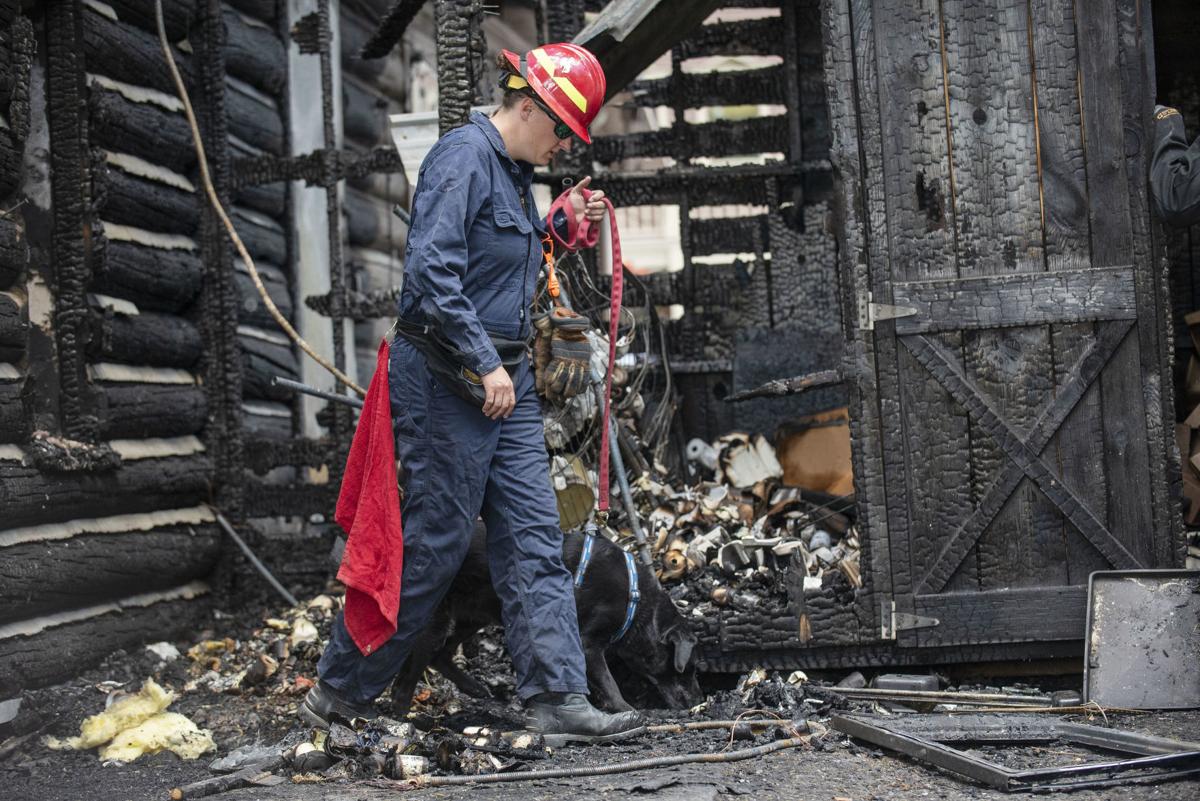 Stephanie Schofield with the Rawlins Fire Department walks through the burned section of Cafe Genevieve with her dog, Sasha. Sasha is trained in accelerant detection, which helps determine if arson could have caused a fire.

Coffee mugs, plates and other dinnerware were damaged during the early morning fire at Cafe Genevieve on Tuesday. 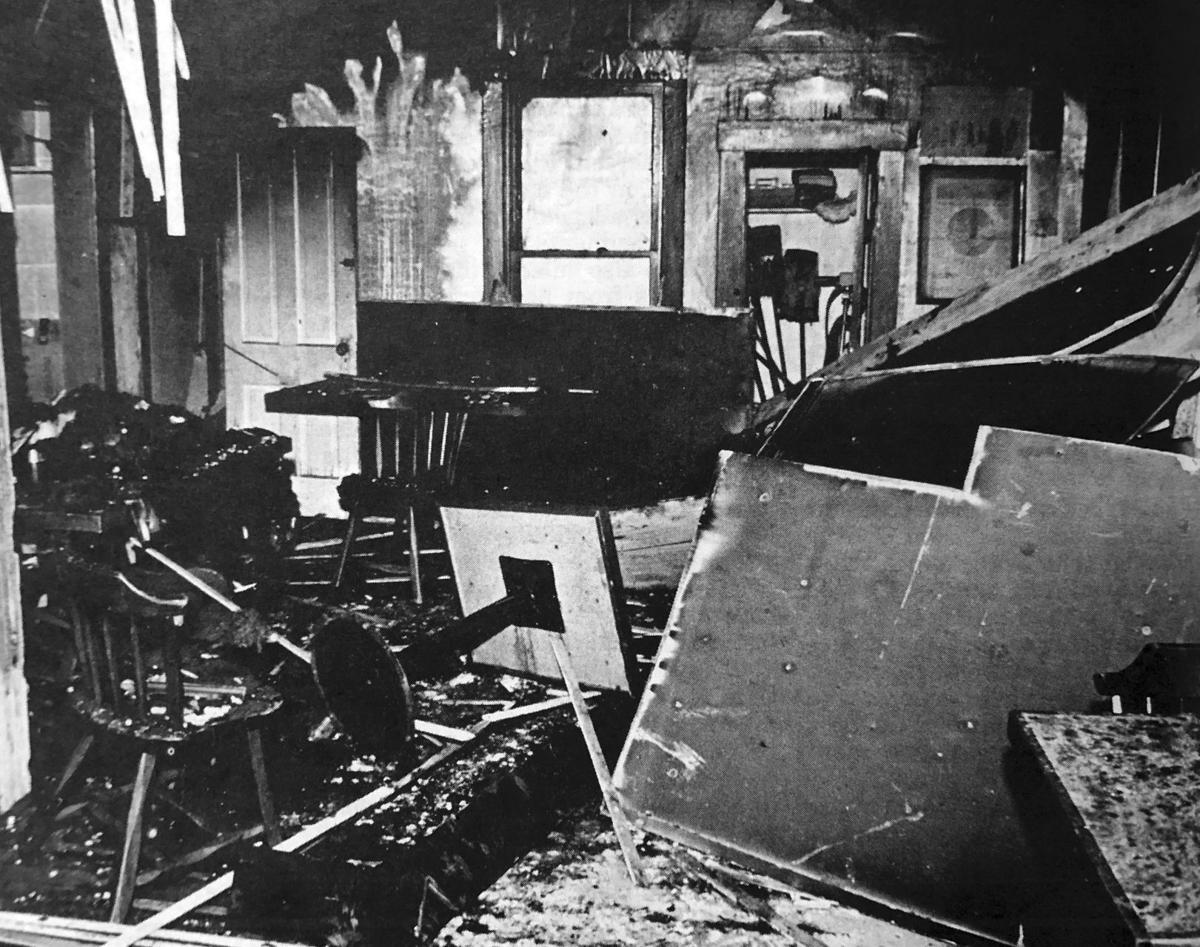 A photograph in the Jan. 25, 1989, Jackson Hole News shows the aftermath of a fire that damaged what was then Jedediah’s Original House of Sourdough.

Wyoming state fire investigator Dave Harley, of Worland, sifts through the burned section of Cafe Genevieve on Tuesday afternoon searching for clues on how the fire started earlier that day. The kitchen and a storage area were heavily damaged, but the main portion of the historical structure was spared. The restaurant will remain closed indefinitely.

A building that has stood in downtown Jackson for 109 years was minutes away from burning to the ground early Tuesday morning.

When firefighters responded to a blaze at the Cafe Genevieve log cabin, flames had engulfed the back part of the building and a neighboring pine tree.

“I was just worried that we’d lost everything,” Cafe Genevieve owner Fred Peightal said. “Thankfully it was caught quickly, and it was just basically some exterior and smoke damage in the kitchen area.”

The street-facing facade and dining area dodged irreparable harm as firefighters conquered the fire before it could escape beyond the back-of-house kitchen and a backyard shed.

“It could have been way worse,” Peightal said.

Following the fire, the popular restaurant will close its doors indefinitely. At the same time, the Jackson Hole Land Trust is in the midst of a community fundraising campaign to preserve the cabin alongside other historic buildings and open space on the Broadway block.

The fire came as a shock to the Land Trust and its partners in the “Save the Block” project, which is seeking to raise $7.5 million to purchase easements that permanently protect the block’s historic character and green space. Land Trust President Laurie Andrews said the fire allowed the community a chance to reflect on what was almost lost, and what still could be lost if “Save the Block” doesn’t succeed.

“It just makes me sick to my stomach,” Andrews said. “It made me really emotional that we could actually lose something on that block. If anything, this just struck a chord that this is more important than ever, and this block means so much to us and we can’t lose any part of it.”

A man who said he was working nearby noticed the fire in the middle of the night and called 911 around 3 a.m. Tuesday. Jayann Carlisle, who delivers the Jackson Hole Daily around town in the wee hours of the morning, pulled over when she saw the blaze on her delivery route.

“We were watching from across the street and could feel the heat,” Carlisle said. “Police officers were trying to kick down the door, and at Persephone, to make sure no one was in there.”

Carlisle used her cellphone to capture a video of the fire and police entering the building, seen above.

Firefighters were on the scene shortly after and were able to go into the attic and knock down the fire within about 10 minutes, Jackson Hole Fire/EMS Chief Brady Hansen said. Hansen called the fire “intense” and said it most likely started in an outdoor area between a shed and the kitchen.

The shed on the back of the property that the restaurant used as storage is a “total loss,” fire officials said.

When the sun rose Tuesday morning, yellow tape cordoned off the cabin as gaping tourists surveyed the damage. Fire investigators were still on the scene Tuesday afternoon trying to determine how the fire started.

Firefighters requested a state fire marshal to assist in the investigation into the fire’s exact cause. That team included an arson dog, although Hansen said he would not classify the blaze as “suspicious.”

Sasha, the only arson dog in the state, gave an indication on some charred kitchen rags behind Cafe Genevieve, Capt. Stephanie Schofield said. But the rags will have to be tested at the state lab to determine what type of chemical the working dog smelled.

“We don’t suspect arson, but we can’t rule anything out yet,” Hansen said. “This is an important structure to our community. There is significant damage, but we’re happy we didn’t lose the whole structure.”

The cause of the fire had not yet been determined as of press time Tuesday night. Fire Marshal Kathy Clay said investigators will continue working at the scene Wednesday morning.

Cafe Genevieve owners said they haven’t been able to assess the scope of the damage.

“We’re not sure the extent of it yet because we haven’t been able to get in there,” Peightal said.

In its century on Broadway Avenue, this isn’t the building’s first fire. The front page of the Jan. 25, 1989, Jackson Hole News featured a story on a fire that “gutted” what was then Jedediah’s Original House of Sourdough, destroying the kitchen area and attic, and even melting the restaurant’s famous 100-year-old sourdough starter. Someone driving past the restaurant on Super Bowl Sunday spotted the fire and drove to the fire station a few blocks away to report it at 7:20 p.m.

The portion of the kitchen that was expanded in the 1980s was damaged in Tuesday’s fire, meaning none of the original historic building was compromised, Teton County Historic Preservation Board Chair Katherine Wonson said, which is “good news.”

“If anything, it makes people more passionate and concerned, and it makes you realize how fragile these resources are,” Wonson said. “I think what this’ll prompt — we’ll see a reinvestment in these buildings and therefore probably some upgrading of systems and things that’ll be good for the building in the long term.”

“Unfortunately, it’s not gonna be a quick fix,” Golightly said. “There’s enough damage in the back to where it looks like it’s going to take some time to return it. But the historic portion of the building is still intact, and the restaurant in the front actually looks great. You can’t really tell much happened there.”

Peightal said he is hopeful insurance can cover the cost of retaining Cafe Genevieve’s 58 employees in the interim.

“We are well covered, and they should be taken care of in the time period where we have to be closed,” Peightal said.

Peightal said the owners have received “a lot of goodwill from the community,” and even tourists who have eaten at the restaurant for years. He also said town of Jackson staff is supportive in helping with reconstruction plans.

“Things happen,” he said. “It’s always a little dark before the light comes. I think we’re gonna be alright.”

The Jackson Hole Land Trust is getting close to meeting its goal to raise $4 million by the 4th of July, another stride toward preserving the Cafe Genevieve block. And they're planning some Independence Day fun to celebrate.

Aiming to save the historic buildings and community green space the downtown block offers, the nonprofit is in the midst of a campaign to raise $7.5 million by August to protect the block from a hotel redevelopment. The current fundraising total is $3.7 million from 2,900 donors, according to the Land Trust.

Now, with two days remaining, the Land Trust needs another 100 donors before the holiday to earn a $1 million challenge grant and bring the fundraising total over the $4 million mark.

"With $4 million secured through over 3,000 gifts by July 4, we will be well over the midpoint of reaching our end goal," Land Trust President Laurie Andrews said in a statement. "This incredible show of community support and commitment of serious donor dollars sends a strong message that we can get this done. With the project pieces in place and more than half of the funding raised, the time is now for project supporters to show their commitment to saving this block."

To celebrate, the Land Trust will launch a 4th of July float in the annual parade. A viewing party will also take place at the 135 Broadway Ave. block, featuring a barbecue, bloody marys and beelines from 10:30 a.m. to 12:30 p.m.

Visit SaveTheBlock.org to learn how to donate to the project.