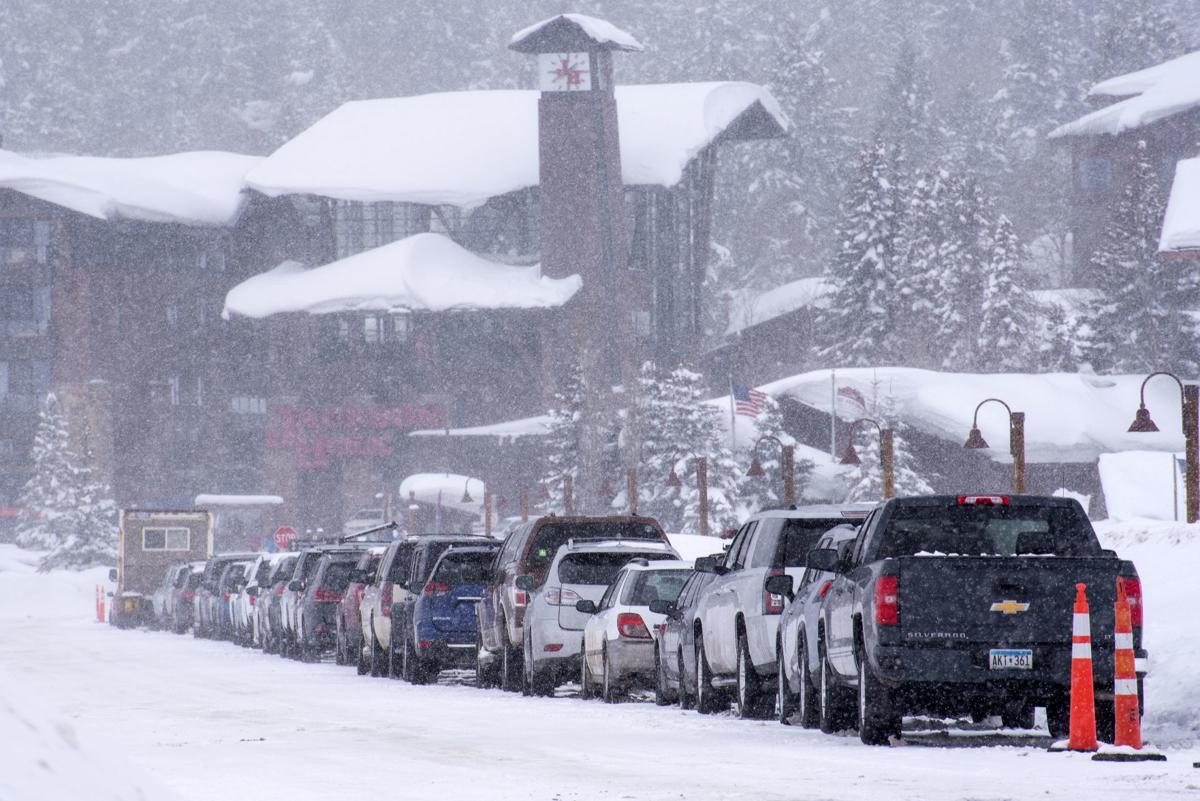 Parking lots at Teton Village filled to capacity several times during the 2018-19 season, prompting the resort to park cars along roads. This winter parking rates at the Village will be higher, skiers will find 250 more spaces at the Stilson lot and express shuttles will run more frequently between and the Village.

Parking lots at Teton Village filled to capacity several times during the 2018-19 season, prompting the resort to park cars along roads. This winter parking rates at the Village will be higher, skiers will find 250 more spaces at the Stilson lot and express shuttles will run more frequently between and the Village.

Despite a dearth of snow just two weeks from opening day, Jackson Hole Mountain Resort predicts another robust winter. That may be a mixed blessing — skiers likely haven’t forgotten the swarms that descended on the slopes last year.

But neither have the people who must prepare for their return. With a suite of marketing schemes intended to spread out visitation and a handful of infrastructure upgrades to accommodate a growing customer base, Jackson Hole Mountain Resort and the Teton Village Association say they’re prepared to handle a horde of skiers from far and wide.

“We’ve been very proactive this year in trying to make sure we’re ready for the crowds when they come,” resort President Mary Kate Buckley told a gathering of Jackson Hole Chamber of Commerce members last week. “And we do think they’re coming.”

Blame it on Ikon, blame it on historic snowfall. Whatever the cause, the shortcomings of village transportation and on-mountain infrastructure were laid bare last winter, when powder days and a record-breaking 715,000 skiers resulted in parking lots filled to bursting and lift lines of unprecedented length.

After taking the last six months or so to reevaluate, resort officials don’t want to be caught with their ski pants down again. Among the most notable efforts to respond to that system failure are expanded parking at Stilson, increased lift capacity around the base area and incentives for skiers to show up before and after the popular ski window.

This summer the resort and the Teton Village Association partnered to create nearly 250 new parking spots at Stilson, which filled several times last year, forcing many would-be resort-goers to turn back.

“Demand for parking in Teton Village far exceeded supply last winter,” said the association’s executive director Melissa Turley. “We think that we will be better positioned this winter.”

Besides parking, the Teton Village Association will also run more frequent express shuttles between the Village and Stilson, alleviating pressure on the START buses, many of which last year arrived at the transit hub full and unable to pick up more passengers.

Parking rates will increase, to $15 in the Ranch lot and $30 in the Village, Cody and Crystal Springs lots. On peak parking days — Dec. 26 to 31 and on weekends until March 15 — those prices will jump to $20 and $40, respectively. However, Turley said, the carpool exemption will remain in place, allowing vehicles with three or more passengers to park for free in the Ranch lot.

Back in the Village the resort will reopen the Eagle’s Rest quad chairlift and add 14 cabins to the Sweetwater Gondola. Buckley said that should move skiers into advanced-beginner terrain more quickly, reducing congestion at the base. The resort has also invested more in snowmaking, she said, in an effort to make more runs accessible earlier in the year, distributing skiers around the mountain.

Jackson Hole isn’t the only resort doing some soul searching. In Colorado the Aspen Skiing Co. is hanging more chairs at Highlands and Snowmass and running more buses, according to The Aspen Times. It also plans to better communicate traffic information, through signage and real-time updates on social media.

Tyler LaMotte, Jackson Hole Mountain Resort’s chief brand officer, is in charge of coaxing customers into planning their trips for the very start and end of the season. For the former he offers the Golden Ticket deal, which allows anyone with a resort season pass from anywhere in the world to receive 50% off daily lift tickets.

Formerly a January program, Golden Ticket has been reconfigured to run from Nov. 28 to Dec. 20 and from March 26 to April 12. The fringe-season promotion also comes with half off dining, lodging and retail with the resort’s partners, as well as half off ski and snowboard demos at village shops.

LaMotte said he’s been tracking the Destimetrics report, a bimonthly lodging forecast based on reservations at more than a dozen hotels. He said he’s seeing “good signs” in the statistics for early December, the most recent of which shows bookings generally up through the middle of the month, though not more than a few percent.

But the resort also wants visitors to come late. For now the main draw appears to be the Rendezvous Festival, which he said will be pushed back a week to the end of March.

Buckley said in September that she’s not convinced the resort will see a repeat of the 2018-19 season. But in a recent statement, resort officials said after considering a host of somewhat unpredictable factors, “JHMR may again see another busy season this winter.”

The popular culprit last year, of course, was the Ikon Pass, a collective pass that grants remarkably cheap access to resorts across the United States and the world. All through last winter the accursed words rang around the mountain as locals protested what they perceived to be an invasion of “Ikoneers.”

It’s too soon to say whether the outrage will continue. Many of last season’s critics may themselves be Ikon passholders now, because the Jackson resort decided to give them out free with the purchase of a Grand Pass. Buckley admitted that has evoked mixed reactions.

“Some people are over the moon, think it’s fantastic, couldn’t wait to get theirs,” she said. “Other people say, ‘Never gonna use it, don’t want to be one of them.’”

If it’s any indication of the collective consciousness, an Ikon-themed Instagram page with nearly 3,000 followers, called “ikonoftheday,” has started posting again in recent weeks and grew in popularity over the offseason. A post on Oct. 22 received more likes than any from last winter.

The most recent post, on Halloween, is a video of a jack-o’-lantern carved with the Ikon logo. The first comment simply reads “Spooky.” Farther down, another states, “Almost as terrifying as the many box waits fueled by corporate multi resort passes.”

Buckley and other resort leaders around the West have acknowledged that the age of Ikon marks a fundamental shift in the nature of the ski industry, opening the door to new demographics and luring longtime skiers to spend even more time at premiere resorts.

“They’ve rewritten the books, and they’ve rewritten it based on price,” Buckley said of Ikon, along with other collective passes like Epic and Mountain Collective. “They’ve gotten more people out to ski than we’ve seen in years and years.”

In the resort’s recent statement acknowledging the likelihood of a busy season, officials attribute it to the potential for heavy snowfall but also to “anticipated Ikon growth.”

Some resorts have more frankly displayed Ikon’s role. For example, in Aspen, where skier visits were up 20%, “Local passholders were about 45% of that increase, and 40% of the skier visits over the weekends were Ikon Pass holders, with most of them hailing from the Front Range and California,” according to The Aspen Times.

But Buckley isn’t yet willing to decisively pin the blame on the pass her local customers love to hate. For one, the Ikon’s debut happened to coincide with a season of well-timed storms that deposited more than 500 inches at the resort, including a record-breaking 193 inches in February alone.

“It was year one, and it was an anomaly snow year,” she said. “We want to see at least a second year of data before we decide what we’re going to do.”

She added that some of the peak visitation periods came during holidays blacked out on the Ikon pass, and that gargantuan snow piles covered some of the parking spaces at Stilson.

Again, whatever the causes, Teton Village leaders recognize the need to adapt to what some have called a “new era” at Jackson Hole.

“We see the industry changing,” Buckley said, “and we’re trying to change with it to the best of our ability, while retaining Jackson.”