Community members are leaning towards moderate density options for building housing in northern South Park based on a cursory review of public feedback following a series of presentations Thursday.

People who attended a Thursday open house about developing the area directly adjacent to Jackson Hole High School watched an approximately 40-minute video which detailed the various “alternatives,” or options for developing the area. The public was then able to place dot-like stickers next to the “alternatives” they preferred. They were also able to write their thoughts about the pros and cons regarding each alternative.

The video and presentations were offered on the hour from noon until 6 p.m.

“I don’t have any actual data immediately regarding what people preferred,” Teton County Senior Long-Range Planner Kristi Malone said Thursday evening. “But it seemed like, just from looking at the dot exercise, that people are more interested in the middle options rather than the two end options.”

At least 100 people attended the Thursday presentation and open house, and about 20 people were on hand for the noon offering. Some declined to speak to the Jackson Hole Daily, but organizers were pleased with the turnout and opinions offered. 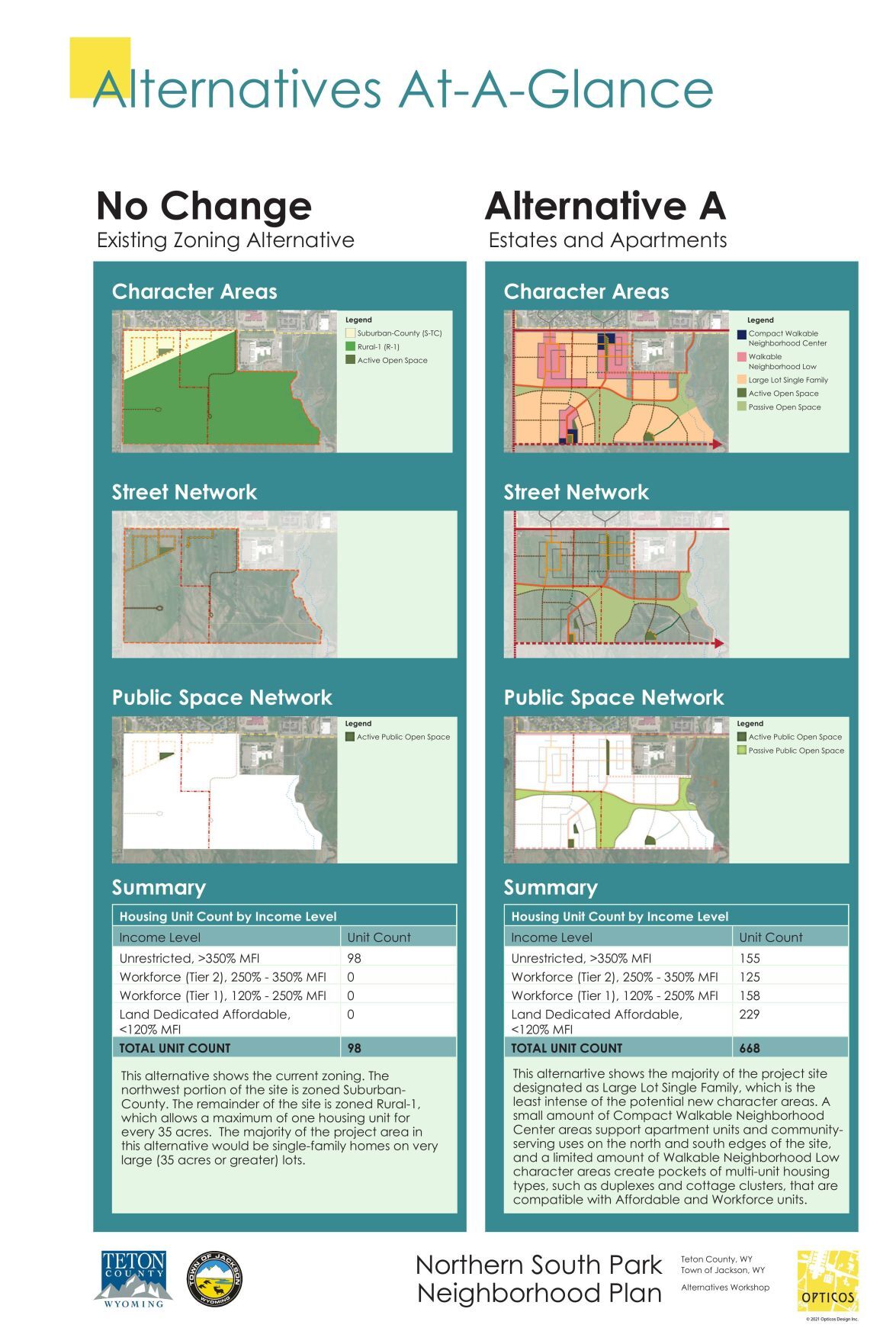 Malone said the majority of people appeared to favor the more moderate alternatives of the four presented.

The first option was to maintain the status quo regarding the current zoning for northern South Park, which would allow the Gill and Lockhart families to develop up to 98 single family homes on roughly quarter acre lots in the northern, suburban-zoned part of the subarea. The bulk of the remaining rural-zoned land could be developed with one house every 35 acres.

On the other end of the spectrum was the fourth option — “Alternative C” — that would allow for the greatest housing density in that area. The two other options — “Alternatives A and B” —would be less dense but still involve a combination of apartments, condominiums, townhomes and larger single-family lots.

Malone indicated Thursday that most people leaned toward alternatives “A” and “B.”

People who were unable to attend Thursday’s event, or chose not to because of COVID-19 precautions or other reasons, can still weigh in online.

The deadline for public input via NorthernSouthPark.Konveio.com, where people can also watch the video explaining the alternatives, is Sept. 2.

“The big thing is for people to continue to participate throughout the process,” Malone said.

“So, the next two weeks we’re going to be pushing really hard for people to participate online,” she said. “Everything that we have here today is available online.”

Overall, Malone said she’s pleased with the progress of the planning, though she said “the more people who weigh in, the better,” and looks forward to more community input.

“This really is only the middle part of this really, really big project,” she said. “The objective from this point is to narrow everything down into one proposed neighborhood plan, and to do that we need to hear what people think. It’s easier to react to the alternatives that we have presented than if you haven’t seen something on paper.”

We need less people, and more open space. No suburban sprawl. Workforce deed restrictions rather than wage depressing "need" based subsidies that end up passing through to rich people employers.