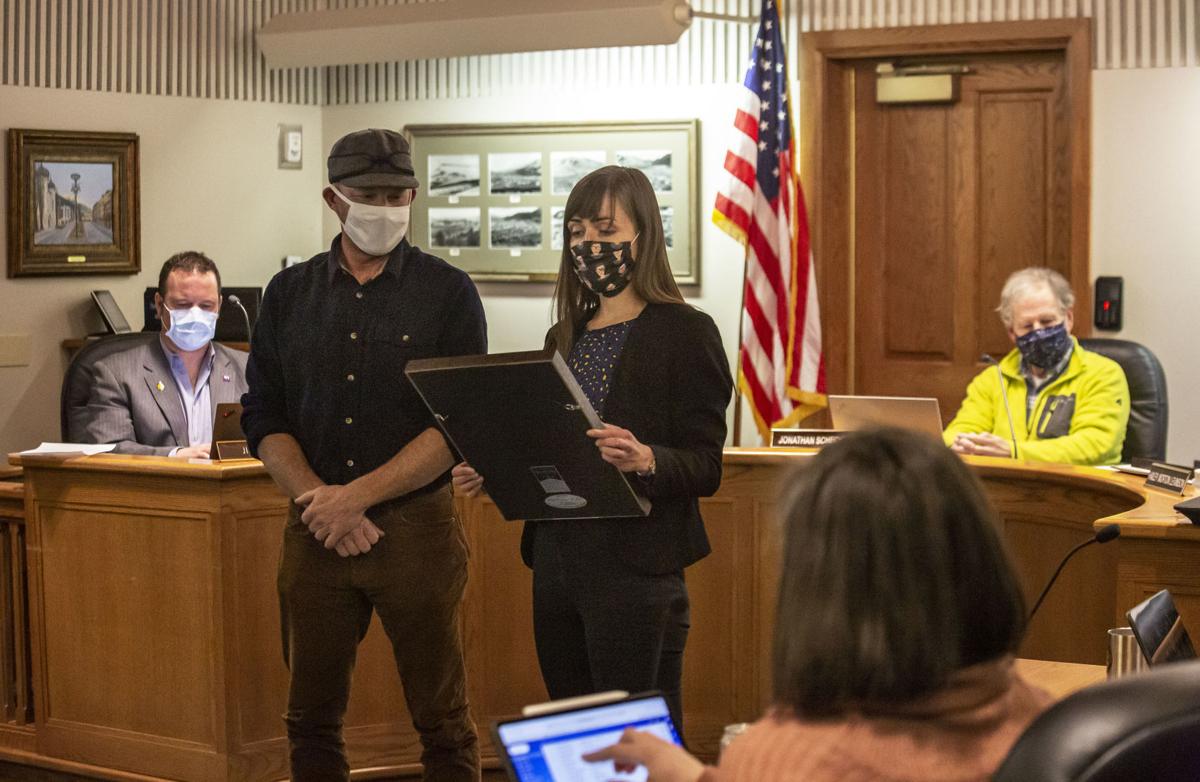 Mayor Hailey Morton Levinson reads a proclamation of appreciation to outgoing Mayor Pete Muldoon for his service to Jackson during a council meeting on Monday. 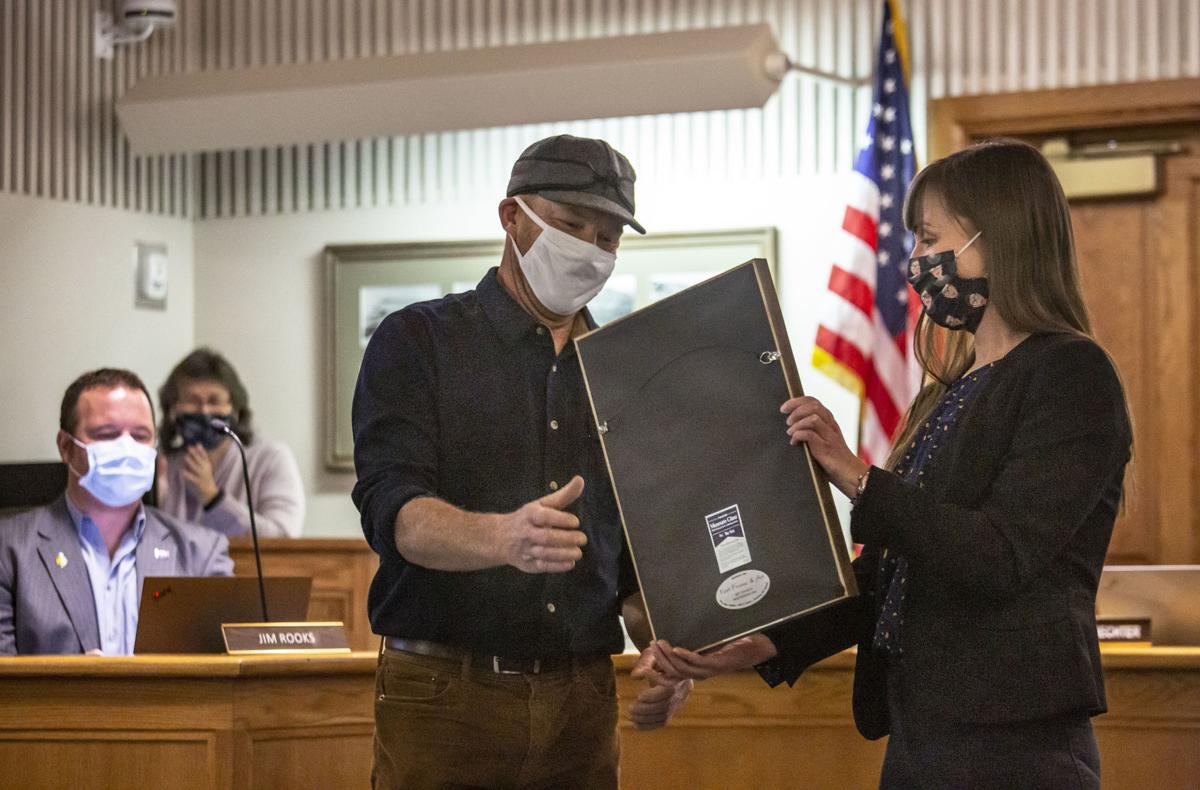 Mayor Hailey Morton Levinson hands outgoing Mayor Pete Muldoon a framed proclamation of appreciation for his service to Jackson during the first council meeting of the new year on Monday. 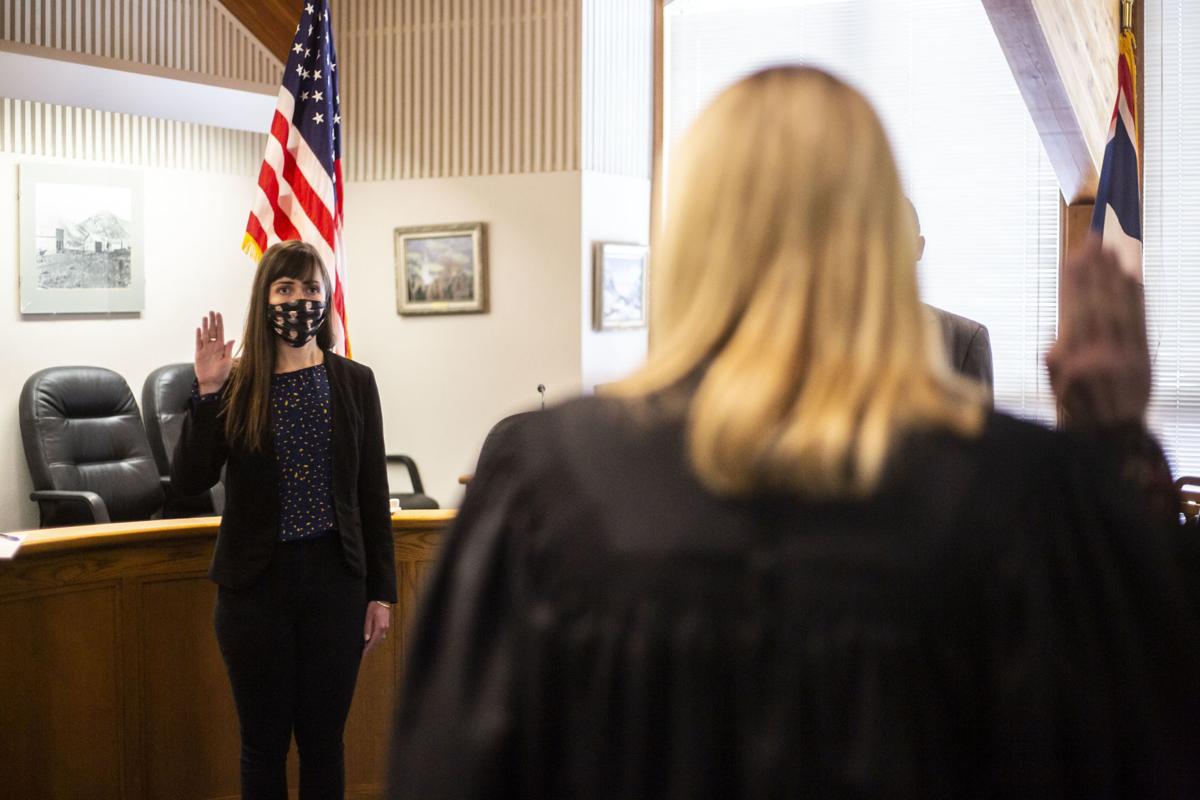 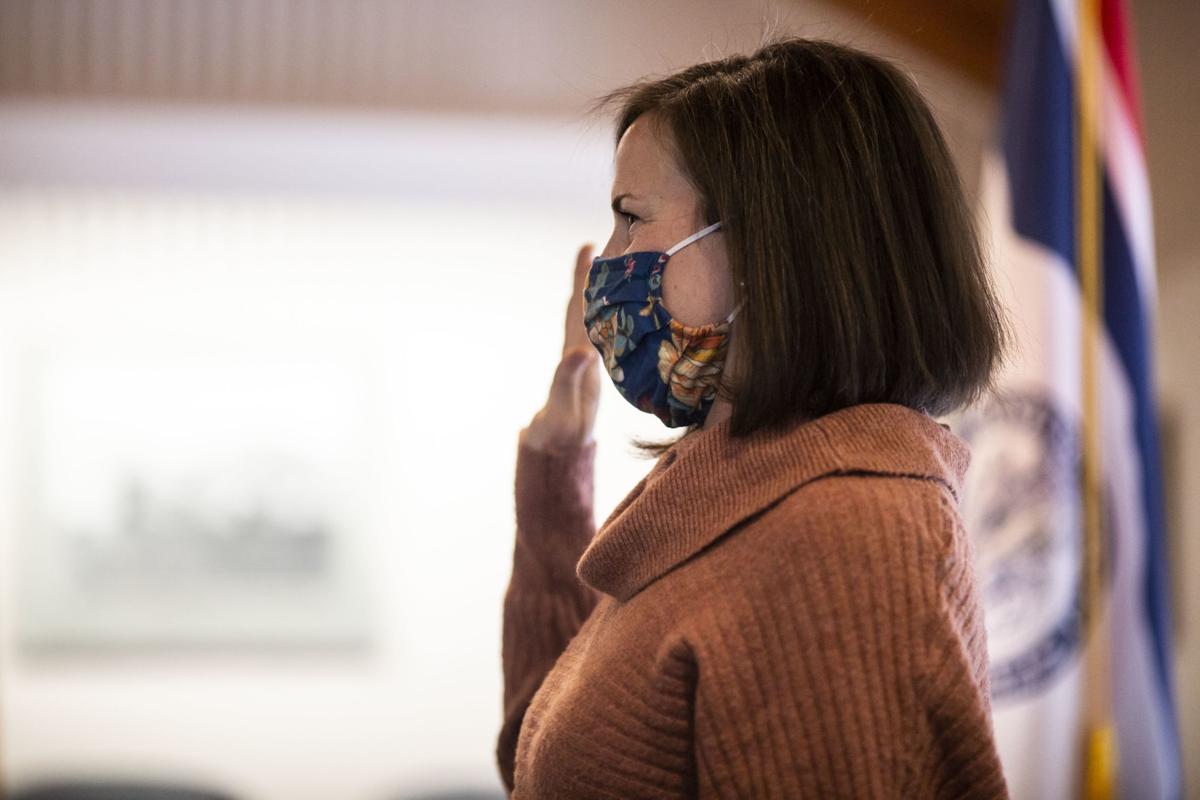 Jessica Sell Chambers is sworn in as a Jackson town councilor on Monday at Town Hall. 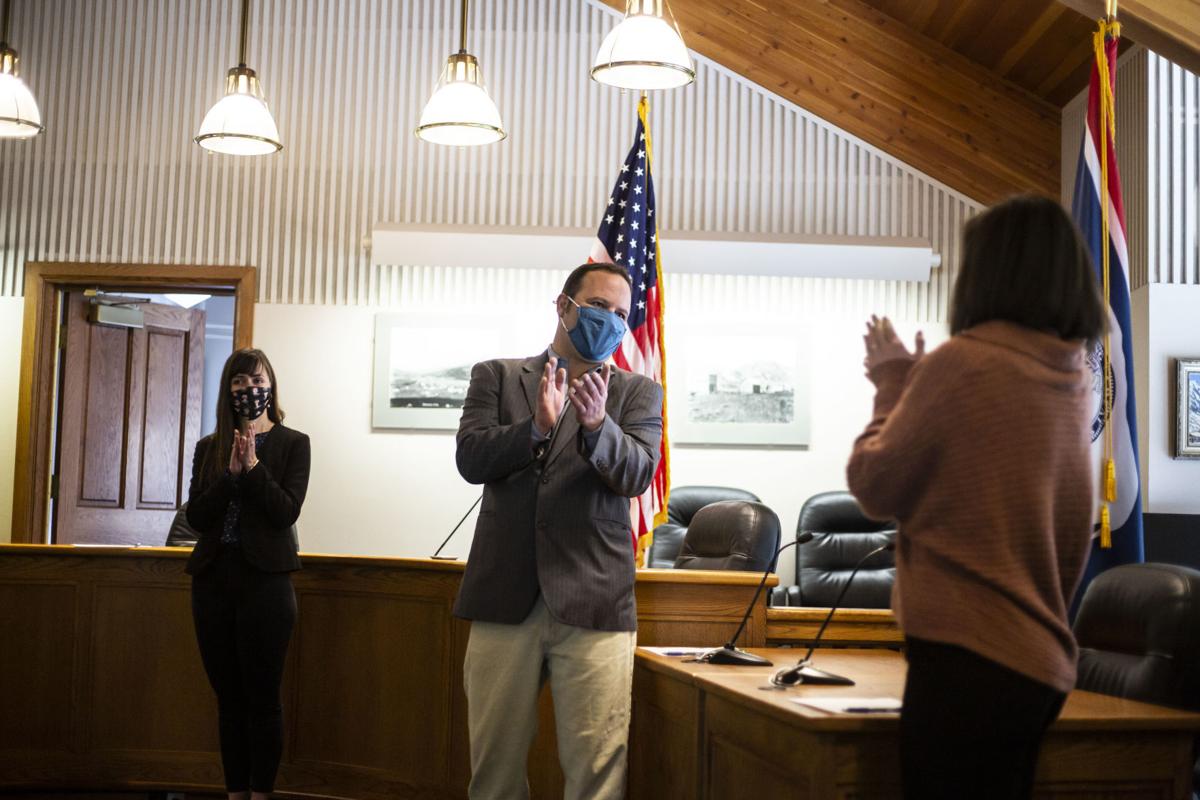 From left, Mayor Hailey Morton Levinson and Town Councilors Jim Rooks and Jessica Sell Chambers applaud after being sworn in to the Jackson Town Council by Judge Melissa Owens on Monday at Town Hall. 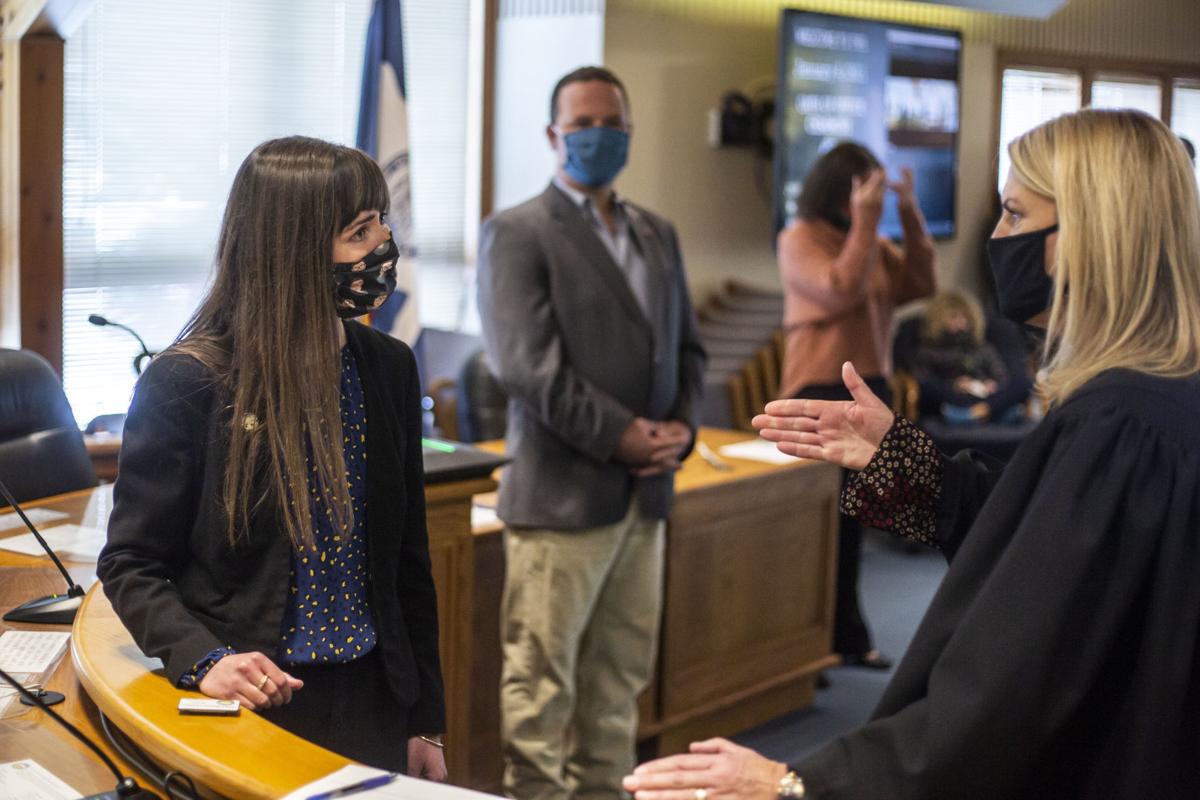 Outgoing Councilor Jim Stanford receives a golden shovel for his service to Jackson during a Town Council meeting at Town Hall on Monday. Stanford advocated strongly for proper snow removal for greater accessibility to neighborhoods and sidewalks.

Mayor Hailey Morton Levinson reads a proclamation of appreciation to outgoing Mayor Pete Muldoon for his service to Jackson during a council meeting on Monday.

Mayor Hailey Morton Levinson hands outgoing Mayor Pete Muldoon a framed proclamation of appreciation for his service to Jackson during the first council meeting of the new year on Monday.

Jessica Sell Chambers is sworn in as a Jackson town councilor on Monday at Town Hall.

From left, Mayor Hailey Morton Levinson and Town Councilors Jim Rooks and Jessica Sell Chambers applaud after being sworn in to the Jackson Town Council by Judge Melissa Owens on Monday at Town Hall.

There was plenty of praise to go around Monday night as the Jackson Town Council thanked two outgoing members for their service, while welcoming two new faces to the council and former Vice-Mayor Hailey Morton Levinson to the mayor’s seat.

Councilors Jessica Sell Chambers, a political consultant, retired educator Jim Rooks and new Mayor Morton Levinson were all sworn in to their seats in an Oath of Office Ceremony on Monday morning, then participated in Monday evening’s meeting for the first time in their new roles.

The bulk of the meeting, which was light on town business, was spent recognizing and thanking Muldoon and Stanford. Muldoon served for the last four years as Jackson’s mayor, and Stanford served two terms as a town councilor, including a stretch as vice-mayor.

But before getting to those resolutions of appreciation, the council took a few minutes at the onset of the meeting to remember three prominent Jackson Hole figures who died in the last year: News&Guide “Far Afield” columnist and birder Bert Raynes, and state legislators H.L. Jensen and Grant Larson, who first made names for themselves as prominent Jackson Hole businessmen.

In penning his column, Raynes often blended science education with wry and witty commentary about the world around him. Councilor Jonathan Schechter, who sparked the idea for the “Far Afield” movie about Raynes’ life, said he was “tempted to introduce a resolution” declaring that last year, a leap year, “lasted not 366 days, but 366 1/2,” as Raynes died mid-morning Jan. 1.

Councilor Arne Jorgensen, who was later named vice-mayor by Mayor Morton Levinson, took a few moments to recall Larson and Jensen and their lasting impact on not only Jackson Hole, but also the state of Wyoming.

“And now the moment we’re all waiting for,” Morton Levinson said as the council moved on to the first two resolutions of the year — those honoring Muldoon and Stanford.

Mayor Morton Levinson stood with former Mayor Muldoon in the middle of the council chambers — in which the entire council sat together for a meeting for the first time since early in the pandemic — as she read the resolution recognizing the outgoing mayor.

“Whereas Pete’s respect for a citizen’s right to participate in local government and respect for his fellow elected officials and their responsibility to thoroughly examine and discuss issues was always exhibited through his generosity in allowing lengthy public comment, as well as allowing lengthy time during council meetings for thoughtful and meaningful council debate and discussion,” the resolution read, in part.

The resolution continued on to laud Muldoon’s “decisive leadership” throughout the pandemic, as well as on such issues as human rights and equality, housing and transportation, among others.

Morton Levinson, Town Manager Larry Pardee and Schechter made sure the presentation to former Councilor Stanford was befitting the colorful, loquacious councilor known to speak his mind and take stands on issues near and dear to him and his constituents, sometimes resulting in Stanford being the “1” in 4-1 council votes.

Stanford’s resolution commended him seriously for his environmental work and advocacy for access to Snow King. But it and a subsequent mock resolution Schechter presented took a couple joking jabs at one particular issue for which Stanford — even as recently as December, when he helped convince the council to approve a part-time snow-plow driver position — has become known: snow plowing and snow removal.

Pardee took a knee as he presented Stanford with a golden snow shovel, drawing laughter from the council and attendees, before Schechter read the humorous resolution.

Reading the mock resolution — which Schechter called a “certificate of classification” — Schechter said, “I hereby decree ... that the winter part-time plowing position for the Town of Jackson be forever memorialized in the human resources records in the Town of Jackson as the ‘James Edward Stanford Frozen Fluid Elimination, Evacuation and Stockpiling Specialist.’

“Furthermore, professionals appointed to this critical position will be honor-bound to uphold the sacred tenets of frozen fluid elimination, evacuation and stockpiling that James Edward Stanford held most dear ... so that they may never forget the integral importance of snow plowing, particularly of Jackson’s alleyways, to the peace, prosperity, happiness, welfare and wellbeing of the Town of Jackson, the state of Wyoming, the United States of America, and really, when you come to think of it, all of humanity.”

After receiving his actual resolution of appreciation, Stanford did take a few serious moments to thank Muldoon and others for their leadership and guidance.

“If I’ve been able to do anything good these last eight years on the council, I have to thank so many people who’ve come before me, who have showed me the way [and] showed me what this community is about. People like Bert Raynes, for instance.”