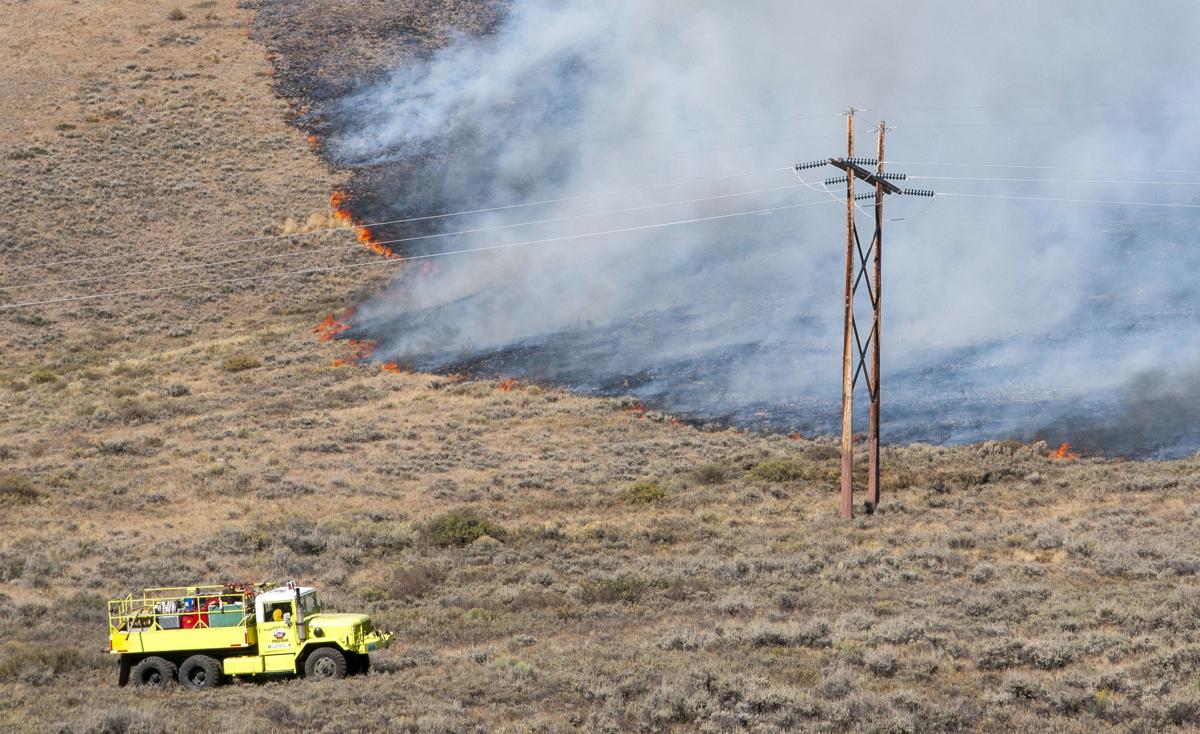 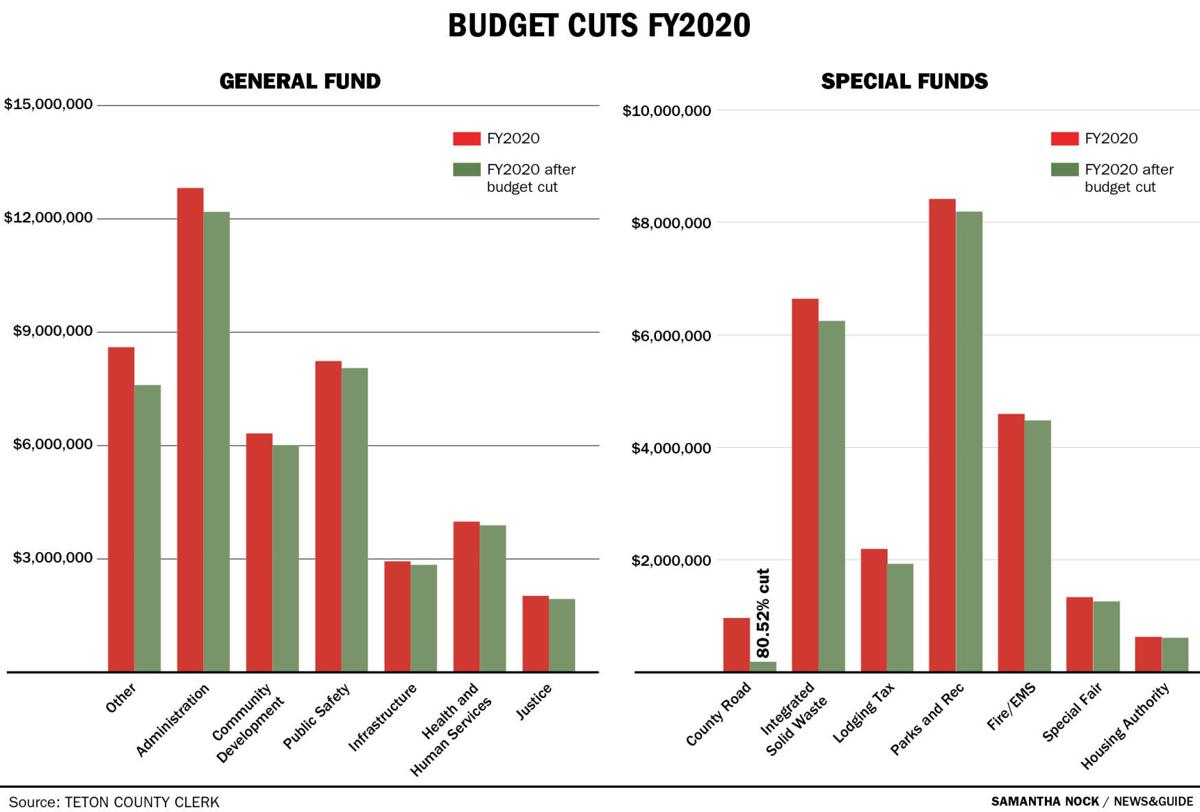 As Teton County slashed spending, the government also laid off workers in response to the COVID-19 disruption.

“We have suspended programs and access to the rec center, so we have eliminated approximately 39 part-time positions,” Teton County/Jackson Parks and Recreation Director Steve Ashworth said in an email.

The department is also not opening restrooms until June, and “leaving vacant positions vacant.”

County commissioners requested that departments look for savings in early April when the county treasurer’s projections showed a major hit to lodging and sales tax revenue in the last four months of the fiscal year, which ends in June. The decline was, in part, a result of decreased tourism due to the COVID-19 pandemic.

The county is now close to signing off on about $5.3 million in cuts. A budget amendment formalizing the changes will be brought before commissioners on May 5.

The plan, as it stands, is to make the cuts in two large swaths.

One would be a $3.4 million or so hit to the general fund, which operates the majority of the county’s government and is funded by local lodging, sales and property tax. About $1.4 million of that total is set to come from department-level cuts. The plan for the remaining $2 million is to reverse a $1 million expenditure to county savings and cut $1 million in contingency funds.

The other trim, about $1.9 million, is planned for cuts to special funds for departments like Parks and Rec and Jackson Hole Fire/EMS. Through special mechanisms, those departments receive funding from other streams.

“The shortfall is then split between the town and county to make them whole,” County Clerk Sherry Daigle said.

A $1.9 million cut would amount to about 3% of special fund budgets.

The road and levee department offered up the biggest overall hit, nixing a few capital projects that weren’t ready for prime time. For Jackson Hole Fire/EMS, cutting back may mean pausing the replacement of all five brush trucks in its wildland firefighting fleet.

Voters approved funding for four trucks in the 2019 specific purpose excise tax, or SPET, election. The county was going to pick up the bill for the fifth truck, Fire/EMS Chief Brady Hansen said, which would have allowed the department to replace all of the brush trucks in its fleet over several years.

“Now we won’t be able to do that,” Hansen said.

Budget talks are underway for the next fiscal year, which will likely see further cuts.

For Parks and Rec, that could mean eliminating five full-time positions. For the fire department, meeting the 20% cut that commissioners have requested could mean holding off on purchasing a new ambulance and nixing upgrades to EMT and personal protective equipment.

“All of the cuts we had to make out of this year’s budget — we’re going to be ok,” Hansen said. “The cuts in next year’s budget are going to really cause us to tighten our belts. Running fire and ambulance during a budget downturn is going to challenge us at all levels.”

The county has furloughed its public information specialist.

Commissioners’ Administrator Alyssa Watkins said the decision to furlough the public information officer was based on “workload projections.”

“It was not a budgetary decision,” she said.

Watkins did not specify how that person’s workload had decreased in light of the COVID-19 pandemic and General Services Director Sarah Mann referred the News&Guide to Watkins. Mann will handle matters previously handled through the public information specialist.

In an email, Mann said the furlough was temporary.

“There is an intention at the time of furlough to bring the employee back to work when the workload increases,” she wrote.

When that is, Watkins said in an email, would be determined when the public information workload, coupled with Mann’s regular duties, exceeds her capacity.

Has any large-or not as large- well known company EVER tried to set up a satellite campus (etc) here-say like Oracle, Google, etc? I can only imagine what they ran into: ridiculously overpriced vacant land often with a heckuva lot of (not always friendly) regulations and restrictions-and to top it off: they found out they had to pay their workers at least $75,000-if a family- just to be able to afford rent. And if a family wants to buy a home at today current median house price of $1.7 million-they need to make over $220k a year.... I place the blame of this directly on the real estate agents here who never really seemingly cared about what the nearly 10%+ annual rise property values every year-and sometimes quite a bit more in certain sectors-was doing to a community whose wages have not truly done much of anything in the last 30 years. In the midst of this whirlwind: if a kind and community oriented landlord hoped to charge a rent that was 'affordable' in a town where you are lucky to make over $45k/ year, their property taxes went haywire because of the above factors, and they were then nearly 'forced to charge out of reach rents that quickly began to push what is now 43% of our workforce to live out of town. Or out of towners started snapping up condos and doing VRBO with them, driving their prices into the stratosphere where now you cant even find a condo in town for less than $500k, and most actually start at $750k and up. These agents (and developers, etc) will then duck their heads when confronted with their 'opportunism" and blame it on 'supply and demand" but we all know better: its a called 'greed'. And now Jackson is really only actually "affordable" to those who dont live here year around or have jobs that are not based here. So the chances of ever having a real job here with a liveable salary-with a company that is not based on tourism that would actually provide working families with a reasonable standard of living and keep them here for possibly generations to come-that seems 1000% impossible now. Greed (not 'supply and demand" give me a break!-thats just a flimsy capitalistic excuse!) killed that opportunity. 1986 was literally the last year that a local could buy a house here on average wages at an average/median price, according to the Charture Institute. That was 34 years ago. So we are gonna stay touristy forever-unless we end up with an extremely visionary (and well funded?) bunch of elected officials. And.. thats also not gonna happen:why? Because most of them (not all of course) own property here. And are vested in it rising in value every year-even as they try to find the rest of us who were not so lucky an affordable alternative. Those are out there, but rare and hard to qualify and/or succeed with.... We are stuck, arent we...?

The perils of a one-legged economy. The local business community and leaders over the last decades did too little to diversify our economy. Tourism is the easy one to developer in a place like this. But it’s got unfortunate side effects. Indications are that the tourism industry will be very slow to return to normal. Much, much larger cuts could be in store.

An economy, based solely on tourism, will always be at the mercy of the people. Bad planning on the part of this county.