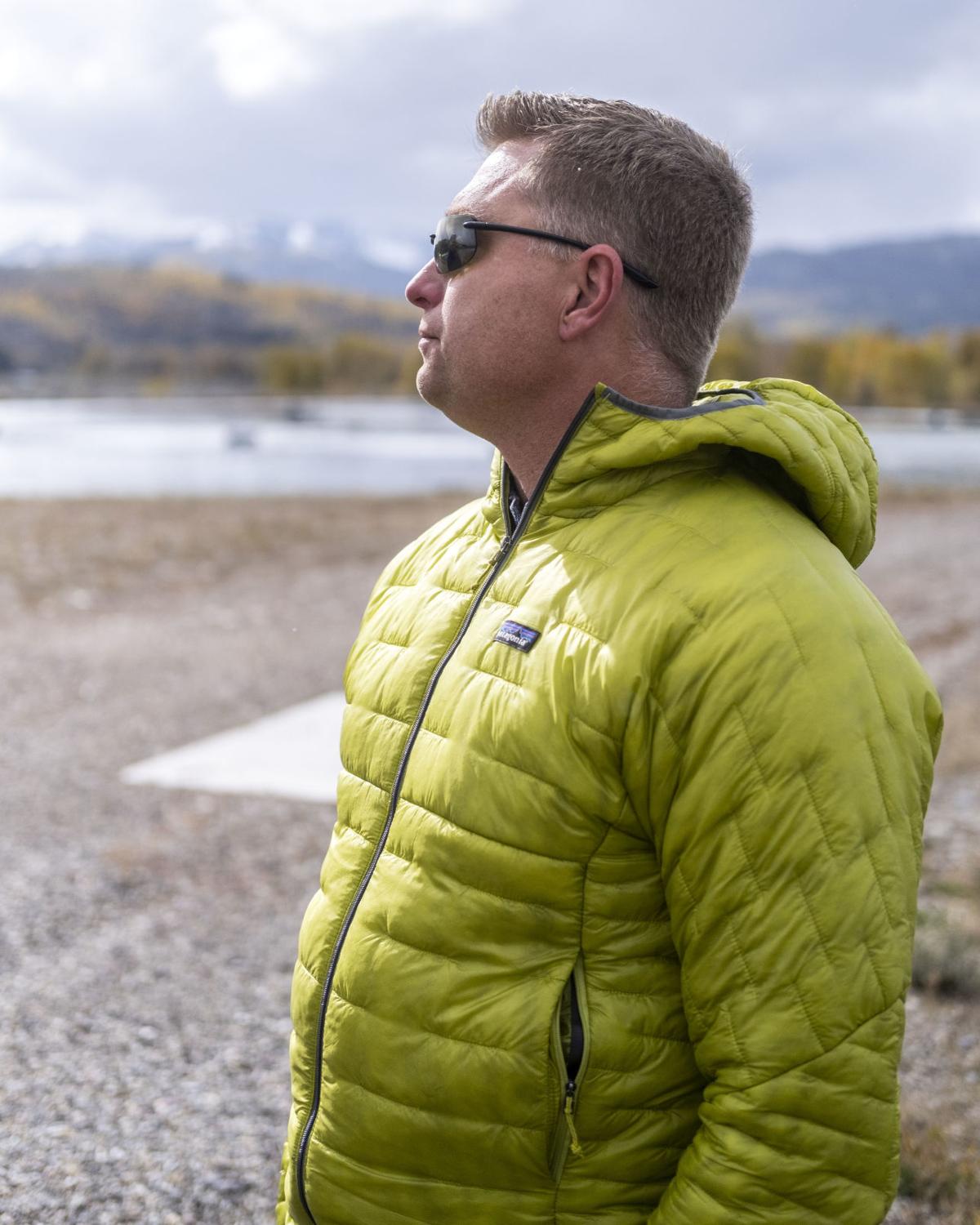 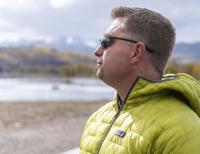 Rancher Street Alternative 2 was chosen by the Jackson Town Council on Monday. The schematic shows where sidewalks would be added on both sides of Rancher Street between Pearl and Hansen avenues, and on one side of the street from Pearl north to Broadway Avenue. 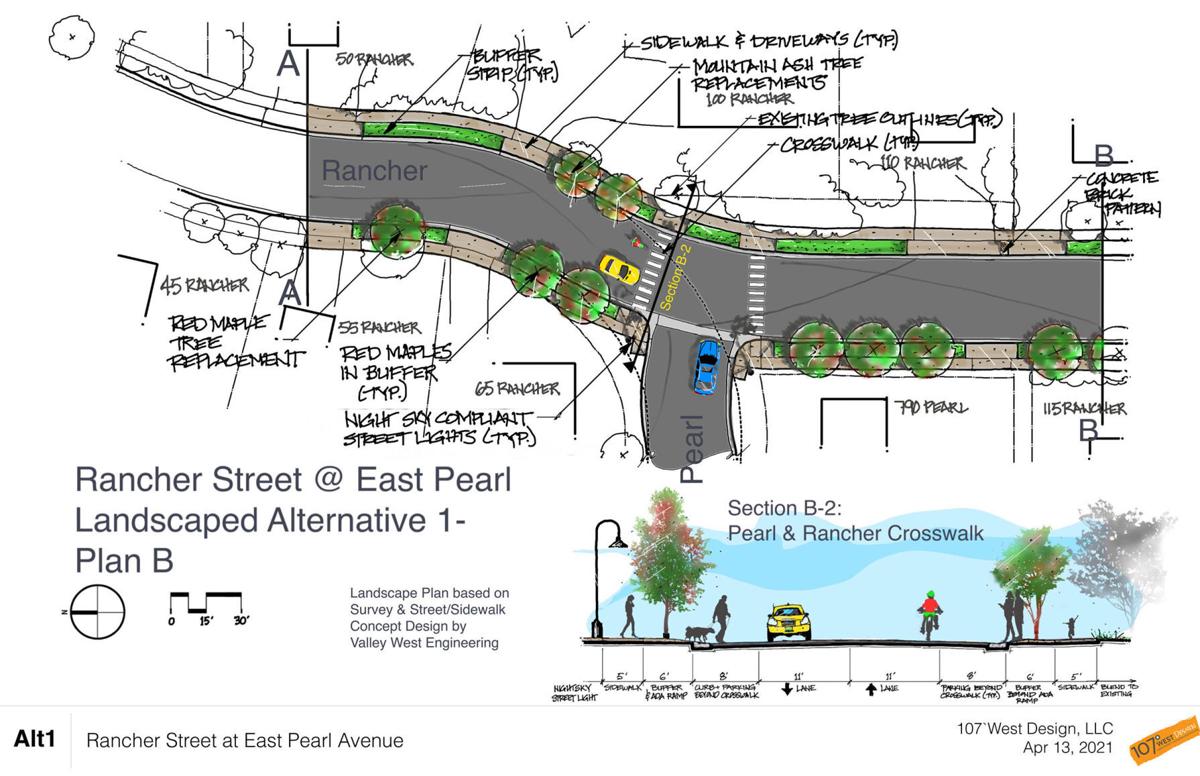 Rancher Street Alternative 2 was chosen by the Jackson Town Council on Monday. The schematic shows where sidewalks would be added on both sides of Rancher Street between Pearl and Hansen avenues, and on one side of the street from Pearl north to Broadway Avenue.

The town of Jackson’s Complete Streets Program took another step toward completion Monday when the Town Council approved a street-and-sidewalk plan for the stretch of Rancher Street in East Jackson from Broadway to Hansen Avenue.

The council approved Alternative 2 of three proposed alternatives for the Rancher project, and also chose Option 2 of four presented for the intersection of Pearl and Rancher.

Assistant Public Works Director Johnny Ziem has presented and discussed the alternatives with the council over several meetings, including Monday afternoon’s workshop, fielding questions from councilors each step of the way about various aspects of the project. Ziem and town Community Engagement Specialist Susan Scarlata spent a good deal of time in recent months gathering, compiling and assessing public opinion about desires for the project, particularly from residents of the Rancher Street corridor.

Ziem noted on Monday that the feedback received from the public was valuable as officials formulated the design, and said one of the “biggest pieces of information we got was that nobody was really supportive of [adding] streetlights.” The second-most heard piece of input, Ziem said, “was no one was really excited about adding street trees.”

At the workshop, Ziem recapped the three alternatives for the design, along with where sidewalks and “furnishing zones” — or grassy areas between the sidewalks and street — would be placed.

Alternative 1 called for using all of the town’s right-of-way for the entire Rancher corridor between Broadway and Hansen to allow sidewalks on both sides of the street, along with furnishing zones and the potential for “street trees” in the furnishing zones, if the council desired.

Alternative 2, which the council chose, is the same as the first alternative between Pearl and Hansen — with sidewalks and furnishing zones on both sides of the street along that stretch — but only includes a sidewalk on one side of Rancher between Pearl and Broadway Avenue to the north. There will be no street parking on the sidewalk side of Rancher in that stretch.

“That way we’re able to extend the asset into the actual roadway, so to speak, and that helps us kind of deal with some of these nonconforming driveways that we’ve talked about,” Ziem told council.

Alternative 3 would have had sidewalks on both sides of the street for the entire stretch from Broadway south to Hansen, but on one side of the street the sidewalk would have encroached upon the right-of-way to allow for continued street parking on that side of Rancher.

Ziem then presented the four options town staff designed for the intersection of Rancher Street and East Pearl.

The first option essentially left the intersection — which now has a bit of a curve on the east side of Rancher Street — intact, with a yield sign for vehicular traffic coming from Pearl onto Rancher.

Option 2, favored by the council, straightens out the curve on the east side of Rancher, which Ziem said “allows for a little better pass-through at this intersection.”

“This option would allow for us to do some things in terms of adding some crosswalks we are looking at, and as part of this option would turn this into a three-way stop, which was also supported by the community when we did our public outreach,” Ziem said.

Options 3 and 4, which were not recommended by town staff, involved some thinking outside of the box, Ziem said, and included small roundabouts at the intersection. Ziem said there were concerns about both turning radius and proper lighting when staff examined the viability of those options. They were accordingly dismissed by the council.

Councilors seemed to be immediately on board with the staff’s recommendations of Alternative 2 and Option 2 for the corridor and intersection, respectively, with Ziem and Vice Mayor Arne Jorgensen discussing how Alternative 2 will slightly narrow the traffic lanes on Rancher Street, which tends to slow traffic and make streets safer.

Though they were in agreement about those recommendations, the councilors did discuss streetlights and additional trees, both for safety and aesthetic reasons, despite the fact that public comment was overwhelmingly against the addition of either.

While acknowledging the desire of the public not to add streetlights, Jorgensen asserted that the council should consider adding them at some places, such as intersections. Jorgensen told of an elderly gentleman who made a comment to him when he was running for council just over two years ago. The man, Jorgensen said, felt “completely left behind by this community” and said streetlights were critical to his ability to navigate the town.

“It really struck a chord with me,” Jorgensen said. “And I have been one who has been particularly concerned about dark-sky compliance issues. But particularly for a stretch of street that is serving our senior population, I do feel like it’s important for us to do some lighting.”

Councilor Jim Rooks, meanwhile, agreed with Jorgensen about the lighting issue, but opposed adding more trees — in contrast to Councilor Jessica Sell Chambers’ support for them — saying that they cost money to maintain and can cause problems such as cracking the nearby sidewalks and roadways.

“On this, a little bit less is more, for me,” Rooks said.

Councilor Jonathan Schechter said he’d heard from an elderly couple who live on Rancher who are concerned about the disruption to their lives caused by the construction.

“As we all know, construction is messy, it’s time-consuming. ... Yes, there will be disruption, but will we work to minimize that disruption? Absolutely,” Ziem said.

On a motion by Jorgensen, the council voted unanimously to approve Alternative 2 for Rancher Street and Option 2 for the Pearl intersection, also instructing staff “to include limited lighting” at some intersections

Ziem said work will commence in 2022 at an expected cost of around $1.9 million.

“Yes, there will be disruption, but will we work to minimize that disruption? Absolutely.” — Johnny Ziem jackson Assistant public works director

Residents: “biggest pieces of information we got was that nobody was really supportive of [adding] streetlights.”

Council: instructing staff “to include limited lighting” at some intersections