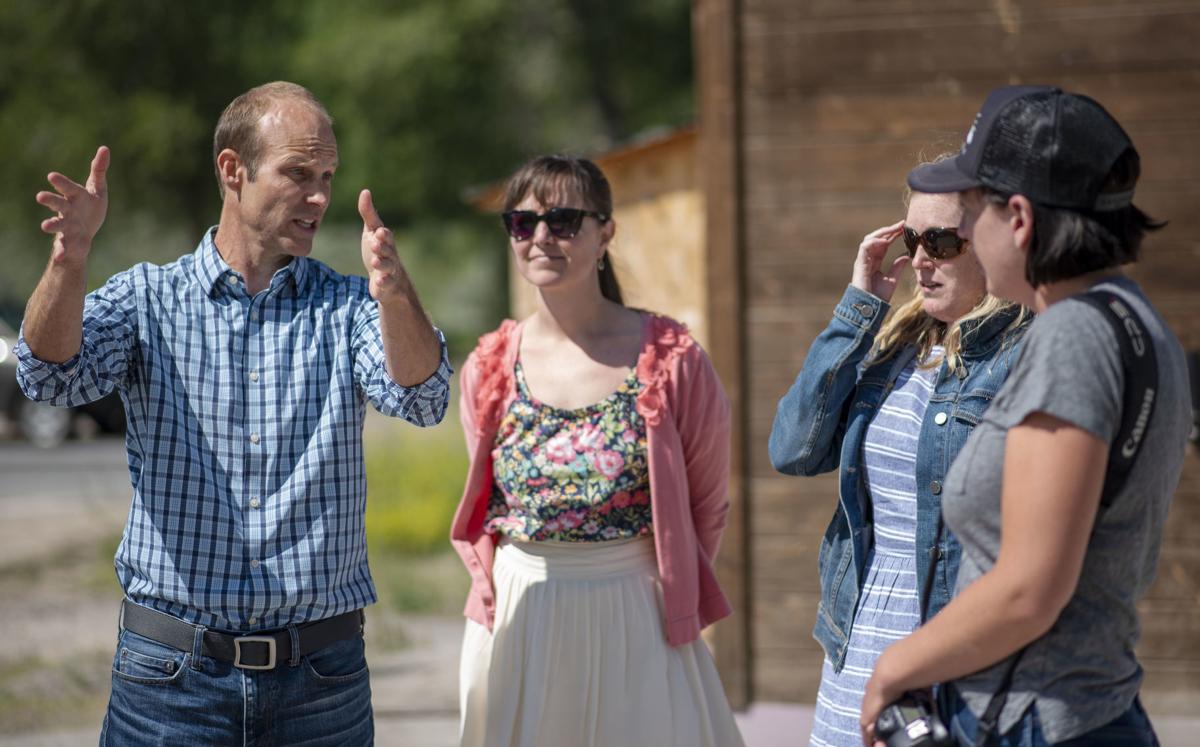 Hunter McCardle, developer of the new Westview Townhomes, chats with Jackson Vice Mayor Hailey Morton Levinson and Maureen Murphy of the Jackson Hole Chamber of Commerce during a gathering to kick off the project Tuesday morning.

Westview Townhomes will include 16 workforce ownership units and four market-rate ownership units. The development on Highway 22 near the “Y” intersection is expected to be completed by September 2020.

Hunter McCardle, developer of the new Westview Townhomes, chats with Jackson Vice Mayor Hailey Morton Levinson and Maureen Murphy of the Jackson Hole Chamber of Commerce during a gathering to kick off the project Tuesday morning.

Westview Townhomes will include 16 workforce ownership units and four market-rate ownership units. The development on Highway 22 near the “Y” intersection is expected to be completed by September 2020.

Three years after the conception of the Westview Townhomes, developers have overcome a rocky start to begin work on Jackson’s newest housing project.

Construction is scheduled to start soon on 20 ownership units just outside town on Highway 22, where Choice Meats once stood. Of those, 16 will be deed-restricted for workforce housing and the rest will be sold at market rate.

“For me, that’s a really big win,” Councilor Hailey Morton Levinson said at Monday’s groundbreaking ceremony. “And that’s a really exciting way for the town and a private developer to work together to bring more workforce housing to our community.”

The town helped with infrastructure upgrades, but besides that it’s a rare instance of workforce housing arising without public funding or the help of a nonprofit like the Jackson Hole Community Housing Trust or Habitat for Humanity.

The project is now in the hands of Hunter McCardle with Red Roots Communities, a group that specializes in building workforce housing. Though he does not live in Teton County full time, McCardle said, he has been coming here since the late 1970s and has “deep ties to the area.”

Originally the Westview Townhomes were the vision of Eric Grove and Charlie Schwartz, two longtime locals and self-described “workers,” who purchased the property in 2008.

“Charlie and I are just regular guys,” Grove said. “We saw the need to bring quality housing.”

But as a couple of regular guys, they soon discovered why more of their peers don’t develop housing. Even professionals face major hurdles, especially when it comes to building homes with restrictions on who can own them and at what price.

Unlike affordable deed restrictions, workforce deed restrictions do not cap the sale price of units. However, they do require that 75% of each household’s income is earned locally, that the owners do not own residential real estate within 150 miles of Teton County, and that at least one person in the household works full time in the county.

Another challenge arose when Grove and Schwartz negotiated a cost-share agreement with the town to extend the sidewalk, as well as sewer and water lines, from the “Y” intersection to the property.

“That triggered a chain of events that put a lot of financial pressure on Charlie and I,” Grove said. “We understood there were going to be some pitfalls to it, but not this much.”

Just weeks ago they sold the property to Red Roots, which is moving forward with the same design they proposed in 2016. The homes will come with two bedrooms, two bathrooms and a two-car garage, “so you’re not throwing bikes on balconies and everything else.”

McCardle and others praised Grove and Schwartz for persisting in their effort to provide homes for workers.

“They went above and beyond,” McCardle said. “Instead of building the minimum requirement [of workforce housing], they really put their reputation and neck on the line to deed restrict all 16 of these units.”

Their initial — and unprecedented — plan was to use a one-off deed restriction to work directly with employers rather than sign individual leases with workers. They wanted to create long-term master leases with businesses, under which the employers would pay rent and then charge employees whatever they deemed fair, as long as it didn’t exceed the original price. But now the homes will simply carry workforce deed restrictions.

McCardle said he is still waiting on building permits for the project, but he expects them to come through in time to break ground in about two weeks. On that timeline, he estimated, the 16 workforce homes would be complete by September 2020.

Including these units, the Jackson/Teton County Affordable Housing Department has just under 250 deed-restricted homes in various stages of planning and development.