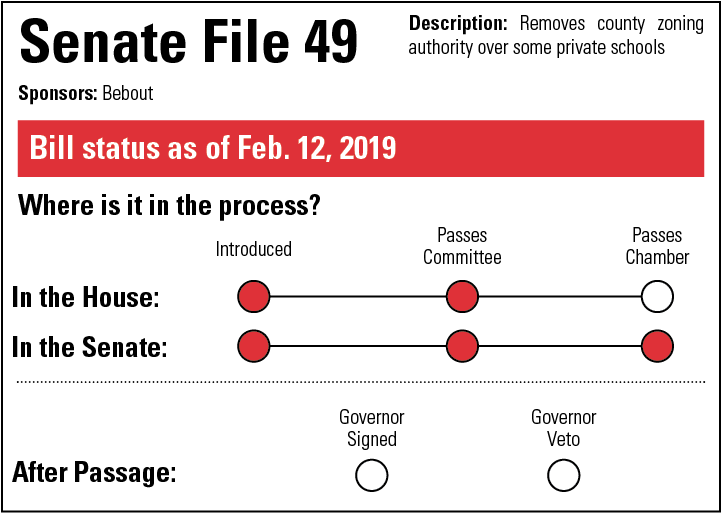 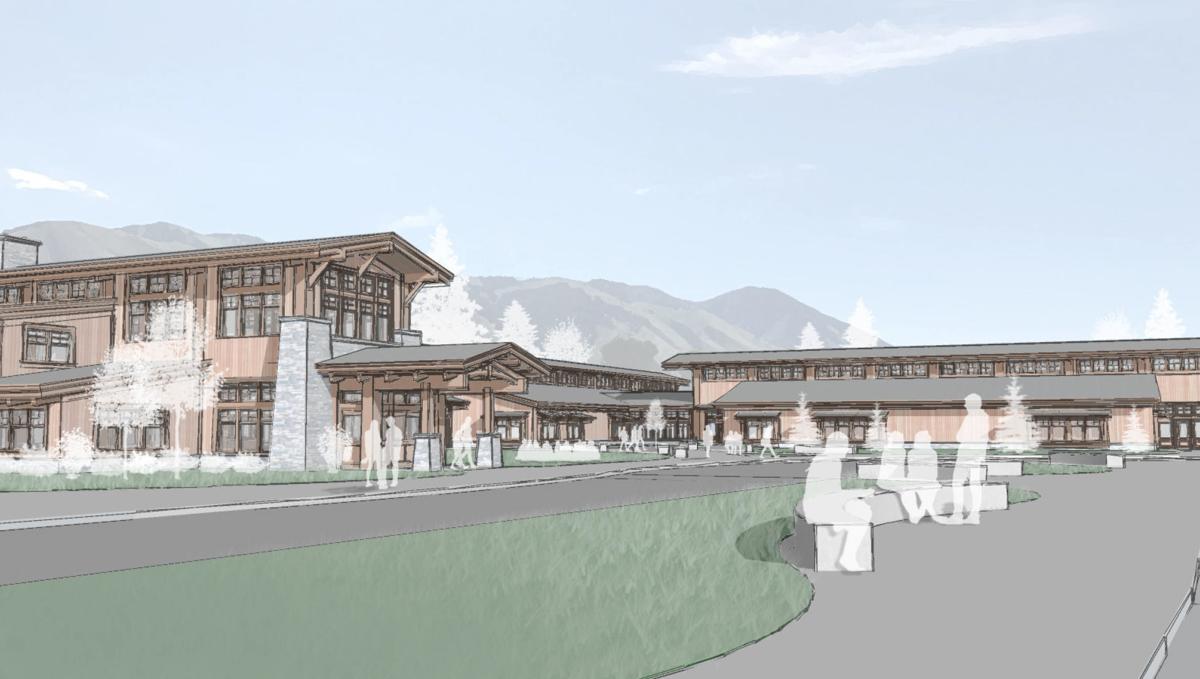 School choice clashed with county control during a House committee debate over a bill to pave the way for the Jackson Hole Classical Academy to build a South Park campus.

Ultimately, six lawmakers voted to move the bill forward to the floor of the Wyoming House of Representatives, where it must pass three readings and win Gov. Mark Gordon’s signature to become law. It passed the Senate on Jan. 23.

The proposal, Senate File 49, provides private schools throughout Wyoming the same exemptions from county zoning granted to public schools. Instead of following county planning processes as they do now, private schools would instead be required to conform “substantially” to Wyoming’s School Facilities Commission guidelines, from restrictions on site size to design standards for walls and roofs.

The legislation stems from the Jackson Hole Classical Academy’s effort to build a school in South Park. The bill would remove Teton County’s zoning authority over private schools, which county commissioners statewide see as an attack on local control. But the academy says it sought legislative relief because Teton County’s planning process has proven too onerous.

Steve Friess, who founded the academy with headmaster Polly Friess, described to the House committee a series of hurdles the school has faced in seeking to build the school through the county’s planning process, including a requirement to file various amendments to rural regulations and legal action from neighbors opposed to the new school.

Teton County turned down the school’s request to adjust regulations to allow a gym and auditorium exceeding 10,000 square feet, the building size limit in the rural zone.

“It is, in fact, the process that killed us, and the way that everything takes months and weeks to go through, and the ability along the way for the process to just be stretched out to the point where we have nowhere else to go but to come here to Cheyenne,” Friess said.

Friess said he believes the bill “provides equality, and all we are really seeking is that a private school be treated identically, in similar fashion in terms of land use issues, with a public school.”

Sen. Eli Bebout, R-Fremont, the bill’s sponsor, said he brought the bill forward because the academy wasn’t being treated fairly, and its students were at risk of losing their school when its lease runs out at the end of the school year.

“That’s the genesis of this bill,” Bebout said.

Testimony in favor of the bill stressed the state Constitution’s provisions ensuring citizens’ rights to opportunities for education. It also focused on the importance of school choice and allowing parents and students to select the school right for their children.

“We should level the playing field between public schools and private schools, with regard to where they can be located,” former U.S. Rep. Cynthia Lummis, a Cheyenne Republican, told the committee, “and recognize that not one size fits all, that there are students that are more appropriate in a different type of classroom setting than a public school.”

Attorney Jason Ochs, an academy parent, said education is the responsibility of the Legislature and emphasized the importance of allowing parents to choose the schools for their kids.

Rep. Andy Schwartz, D-Teton, testified against the bill, arguing private schools shouldn’t receive the same privileges as public schools, because public schools are run by publicly elected boards, which are accountable to all residents of a school district.

“Private schools, by the nature of their structure, have a private board and are essentially only responsible to parents, students and whoever is financing the school,” Schwartz said. “They do not have a direct responsibility to all the residents in the district. That’s a fundamental difference.”

Teton County School District No. 1 Trustee Janine Bay Teske told legislators that the bill isn’t fair, because public schools are required to conduct a public engagement process for building a new school but “there’s no process for a private school to have to go through.

“What this bill allows is it allows for a private school to locate itself in a community with absolutely no public process,” Teske said.

“When I build a home, I’m not going to ask for community input on what they think of my home being built and all the specifications there,” Clem said.

The Teton County Board of County Commissioners opposes the bill and sent a letter to lawmakers criticizing it as a pre-emption of local control. That’s a position shared by several commissioners from other counties who testified against the bill on the grounds that it overrides local country control over planning and zoning.

Jerimiah Rieman, executive director of the Wyoming County Commissioners Association, told legislators that “there’s wisdom in deference to local institutions and the communities and residents that inform them.

“Wyoming’s county commissioners are not asking you to vote against the Jackson Hole Classical Academy, private schools or parent choice,” Rieman said. “Instead we’re asking you to maintain local control to reaffirm your belief in local government in this state.”

Lisa Johnson, who testified on behalf of Friends of South Park, a group that opposes locating the Classical Academy in the neighborhood, said local government, not the state, should control development locations because the counties will have to pay for infrastructure needed by that development. Bob McLaurin also testified against the bill on behalf of the Wyoming Association of Municipalities.

But academy parent Ochs countered that there’s no local control pre-emption because education doesn’t fall under the purview of county zoning authority.

“You can’t take something away that was never theirs in the first place,” Ochs said. “Education is the state’s. Education is your responsibility, not local authority.”

The committee approved the bill 6-3, adding an amendment to make sure the bill would go into effect immediately, rather than in July, so that the academy could start on its new school promptly after a potential passage.

“I encourage private schools,” Furphy said. “I’m concerned this bill opens it up statewide that a private school could be opened anywhere with no regulation from the locals controlling that school.”

September 2017: The Teton County Planning Department proposes a land development regulation amendment to clarify whether that development tool can be utilized on noncontiguous parcels, or whether conserved acres can only grant bonus density when parcels are connected.

November 2017: Teton County Commissioners approve a new regulation clarifying that the development tool can indeed be used on noncontiguous parcels, allowing for permanently conserved acres in one area of the county to be utilized to access bonus square footage elsewhere in the county.

September 2018: Teton County planners issue recommendations to deny the Academy's proposed new regulations regarding hours of operation and building size, saying the proposals don't adhere to comprehensive plan goals of creating predictability for what neighbors can expect in certain areas of the county.

October 2, 2018: South Park neighbors file an appeal of an environmental study conducted by the Classical Academy to assess natural resources and impacts of development at the proposed school site. The appeal places an automatic freeze on the Academy's plan to build a new school.

December 18, 2018: Following a daylong meeting and hours of public comments, Teton County commissioners approve the Academy's proposal to allow schools in rural zones to operate starting at 7 a.m. instead of 9 a.m.

December 20, 2018: County commissioners vote to dismiss South Park neighbors' appeal of the Academy's environmental study, lifting the freeze on the effort to build a new school.

January 10, 2019: The Classical Academy hosts a legislative dinner in Cheyenne that features performances from students and encourages support for private schools.

January 15, 2019: Teton County commissioners vote to send a letter to Wyoming Legislators opposing Senate File 49 on the grounds that it seeks to preempt local zoning control.

Teton County commissioners held a workshop Monday to consider revamping its regulations in response to the filing of Senate File 49, which they feel preempts local zoning authority over private schools.
Commissioner Greg Epstein asked the board how it can rework its regulations to deflect legislation at the state level that seeks to undermine county regulations.
“Unless we do certain things within our code, I don’t see this end-around legislation ending anytime soon," Epstein said.
As part of its plan to build a new school in South Park, the Classical Academy submitted an application to revise the regulations for all the county's rural areas to allow for 30,000 square feet (rather than the currently required 10,000 square feet) for certain buildings. That was the only path for the Academy because it couldn’t ask for a one-time exception to the rules, as variances for building size aren’t allowed.
In land use, a "variance" allows for an exception to county land use rules regulating development. In 2015, new Teton County regulations limited what qualities of a development could be varied, in an effort to establish predictability for what neighbors could expect to see on properties throughout the county. The existing regulations don't allow for exceptions to requirements like density, scale of development, minimum lot size, or maximum building size.
The county has also recently been sued twice in cases related to the variance limitations. Both suits, filed by attorney Mike Clement, have argued that Teton County is the only county in the state that unconstitutionally prohibits important types of variances, and that the prohibition violates citizens' right to due process and equal protection.
Commissioners were mixed in their visions for how best to proceed. Some felt adjustments to address the Academy’s building size situation were in order.
“I’d like to see staff come back with a larger building size for private schools, daycare, maybe medical facilities in the rural district and other districts,” Commissioner Mark Barron said. "I’d also like to see them come back with a variance that can work.”
Others felt the better route would be to look at the county's various zones and determine which are appropriate for uses like schools or bigger building sizes, and use rezoning as a more precise tool rather than changing variances.
“There are regulations that deliver a clear message of, ‘You can do something here, and you cannot do something here.’” commissioner Mark Newcomb said. “It’s fairly clear, and I think we should strive for that.”
Commissioners agreed to prioritize the issue in the coming year, but commissioner Luther Propst said the decision may be made by the legislature with SF49.
“We don’t know what authority we’re going to have at the end of this session,” Propst said.