The County Commission talked Thursday about the results of a 2019 employee survey showing a pervasive lack of trust in county elected officials.

The conversation, which came during the board’s goal-setting retreat, was the first time in over a year that the board had discussed the survey at length.

Some saw that as a problem.

“It felt like it took an awful long time and somewhat circuitous route to get here,” Commissioner Mark Newcomb said of the discussion about improving the survey’s low scores.

The News&Guide reported on the survey in October, and County Administrator Alyssa Watkins said then that an update would be presented to the Teton County Board of County Commissioners by Nov. 2.

That presentation never happened in a public meeting.

In the survey, conducted in November 2019, employees rated how much they agreed with statements about teamwork, communication, leadership and opportunities for growth. Workers’ answers were then pooled and compared against results from other organizations.

Opinions of the county’s elected officials were low. Among other things, the survey asked employees whether they thought the electeds would “take action based on the results of this survey.” 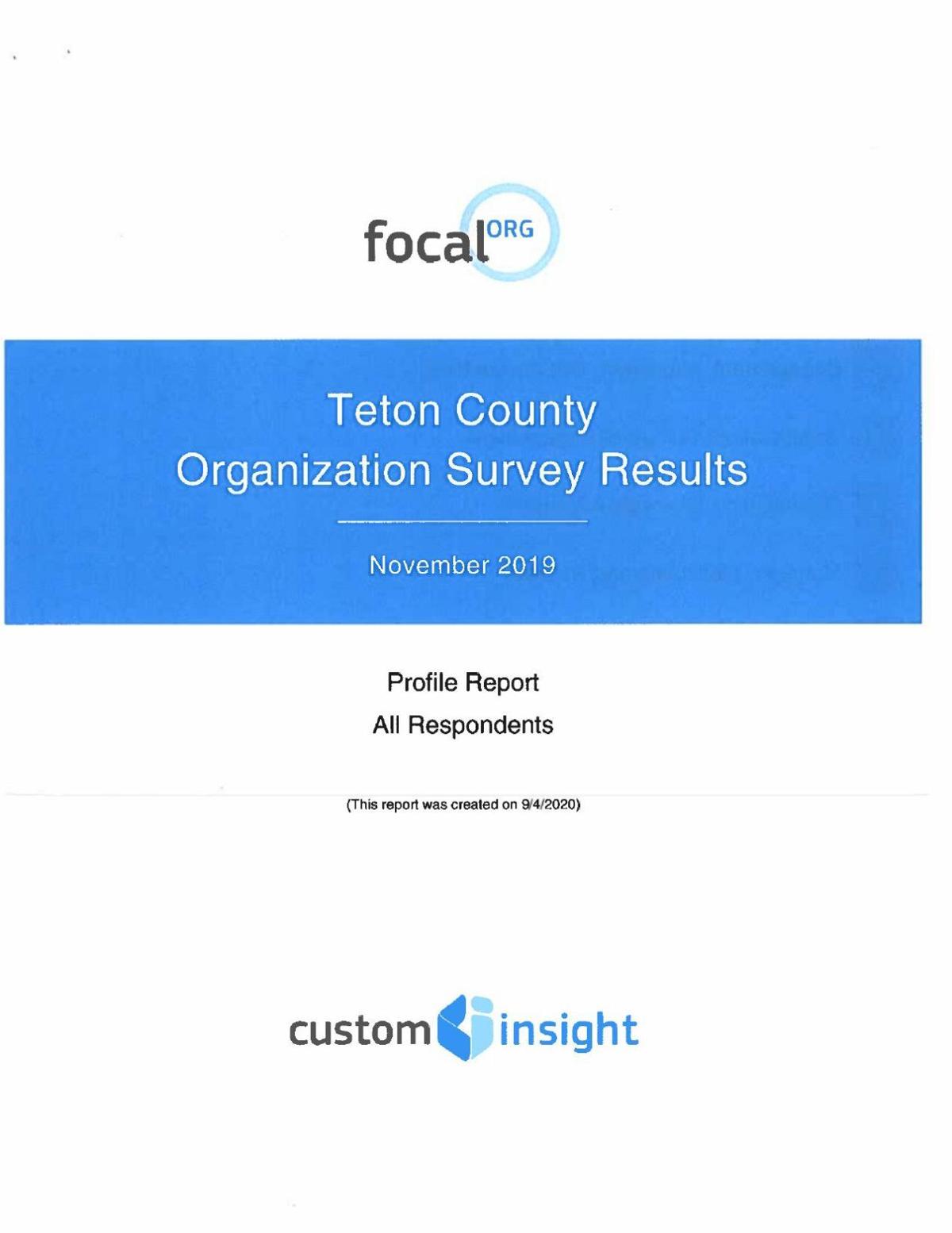 On a scale of 1 to 100 the county received a 2. Along with another question about elected officials, that score was its lowest.

The county scored a 37 overall, though managers and department heads fared better than elected officials.

Along with the five-member Teton County Board of County Commissioners the county has seven elected positions: the assessor, treasurer, clerk, attorney, clerk of district court, sheriff and coroner. There are employees in every elected office, and the County Commission oversees a number of departments like Public Works and the Health Department.

Information about how other elected offices fared compared to the commission has not been made public. Instead, results have been aggregated countywide.

Watkins is the intermediary between commissioners and the departments beneath them. She said managers have reviewed results specific to their offices and made plans to improve them. The administrator went on to say the county has set up a “suggestion box,” purchased a new “learning management system” to guide employee training, and has begun hosting “one-on-ones.”

Watkins said the “biggest step” the commission has taken in response to the survey results is approving a new employee manual, which offers employees new benefits. Other department heads pointed to the board’s recent decision to approve employee pay raises as a positive step.

But the commission has not reviewed feedback and made a plan to address it as individual departments have, Watkins said.

Some commissioners suggested the County Commission wasn’t responsible for addressing the survey. But April Norton, director of the Jackson/Teton County Housing Department, disagreed. Other department heads did as well.

“The commission, I think, scored a 3 out of 100 on ‘Are you going to do anything about the survey?’” the housing director said Thursday,

She said the commission faces real challenges like retaining its best staff members.

“For me and for my team,” Norton said, “it’s really important that we hear from the County Commission that those things are important, and that there’s a response from the commission that’s not necessarily staff driven.”

The commission did eventually agree to take action of its own.

Commissioner Luther Propst argued for creating a plan to deal with the employee survey. He also wanted to resurvey county employees and set up a retreat with other elected officials to discuss solutions.

“I want to make sure we’re not in the weeds,” Propst said. “But I also want to provide guidance and priorities and some framework for evaluating how we’re doing.”

Propst and Macker’s suggestions appeared to win the support of the rest of the board. But how exactly the commission will address the issue has yet to be decided.