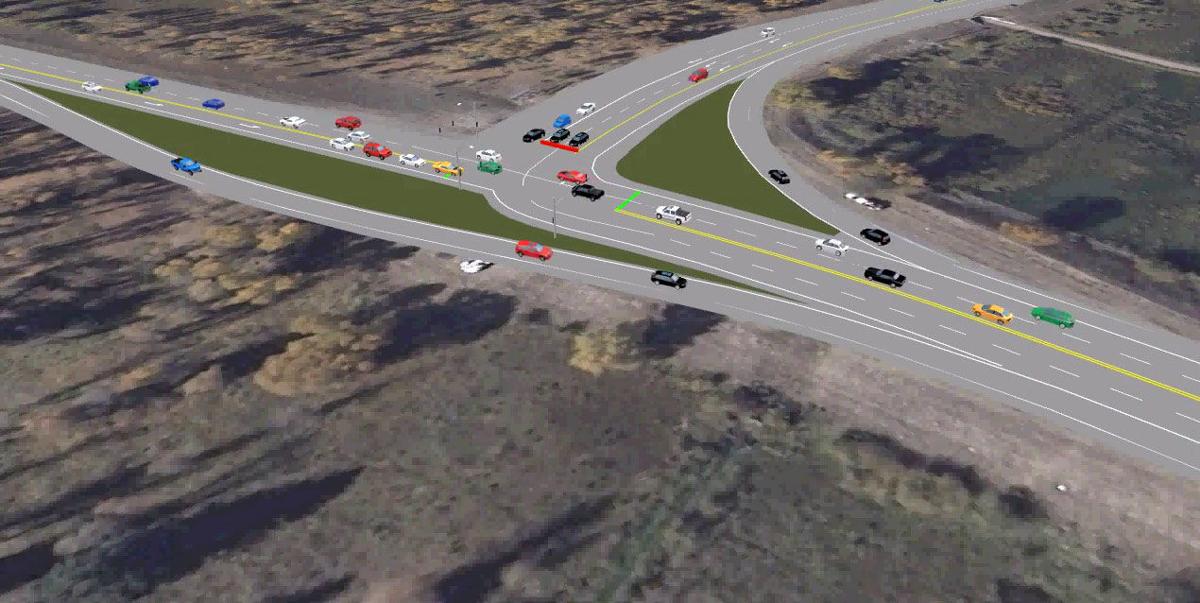 Wyoming Department of Transportation plans for the intersection at Highways 22 and 390 call for a “Florida T” design, which adds a continuous green-light bypass lane traveling east along Highway 22. 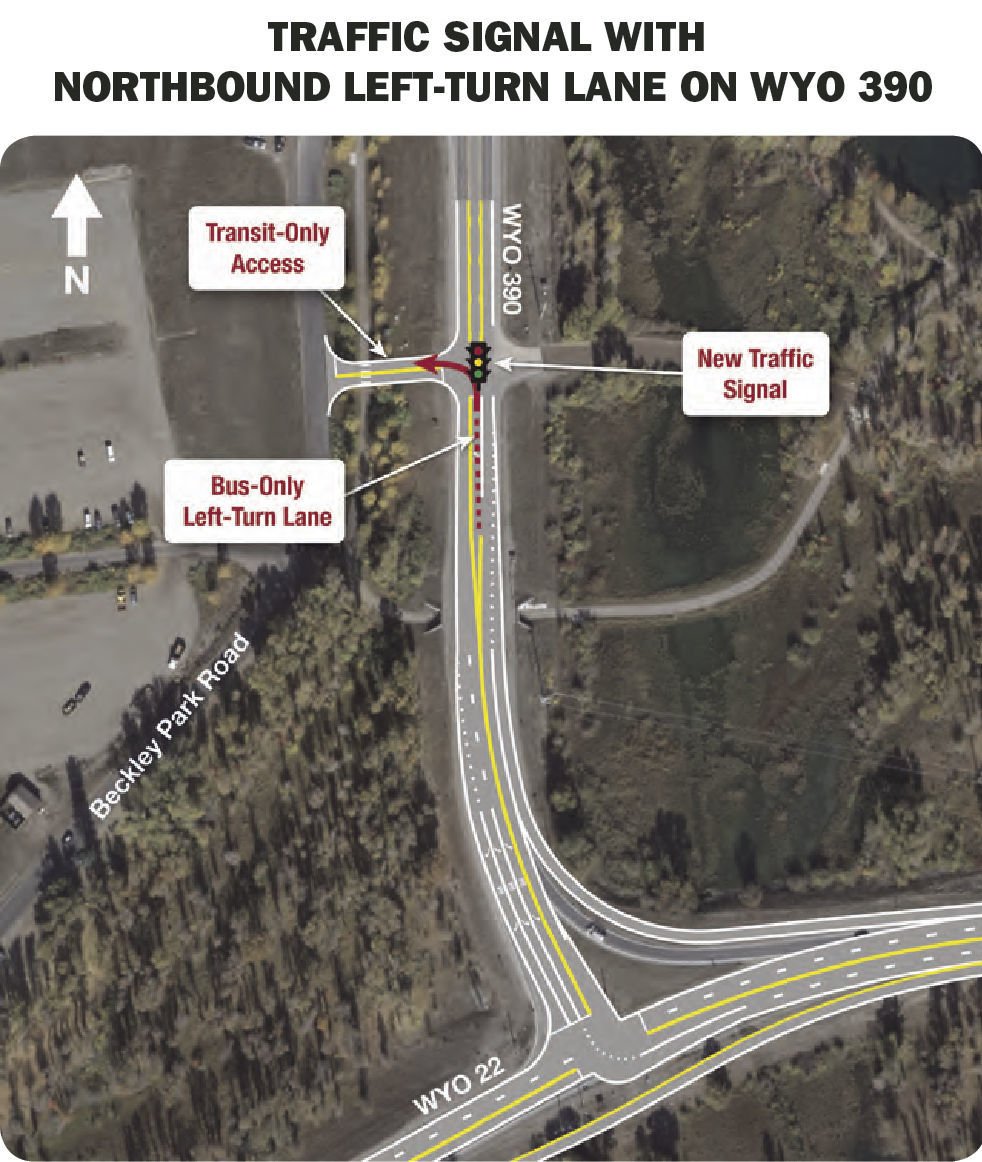 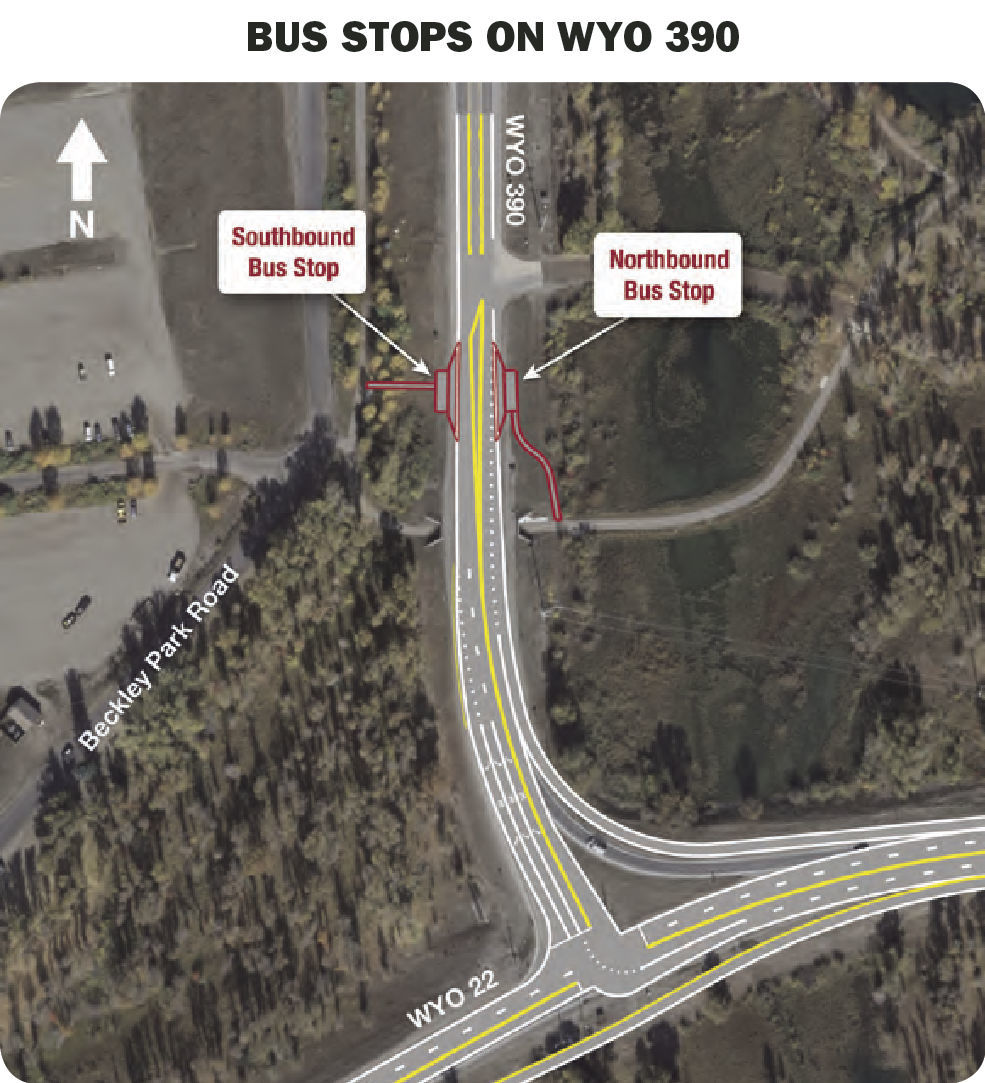 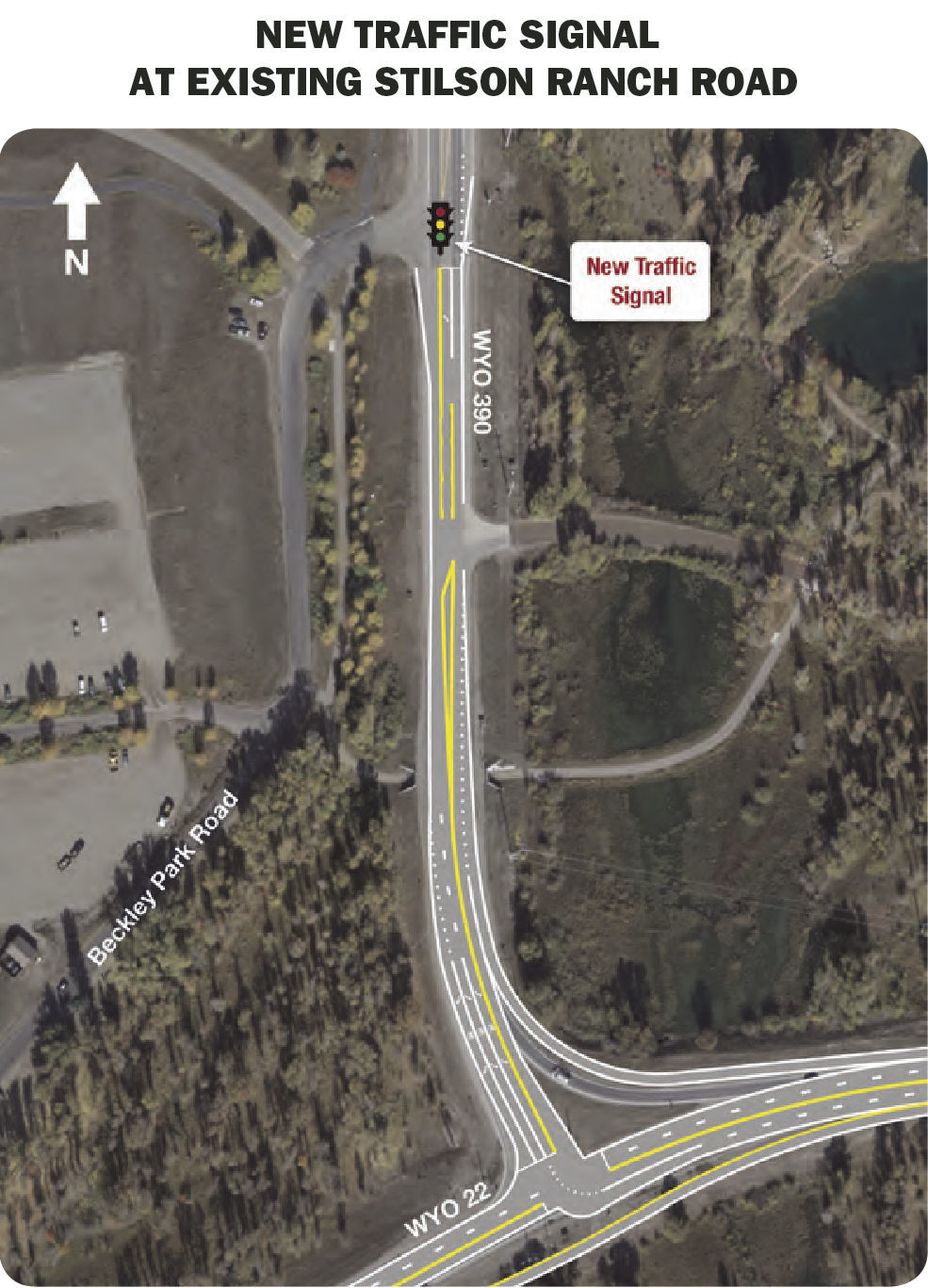 Wyoming Department of Transportation plans for the intersection at Highways 22 and 390 call for a “Florida T” design, which adds a continuous green-light bypass lane traveling east along Highway 22.

Some stakeholders have “heartburn” over a Wyoming Department of Transportation study that dismisses bus and carpool lanes, saying that decision will thwart efforts to get cars off the road.

Wyoming Department of Transportation consultants are recommending against dedicated carpool or transit lanes at the junction of Highways 22 and 390 and the Snake River bridge. WYDOT plans to revamp and widen the intersection, but consultants concluded there would be no need for high-occupancy vehicles lanes, or HOV lanes, because the wider road will reduce congestion.

That’s not sitting well with some in the stakeholder group.

“That’s giving me a bunch of heartburn,” said Jack Koehler, Friends of Pathways program manager and member of the WYDOT project’s stakeholder group.

“WYDOT’s on a plan to expand the footprint of 22 and 390,” he said. “We’re going to add travel lanes, which is going to encourage the use of single-occupancy vehicles, in direct conflict with our comp plan.”

The Teton County/Jackson Comprehensive Plan and Integrated Transportation Plan set a goal to use transportation like buses and bikes to mitigate growth, traffic and carbon emissions.

For Koehler, adding HOV lanes creates incentive for people to carpool or take the bus.

The debate over HOV lanes is surfacing because WYDOT is planning a reconstruction of the intersection at Highways 22 and 390. WYDOT runs the highways, and the town and county run the START bus.

Still, WYDOT agreed to pay up to $120,000 for a report on how to ensure the intersection and bridge redesign could accommodate local transit into the future, WYDOT Resident Engineer Bob Hammond said.

“The town and county are in charge of their transit program, and it uses state highways, so what we want to do is make sure our project doesn’t do something that hinders the transit program,” Hammond said.

Released Monday, the draft study will be discussed at a public meeting about the project from 5 to 7 p.m. Thursday at the SpringHill Suites Conference Room, 150 W. Simpson Ave. Instead of HOV lanes the consultants suggest putting an additional traffic light on Highway 390 that would prioritize buses at signals and moving the Stilson bus stops to be right on the highway.

“Our purpose was identifying what transit-oriented improvements should be considered in the design of the 390/22 intersection,” Kimley-Horn consultant Brent Crowther said.

WYDOT plans to replace the Snake River bridge and nearby Highway 22/390 intersection in 2023. The existing bridge is at the end of its life, engineers say, and its narrowness and traffic volume make maintenance a challenge. The bridge is the only link to Wilson and the West Bank, and WYDOT combined the projects because the intersection of Highway 22 and 390 is so close to the bridge.

The plan is to build a new four-lane bridge with a median spanning the Snake River. Further, the intersection is planned to be a “Florida T,” which entails widening the main road to four lanes while also providing a couple of “slip” lanes for vehicles that don’t have to stop at the intersection (eastbound on Highway 22 and westbound turning right onto 390).

The town and county’s 2015 Integrated Transportation Plan includes a goal to convert the Teton Village bus route to Bus Rapid Transit, calling for a bus or HOV lane along Highway 22, as well as prioritization at intersections.

Kimley-Horn transportation consultants reviewed eight strategies, based on reduced travel time and mileage for buses. The top idea, according to the study, is adding a traffic signal on Highway 390, either at the boat launch access (price tag $300,000) or the intersection with Stilson (price tag $210,000). They recommend pairing that with relocating the bus stops to Highway 390 rather than requiring buses to travel through Stilson — reducing travel time and distance for the bus, as outlined in the 2015 Stilson Master Plan (price tag $165,000).

Another recommendation is to add signal priority for buses throughout the corridor.

Despite their inclusion in the town and county goals, Crowther said buses running on shoulders and dedicated transit or carpool lanes were not evaluated in depth. When WYDOT builds the four-lane bridge and revamped intersection the highway will have so much added capacity for traffic that there won’t be enough traffic to justify a separate bus-HOV lane or queue jump, he said.

Without significant queues to bypass, the benefit of a queue jump lane to START buses is modest, ranging from nine to 15 seconds, the study said.

Hammond and Crowther said consultants were asked only to consider the bridge and intersection rather than the entire Highway 22 corridor. A lack of bus lanes in the 2023 project doesn’t rule it out for the rest of Highway 22 in the future.

Still, some local people were disappointed that the report didn’t recommend any sort of dedicated carpool or bus lane for the bridge and intersection.

“They are not obviously implementing any changes to the length of 22 between the bridge and town at this point in time, but it’s an opportunity to set the tone and clarify what the future plan is,” Turley said. “Even making HOV lanes across the bridge and into the intersection, at least going westbound, would be a great way to start prioritizing transit and allowing it to travel more efficiently right away.”

Koehler suggested adding a stipulation that when new lanes are added, lanes would convert to HOV when travel times hit a certain threshold.

“I’d like to see an analysis of adding either shoulder-running transit service or a dedicated transit HOV Lane,” Propst said. “Instead, they segmented this so they’re only looking at the bridge and the intersection.

“That’s going to make it more difficult to promote transit as we look at the future of Highway 22 and 390.”

This article has been updated to reflect Melissa Turley's title at the Teton Village Association. — Eds.

WYDOT is hosting a public meeting Thursday from 5 to 7 p.m. to present the transit review. An open house will run from 5 to 5:30 p.m., followed by a presentation at 5:30 p.m.

See a simulation of the Florida T intersection and read the WYDOT report at JHNewsAndGuide.com.

Our transit program is designed to allow expanded residential and commercial development.

Stop all the new pavement; try behavioral modifications first (e.g. car pool/HOV lanes). That intersection is CRITICAL wildlife habitat, and as such does not need more pavement to handle the rush hour traffic.