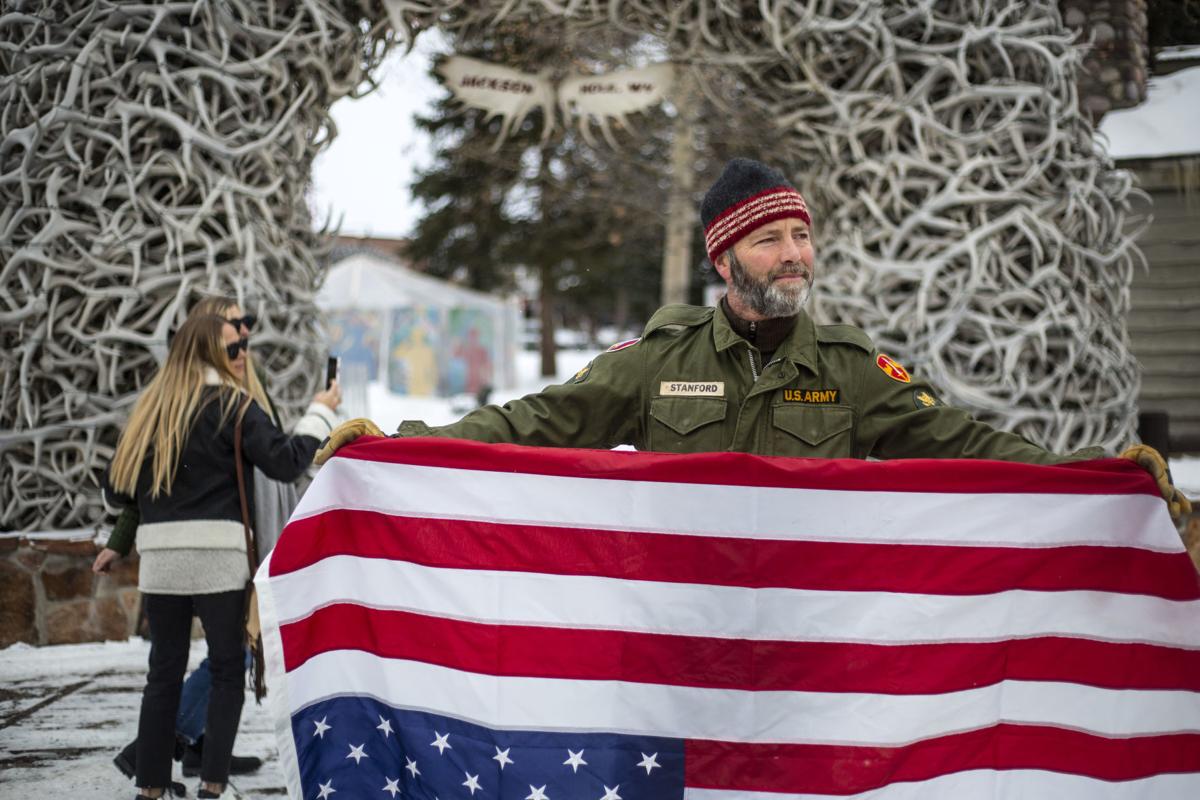 Jim Stanford, wearing his father’s Vietnam-era U.S. Army jacket and flying an upside-down American flag Feb. 5 on Town Square, protests the U.S. Senate’s acquittal of President Trump on charges of abuse of power and obstruction of Congress. “I don’t take this lightly,” said Stanford, a Jackson Town councilor. “This is a powerful symbol that the republic is in distress. Democracy is participatory, and it requires all of us to keep it going.” 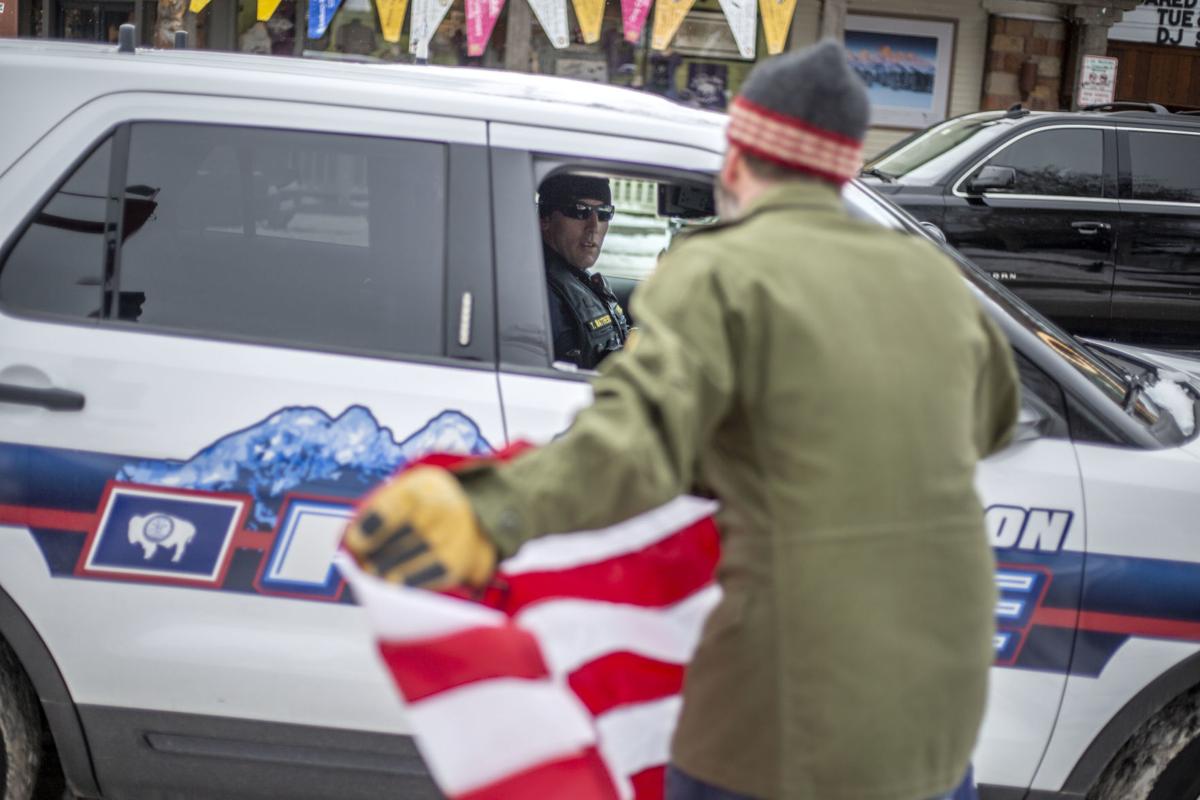 Sgt. Tony Matthews of the Jackson Police Department checks in on Jim Stanford on Feb. 5 during his protest on Town Square. After determining Stanford was not in distress and was exercising his First Amendment rights, Matthews moved on.

Jim Stanford, wearing his father’s Vietnam-era U.S. Army jacket and flying an upside-down American flag Feb. 5 on Town Square, protests the U.S. Senate’s acquittal of President Trump on charges of abuse of power and obstruction of Congress. “I don’t take this lightly,” said Stanford, a Jackson Town councilor. “This is a powerful symbol that the republic is in distress. Democracy is participatory, and it requires all of us to keep it going.”

Sgt. Tony Matthews of the Jackson Police Department checks in on Jim Stanford on Feb. 5 during his protest on Town Square. After determining Stanford was not in distress and was exercising his First Amendment rights, Matthews moved on.

The temperature hovered around 20 degrees Fahrenheit on the afternoon of Feb. 5, when Jackson Town Councilor Jim Stanford stood on Town Square to protest the U.S. Senate’s vote to acquit President Trump.

Wrapped in his father’s Vietnam-era U.S. Army jacket, he wasn’t dressed adequately for more than two hours in the cold. Near the end he began to shiver.

“I knew a down puffy was a much more practical item to wear,” he said. “But when I tried it on I knew it was the right choice.”

Some prominent veterans vehemently disagree. In a letter to the News&Guide, American Legion Post 43 members T. R. Pierce and Ed Liebzeit said they were “shocked, offended, appalled and saddened” by Stanford’s “complete disregard for the U.S. military.”

“We served in the U.S. military knowing that we were protecting and guaranteeing the right of free speech for all U.S. citizens,” they wrote. “He certainly has a right to protest but his method of disrespect is disgusting and demonstrates behavior that demands that we and others speak out.”

The other, which deals with the issue of stolen valor, states that whoever “with intent to obtain money, property, or other tangible benefit, fraudulently holds oneself out to be a recipient of a decoration or medal described in subsection (c)(2) or (d) shall be fined under this title, imprisoned not more than one year, or both.”

Someone reported Stanford to Jackson Hole Police. According to the next day’s blotter, “Sgt. [Tony] Matthews checked on the man and determined he was exercising his freedom of speech under the 1st Amendment. No crime there, so Sgt. Matthews moved on to other issues.”

Stanford insists he meant no disrespect and sought only to convey a message of protest. In wearing his father’s Army jacket he felt he was honoring his dad and the values for which he and millions of others have fought.

“He served so that someday I could have all these rights and freedoms,” he said, “including the right to exercise free speech.”

Besides wearing the Army jacket, Stanford displayed an American flag upside down, a sign of “dire distress” often used in political protest. Nearly every person he spoke to asked him about the unusual orientation, to which he responded, “The republic is in distress.”

In a vote almost entirely along party lines, the Senate decided Feb. 5 not to impeach President Trump, prompting critics to castigate Republicans — with the exception of Sen. Mitt Romney, of Utah, the first senator ever to vote to impeach a president of his or her own party — for what they deemed an abdication of the duty to judge the president impartially.

In particular, Stanford leveled his disapproval at Wyoming’s senators, John Barrasso and Mike Enzi, both of whom voted to acquit.

At the time Stanford acknowledged his response was a “potent symbol,” adding that “I don’t take this lightly.” But nevertheless, he has been surprised at the intense scrutiny over what he called a “personal choice” of attire.

“You should be able to wear something that’s part of your family heritage,” Stanford said. “That’s your decision.”

Pierce and Liebzeit, who said their complaints had “nothing to do with politics,” also argued that he “misled many people,” who may have judged by the name on the jacket that he was protesting as a veteran. Stanford told anyone he spoke to that it was not his own, but those who drove or walked by without stopping to ask may have presumed otherwise.

To that point, he said, “I don’t want to be dismissive of their concerns.” He said he would consider them in the future.

It was far from the first time he wore the jacket, even in protest. It may not be the last time. But, he said, “maybe I’ll give it some more thought before I do it again.”

This is how the taxpayer supported local government shows itself off, then I would say the town is in distress. I would suggest, A) get a job if anyone would hire you. B) resign from public office and again get a real job, maybe one that doesn't require taxpayer support.

Good to see true American heroes, our veterans, speak out on the issue and call Stanford out. I love how you wrote the article Cody, making him out as an all out hero, freezing ro near death in the cold Wyoming air. Then I read an op ed, from the rest of your gang, supporting this disgraceful behavior. Be careful which base you lean to. Better to remain neutral when you want to keep your livelihoods in tact.

Good reporting to share all the perspectives here. I think Ken's idea of "neutral" reporting is reporting that only shares his personal viewpoint. I'm sure he can find some opinionated "fair and balanced" reporting on cable television that reinforces his world views if that's what he wants.

You nailed it Daniel. I’m an Honorably Discharged Vet. I don’t necessarily agree with the councilman’s choice of wardrobe but I would fight to the death to defend his right to wear it.

It always amazes me how people like Chison comes on to this site to gripe about what’s written because as you so clearly stated it doesn’t support his world views. There’s a word for people like that, their called trolls.

Companies find that false claiming military service ranks second behind false claims to academics and degrees during recruitment. My military experience is over 40 years past, but today's employers recently demand to see a DD-214 as they would a degree. Oddly, they scrutinize now more than they did during my post discharge days. I had to dig deep into my archive box to dust it off and find it. False claims now lead to immediate termination. Also see the Stolen Valor Act of 2005. This was signed by Bush and upgraded and signed again by Obama. It received a 100% of the voting approval in the US Senate. Fortunately, this guy didn't display his father's ribbons, otherwise he might be hearing from the Fed. He misrepresented himself using someone else's uniform. So far not a crime in this country, but travel north a bit and in Canada it is a crime. It is stolen valor and as an elected representative of Jackson, WY, it only shows that there are lots just like him around here.