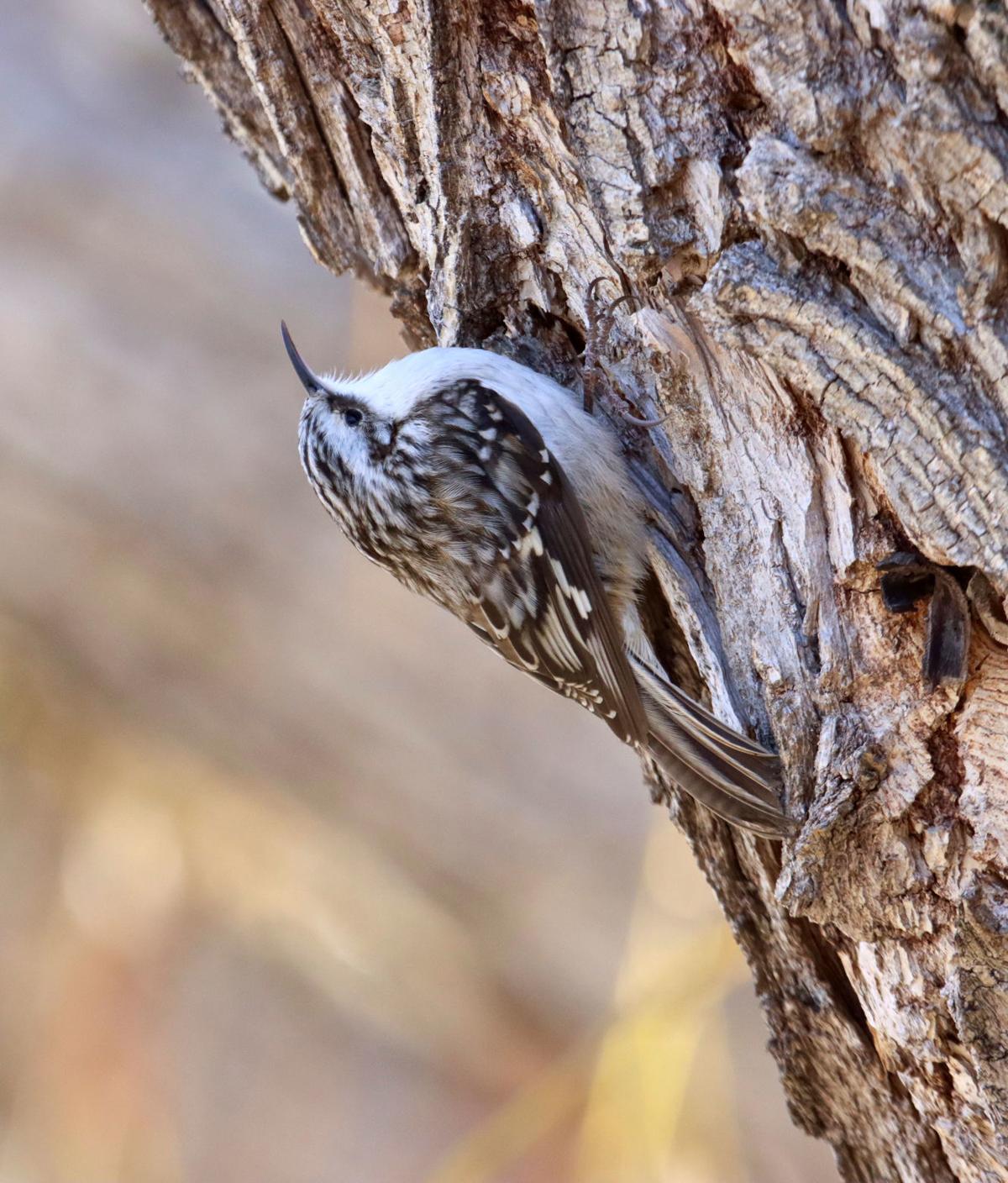 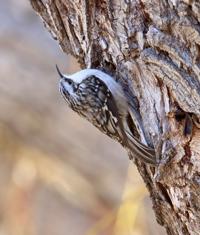 A brown creeper visits a golden willow in town. 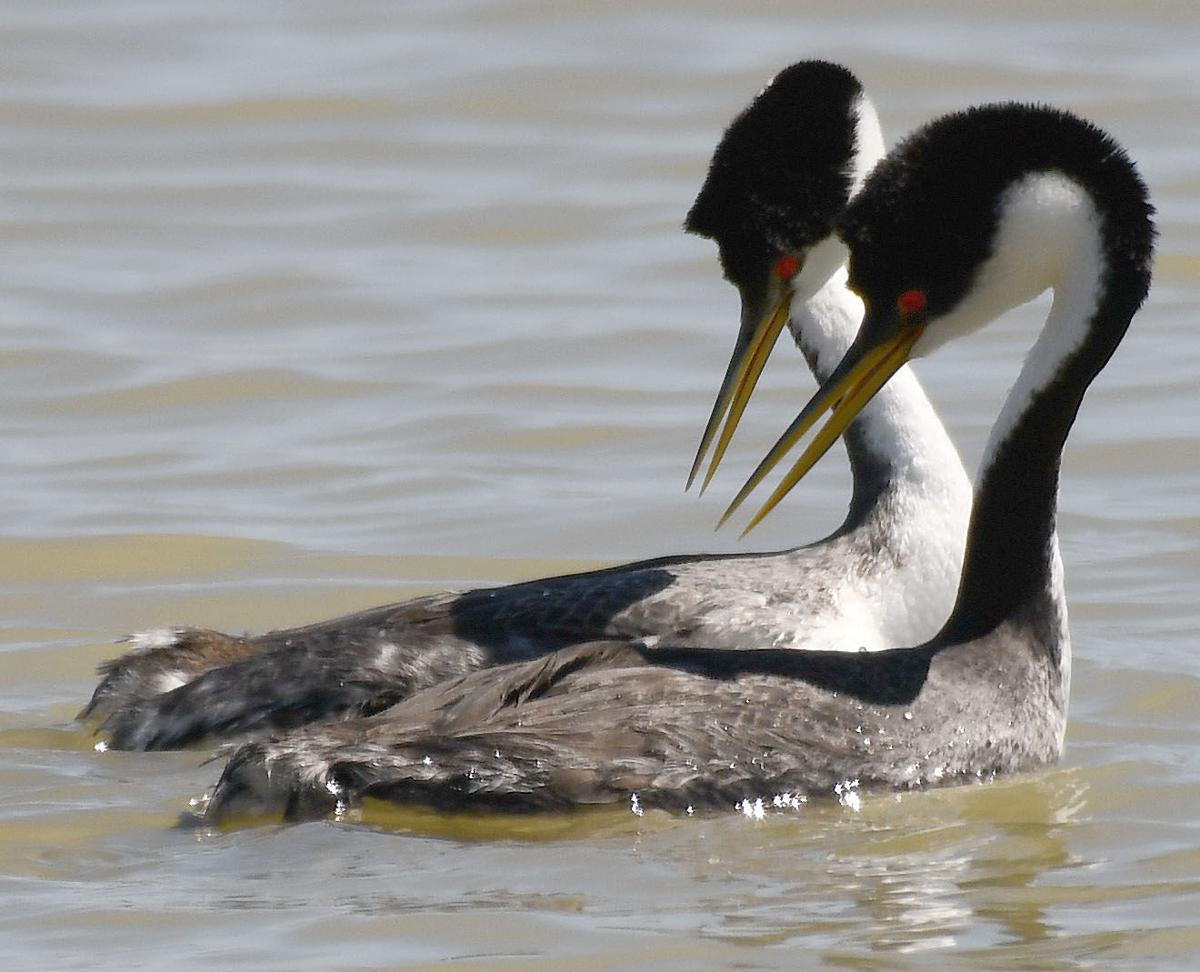 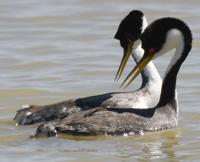 Wes and Shirley Timmerman saw these courting western grebes at Utah’s Bear River Migratory Bird Refuge on April 12. Both western and Clark’s grebes (similar size, marking, red eye and body color, but the neck and face white area extends to include the eye of the Clark’s) are common in spring and nest at the Bear River Refuge, Both species are uncommon there in the summer, fall and winter.

A brown creeper visits a golden willow in town.

Wes and Shirley Timmerman saw these courting western grebes at Utah’s Bear River Migratory Bird Refuge on April 12. Both western and Clark’s grebes (similar size, marking, red eye and body color, but the neck and face white area extends to include the eye of the Clark’s) are common in spring and nest at the Bear River Refuge, Both species are uncommon there in the summer, fall and winter.

Eric Cole observed a prairie falcon diving on a flock of rosy finches in the immediate aftermath of last week’s snowstorm. All of the finches appear to have escaped.

Although elk continue to migrate off the National Elk Refuge there are still 3,000 to 4,000 of them and 300 bison on the refuge. Three wolves have been observed hunting elk in the Poverty Flats area.

During the week of April 18, Bev Boynton saw a kestrel on Mormon Row, four beautiful male northern shovelers with three females below the Sawmill Pond pullout, shoveling upstream in a line, vocal goshawks, porcupine tracks high on Blacktail Butte, along with a half-dozen piles of elk and wolf scat.

On Blacktail Butte, Bev found increasing twinpods, buttercups, phlox and such, red paintbrush and several mertensia/chiming bells. Many buttercups and spring beauties and one steershead in bloom.

AJ DeRosa reports seeing a pine marten at his tipi camp, a first. He’s seen them in the mountains but never in the valley.

Katherine Gura reports that buttercups have blossomed in the sage flats. She also saw 14 hooded mergansers as well as two cinnamon teals this week.

KO Strohbehn took an evening drive along Antelope Flats heading toward Kelly and saw two lovely lady moose standing close to the road on the west; a huge herd of elk in the field south of Kelly Warm Springs (200-300) and 10 bison on a distant berm on the west side of Gros Ventre Road.

Franz Camenzind always enjoys the two to three weeks around Earth Day, knowing that it’s the season when our wolf and coyote pups are being born, safe within Mother Earth’s sheltering embrace. His lawn-nibbling Canada goose pair is nesting along Flat Creek while the mallards are paired and patiently waiting for warmer weather. Aren’t we all. The creek has also been providing fish for kingfishers and osprey, and aquatic insects for a pair of water dippers. A healthy Flat Creek supports so much more than just fish. Franz also had a brown creeper working his golden willow tree limbs.

He was heartened to watch a prairie falcon flying over a historic cliff aerie on April 20. (At least one young fledged at the site last year.) And the same day an adult golden eagle was seen incubating on a freshly “greened and refurbished” nest while its mate flew high overhead. (This aerie produced at least one eaglet in 2013. The territory likely has one or more not yet discovered alternate nests.)

Both species of chickadees are investigating the bird boxes at Franz’s. Two blue jays are making sporadic flybys of the feeder after being absent from Dec. 30 to March 5. And last, he counted 65 bighorn sheep on the Elk Refuge.

In their South Park yard Wes and Shirley Timmerman have seen robins, ravens, magpies, house finches and starlings. After sanitizing for salmonella, perhaps it’s time to put the feeder up in the backyard again.

At the Bear River Migratory Bird Refuge in Utah on April 12, Shirley and Wes saw 26 species of birds, including thousands of tree swallows, which are listed as uncommon in the spring and rare in the summer at the Bear River refuge.

Deb Patla found that Columbia spotted frogs started egg deposition this past week on the Elk Refuge, at sites tracked through a long-term amphibian monitoring project. A few days later than last year. Has anyone heard chorus frogs calling yet? Deb saw her first-of-the-year marsh wren on the Elk Refuge and brightly plumed bufflehead ducks. In Buffalo Valley osprey are back at one of the nests, a few snipe are winnowing, and a saw-whet owl is calling.