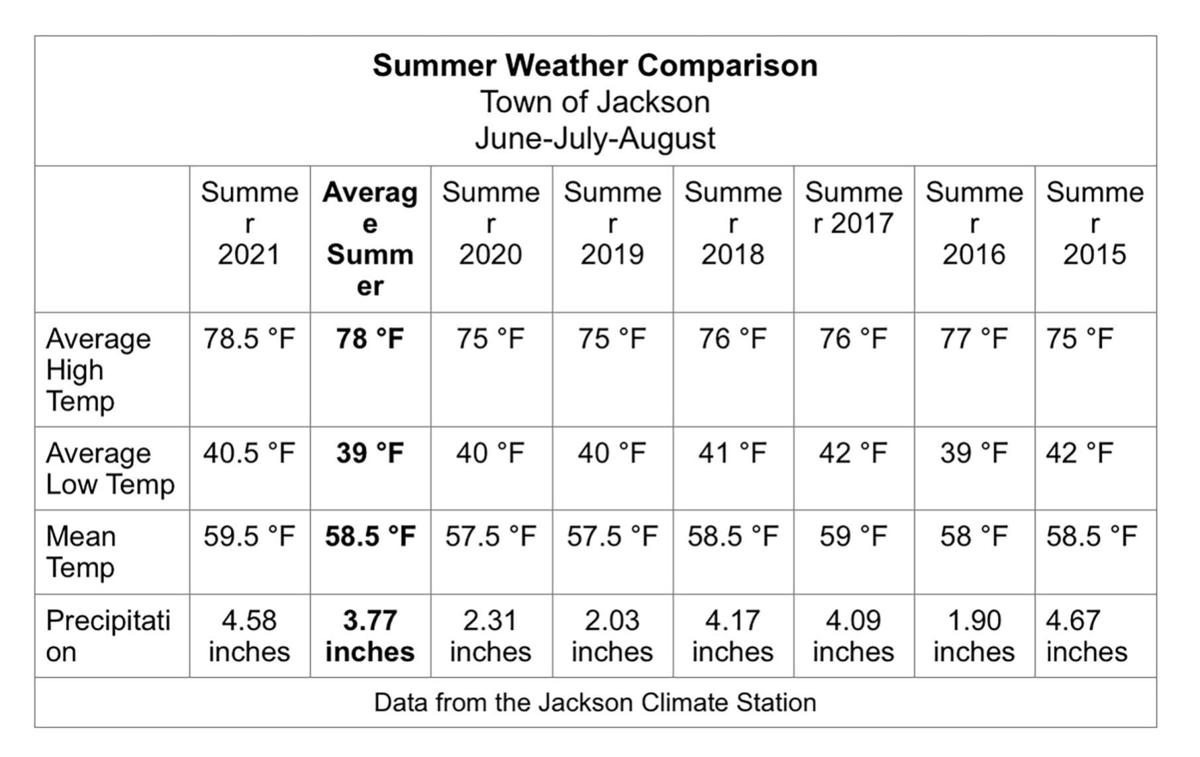 We are two weeks away from the fall equinox on Sept. 22, but our meteorological summer is already officially over. The hot and dry of June and July consumed the majority of this summer season, while August brought temperatures and moisture back into balance here in Jackson.

In this week’s column I’ll review the past three months’ weather data from the Town of Jackson Climate Station and see how this summer shaped up compared to recent summers and to the long-term averages.

June had an average high temperature of 78 degrees, which was 6 degrees warmer than normal. It felt exceptionally hot, more like it does here in a normal July. June 2021 was warmer than it has been in the last 15 years. June also tallied 15 days with high temperatures of 80 degrees or warmer.

The hottest day of the summer in Jackson was on July 19, with an official high temperature of 89 degrees. It may surprise you that it never officially hit 90 degrees at the Jackson Climate Station this summer.

The coldest temperature of the summer was on Aug. 29, with a morning low of 28 degrees. Overnight low temperatures were about 1.5 degrees warmer than normal this summer.

Last summer’s average mean temperature was 1 degree cooler than average. But, believe it or not, last summer was a much drier summer than this one.

Total precipitation in June and July of 2021 was only 1.09 inches. We received more rain than that in town during first five days of August this year, with a good surge of moisture from the monsoon.

NOAA’s official climate data base, from the National Center for Environmental Information, the final clearing house for all climate data, has not validated August 1930’s data. The 4.83 inches is not listed in Jackson’s records, so I must conclude they found it to be erroneous and tossed it out.

Suffice it to say, August 2021 was either the second or third wettest August in Jackson’s weather history, behind 1945 and possibly 1930.

Summer of 2021’s total precipitation for June, July and August was 4.58 inches. That is nearly twice the amount of rain we received last summer, which was only 2.31 inches for the three months. Jackson’s average summer precipitation is 3.77 inches.

This summer ended up being the wettest summer we have had since 2015. You may recall that all of the early forecasts for this summer said we would be drier than normal. Thanks to August’s deluge of precipitation that did not come true. And, thankfully, it now looks like at least northwest Wyoming will be spared from a disastrous fire season like we had in 1988, which, back in June of this year, was also anticipated by many to happen.

Looking at our total water for the year, through August, the town of Jackson has received 11.07 inches of precipitation. The long-term average precipitation through the first eight months of the year is 10.58 inches. That puts us almost a half an inch above average for precipitation at this point. Again, thanks to August.

Jim is the chief meteorologist at MountainWeather.com and has provided a weather forecast for Jackson Hole and the Teton Range for the last 30 years.