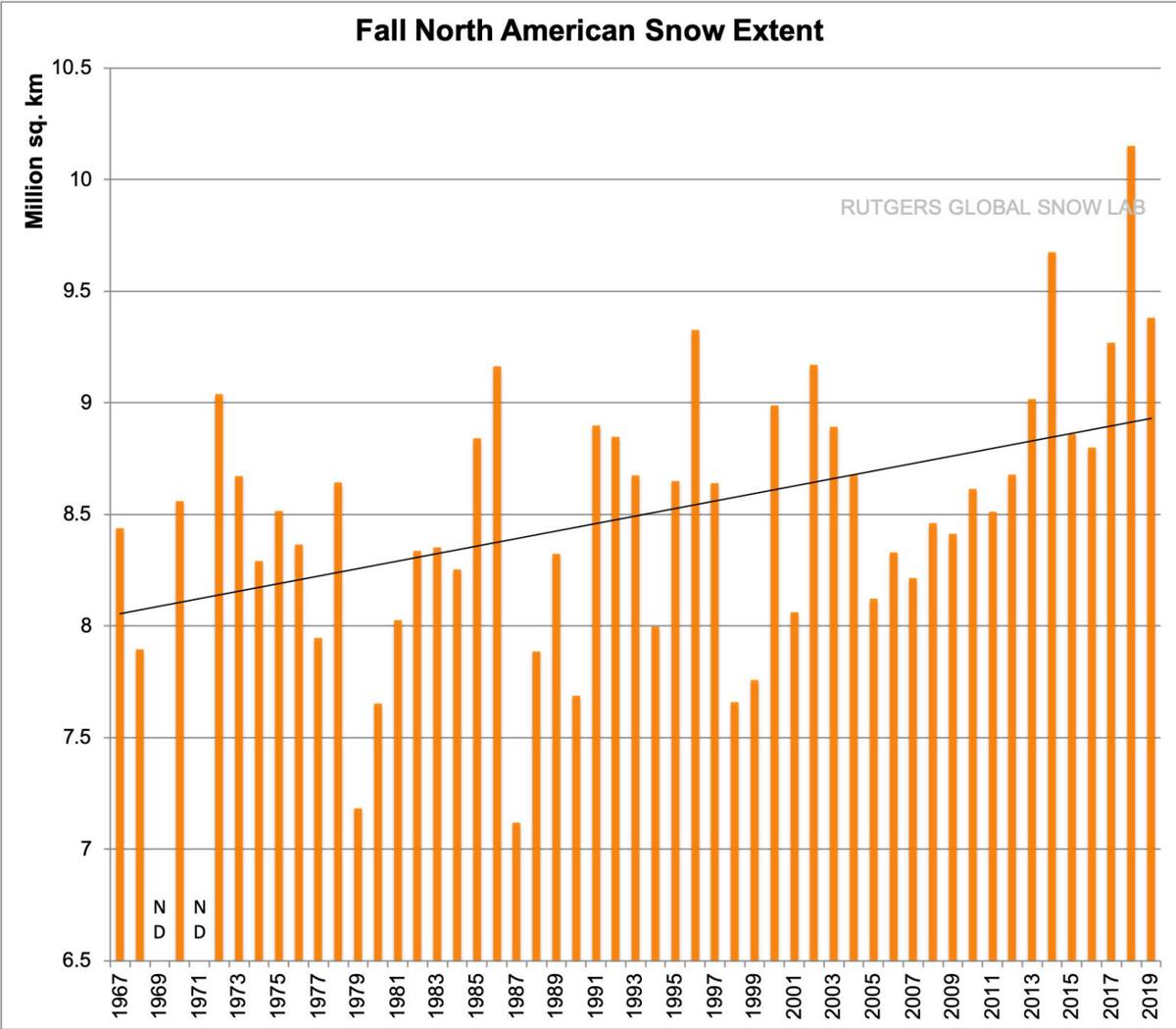 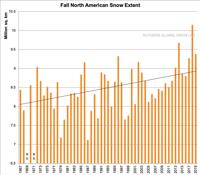 This graph from Rutgers University’s Global Snow Lab shows an upward trend in snow extent over North America in the fall season, in millions of square kilometers.

Over the course of nearly 30 years forecasting the weather in Jackson Hole, I’ve made a few observations. Not just about the weather, but about people’s attitudes toward the weather, especially when it comes to winter weather and snow.

Late October and early November of this year provided the perfect example of what I mean: There was one faction of Jackson Hole that was already hiking for their skiing before Halloween, heralding the snow gods to “keep bringing it.”

Then there were those wishing that the brief return of warmer and drier weather in early November would last through Thanksgiving. Of course, those wishes got stomped out by a Veterans Day storm.

It seems to me, from my observations, that recently winter has been coming on earlier in the fall. It has been more than 10 years since I can remember an exceptionally late start to winter, like back in the fall of 2008.

That year, warm and dry conditions lasted into early December, with highs in the mid-40s in town. I was able to ride my mountain bike to the top of the Ferrin’s trail at the end of the first week of December, nearly all the way to the saddle on the ridgetop, snow-free on dry dirt.

Oh, you should have heard the whining that December, about how we wouldn’t have a ski season. Then magically, by Christmas Day 2008, we had 20 inches of snow on the ground in town.

Then there are years when there is plenty of snow for making turns at Targhee or on Teton Pass by Halloween, as in 2010, 2013 and 2019, if I recall correctly. And as mentioned, this year some folks were making turns before to Halloween.

With an unprecedented early snowfall on Labor Day this year, the earliest we have ever had an inch of snow in town, and record low temperatures in each the last two Octobers, getting below zero in October 2019 and 2020, I have to wonder: Is it just Jackson Hole that seems to be getting an earlier winter?

To find an answer I went to the Rutgers University Global Snow Lab to see what it had to say about this trend of earlier winters. On its website are some easy-to-read graphs of the seasonal snow extent across the entire Northern Hemisphere.

These graphs date from the late 1960s, shortly after the first weather satellites were put into space, up through 2019. They measure the extent of the snow cover, in millions of square kilometers, during fall, winter and spring.

Lo and behold, for the fall season my theory was confirmed. Over North America snow extent hit a low point in the late 1990s, and since then there has been an upward trend that is noticeably steep and consistent over the past 10 years or so. Some of the biggest years ever recorded for snow extent over North America in the fall season have been within the last seven years.

You don’t have to work for NASA to be able to conclude that if there is more snow on the ground in the fall season, there must also be lower temperatures.

The winter snow cover extent graph also show a slight overall upward trend for the past 50 years, not just over North America but over the entire Northern Hemisphere. There are plenty of ups and downs: big winters followed by low snow-extent winters followed by big snow-extent winters. Generally, though, winter snow extent has been relatively consistent compared with fall and spring.

The spring snow extent over North America, on the contrary, shows an overall decrease across North America and the Northern Hemisphere over the past 50 years. There are plenty of ups and downs from year to year, most radically in the last 10 years. A couple of the lowest years on record in North America occurred in the spring of 2010 and 2016.

So for those who lament an early winter, take solace knowing that the snow seems to be leaving earlier in the spring.

I’ve also observed that attitudes toward the weather in the spring are more unanimous than they are in the fall. By April 1 nearly everyone is sick of winter and wishing that it would stop snowing. We yearn for sunshine and higher temperatures, and if we’re not getting it here we leave.

No matter what the season, you can’t change the weather. All you can do is change your attitude or change your latitude, to paraphrase a Jimmy Buffet song.

Jim is chief meteorologist at Mountainweather.com. He has forecast weather in Jackson Hole for 29 years.