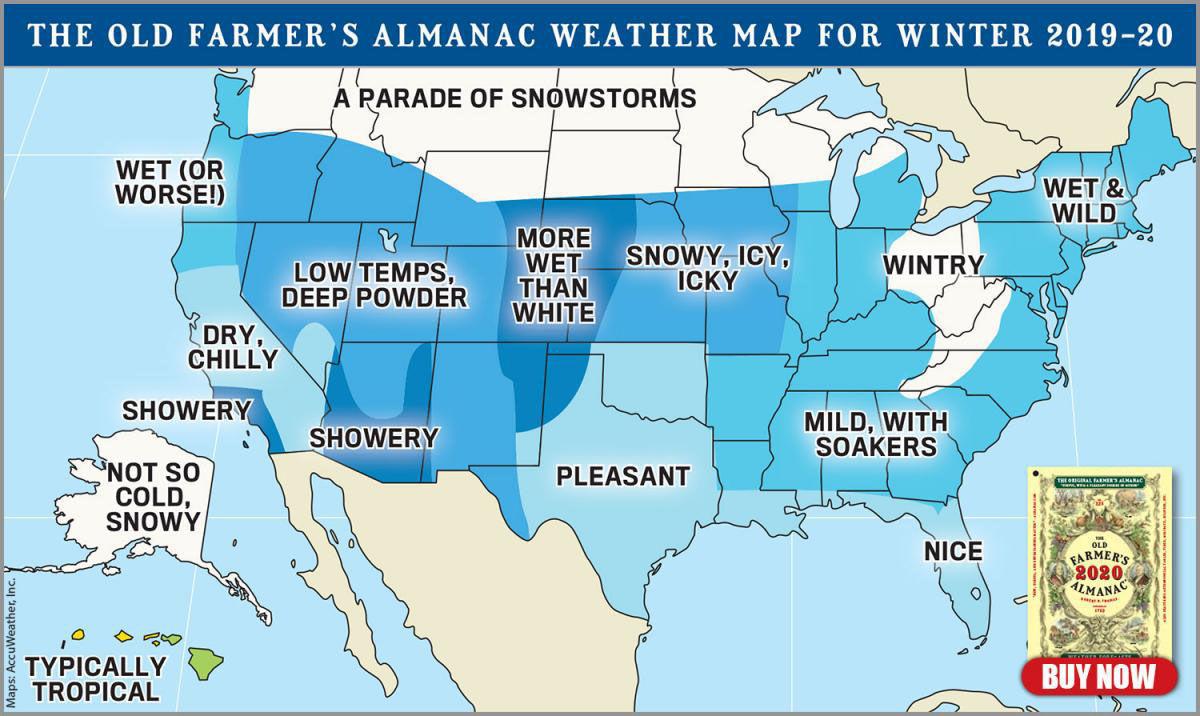 Early predictions for the 2019-20 winter suggest lots of snow, or as the Old Farmer’s Almanac puts it, “a parade of snowstorms.”

I can’t seem to go anywhere this time of year without being asked, “What kind of winter are we going to have?”

It starts in late August, when I am in the grocery store or hiking on the trail or from people passing in the opposite direction while I ride my mountain bike.

I realize it wouldn’t look good if I simply replied, “I don’t know.” But to be honest, I really don’t know. Mainly because I haven’t been thinking about snow, especially when it was still 80 degrees and sunny.

But with all that asking, I decided I better sit down and comb through the long-range outlooks.

What the farmers say

There are two main weather almanacs available, both with a long history of weather prognostications: the Farmers’ Almanac and the Old Farmer’s Almanac.

The Farmers’ Almanac has labeled all of Montana, Wyoming and Colorado “frigid and snowy” for the coming winter. That sounds good for us. Utah falls under the heading of “cool, and normal precipitation.”

Last winter the Farmers’ Almanac’s forecast for Wyoming was “teeth-chattering cold and snowy.” Fact is, it actually was much colder than normal in Jackson last winter, along with above average snowfall, mainly due to the record snowfall we had in February 2019.

The Old Farmer’s Almanac predicts exactly what you’d want to hear if you are a winter sports enthusiast: “Low Temps, Deep Powder.” That forecast is valid for southern and central Idaho, most of western Wyoming and Colorado, as well as all of Nevada and Utah.

The Old Farmer’s also has northern Wyoming and all of Montana under a forecast that says simply, “A Parade of Snowstorms.” Seems like a can’t-miss situation for Jackson Hole.

How did the Old Farmer’s Almanac do with last winter’s prediction for our area? Its forecast for winter 2018-19 was “mild and snowy.” OK, so it missed on the temperatures, but nailed it with “snowy.”

I could pretty much cut and paste the forecast from last winter from the Climate Prediction Center, or CPC, a division of NOAA, and plug it in here for this coming winter.

The CPC’s latest prediction for December 2019 through February 2020, issued Aug. 15, calls for a 55% chance of warmer than normal temperatures over western Wyoming — bucking the cold trend the two almanacs are predicting.

The CPC also has western Wyoming under what it calls “equal chances” for above normal or below normal precipitation for winter 2019-20. Not nearly as encouraging as the two almanac forecasts.

If you are keeping score, the CPC was wrong about temperatures last winter — it was not warmer than normal, it was much colder than normal. Its prediction on precipitation was also noncommittal last year, “equal chances.”

Come on CPC — stick your neck out and go one way or the other! Call it “above” or “below” normal precipitation and you still end up with a 50% chance of being right.

Forget El, La and No Nino

One of the final indicators of winter weather is the ENSO forecast — that’s El Nino Southern Oscillation. Last winter we were in a weak El Nino and were not supposed to be cold or snowy. Based on that predictor, we should have seen warm and dry conditions in the northern Rockies. It was quite the opposite.

This winter the consensus among NOAA’s ENSO forecasters is that the current “neutral” conditions in the Equatorial Pacific, which began in July, will continue through the Northern Hemisphere winter 2019-20.

What does that mean for us? Absolutely nothing. Why do I say that? Because we’ve had above normal snowfall in the mountains for the last five out of six winters, while under El Nino, La Nina and No Nino (neutral) conditions. At this point I have to discount the ENSO as an indicator.

There you have it. That’s everything I know about how this winter might shape up. The next time someone asks, “What’s kind of winter are we going to have?” I plan to answer: “Haven’t you read my column in the Jackson Hole News&Guide?”