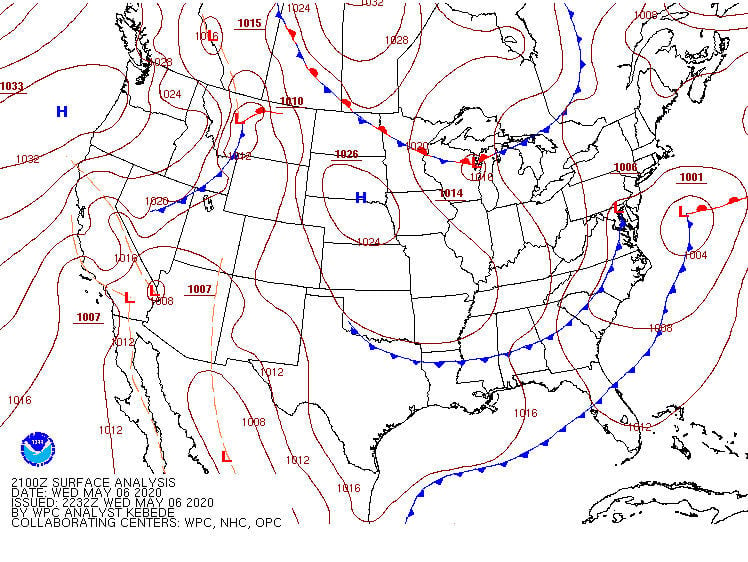 This surface map shows pressure contour lines, fronts and high- and low-pressure centers (marked with H or L) from around noontime on May 6. Note the tight pressure gradient across Idaho and a cold front. It was windy that afternoon in Jackson, averaging between 20 and 30 mph between 2 and 6 p.m. Wind gusts reached 37 mph.

In the song “Subterranean Homesick Blues” Bob Dylan sings, “You don’t need to be a weatherman to know which way the wind blows.”

I agree with Bob on that one. That is, as long as you have some sense of direction or a compass. You should also know that wind is expressed in the direction from which it is coming. For example, a north wind comes from the north.

When you might need a weatherman, is knowing why the wind is blowing.

Spring and fall seem to generate the most questions for me about the wind. There is good reason for that, so allow me to explain how wind works.

To fully explain all the machinations of wind would require a much lengthier discussion involving a lot of physics and math, diagrams with circles and arrows, etc. I’ll spare you that and instead try to describe what makes the wind blow in the simplest terms.

First, to get air moving all you need is a difference in temperature from one area to another. For instance, cold air to the north of us, over the Arctic regions of the Northern Hemisphere, and warm air to the south of us, near the equator. That temperature difference could also be on a much smaller geographic scale.

We have experienced that this year on a few occasions, when very cold low-pressure systems move by, from west to east, just to the north of us. That builds up large temperature and pressure differences over us, and the winds become strong.

When temperature and pressure differences across a region are very small, winds are generally calm.

As the world turns

The wind moves in different directions around the globe due to the Coriolis Effect, which is generated by the rotation of the Earth. Air always starts to move from areas of higher pressure toward areas of lower pressure but is then turned to the right in the Northern Hemisphere.

One other factor that can affect both wind speed and direction is the terrain. The mountains disrupt the wind flow, add more friction, blocking it and slowing it down in some places. In other places, terrain can accelerate the wind, like over ridgelines, through gaps or down canyons.

The wide-open plains can generate more wind because there is less friction and little disruption of the air flow at the surface. Ask anyone who lives in Casper or Rawlins about the wind. They’d call us wimps here in Jackson Hole if they heard us say, “It’s really windy today!”

The same sort of effect can be felt over in the Snake River Plain in Idaho. Isn’t it always windier in Idaho Falls than in Jackson?

“Very windy” is when sustained winds are 30 to 40 mph. Over 40 mph is called “strong winds” and warrants a high wind warning from the National Weather Service.

Casper has a higher frequency of windy days, like genuinely windy conditions all day long. Jackson Hole gets breezy but rarely qualifies for the windy category.

Around the equinoxes, spring and fall, the latitudes we live at are going through the biggest temperature transitions of the year, which is when we usually experience more wind.

The reverse will be true in the fall. As colder air migrates farther south and larger temperature differences occur again, the frequency of windy — or should I say breezy — days will return.

I hope this brief explanation helps. Please feel free to forward this to Bob Dylan.

Jim Woodmencey is the chief meteorologist at MountainWeather.com and has forecast weather in Jackson Hole for 28 years. Contact him via columnists@jhnewsandguide.com.