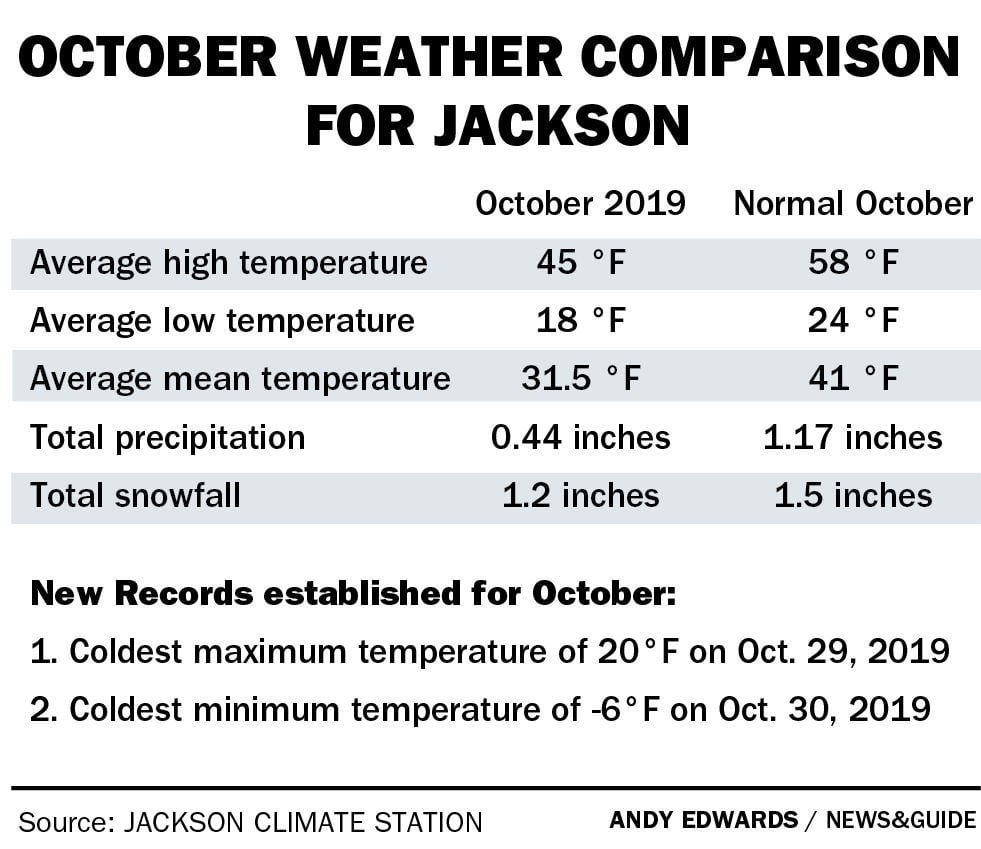 If you thought this October felt more like January, you weren’t too far off. There were some days at the end of the month when we experienced daytime highs and overnight low temperatures that were actually colder than the average daily high temperatures we see here in early January.

To top it off we established a new low temperature record for the month of October in Jackson, when it dropped to 6 below zero on Oct. 30. That surpassed a record that has stood for over 100 years.

This unusually early blast of arctic cold wasn’t isolated to Jackson. There were many low temperature records broken across the Intermountain West and Rockies this October, too numerous to mention in this column.

I will however hit all the highlights from the data recorded at the Jackson Climate Station during this historic, unprecedented, extraordinarily frigid October 2019, which will go down in the books as our coldest October ever.

October usually begins the decline into fall-like temperatures here in Jackson. Occasionally in October we might see high temperatures rise into the 70s. We usually get a number of days with high temperatures in the 60s, especially during the first half of October.

This October we had no 70-degree days and only two days managed to get warmer than 60 degrees.

According to the long-term records from the Jackson Climate Station, the average high temperature in town for the month is 58 degrees. The average high in October 2019 was only 45 degrees.

A monthly average high temperature that is 13 degrees colder than the long-term average is absolutely mind-blowing.

But this was a bone-chilling month

There were five days in October 2019 that established new daily records for the lowest maximum temperature on those dates. On three of those five days we had high temperatures that were colder than have ever been recorded here in Jackson in October.

The afternoon high on Oct. 28 hit 22 degrees while on Oct. 29 the high registered just 20 degrees, followed by a high of 24 degrees on Oct. 30. Any three of those would have established the all-time record coldest high temperature for October in Jackson.

That high temperature of 20 on Oct. 29, 2019 is now the coldest daytime high temperature ever recorded in town during the month of October. That also blows away the old record cold high temp of 25 degrees recorded on Oct. 30, 1991.

How low did it go?

On the morning of Oct. 30 it got down to 6 degrees below zero in town.

According to the records summary for Jackson from NOAA, the coldest temperature in October was 2 degrees above zero. That happened Oct. 31, 1972.

That NOAA summary does not account for some of the older records from the early 1900s, so I decided to dig a bit deeper into the archives. What I found was a weather observation sheet from 1917, which had recorded a low temperature of minus 5 degrees on Oct. 29 of that year.

That is the only other below zero October day I could find in Jackson for as long as records have been kept.

Granted, there are many missing days, months and years when you start looking back before the 1950s, which means a record low or high could have been missed.

All I can say is, from all the temperatures that have ever been officially recorded in town, this October’s minus 6 degrees beats them all.

The average low temperature for October 2019 was 18 degrees. That is six degrees colder than the long-term average low in Jackson in October of 24 degrees.

Just plain, all around cold

Taking the average high and average low for the month, then averaging those two numbers, yields a monthly mean temperature of 31.5 degrees. That is just about 10 degrees colder than the long-term average mean temperature in Jackson in October, which is a much more comfortable 41 degrees.

That was the icing on the cake, and I cannot find a colder October in our weather history than this one, in terms of high, low or mean temperatures.

As it turns out, your instincts were correct. It not only felt like this October was colder than normal, it was record-breaking colder.

Yep. This global warming thing is gonna freeze us all out. Maybe we should all ask the 16 year old expert to come give a speech on green house gases, as she jet sets around the country telling me to cut my carbon footprint. Between her jet emmisions and Al Gore's, I don't think I'm gonna change 1 thing about how I live.