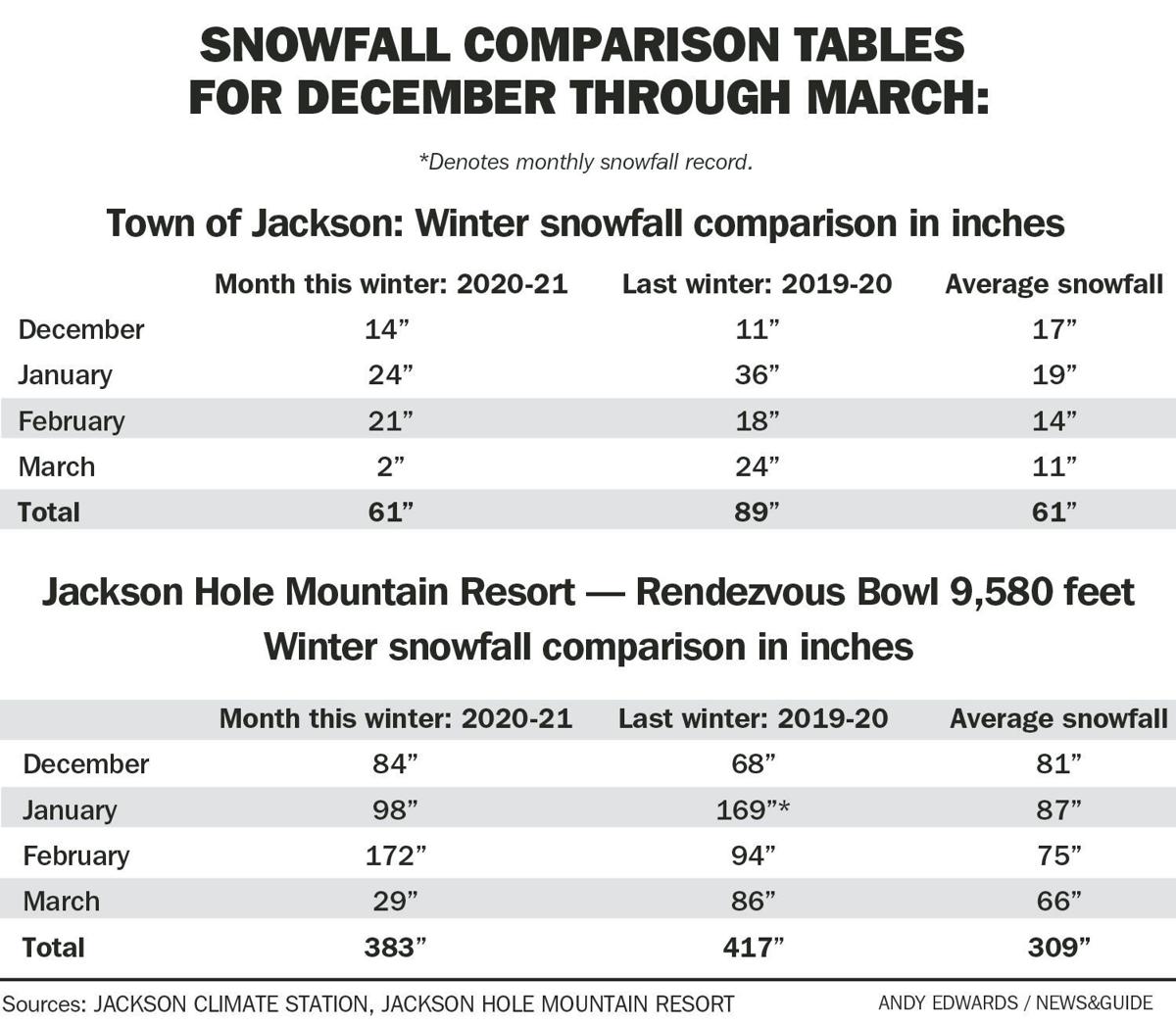 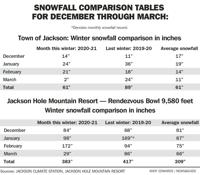 This winter certainly had its ups and downs with snowfall, precipitation and temperatures alike. Trying to characterize the winter of 2020-21 in a just a few words would be futile. Therefore, in this week’s column I’ll review all the data for you so you can see exactly what transpired and how it all compares with years past.

When I totaled up the monthly snowfall numbers from the town of Jackson Climate Station between Dec. 1, 2020, and March 31, 2021, I was amazed to find that we had received 61 inches of snow, which is exactly what the long-term average winter snowfall is in town for that four-month period.

However, if you were to include the snow we received in town last October and November — which, by the way, were both snowier and colder than normal months — you could add another 20 inches to the snowfall total.

That brings our six-month snow total for the period of October 2020 through March 2021 up to 81 inches. That’s nearly 10 inches more than the average snowfall total in town for October through March, which is 71.5 inches.

Even though the snowfall was right at normal the past four months and above normal for the past six months, the amount of water in all that snow came up short of the long-term averages.

This water deficit, as compared to snow, was likely due to the fact that temperatures were lower than normal the past six months.

Jackson had a grand total of 46 days between Dec. 1 and March 31 with low temperatures at or below zero. The coldest day of the winter was Dec. 29, with a low of minus 21 degrees.

Our warmest day of the winter was the day before the spring equinox, on March 19, when it reached 54 degrees at the climate station.

Snowfall in the Teton mountains racked up above-normal numbers again this winter. From Dec. 1 to March 31 the Rendezvous Bowl weather station, at 9,580 feet in elevation at Jackson Hole Mountain Resort, recorded 383 inches of snowfall. That is 74 inches more than the long-term average snowfall of 309 inches for that four-month period.

December, January and February each had above-average snowfall numbers in the mountains, with February notching the biggest total of them all, with 172 inches for that month alone. February 2021 became the second-snowiest February on record and third-snowiest month ever recorded at Jackson Hole Mountain Resort, behind February 2019 with 196 inches and December 1996 with 225 inches.

This winter’s grand total of snowfall at Rendezvous Bowl from Oct. 1 to April 1 was 493 inches. That’s almost 100 inches more snow than the long-term average seasonal snowfall up there of 394 inches.

This year’s snowfall was also enough to qualify as the seventh-snowiest winter on record at Jackson Hole Mountain Resort.

According to the SNOTEL data compiled by the Natural Resources Conservation Service, which includes snow and water amounts from October through the end of March, the Snake River drainage was at 93% of normal for snow water equivalent.

When you consider there wasn’t much precipitation around here for the whole month of March, the water we were able to store in our snowpack from the previous six months’ bounty, was enough to keep us fairly close to normal at winter’s end.

If I had to summarize this past winter season for Jackson Hole, I would put it this way: temperatures were lower than normal, water was less than normal, but for most of the winter we had abundant powder in the mountains, without too much snow to shovel from our driveways.

Jim Woodmency, chief meteorologist at MountainWeather.com, has been forecasting the weather in Jackson Hole and the Teton Range for 30 years. Email him via columnists@jhnewsandguide.com.