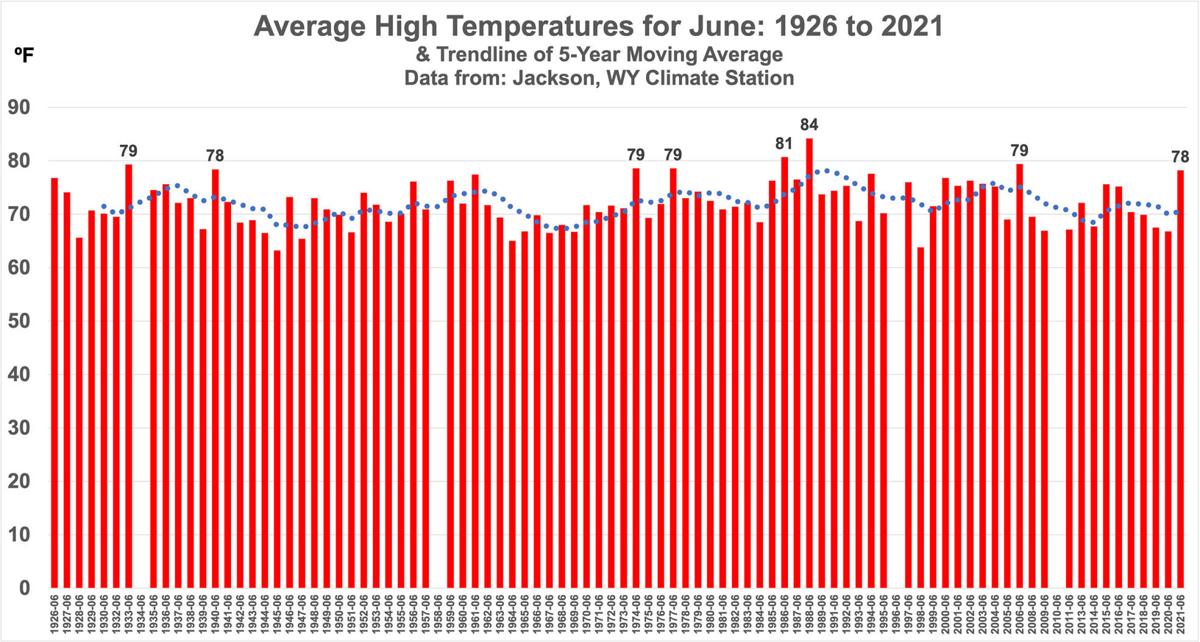 This graph shows the average monthly high temperatures in June over the past 95 years in Jackson.

I heard a lot of complaining this past month about how hot and dry it was in June. In relative terms this June was much warmer and much drier than normal, but it was nowhere near record breaking. You would have to go back a few years to see what a really hot and dry June is like.

In this week’s column I’ll give you all the stats that compare June 2021 to the historic averages and records from the Town of Jackson Climate Station.

No high temperature records were broken here in Jackson during June 2021. There were 15 days recorded at the climate station that were at or above 80 degrees. The warmest day was June 15, when the thermometer registered a high of 88 degrees. It did not reach 90 on any day, officially. (Unlike our car thermometers, which are not official readings.)

In comparison to 1988, during the hottest June ever, there were 26 days that reached 80 degrees or warmer; four of those days were 90 degrees or warmer. Including the highest June temperature ever recorded here of 95, set on June 26, 1988.

Overnight low temperatures were closer to normal in June 2021, at 38 degrees, compared to the long-term average of 37 degrees.

June 1988 had a similar average low temperature to this past June, and is still ranked as the warmest June overall, with a mean temperature for the month of 61 degrees.

June is normally the second wettest month of the year behind May, averaging 1.63 inches of precipitation. June 2021 had a paltry 0.33 inches. We can say that this past June was drier than June of 1988, which had 0.35 inches, a two-hundredths of an inch difference.

Remember, during that timeframe in the 1930s the Plains and Rockies were experiencing the ultimate mega-drought, aka the Dust Bowl.

A look at July and August

July is the driest month of the year in Jackson, averaging just 0.94 inches of precipitation. Over this past Fourth of July Weekend, Jackson got a good dowsing of rain from thunderstorms, an amount that equaled all of June’s precipitation, 0.33 inches.

In July 1988 there was absolutely no precipitation recorded in Jackson. Zero, zilch, not a drop. So we have that going for us, as we are already having a much wetter July than we did in 1988.

The total precipitation in town for June, July, and August in 1988 was only 0.80 inches. Combined with the unusually high temperatures, 1988 is still ranked as the hottest and driest summer on record.

The summer of 1933 was a close second for driest with a total of 0.91 inches of precipitation. And, for trivia’s sake, July of 1934 still holds the all-time record highest temperature ever recorded in Jackson, 101 degrees, on both July 17 and July 20, 1934.

While the outlook for the rest of July and August in Jackson Hole is still calling for warmer and drier than normal conditions, it seems unlikely that this summer will end up as hot and dry as it was in 1988 or as hot and dry as the Dust Bowl years.