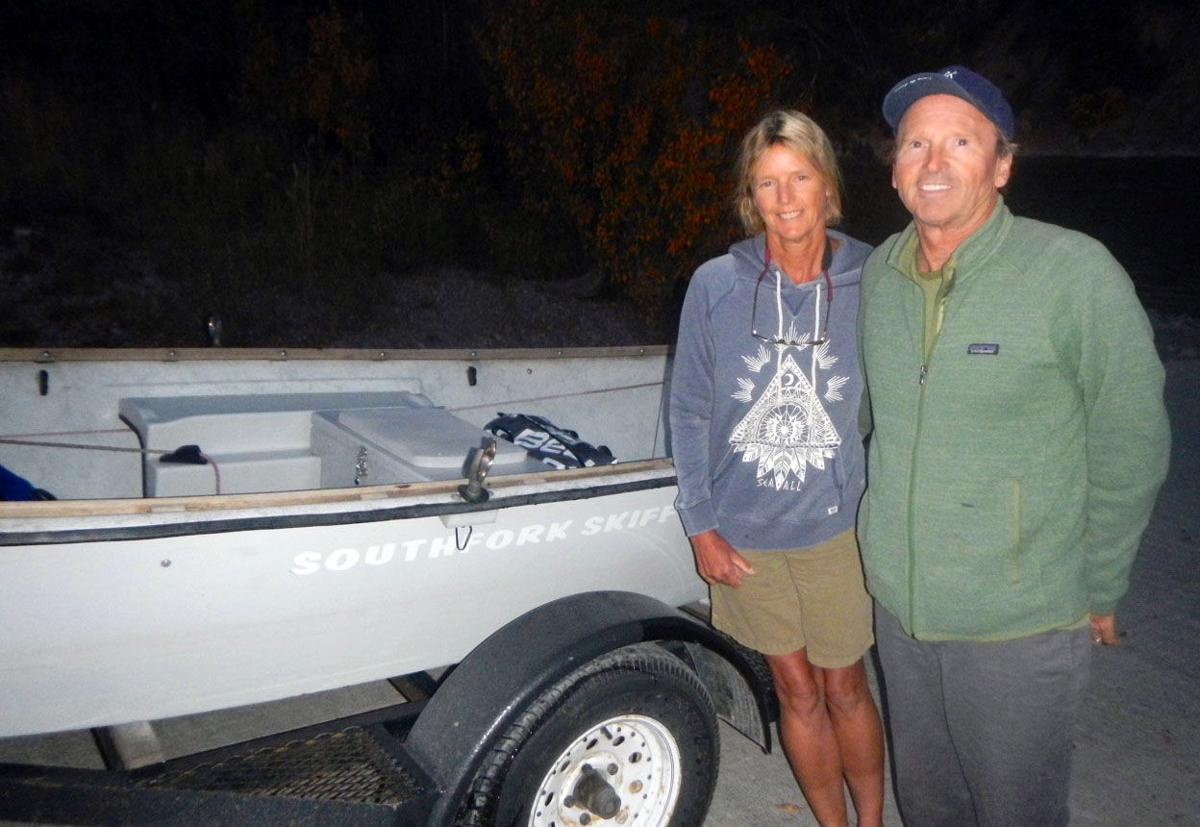 Ralph Headrick, seen here with wife Mary, and Paul Bruun are the guys who created the 14 1/2-foot South Fork Skiff driftboat in the mid-1980s. Visiting from Santa Cruz, California, last week, the Headricks again floated in the final South Fork Skiff produced in 1994 before RaPaul Manufacturing was sold.

“Bruun, do you realize this boat is old enough to legally drink and vote?” Ralph Headrick asked as we skirted the turbulence from Volkswagen-size (oops) boulders surrounding the East Table Creek Campground.

While we reminisced about Snake River drift boat history, cutthroat gladly chomped the Opal Grey Trude being punched by his wife, Mary, via her 6-weight Sage, into a persistent late afternoon breeze.

It wasn’t coincidence that we were floating aboard the final South Fork Skiff produced by RaPaul Manufacturing in 1994. Ralph moved to California in 1995.

Ralph Headrick is a superb artisan in every medium he explores, from twisting wrenches on autos, outboards, small engines to oil painting on canvas, fly tying, carpentry and fiberglass. Especially fiberglass.

Zigzagging through piers and gnarly surf breaks while growing up in Southern California and then being one of the early Kahuna and Lunch Counter surfers after as a young man in Jackson helps explain the depth of Ralph’s fiberglass culture. We met in the early 1980s as Ralph was becoming an enthusiastic fly fisherman and I was discovering exactly where I could cram, scrape and float everything from small to large drift boats, rafts and aluminum johnboats on fishing trips.

We recognized that negotiating low-level railroad flat cars that served as bridges on ranches with smaller rivers, onerous upstream winds and rower vision obstacles handicapped the increasing number of floaters migrating into aluminum and fiberglass riverboats with high bows and sides.

The No. 1 tragedy suffered by new riverboat owners was that their wives or girlfriends — or friends in general — couldn’t comfortably (or joyfully) wield their shiny new wind-catchers. That sentenced the owner to rowing permanently, and he never got to fish. This became a real family problem. Another persistent nightmare was helplessly seeing less-agile fishing clients tumble overboard as they tried — unassisted — to enter and exit these high-sided craft.

As underfunded developers of a modest float fishing product that lacked the macho-meter scores of a manly McKenzie-style driftboat hauled behind a muscular pickup truck, the easy handling South Fork Skiff sputtered in a land where aerobic rowing effort was heralded as a right of passage.

Larger 16-foot driftboats demanded more rower energy to slow down, spin and hold in position but could be slammed through heavy water and haul more gear for overnight trips. A lighter, low-sided skiff required attentive back-rowing and course planning to navigate taller waves, heavy confluences and whirlpools. Positive results were that Skiff owners’ shoulders, backs and wrists suffered fewer injuries and their fishing passengers weren’t worn out from standing and trying to cast all day.

A flatter nose and milder tapered stern design supported greater Skiff floating surface than the pointier McKenzies, creating a much shallower draft that excelled in skinnier streams than the taller boats.

We discovered how much truth was contained in an admission by Scott Deal, the successful developer and owner of Hughes, Maverick and Cobia boats in Fort Pierce, Florida: “Until I started producing and selling sport fishing boats I never realized how many supposed naval architects there were in the world.”

We, too, encountered abundant drift boat pundits but succeeded in developing a quantity of pleased Skiff owners. Delivery outside the Mountain West was hard, but we managed to put South Fork Skiffs on waters in Michigan, Tennessee, Georgia and throughout the western states. I am still amazed when I reread the correspondence we received from folks around the country requesting information and prices.

Innovation, marketing and producing boats were aspects of the RaPaul relationship that went pretty smoothly. Maintaining a friendship within a business framework is always a challenge. Thankfully, we also succeeded in that department, as Ralph survived a divorce and at one point became my roommate as well as a business partner. I was glad to be there for him during those difficult times. He more than repaid me with generous support when I suffered a depression breakdown during the late 1980s while dealing with my mother’s Alzheimer’s situation.

It’s hard to convince fishing guides and serious anglers to convert to another style of fishing boat. Standup casting from a driftboat was a popular trait that guides and clients extolled. A majority of fly and spinning rod users cast better when standing.

But the lower Skiff profile with a seated bow angler floats closer to prey without spooking it. Learning to cast accurately at closer distances while seated requires dedicated practice. Studious casters receive fishing dividends when operating from a Skiff.

Ralph and I sold a couple shy of 100 drift boats during our South Fork Skiff manufacturing career, which extended into 1994. The low-profile drift boat design and concept were ahead of their time, as were the Sawyer custom SFS broadly tapered oar blades for better shallow-water bite. Eventually low-profile McKenzie-style drift boats as well as Skiffs by other builders began to gain popularity. South Fork Skiff was sold in 1995 to Carter Andrews, the first of several later owners.

After surviving Jackson since the early 1970s, Ralph began to dread the winters. He reasoned that a return to California where he could surf and have more outdoor time would remedy such doldrums.

Realizing that there would be no more RaPaul-built boats emerging from our mold allowed my final model to receive extra-density fiberglass and an ultra-thick transom. Although not designed for extensive outboard power, this skiff and two-stroke, 4-horsepower Evinrude have achieved lengthy river and lake journeys and endured some horrifying weather conditions.

Except for an autumn breeze, on a recent outing with its builder and his determined angler-wife aboard our 21-year-old South Fork Skiff handled splendidly. It was a special day heightened by fall-colored aspen, ash, cottonwood and maple on hillsides and banks along the lower river that equaled the richly hued yellow cutthroat we encountered.

Whether it’s cleaning, rowing or fishing, not an activity with my favorite drift boat occurs without reminding me of all the splendid memories that came from creating the South Fork Skiff with Ralph Headrick. This fishing outing was the latest example.

Paul Bruun writes weekly on his adventures and misadventures in the great outdoors. Contact him via columnists@jhnewsandguide.com.