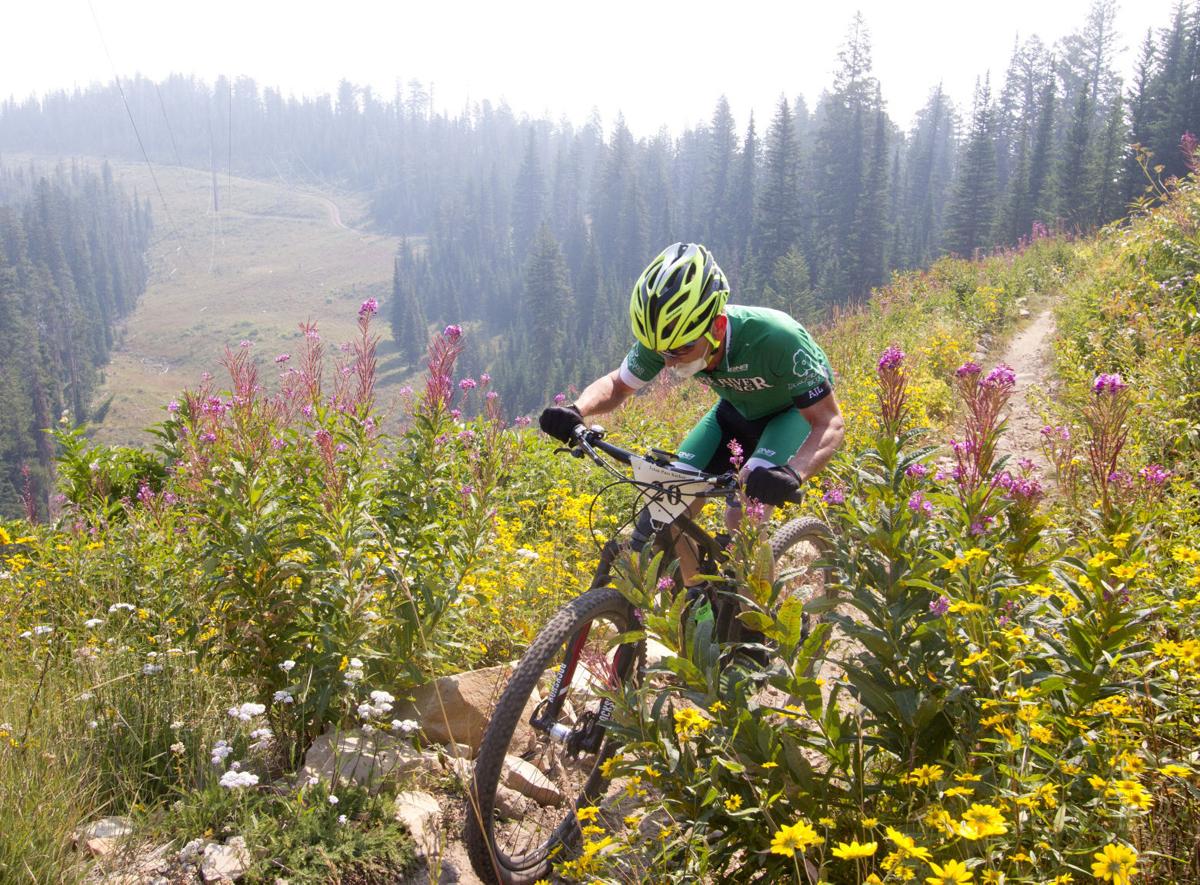 Gabe Klamer dons a surgical mask while smoke from wildfires burning in Idaho and Washington hangs in the distance during the Teton Pass Kicker mountain bike race in 2015.

Last week I had a mountain bike date with some friends of mine. We planned to meet at the trailhead around 8 a.m. in order to beat the heat, but when I got up around 7 a.m. it looked apocalyptic outside.

The sky was yellowish brown, and I couldn’t see the mountains 5 miles away from my house. My eyes were watery, and when I stepped outside to put my bike on my car I could smell the smoke. Obviously, the jet stream had shifted overnight, bringing in bad air from the hundreds of fires burning across the West right now. The question was: Should we still go biking?

We’ve all been told it’s a bad idea to exercise in wildfire smoke and air pollution, especially if you are sensitive. But what exactly does that mean? And for those of us who can’t imagine missing a workout, especially a workout outside, how bad can it be for us to bike or run when it’s smoky?

That question is getting a lot of attention these days as we face a future where smoke season has become a regular — and ever longer — part of the calendar year. And the answer, as you probably expect, is: It depends. It depends on everything from just how bad the air is, to what kind of exercise you want to do, as well as your age, health, fitness and sensitivity.

The most common metric for measuring pollution is the EPA’s air-quality index (AQI), which looks at the four major air pollutants regulated by the Clean Air Act: ozone, particle pollution, carbon dioxide and sulfur dioxide. Wildfire smoke tends to have a slightly different composition than human-caused pollution, but AQI is still the best metric we have for measuring the risks posed by air pollution regardless of its source.

According to atmospheric scientist Ranil Dhammapala, particulate pollution is the leading cause of concern when you are thinking about exercising. Fine particles, particularly those smaller than 25 micrometers in diameter called PM2.5, can get lodged in your lungs, breaking down cells and contributing to lung disease. They can also enter your bloodstream and potentially cause heart attacks and arrhythmia, not to mention being an irritant to your throat, eyes and nose.

But how bad is the air? And if the warnings are aimed at “sensitive people,” can those of us who don’t fit into that category get away with a scratchy throat and itchy eyes in order to get our exercise fix?

Sensitive people include children, people with asthma or other respiratory illness, people with heart disease, pregnant women and older adults. These individuals have a lower threshold of vulnerability and therefore should be extra conservative about exercising when it’s smoky. For those of us who don’t fit into these categories, studies indicate we can get away with exercising in less than ideal conditions up to a point. After that — when the air is really bad — we should stick to doing workouts inside with the windows closed.

A 2016 study in Preventative Medicine determined that in general, some exercise is better than no exercise. Researchers found that for individuals who not have any inherent sensitivity, exercise in unhealthy air conditions can still be beneficial up to a certain point, when suddenly the negative health effects outweighed any potential gain. According to the findings, it took 10 hours of walking or five hours of biking when PM2.5 was at 50 micrograms per cubic meter — which is well into the EPA’s unhealthy zone — before you started canceling out the cardiovascular benefits of exercise. But there’s a caveat. The harder you are breathing, the shorter your exposure should be. To further complicate things, most air quality information is measured according to the AQI, which includes pollutants besides PM2.5 and is, therefore, a different scale from the one used in the study, but the point is still relevant. It is important to consider air quality, at least during fire season, before you plan a big, hard day in the mountains.

The best way to determine if the air is too bad to exercise is to go to AirNow.gov. You can enter your ZIP code and a graphic will pop up that indicates the air quality in your neighborhood. As I write this, the AQI for Victor is 52, just touching into the moderate level where most of us are fine being outside exercising. (Remember, this number is not the PM2.5 number.) Unhealthy for the general population starts around 150 on the AQI scale, with 200 being the level when a general health alert is warranted. Last week, a crowdsourced air-quality monitor in Driggs, Idaho, which is included in the AirNow data, registered around 130. That’s pretty darn bad air for our neck of the woods — bad enough that the experts would advise even those of us with healthy lungs to stay indoors when we were breathing hard.

If you don’t have access to AirNow, you can use visual landmarks to gauge air quality. We all know good air. It’s when the Tetons are etched against the sky in full detail, and you can detect rocks, snow fields, spires and slabs from miles away. On those days, go big. You can breathe as hard and deep as you want without worrying about the health of your lungs.

When visibility gets down to about 6 miles — and I’m not talking just haze, I mean you cannot see the Tetons at all from 6 miles away — air quality is moderate. Three miles, it’s poor, and time for even those of us who have no particular sensitivities to stay indoors doing squats and burpees to get our exercise fix.

On that Sunday two weeks ago, I didn’t know a lot of this stuff, but my friends and I knew the air quality was bad. We could taste it. It blocked the Tetons from view. We knew it was smoky. We decided we still wanted to ride our bikes, but we modified our route. Instead of a long uphill ride that would have had us panting for hours, we opted for more a rolling cross-country option. I think we probably still ended up smoking the equivalent of a few cigarettes, but we weren’t sucking wind quite as much as we would have been if we’d stuck to our original plan, and I think that was a good thing.

Molly Absolon writes every other week. Contact her via columnists@ jhnewsandguide.com.