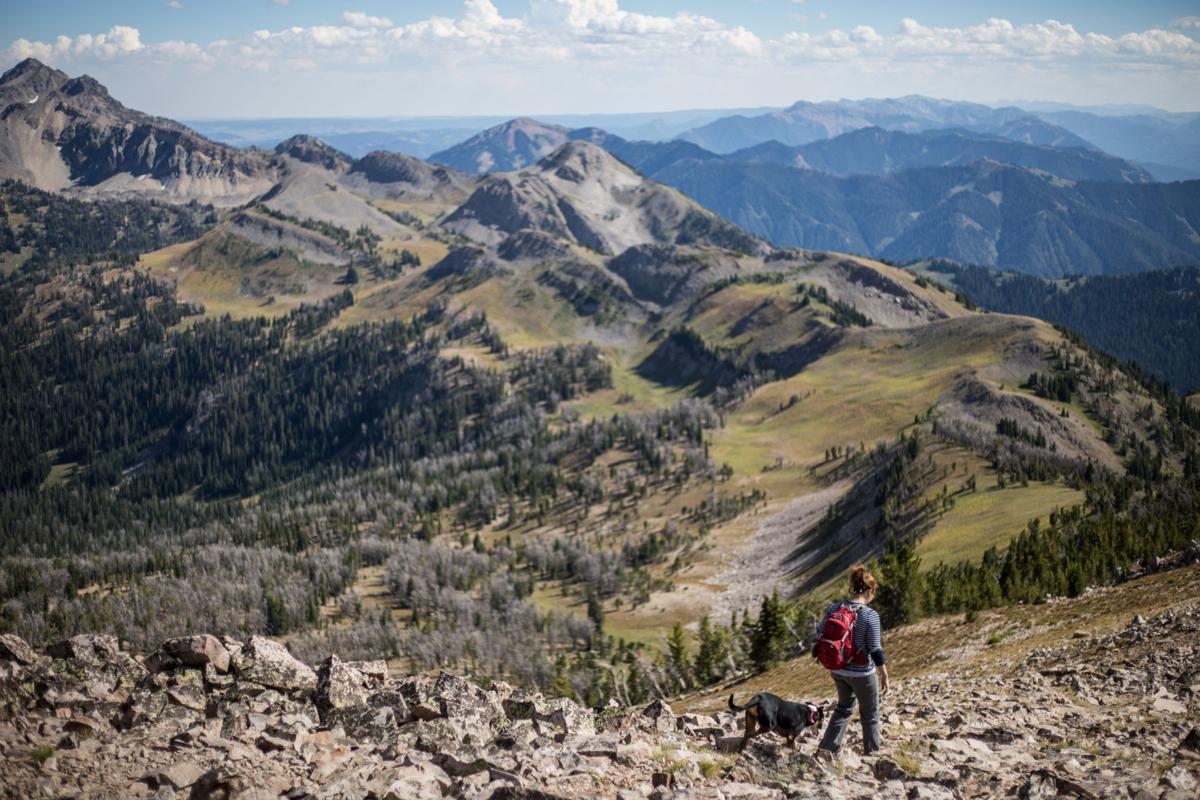 A hiker and her dog descend Jackson Peak in the Gros Ventre Wilderness in August.

I was happy to read in the Oct. 19 News&Guide that the Y2 Consultants study for the Wyoming Office of State Lands and Investments advised the state to not pursue a takeover of federal lands but, rather, to strive to influence federal management decisions through engagement in policy-making decisions.

The study goes on to point out the huge cost of managing public lands.

Those are costs for which Wyoming, with its projected $156 million budget shortfall, has no possibility of being able to cover without — and this is my greatest fear — the sell-off or privatization of our precious public lands.

I grew up east of the Mississippi River, where the federal government controls less than 4 percent of the total land mass. I thought I’d ended up in heaven when I moved to Wyoming in 1991 and found millions of acres of public land surrounded me — millions of acres of land where I could explore and recreate without having to ask permission. There are very few places in the world outside the United States where people have this incredible gift. It’s a gift that most of us recognize and value, but, for some reason, a loud and influential minority keeps calling for a transfer of these federally managed public lands into state hands.

We’ve all heard the claims: The federal government mismanages the land and lets it deteriorate. Land management decisions take years to implement and require miles and miles of red tape and bureaucracy to get through the system. Decisions from Washington, D.C., are out of touch with local needs and desires.

The feds waste money and tie up valuable resources. Blah, blah, blah. The implication is that the states will do it better. I don’t buy it.

Sure, the federal government is slow and unwieldy. Sure, the bureaucratic process required to make policy changes is frustratingly complicated and costly, but there’s a reason for those hurdles.

The current population of the United States is close to 320 million. That’s a lot of landowners with a lot of conflicting ideas about how public lands should be managed. We have a complex management system to ensure that the whims of the powerful don’t push through bad policy decisions for nefarious reasons, specifically political or financial gain for themselves.

This system, despite its issues, has succeeded in protecting millions of acres of public land and protects our air and water quality, our wildlife resources, our wild and scenic rivers and our wilderness areas. It’s not perfect but it’s a lot better than what is in place in many parts of the world, and I am grateful for it.

In 2014 the Colorado College State of the Rockies Project found that 74 percent of Western voters oppose selling off public lands, while only 19 percent support the idea, yet that 19 percent seems to have undue power. In 2015, 11 Western states introduced land seizure bills in their state legislatures. This year the state of Utah dedicated $4.5 million in taxpayer funds to pay for a lawsuit against the federal government in an attempt to seize control of federal lands within its borders. It seems like a lot of money and energy is going into a struggle most of us don’t support.

The arguments in favor of state control seem crazy to me. First off, there is no historical justification for the idea that states have any legal claim to federal public lands. Wyoming’s Constitution states, “The people inhabiting this state do agree and declare that they forever disclaim all right and title to the unappropriated public lands lying within the boundaries thereof.”

The language in Idaho’s Enabling Act is almost identical. I imagine most Western states have a similar phrase in their charters. We gave away the right to these lands. They were considered worthless. Now that we have begun to see their worth, we can’t just say, “Oh, only kidding, we actually want those lands.”

It’s like selling your house before a market boom. You don’t get it back to get a better deal.

And to say the states would do a better job managing these lands is absurd. The states don’t have the capacity. Wyoming employs 96 people in its Office of State Lands and Investments. The Bureau of Land Management and U.S. Forest Service have over 1,000 full-time employees in the state of Wyoming alone. And these land managers aren’t in Washington, D.C.

We do a great disservice to the dedicated men and women who work for public land management agencies when we dismiss them as bureaucrats who have no connection to the lands and communities they manage. Their jobs aren’t high paying, nor do they guarantee fame and fortune for those who pursue them. They are jobs that attract people who care about our landscape, wildlife and air and water quality and want to make a difference. Not all of them are great at their jobs, but that’s true of every industry. They provide an incredible service to all of us — a service that ensures we can hike, bike, bird watch, ski, hunt, paraglide, packraft, fish and climb without having to ask permission from a landowner.

That’s amazing if you ask me.

Wyoming is currently in a budget crisis. With 70 percent of its operating revenue derived from energy extraction, the decline in oil and coal revenue hurts. Gov. Matt Mead is asking to dip into the state’s rainy day fund to cover operating costs, and it’s unclear how Wyoming will continue to fund its K-12 school system. The University of Wyoming is slashing its budget. The pressure is on to find new sources of income. Tell me that with that kind of pressure, states will manage lands for anything other than generating income.

Currently there are two state-owned inholdings within the boundaries of Grand Teton National Park. One of these properties, located in Antelope Flats, has been valued at $46 million. The National Park Service has been working unsuccessfully for years to raise funds to buy the inholding from the state. The clock is ticking. The federal government has until Dec. 31 to secure the money or the state has threatened to sell the land to private developers.

The state isn’t the bad guy here. It has a constitutional obligation to earn income from state school lands, and, given its current budget woes, the money from the sale of the Antelope Flats school section would provide a welcome infusion of cash into the school system.

And that’s the point. If every time the state experiences financial shortfalls its only recourse is to sell land, what happens to public lands in the long run?

The disconnect that exists between people in our country right now disturbs me. My facts aren’t their facts. My beliefs aren’t their beliefs, and the gulf between us seems to be widening. I don’t know how we reach across that divide to find some common ground. But if 74 percent of us really want to keep our public lands in public hands, we need to speak up. We need to vote. We need to fight for the wildlands that are critical to our quality of life.

Molly Absolon publishes Mountainside every other week. Contact her via columnists@jhnewsandguide.com.

The bottom line and basic misunderstanding in this article is that Federal = Public.

It most certainly does not.

The vast majority should be heard on this subject. The minority fighting for it are either grossly misinformed or have only their personal ambitions in mind. The "smart" sportsman know better and understand the serious ramifications of a state takeover. Read this article. http://trib.com/news/state-and-regional/govt-and-politics/lawmakers-to-discuss-amending-constitution-for-public-land-transfer/article_5cd76cab-09fd-5952-bca2-5c8cda56d618.html

The Government shut down 3 years ago should have taught all of us that "in Federal hands" does NOT mean it is public.

More and more "Federal Property" is exactly the opposite of Public property.

Great article! Thanks for speaking out and informing the public! Let's all get out and vote for the environment before its to late!

Thank you Molly for putting into words what so many of us feel in our hearts.