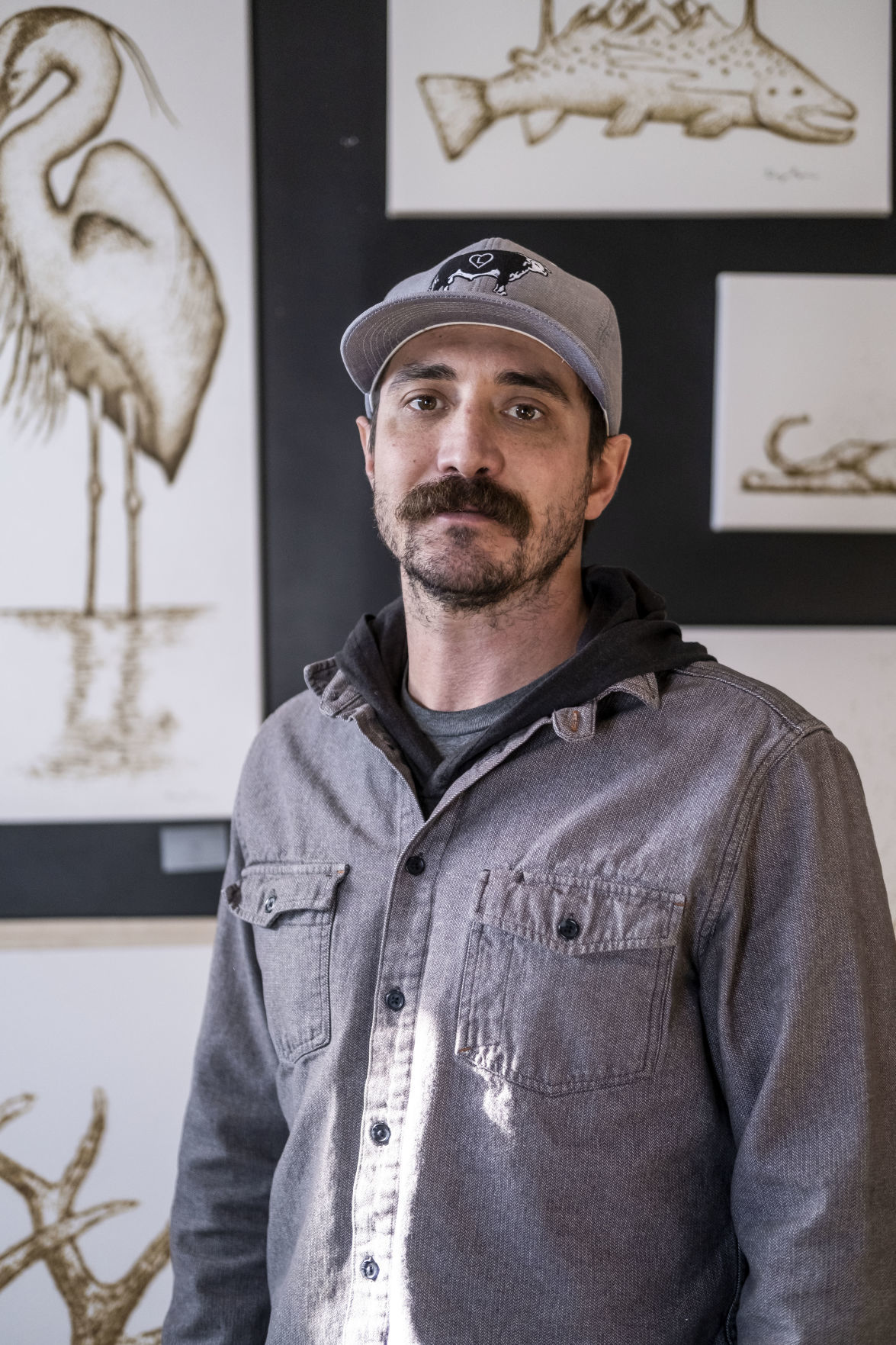 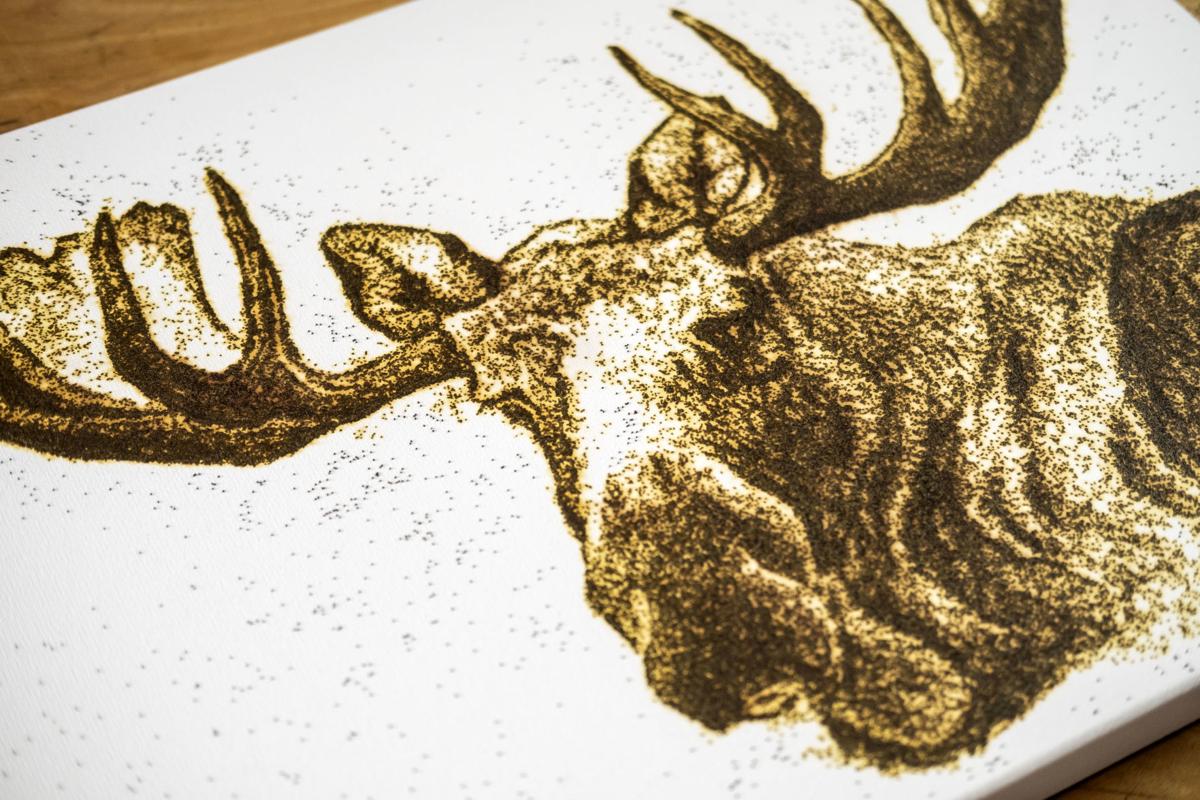 One of Danny Shervin’s newest pieces is this moose on canvas. He “paints” by lighting gunpowder so it burns the canvas. 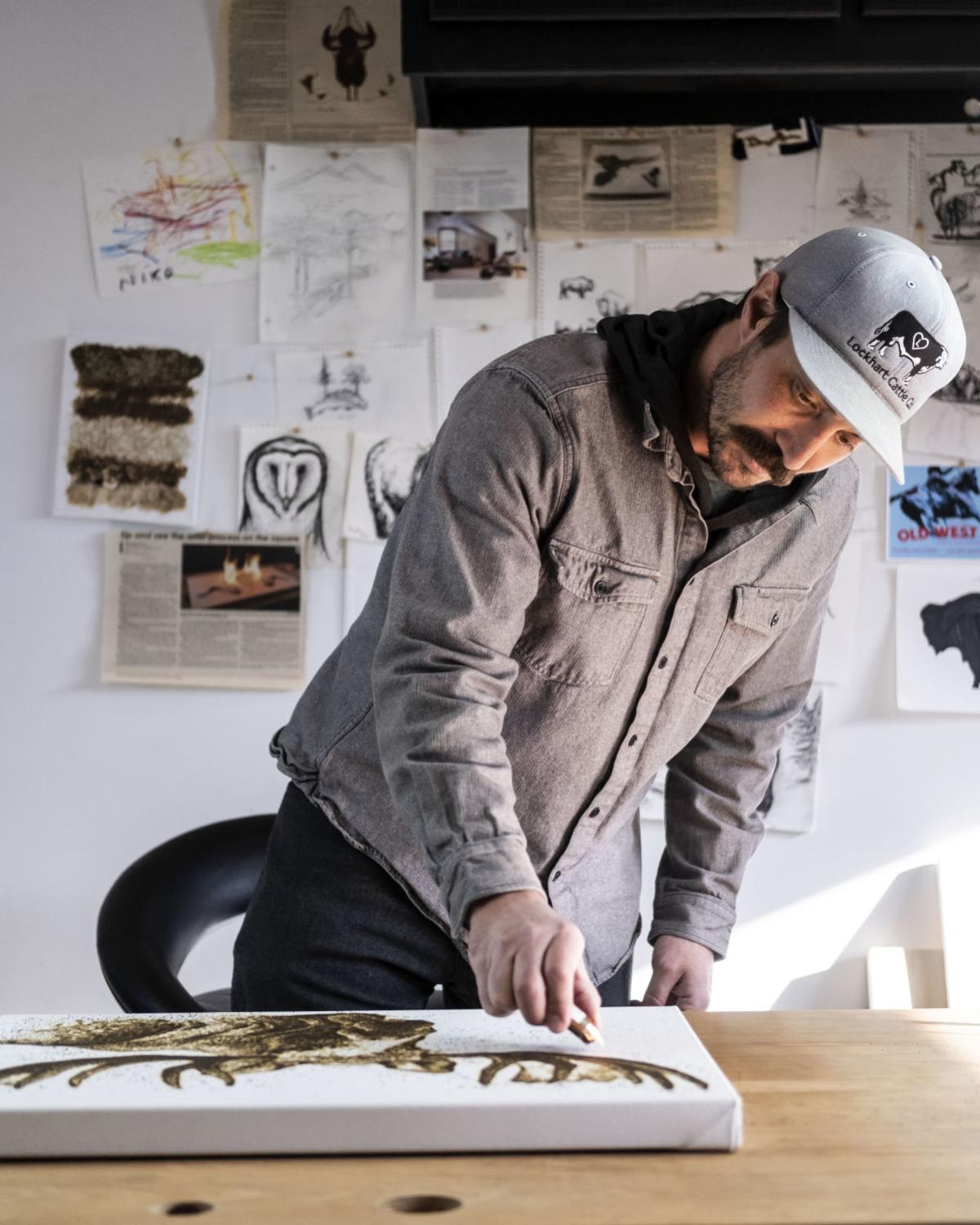 Valley artist Danny Shervin burns off the last bits of stray gunpowder Friday while completing a piece featuring a bull moose at his home studio in South Park.

One of Danny Shervin’s newest pieces is this moose on canvas. He “paints” by lighting gunpowder so it burns the canvas.

Valley artist Danny Shervin burns off the last bits of stray gunpowder Friday while completing a piece featuring a bull moose at his home studio in South Park.

A major career milestone for artists is the year they go full time. 2018 was that year for Danny Shervin. In 2019, he took off.

For about six years Shervin lived a double life. By day he worked in wealth management at First Interstate Bank. By night he was setting canvases ablaze.

“It got to the point when I had my full-time job and I’d go home and do my art until midnight or one o’clock and do artwork on the weekend,” Shervin said.

In September 2018 he made the leap to becoming a full-time artist. He quit his bank job and moved his artwork out of the garage to a real studio he built next to his home.

“I’ve always had plenty of work on the art side of things, so going to that full time was more just about the idea of setting my own schedule and being able to do something that I truly enjoyed all the time instead of late at night,” Shervin said.

Shervin’s artwork is quite literally explosive. Over the past decade he has developed a technique of “painting” that involves pouring gunpowder onto a flat canvas, brushing out a design, and lighting it on fire, burning the image into the canvas. To finish paintings off he adds some details in with acrylic paint.

“I call them paintings, but in reality very little paint goes into most of my pieces,” he said. “That may change in the near future, as I have some ideas for future work that I’m really looking forward to playing around with.”

Shervin is a bit tight-lipped about what’s in store for the future, but this past year has been one of his biggest to date. He typically works on commission and has had a few prominent clients over the years, but none have been as big as two he picked up this fall: ESPN and Disney.

“The ESPN projects were a lot of fun,” he said. “I ended up doing five team logos for college football and the logo for ABC. We hired a videographer to film the entire process, and then ESPN used the footage as part of the pregame production for three prime time Saturday night games: Michigan State vs. Ohio State, Penn State vs. Iowa and Michigan vs. Penn State.”

The Disney project was similar. A video of Shervin creating another piece was used to promote the recent “Maleficent” movie.

“This was definitely the biggest audience I’ve ever had,” Shervin said.

That says a lot coming from Shervin, who is as well-known for his work as he is for his live performances creating it.

“The thing I love about my work is that it’s not only fine art but also a type of performance art,” he said.

Few people get excited by watching paint dry. Shervin’s work, on the other hand, is pyrotechnic.

The process of setting his canvas ablaze has quite literally been the spark to his career. Videos he posted online of his process a few years ago got over 15 million views in one week, rocketing the Jackson native onto an international stage. In addition to participating in live performance events in Jackson, like the Fall Arts Festival’s annual Sip and See and QuickDraw Art Sale and Auction, Shervin and his art-making have been featured on one of the largest German TV channels and during corporate events for companies like the Yellowstone Club and BFGoodrich.

“Projects like this are typically the result of someone seeing my work online or TV and they contact me,” Shervin said. “I have been extremely fortunate in that regard.”

While his eccentric art-making style has earned Shervin commissions large and small, how he came to his medium of choice was the product of a fruitful accident. When he was in college, he and his friends were trying to make rockets with the explosive material.

“We had a pile of [gunpowder] on our kitchen table, and so I laid it out into a big landscape and set it on fire to see what would happen. It burned the image into the table and was permanent,” Shervin said. “For years afterward I didn’t really do anything with it, just thought it was cool. About 10 years ago I got back into it to see what other things I could do with gunpowder and it just kind of developed from there.”

Shervin’s work can be seen locally at E.leaven Food Co., The Kitchen and Hatch Taqueria and Tequilas. If you’re interested in seeing Shervin’s fiery process yourself, the artist encourages people to contact him through his website, PaintWithGunpowder.com, to schedule a visit to his studio. You can also head to JHNewsAndGuide.com/scene to see a video of Shervin’s work.