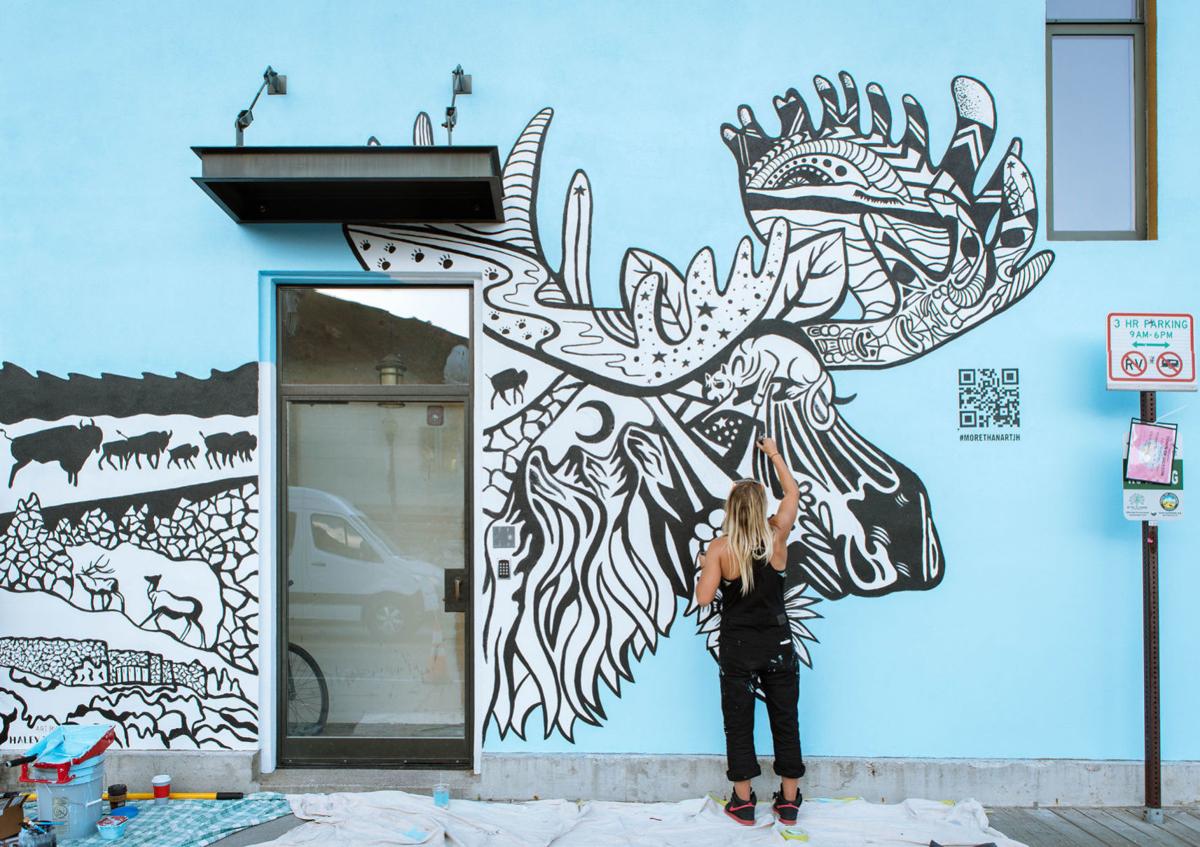 Haley Badenhop works on her new mural next to Jackson Drug. It incorporates elements found at the National Museum of Wildlife Art, like elk sculptures and views of the Sleeping Indian. It will be up until the end of the summer. 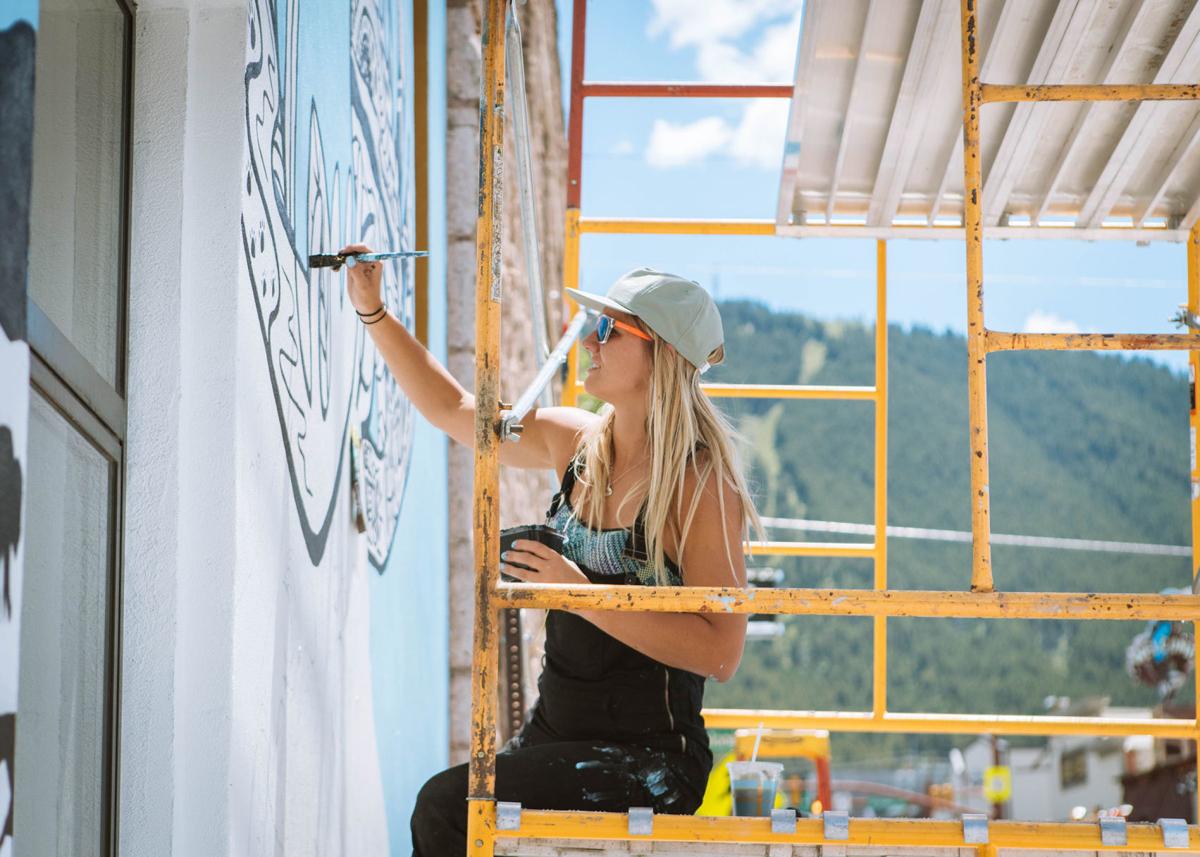 Artist Haley Badenhop used scaffolding to paint sections of a large-scale mural next to Jackson Drug on North Cache in downtown Jackson. 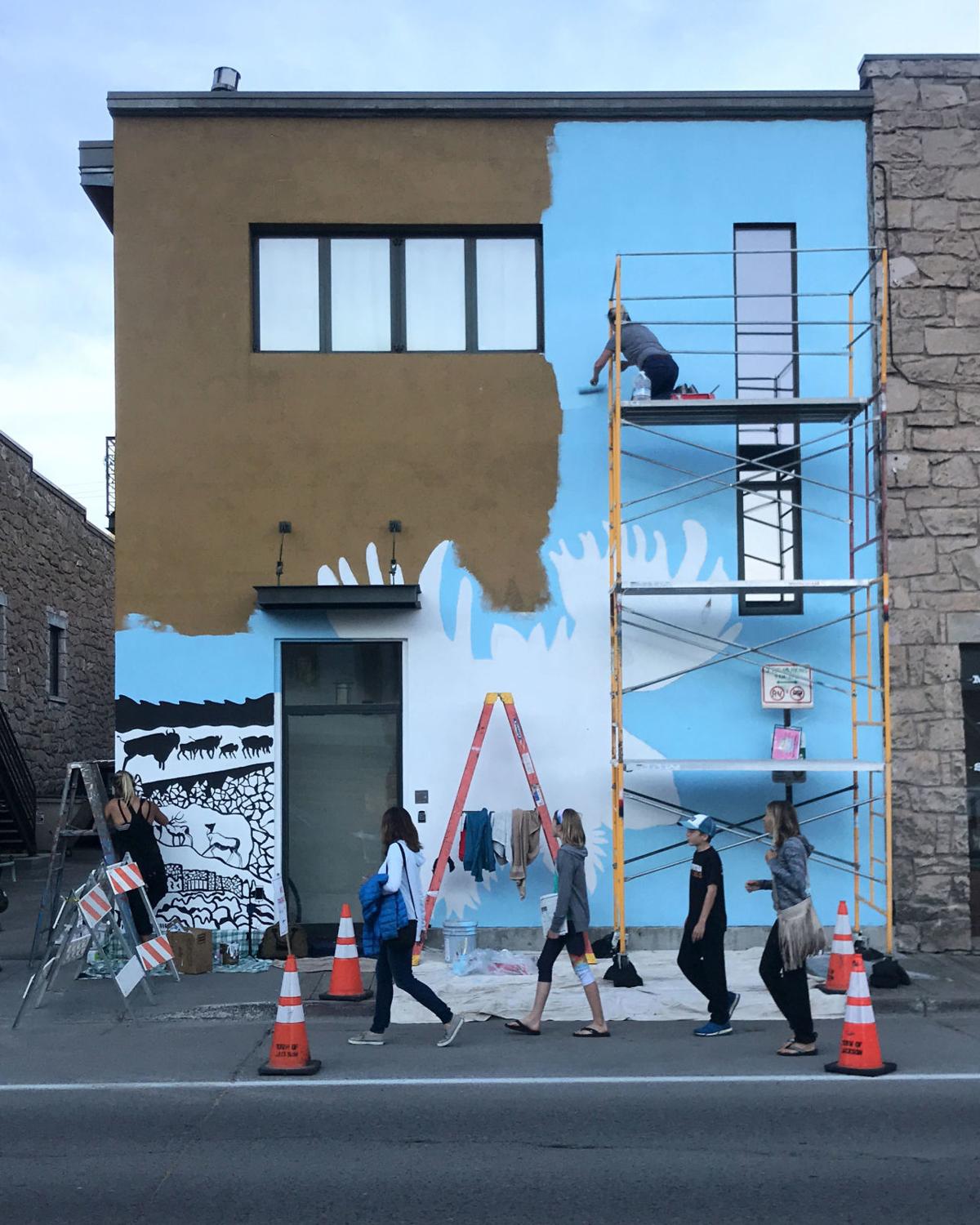 Tourists pass Badenhop as she paints. The mural is designed to promote the wildlife art museum as a complete experience.

Haley Badenhop works on her new mural next to Jackson Drug. It incorporates elements found at the National Museum of Wildlife Art, like elk sculptures and views of the Sleeping Indian. It will be up until the end of the summer.

Artist Haley Badenhop used scaffolding to paint sections of a large-scale mural next to Jackson Drug on North Cache in downtown Jackson.

Tourists pass Badenhop as she paints. The mural is designed to promote the wildlife art museum as a complete experience.

Artist Haley Badenhop paints like the wind. Her latest public art installation next to Jackson Drug came together in a week’s time.

“I like tight deadlines, so I was pumped to make it happen,” she said. “It is such a cool project, and it’s kind of unlike anything in town right now.”

Badenhop, who’s known for her distinct style of hand lettering mixed with line art and minimal color, worked with New Thought Digital Agency to create the mural for the National Museum of Wildlife Art. New Thought principal Jesse Ryan said it fits into the museum’s 2019 campaign, called “More Than Art,” which seeks to show the museum as an experience complete with a restaurant, a sculpture trail and more.

“The museum has, for a long time, been known for its exhibits and the wildlife art it brings in house, but it hasn’t necessarily been known for some of the alternative and perhaps recreational activities that are available up there,” Ryan said. “Part of the strategy our agency built for the National Museum of Wildlife Art is finding new unique ways to use art to encourage new museum visits and new interest in what the museum has going on.”

Town rules stipulate that sidewalks can’t be closed from June 15 through Sept. 15. So when the idea for a mural was conceived in the beginning of June, things picked up speed quickly. Badenhop created and revised designs in a few days before calling her mother, who lives in Ohio, for help painting the backdrop while Badenhop focused on the finer details.

Her mom flew out the next day.

“It couldn’t have worked out better,” Badenhop said.

Logistics, approvals and designs were finalized the night of June 13. Badenhop painted for 15 hours each on the next two days, at times on scaffolding. It rained at one point, sending blue paint streaming over the white. Badenhop said she was “panicking” but managed to wipe it off and not incur any lasting damage.

“It’s been crazy weather here,” she said. “That can really make a difference. I’ve done a lot of indoor murals, and I’m realizing how easy they are compared to outdoor ones.”

The mural takes one base image, a moose, and incorporates elements of the museum, like views of the Sleeping Indian, a representation of the lobby totem pole and sculptures of elk and bison, within it.

“It made it interesting enough where people aren’t just going to look at it, but they want to get closer and see what’s inside of it,” Badenhop said. “You might spot one thing and see what else is in there as well. We didn’t want people walking past it and not taking a look.”

Ryan said changing the mustard-yellow wall into a work of art adds to the overall visitor and local experience of Jackson.

A unique feature of the mural is what’s called a QR code. That’s the array of black and white squares that create a machine-readable label to store URLs. If passersby take pictures on an iOS or Android phone it should automatically recognize the unique code. Something will pop up on their screen, asking them if they want to go to another landing page for the museum. They can easily access info and discounts.

Badenhop started experimenting with larger projects relatively recently. Her work can be seen around town at Bin 22 and the Solitude Station at Jackson Hole Mountain Resort. The artist is also working on a soon-to-be painted mural at Orangetheory Fitness’s new gym.

“Painting small is fun, but when you see it come to life on a big surface it makes it a whole new piece,” Badenhop said. “I really like that.”

The progression to larger-scale works began in her own home.

“At home I’ve done every wall over the years,” she said. “And so after a while I thought, ‘Why don’t I do this for other people?’”

Badenhop thinks her new piece might even draw some visitors and their phones away from the iconic Town Square for a different look.

“Hopefully it catches on throughout the summer and people want a different backdrop than the antler arches,” she said.

The mural will be up only until summer’s end, so catch it while the days are still long and warm.