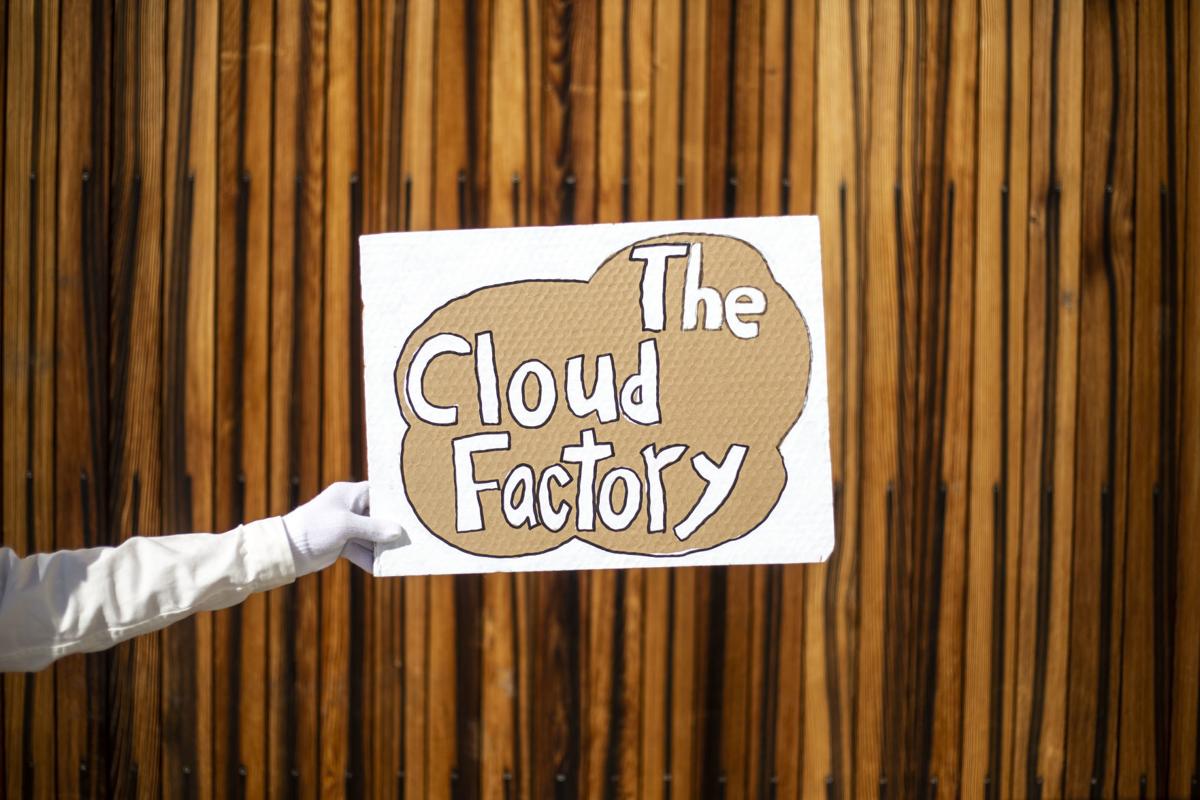 The Cloud Factory Grand Opening Celebration will be from 4 to 7 p.m. Friday on the Center Lawn. 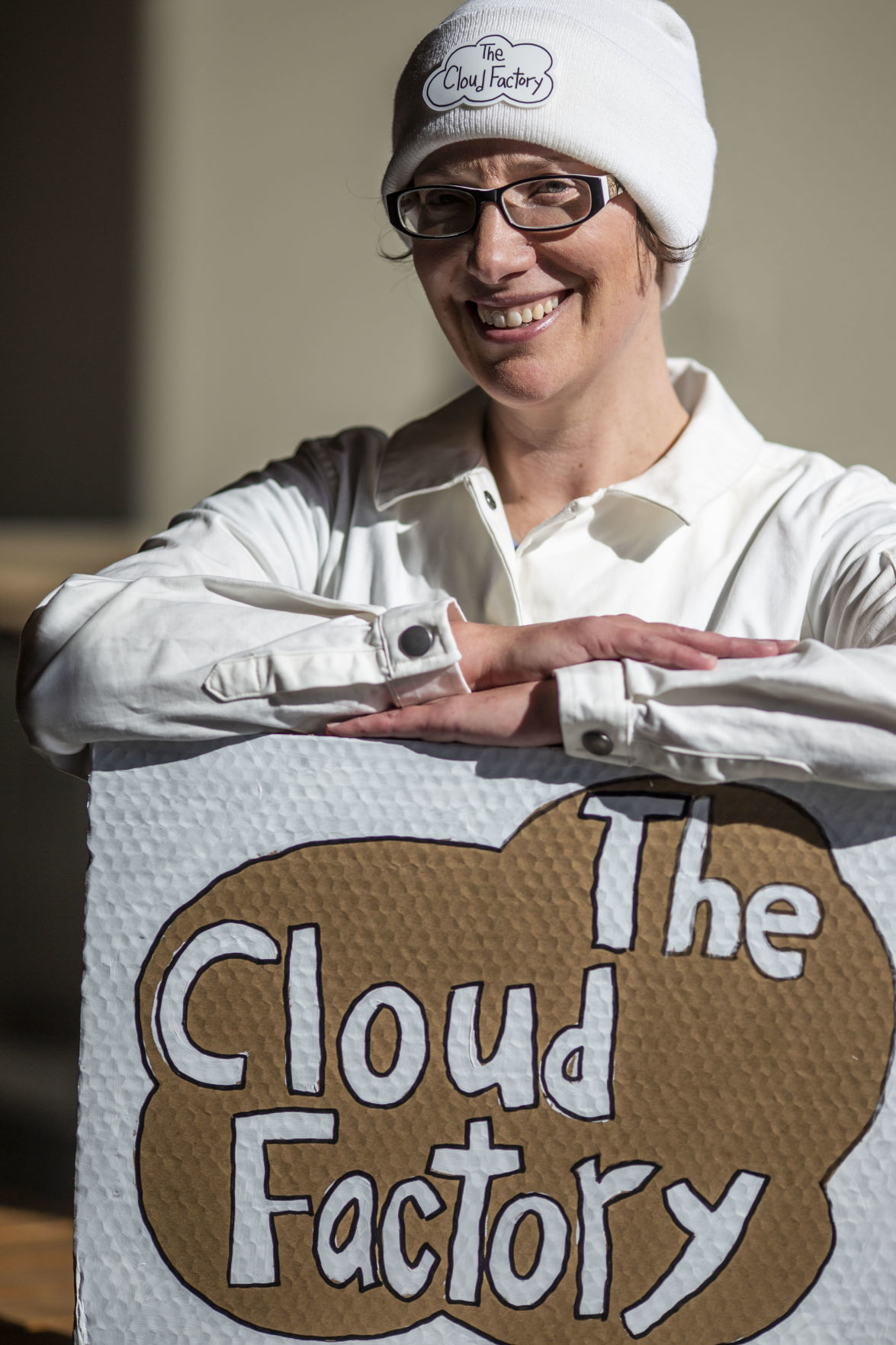 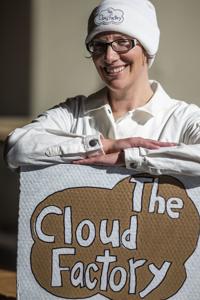 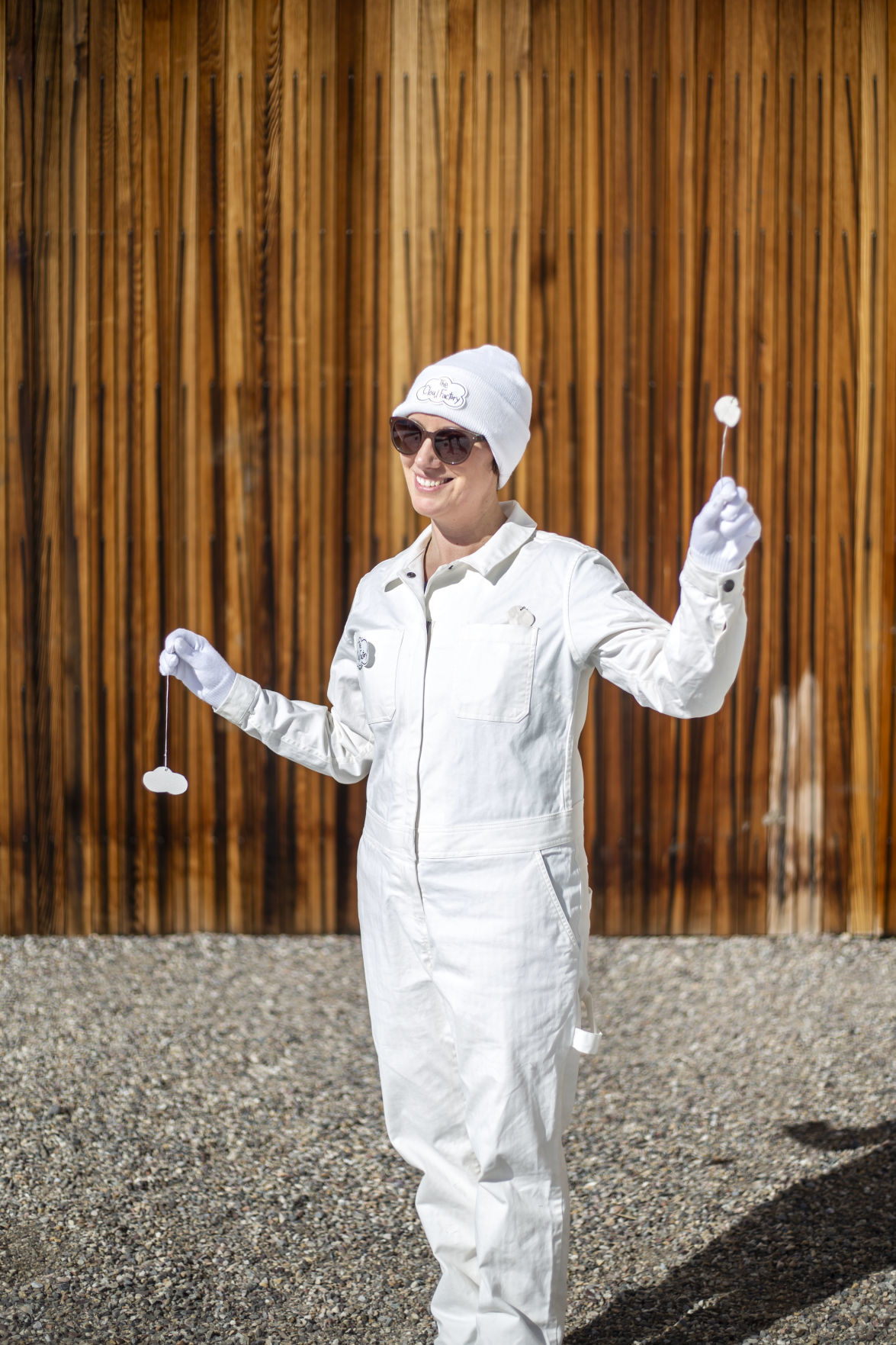 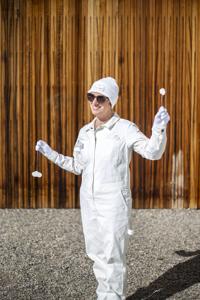 Cloud Factory CEO and Cloud Conductor Indigo Skyy, better known as Jenny Dowd, will host a Cloud Factory Grand Opening Celebration from 4 to 7 p.m. Friday at the Town Enclosure on the Center Lawn. 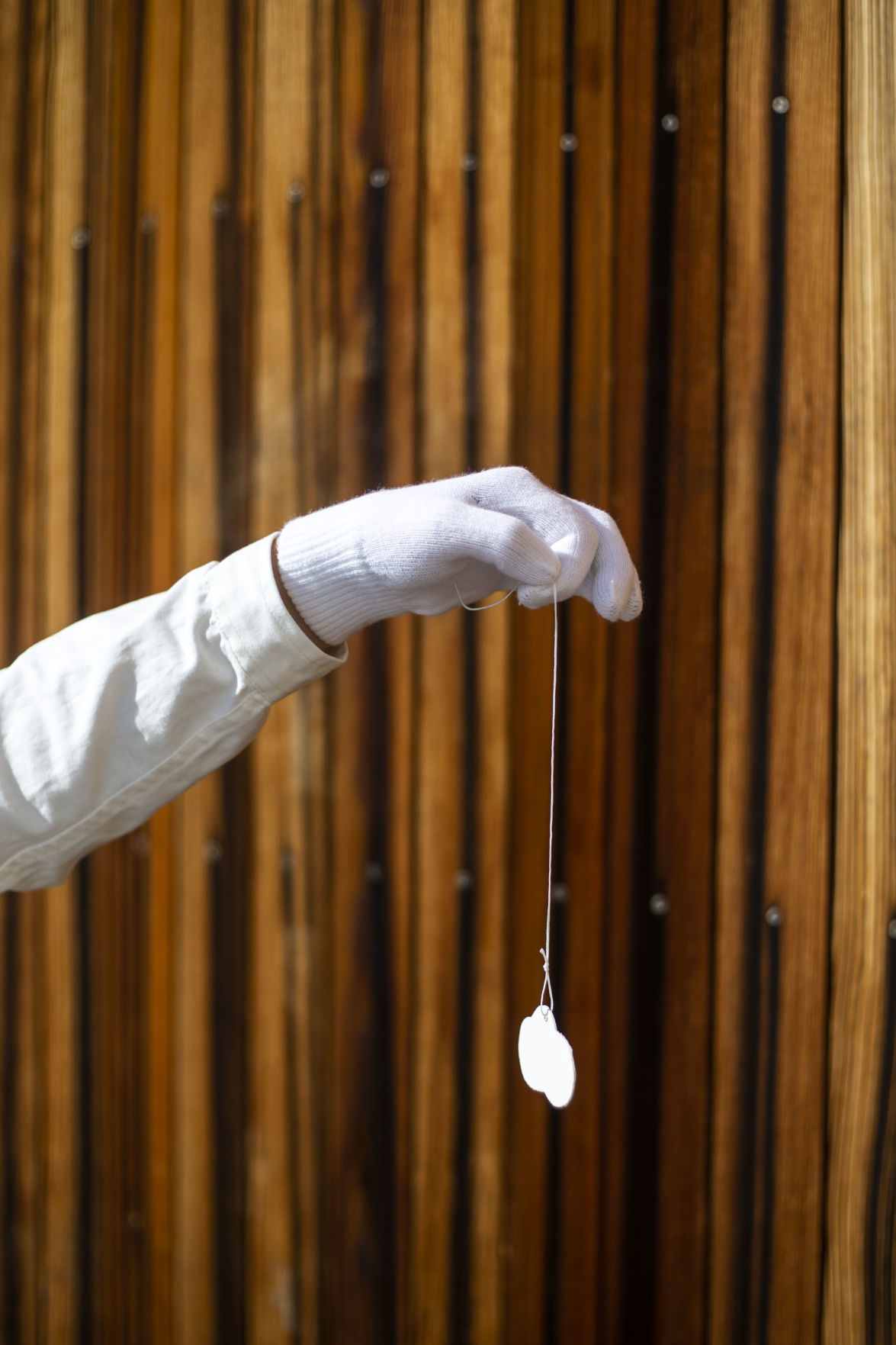 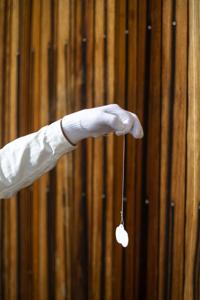 A cloud on a string. 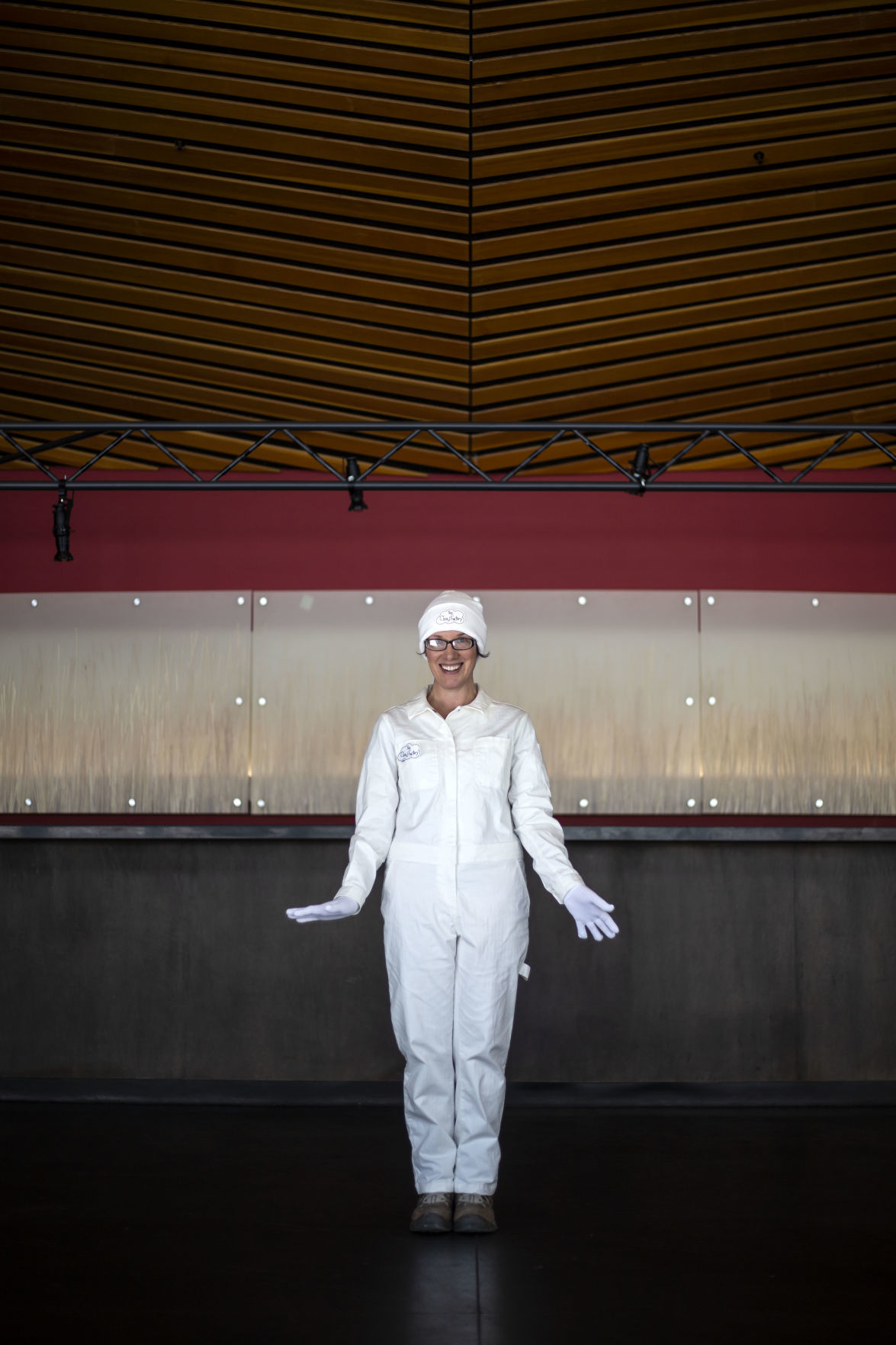 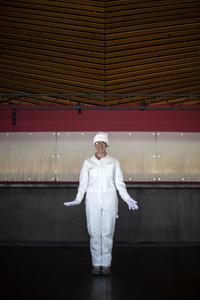 The Cloud Factory Grand Opening Celebration will be from 4 to 7 p.m. Friday on the Center Lawn.

Cloud Factory CEO and Cloud Conductor Indigo Skyy, better known as Jenny Dowd, will host a Cloud Factory Grand Opening Celebration from 4 to 7 p.m. Friday at the Town Enclosure on the Center Lawn.

A cloud on a string.

If you have been perusing the classified ads recently, you might have come across a somewhat cryptic help wanted ad:

“The Cloud Factory seeks curious, motivated volunteer employees to safely create and dispense clouds on Friday, March 13 in 2hr shifts from 11am-8pm at the Center for the Arts. Contact CEO Indigo Skyy via email to sign up.”

Who is Indigo Skyy? No one in Jackson knew until January of 2019, when someone resembling local artist Jenny Dowd in white coveralls lobbied a crowd at Jackson Hole Public Art’s Moonshot 5x5 event to help her bring the Cloud Factory to Jackson Hole.

The factory, conceptual in nature, has never manifested in physical form. Until now. From 4 to 7 p.m. Friday, Skyy and a team of volunteers will unveil the Cloud Factory at the Town Enclosure at the Center for the Arts.

The project was initially proposed as a one-woman operation, where cloud seekers would put a token into a cardboard vending machine in exchange for a cloud on a string or stick. Since that time the project has grown into a larger vision that requires the work of coin dispensers (which plop out free cloud tokens if you can track them down), cloud assembly workers and cloud dispensers.

The factory is ephemeral in nature — Skyy, the eccentric CEO and cloud conductor of the Cloud Factory, said it is expected to last “no more than 36 hours” — but it took a great deal of hard work to get off the ground.

Due to Skyy’s secretive nature and the tight-lipped Cloud Factory administration, little is known about the company’s origins or operations. But, perhaps because the organization is getting used to a more public presence with its grand opening, the News&Guide landed an exclusive interview with Skyy to discuss her and her factory’s storied past.

The following interview has been edited for brevity and clarity.

N&G: What are some of your earliest memories of clouds?

Indigo Skyy: Growing up in Kansas, I watched storms come in, and I remember one particular storm that was forming a lot of tornadoes. There were funnel clouds happening, starting to touch down and then going back into the clouds. Then it just broke up into puffy clouds and blue sky, and I watched that happen really fast.

I still have that visceral memory of clouds developing and thinking, “Oh there’s a storm coming in, but it looks like it’s a ways off.” Then you look back and it’s a wall, and you don’t know which way to go because it just looks like it’s going to envelop everything.

When I moved here I thought the storms were kind of wimpy ’cause they just [lasted] a couple of minutes. In Kansas we would have rolling thunderstorms that would last for hours.

N&G: Where is the Cloud Factory based?

Skyy: Technically it could be anywhere. This is actually the first time that we’ve had a physical version of the factory, which is new and exciting and a little scary. It’s definitely an experiment and a big risk. We thought the conditions were right to make it an actual structure for a short amount of time.

N&G: What was it like during the early days of the organization?

Skyy: In the early days it was just me by myself in a room trying to figure out how to make clouds. And I had to store them in an envelope or I had to pin them onto a bulletin board because my cat hates them. So I had to really sequester the clouds, put them in a spot and have them for specific uses.

It has been a theoretical factory for a long time. We’re moving into the actual.

N&G: What’s the mission of the cloud factory?

Skyy: I wrote it down so that I didn’t turn anything around. Clouds don’t move in a linear fashion all the time, so sometimes thoughts and ideas about cloud factories get a little elusive.

The mission of the cloud factory is to place a cloud in as many hands as possible. We believe that the intangible is actually attainable and a universe of wonder is contained in each one of our tiny clouds.

You look in a cloud and think, ‘Oh that looks tiny,’ but it’s actually huge up there in the sky and it’s actually really heavy, and it’s not something you can put your arms around. But we’ve figured out how to make a small cloud that’s portable. People can put it in their pocket. They can have it in their hand.

N&G: The cloud manufacturing industry is notoriously cutthroat. What has been a major challenge that you have had to face as an organization?

Skyy: There’s one in particular that comes to mind. I have to say it’s a little embarrassing. We should’ve seen it coming, honestly, and I take full responsibility for what happened.

We call it the “days of exhausting fog.”

I just thought it was a smoke screen and we didn’t take any precautions. We were completely blindsided, and we didn’t realize what happened at first.

The fog came in and destroyed our research, it smudged and discolored all of our notes and paperwork, and it clouded our memories. So even the event is a little foggy. We don’t really know how long it lasted, which is why we call it “the days of,” because it had to have been at least a couple of days. Unfortunately, we have records from this time period but we can’t read them. So I’ve kept them in a special container in hopes that eventually technology can erase that fog.

N&G: Do you think the “days of exhausting fog” event was born of malintent?

Skyy: We don’t know for sure, but we believe that this was an intentional sabotage by an organization that I think is really smug. They are called The Particularly Particulates.

They come up with this thing that’s really hard to say. Their commercials are the worst.

N&G: What other major competitors do you have?

Skyy: Our other biggest competitor is Factory Direct Clouds. I do admire them. They have really good coverage. They get clouds out everywhere, but I question their practices and the actual craftsmanship behind the clouds.

I have to admit that I have tried really hard to get in and see their production. I’ve applied for some residencies and apprenticeships, but, um, I think they know who I am and they were afraid I’m going to steal secrets.

N&G: Why Jackson Hole for the physical manifestation of the Cloud Factory?

Skyy: The Town Enclosure was a really big draw. Our technicians were really excited about this structure to hang the Cloud Factory from. What we’re making is going to be very temporary and we expect this to last no more than 36 hours. It is really experimental, and that structure provided just the right shape for our Cloud Factory.

N&G: What is production like at The Cloud Factory?

Skyy: We look for a variety of volunteer employees to produce the clouds. While they’re each trained on how to make the clouds, they each have discretion over what type of cloud they make and how they put it together. So I feel confident that everything the Cloud Factory makes is actually made by hand and it’s made by a person.

I don’t feel that I’ve seen any two clouds that look alike, so that makes me feel good about our product

N&G: What’s your approach when something goes wrong?

Skyy: The first thing I do is I usually get out of hammer and just kind of knock on it a little bit. I always start with like a little hammer cause I want to hear if there’s a change in pitch when I tap on it. I try to make sure I have a tape measure with me in a wrench. I hope I don’t have to pull out the saw.

Skyy: We are using a variety of materials to make the clouds. Some are on a stick so you can hold them up, and some are on a string so that you can hang them. People will have an option at the vending machine, of which type of cloud they would like, but the material of the cloud will be different, and they won’t actually get to choose that, so that’ll be a surprise. Some are really light and fluffy. Some are a little heavier.

N&G: What are clouds made out of?

Skyy: I don’t really know what they’re made out of. I have to admit that when our engineers start talking about these materials, I don’t quite understand the technical side. That’s really a terrible thing for a CEO to say, but I trust them, so it works. The clouds that the Cloud Factory prefers are clouds that are a well-defined shape — a cloud that you feel like you could just reach up and grab.

N&G: What is your ultimate goal for the grand opening?

Skyy: We’re a really small business right now. The goal is definitely to get our clouds out. We want to get them in the sky where people can actually see and experience them.  

Town Enclosure at the Center for the Arts, 265 S. Cache St.