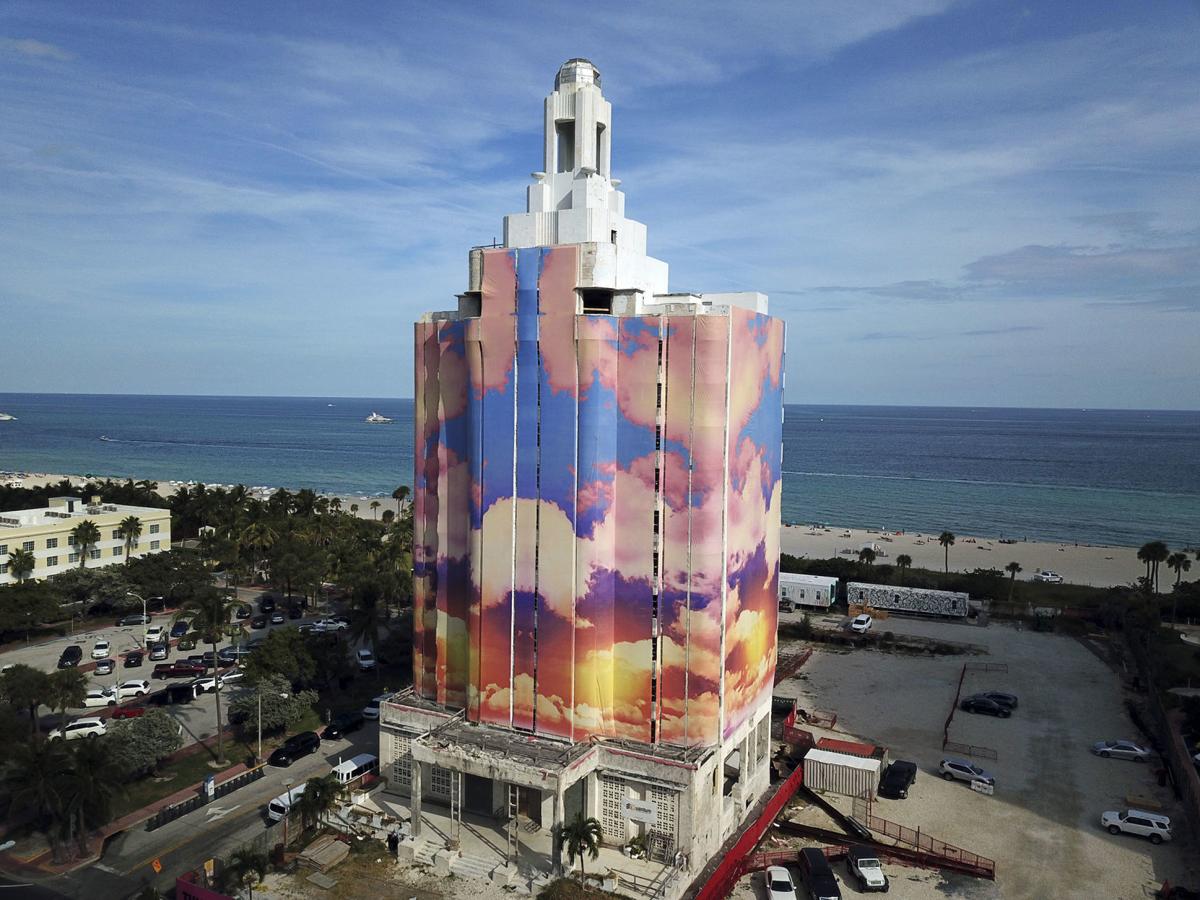 A metal painter by trade, Miya Ando also works in other mediums. She decorated the outside of the Versailles Hotel in Miami Beach, Florida, to match the colors in the Miami sunset, hoping that, at exactly the right moment, it would more or less disappear into the horizon. 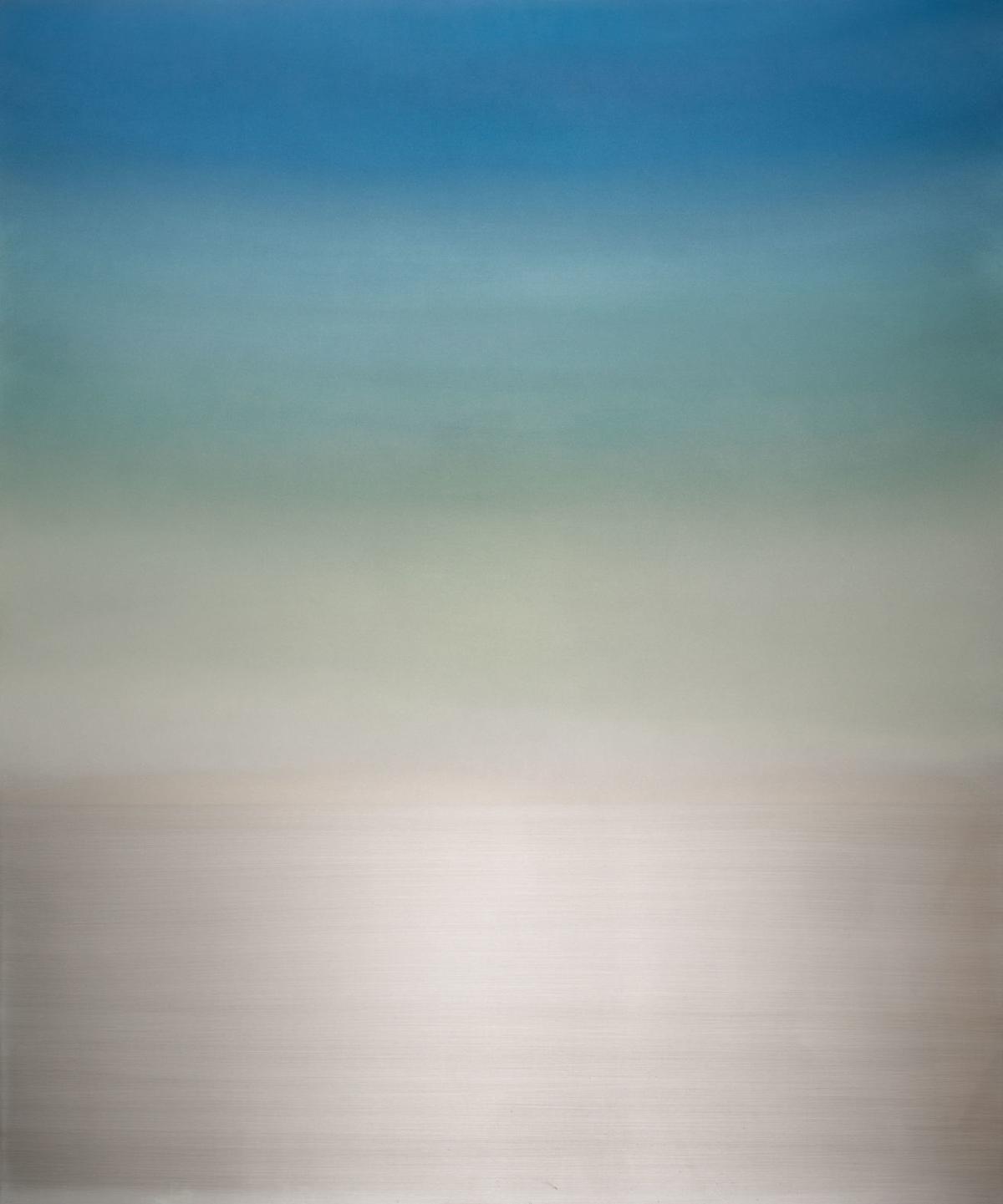 Miya Ando is a metal painter by trade. She is set to have works like “Kasumi (Mist) 6.5.1,” a 72- by 60-inch urethane pigment painting on aluminum, on display starting Saturday at Diehl Gallery.

A metal painter by trade, Miya Ando also works in other mediums. She decorated the outside of the Versailles Hotel in Miami Beach, Florida, to match the colors in the Miami sunset, hoping that, at exactly the right moment, it would more or less disappear into the horizon.

Miya Ando is a metal painter by trade. She is set to have works like “Kasumi (Mist) 6.5.1,” a 72- by 60-inch urethane pigment painting on aluminum, on display starting Saturday at Diehl Gallery.

One of Miya Ando’s earliest memories comes from when she was 3 or 4 years old at a Buddhist temple where her grandfather was the head priest.

She remembered crying, maybe because a cousin pinched her, and running up to her grandfather, who told her she needed to quiet down. A funeral was being held in the next room, separated from her by only a thin shoji screen.

“The partitions between the rooms are basically paper and wood,” Ando said.

Her grandfather explained to her that the people in the other room were praying. Hearing a little girl crying would disturb their silence, so crying was disrespectful.

That moment stuck with Ando, a half Japanese, half Russian-Ukranian-American artist who grew up both in California and a Buddhist temple in Japan. It taught her the importance of respect and ritual, ideas that she carried with her into her work on a sculpture commemorating the victims of the Sept. 11 attacks on the World Trade Center.

That sculpture, “After 9/11,” is in London. Ando built it with pieces of steel collected from the Trade Center buildings and wanted to make sure to respect the victims. She interviewed over 500 people to figure out what they thought of when they thought about death and found that, when discussing the departed, almost everyone looked up, whether or not they were religious.

“They don’t say they’re in heaven because they might not believe in heaven,” Ando said. “But there’s [light] usually involved and there is something in a plane higher than our plane.”

Ando set out to polish a piece of steel to a mirror finish, front and back. When she stood it up, it “dematerialized,” reflecting the clouds, sun and sky and redirecting light into the viewer’s world.

Though that piece was different from the metal paintings, Ando’s most frequent medium, set to hang at Diehl Gallery this month, the ideas of “dematerializing” and “reflecting” are themes that she carries throughout her practice.

In 2018 she was commissioned to reimagine the outside of the Versailles Hotel, a landmark building in the Miami skyline that had fallen into disrepair. Ando created an architectural mesh that displayed some of the colors of the Miami sunrise and sunset, which she described as “magnificent” and with “unique coloration.”

“If the sky were to look like that one morning at dusk or dawn,” Ando said, “then the building would in effect blend in to the sky or dematerialize and become part of the sky.”

The “Sora Versailles” project — “sora” is the Japanese word for “sky” — was a conceptual, experimental piece that created an experience for the viewer.

That idea of experience also drew Ando to working with metal and, specifically, depicting cloudy skyscapes in her metal paintings.

For her, doing so, and depicting sky, does two things: provide an experience for the viewer and focus the viewer on commonalities, rather than differences, albeit subconsciously.

“You could paint something to be metallic, but it [would] not reflect light like metal does,” Ando said. “So therefore these paintings become experiential because they shift and they change and they redirect light.

The clouds, whether in her “Sora Versailles” project or her metal paintings, are intended to unify. She uses natural imagery, or evokes things from the natural world because, as she said, “we all relate to clouds in exactly the same way.”

“I’m looking for bridges between people,” Ando said. “I mean, you look up in the sky and they’re very temporal — they’re temporal for everyone.”

Ando’s exhibition, “Clouds, Suns and Stars,” will hang at Diehl Gallery from Saturday to Sept. 2. She will attend an artist reception for the installation from 5 to 8 p.m. Saturday.  

This asset was updated to reflect that Miya Ando was commissioned to create the architectural mesh in her "Sora Versailles" project. — Eds.