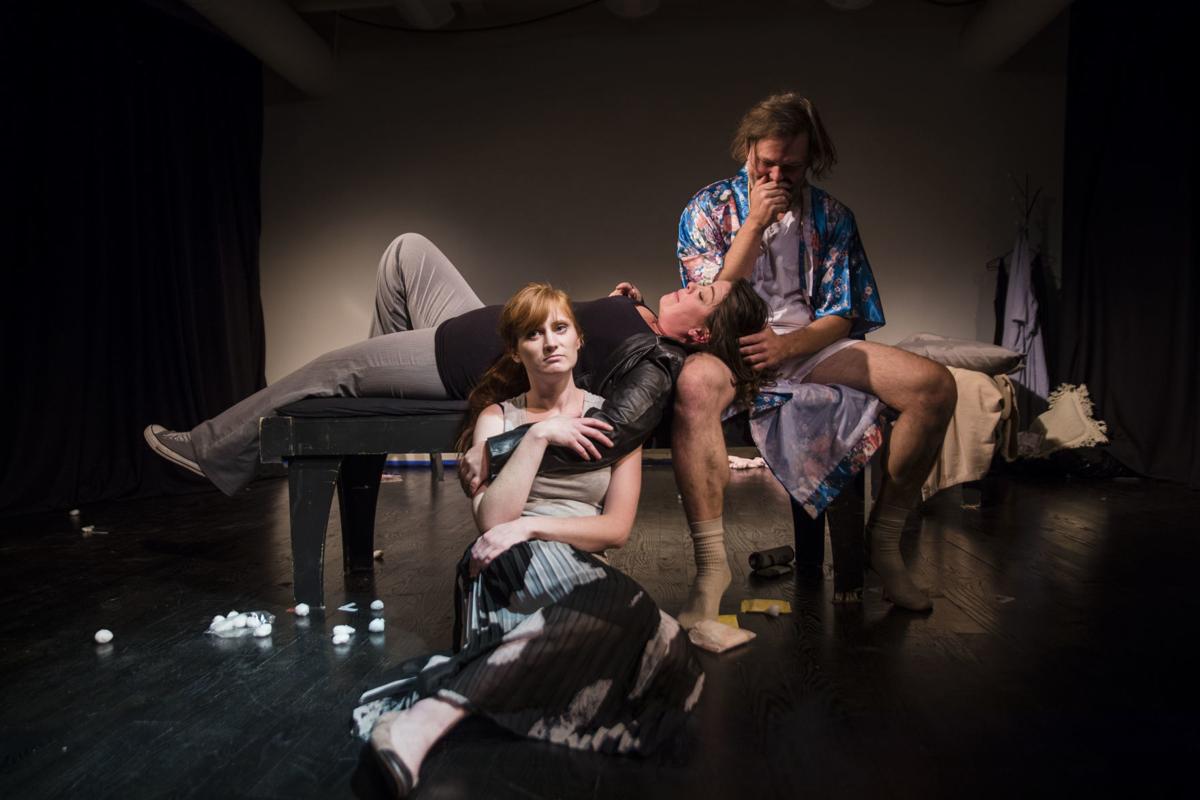 While running through a Thursday dress rehearsal for Riot Act’s new show “Skin a Cat,” Charley Daveler (left), playing Alana, holds Angel May Wise (center), who is playing a half a dozen or so female roles, as she lays on Bradley Smith (right), who is playing a similar number of male roles. The play, written by Isley Lynn, is a coming of age story that chronicles Alana’s personal journey from childhood to adulthood. 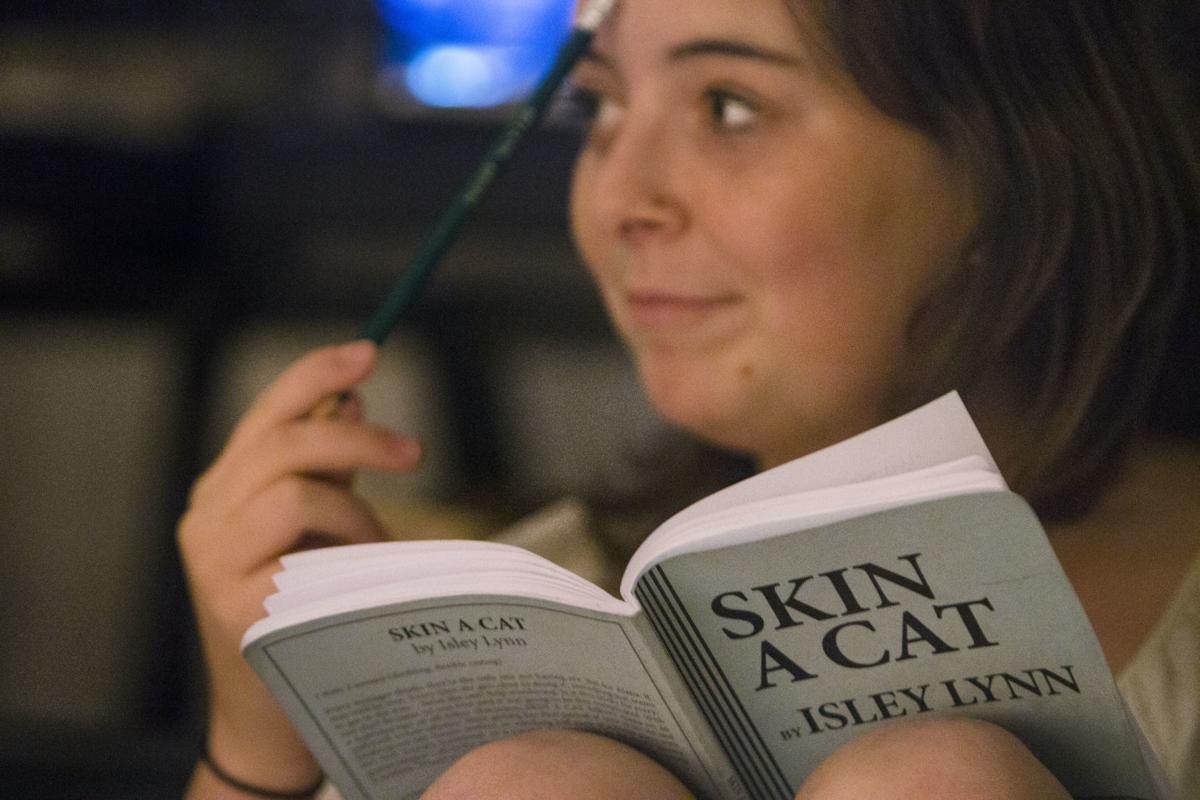 Emma Lilly Dillon Wise, 14, one of the actor’s daughter, reads from the script and helps actors run their lines during a dress rehearsal Thursday night for Riot Act’s upcoming show “Skin a Cat.” The show opens 7:30 p.m. Thursday, Sept. 19 at Center for the Arts in the Riot Act Studio.

While running through a Thursday dress rehearsal for Riot Act’s new show “Skin a Cat,” Charley Daveler (left), playing Alana, holds Angel May Wise (center), who is playing a half a dozen or so female roles, as she lays on Bradley Smith (right), who is playing a similar number of male roles. The play, written by Isley Lynn, is a coming of age story that chronicles Alana’s personal journey from childhood to adulthood.

Emma Lilly Dillon Wise, 14, one of the actor’s daughter, reads from the script and helps actors run their lines during a dress rehearsal Thursday night for Riot Act’s upcoming show “Skin a Cat.” The show opens 7:30 p.m. Thursday, Sept. 19 at Center for the Arts in the Riot Act Studio.

For “Skin a Cat” protagonist Alana, teenage girlhood is a series of horrific and unwelcome surprises.

Early in the play Alana gets her first period at the age of 9. Shortly after, she picks up a hand mirror, places it between her legs, and takes a long, hard look at her vulva. She is horrified.

The gory streaks of red and brown blood she finds in her underwear further repulse her. When she turns to her mother for guidance, the only things she receives are an icy, canned response and a book about puberty.

The slights continue to pile on for Alana as she comes of age — a skeevy first boyfriend, the inability to put in a tampon, awkward forays into oral sex, and, eventually, a diagnosis of vaginismus, a psychosexual condition that explains why her attempts at vaginal sex have only ended in seizures and immense pain.

“Skin a Cat” debuted in 2016 and its playwright, Isley Lynn, was inspired by her own experiences living with vaginismus when writing Alana’s story. But at its core, “Skin a Cat” is a coming of age story that explores the many ways in which it is difficult (and sometimes straight up impossible) to live up to expectations of womanhood.

Riot Act Inc. is putting on the play to open its 17th season in a production helmed by Macey Mott, who is also theatre company’s creative director.

The cast of three features Charley Daveler as Alana, who the audience follows along her journey to womanhood — or at least self-acceptance — from the ages of 9 to 25.

Angel May Wise and Bradley Smith round out the cast, each playing a half a dozen or so female and male characters who cycle in and out of Alana’s life.

Wise’s characters veer from friends who provide comic releif, to a distant mother and doctors who help give Alana a sense of acceptance over her body.

Smith, in his first theater role, rotates through a slew of male characters that range from the shockingly callous to the sweetly sentimental, bringing an exceptional blend of slapstick humor and disarming warmth to each part.

Completing the team is intimacy director Samantha Kaufman, who was brought on to help choreograph the sex scenes but also to help the cast feel more comfortable around one another throughout the performance.

A bit of intimacy

As an intimacy director, Kaufman frequently gets boxed into the first role.

But Kaufman, who works for Intimacy Directors International, is also trained in implicit bias, conflict resolution, diversity training and mental health first aid, all of which are skills she uses in her line of work.

The sex scenes in “Skin a Cat” take place largely under sheets and through clothes as Alana experiences a series of sexual encounters with men in her life. Each one is choreographed carefully — not unlike a fight scene — to be easily replicated in each rehearsal and performance.

When director Mott first approached Daveler about auditioning for “Skin a Cat,” the actress — who was most comfortable behind the scenes as a playwright or doing tech — was nervous but excited about the prospect of playing a role like Alana.

“That was something that interested me, learning how to be vulnerable like that on stage,” she said.

Working with Kaufman was also a novel experience across the board for the cast.

“It was something different, you know — weird even for theater standards — but it really did help break that touch barrier,” Daveler said. “And now Brad and I are pretty comfortable with each other in terms of like, ‘OK, so this is down to business, or I’m going to put my hand here, I’m going to do this and that.’”

But Kaufman is also quick to clarify that intimacy training is about a lot more than just choreography. Through her role on set, she worked with Daveler, Smith and Wise to encourage communication, establish consent and set clear boundaries throughout the entire rehearsal process.

“It’s not just coming in, choreographing and leaving,” Kaufman said.

Sex, but so much more

Intimacy coaching as a professional practice has in many ways evolved in tandem with cultural conversations surrounding consent.

Kaufman said that the #MeToo movement and the #NotInOurHouse movement in the Chicago theater community have helped popularize intimacy coaching in the performing arts world.

“Intimacy serves to address the moments of connection on stage that put an actor in a position where their bodies will naturally create a reaction,” Kaufman said. “The intimacy director comes in and makes sure that it is safe, repeatable, empowering, and tells the story that they want to tell. So I think a misconception is just that it’s just sex. It’s sex, but it’s also so much more.”

For Kaufman “Skin a Cat” was a play that already approached human sexuality frankly and holistically. By working with the cast she wanted to make sure they were comfortable enough with themselves and with one another to address those topics as best they could in their performances.

“The actors could rely on the structure that we built together, and not have to worry about if something went too far,” she said. “Together, we could all collaboratively make a story that we all agreed on and a story we all wanted to tell.”

But “Skin a Cat” is also inextricable from the well-established canon of coming of age stories centered on female adolescence, womanhood, sexual frustration and neuroticism.

Despite the familiarity of the narrative, its frustrations persist because the same general expectations of womanhood remain stubbornly in place. Those expectations, thought they’ve improved marginally over the decades, still generally align with heterosexuality, marriage, motherhood and blissful domesticity.

Any performance of gender that breaks away from the norm — which is to say, cis and straight — is still seen largely as an aberration.

As a woman unable to have vaginal sex, Alana joins the struggle of everyone else rendered an outlier by the patriarchy: lesbian women, gay men, transgender and intersex people and any and all queer people who have dealt with these issues.

Smith hopes the play provokes reflection among those who watch it when it comes to issues of sexuality, communication and consent.

“I hope anyone who sees the play asks themselves, ‘How can I be a partner who really makes sure that the person I’m with — gay or straight — is comfortable and really having a good time and doesn’t feel uncomfortable or pressured or guilty?’”

It takes a few misguided sexual partners, good friends, gynecologists and psychiatrists, to get Alana to arrive at that same conclusion.

“I think the play, by the end, with Charley and her character Alana, it’s about accepting yourself for whatever you’re into and being kind to yourself,” Smith said. “To me, it’s self acceptance, and realizing that everyone deserves to be accepted by the people they share their lives with and deserve to feel loved and whole, even if they’re different.”  

“Skin a Cat” by Isley Lynn