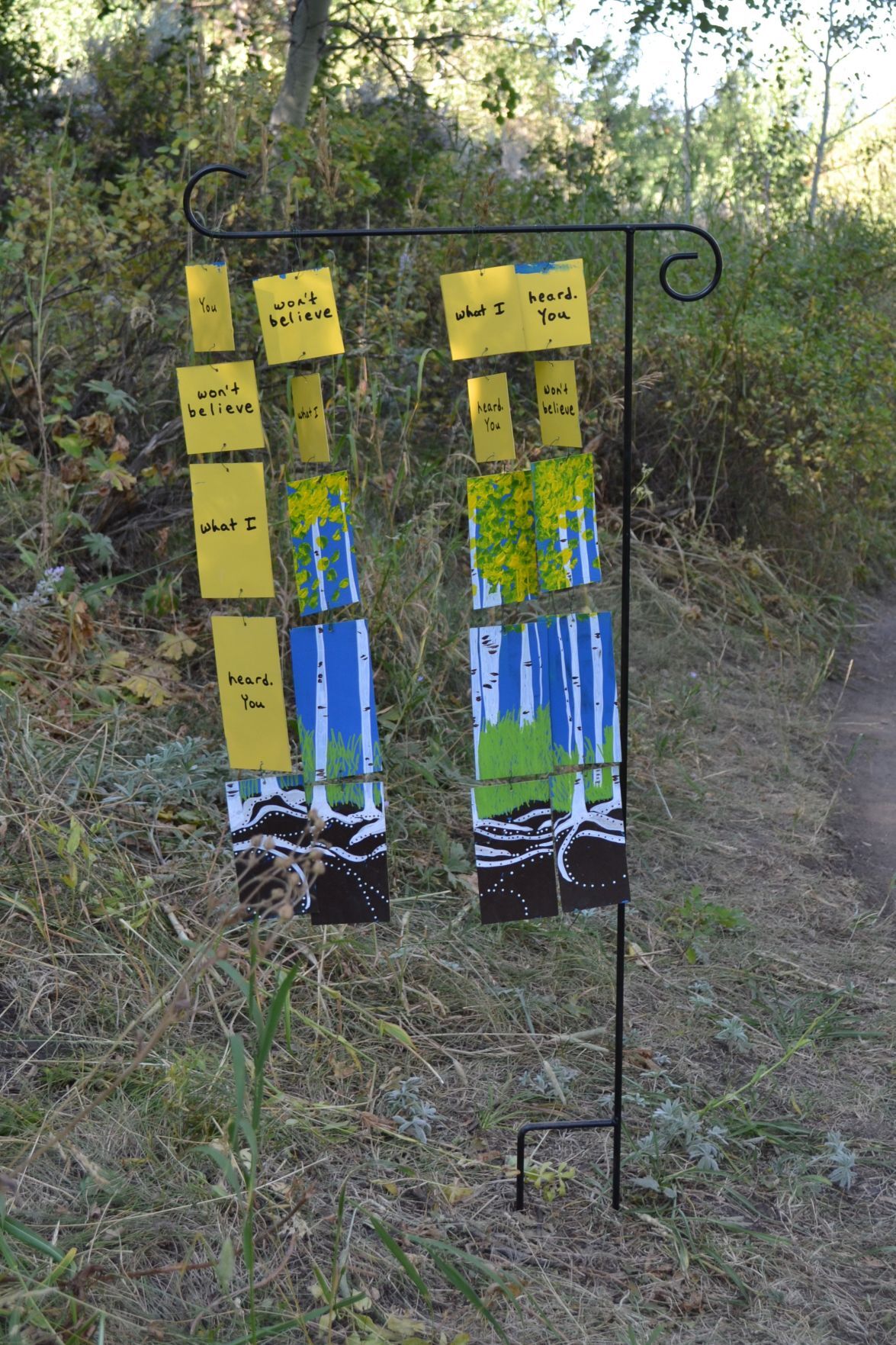 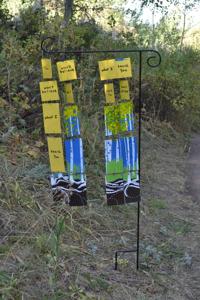 In part of the “Shaky Translations” installation, Jenny Dowd’s paintings Matt Daly’s poetry combine to imagine aspens as gossips spreading information up and down the KC Trail. 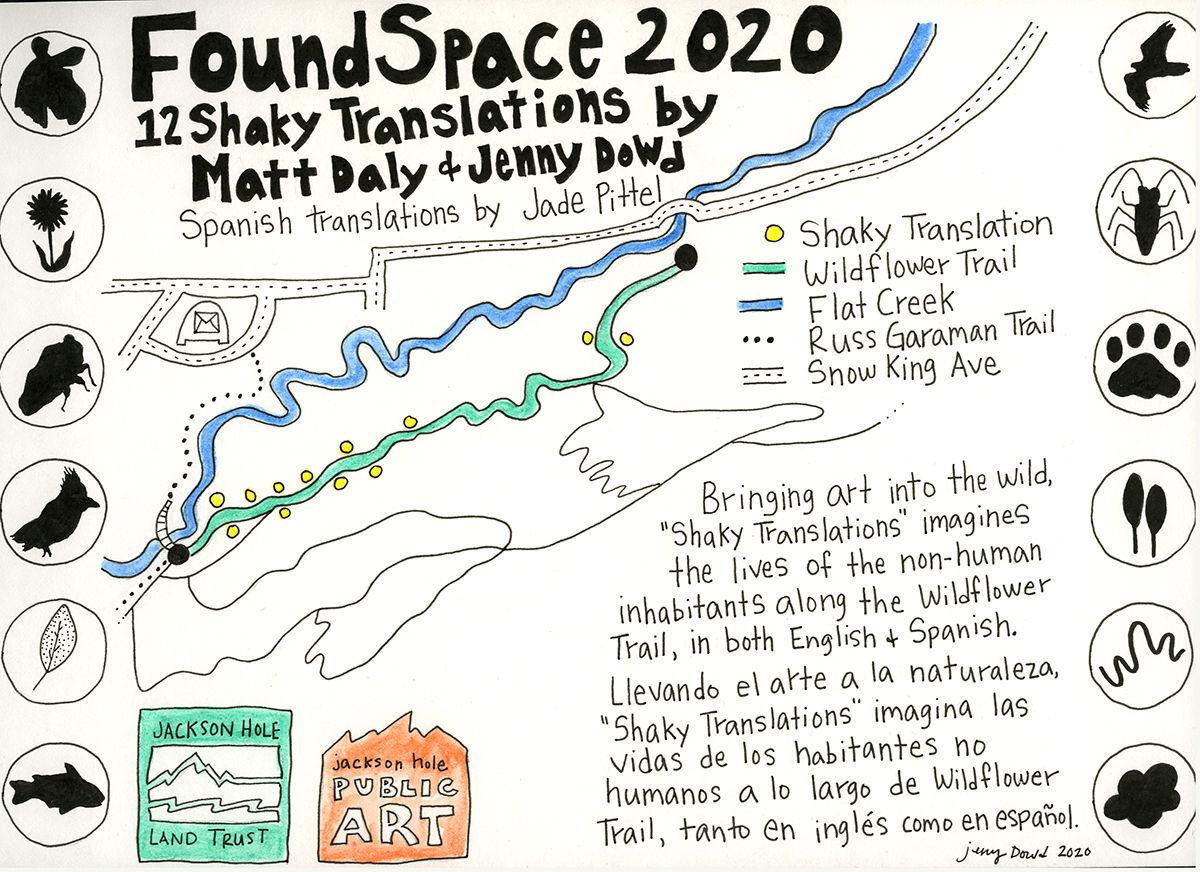 The 12 artworks created by Jenny Dowd and Matt Daly as part of FoundSpace 2020 can be accessed by following this map from Snow King Avenue to the trails of Flat Creek.

In part of the “Shaky Translations” installation, Jenny Dowd’s paintings Matt Daly’s poetry combine to imagine aspens as gossips spreading information up and down the KC Trail.

The 12 artworks created by Jenny Dowd and Matt Daly as part of FoundSpace 2020 can be accessed by following this map from Snow King Avenue to the trails of Flat Creek.

A flock of ravens sits atop a grove of trembling aspen. Some of the trees’ leaves are still green, some are turning yellow. The black birds caw to each other as a creek bubbles below. Clouds float above. A mountain lion stalks its prey in the distance.

Have you ever wondered what animals, plants and other elements of nature are thinking as you hike, run or mountain bike your way through the wilderness?

Artist Jenny Dowd and poet Matt Daly have. And they give them voices in the latest edition of the public art series FoundSpace, a project of the Jackson Hole Land Trust that seeks to engage the community through art to raise awareness of public-access spaces the trust protects.

Jackson Hole Public Art also partners in the program, helping to develop a theme and connect the Land Trust with artists in the community.

Dowd and Daly created 12 pieces sited along a stretch of the KC Trail between Linda’s Trail and Josies Ridge on Snow King Mountain, where in 2010 the nonprofit land conservation organization protected 30 acres for recreation as part of its Flat Creek Corridor Protection Project. The two artists’ goal, and the continued goal of FoundSpace, is to connect the living land with its human users through art.

The FoundSpace pieces, collectively titled “Shaky Translations,” are dynamic, colorful works of art positioned just off the KC Trail. They take the form of yard signs cut into square tiles that dangle from a garden stake. On one side Dowd has painted one of the area’s wild inhabitants: a cloud, a creek, a fish, a flower, a bug. On the other side Daly has supplied a poem imagining what the inhabitant might be thinking.

The strands of tiles are subject to the will of the wind, so each hiker on the trail encounters a different variation of image and words. The kinetic word-paintings beg passersby to take a closer look and to interpret the world (or at least Snow King Mountain) from a new perspective — acknowledging that humans are not the only presence on the land.

The concept for “Shaky Translations” started with aspen trees (Betula tremuloides) and their fluttering leaves, which the tiles mimic as they flap against each other.

“They’re easy to personify,” Dowd said of the trees, “because they talk to each other and they communicate. We took that to mean that maybe aspens are really gossipy. All the way, up and down the path, they’re just like, ‘Wow, you just won’t believe what I heard. You won’t believe this.’ … Or maybe they’re complimenting people.”

Such loose interpretations of our natural cohabitants’ thoughts, and the way the tiles move in the breeze, led to the title “Shaky Translations.”

Daly came up with the subjects and the poetic expressions of their perspectives. Humor frequently grew from the concept.

“I’m a big fan of the moose,” Daly said. “Imagining this little dialogue between a mother and baby moose, kind of thinking about how they move around together — that was really fun to write.”

The longhorn beetle gave him another perspective: “That one really captured the sense of the energy of the longhorn beetles, when they’re flying around and just flying until they crash into something.”

Daly and Dowd incorporated Spanish into their collaboration. Some poems are entirely in English, others all in Spanish and some a mixture. Jade Pittel did the translations.

“Every piece is special,” said Jr Rodriguez, community conservation manager at the Land Trust. “But the Spanish pieces reflect social mobility and inclusivity. It’s not every day that we have Spanish-focused art in Jackson. ‘Shaky Translations’ is helping to change that.”

The Land Trust usually installs its FoundSpace project on trust-protected lands at the start of each summer. But this year’s program was delayed by the COVID-19 pandemic, so installation began in mid-August, with the last pieces going up in mid-September.

“Public art in a pandemic year is super important,” said Alex Keenan Pope, project manager for Jackson Hole Public Art. “And to figure out ways to continue to inspire and to educate and to get people outside and giving the general public something to do has been a big driving force of what we’re putting out there this year.”

The collaborators hope “Shaky Translations” will inspire Snow King trail users to take a moment to think about the land they recreate on and the stories that all of the life around them might tell — if it wrote poems for human beings.

The installations will be up until Nov. 1 .