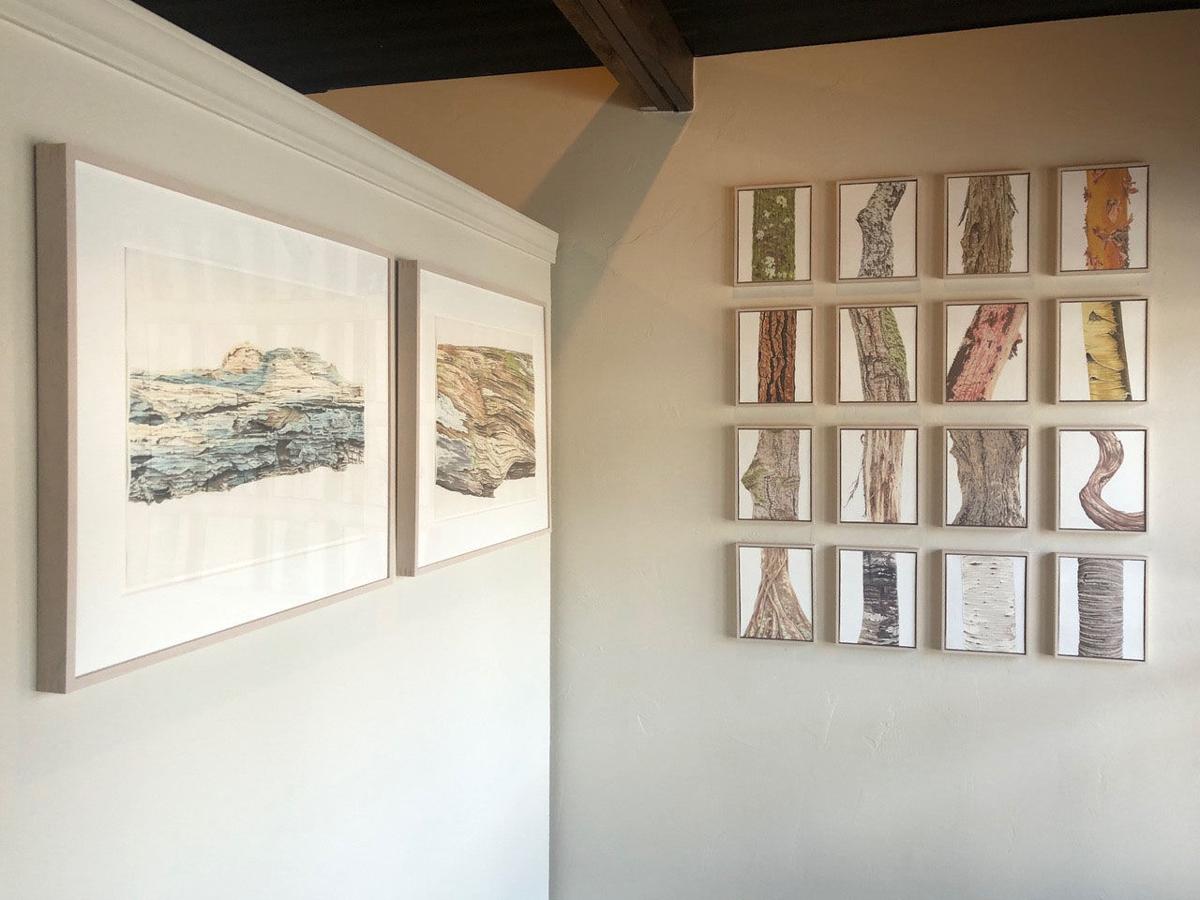 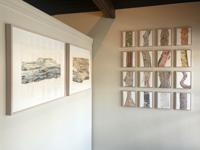 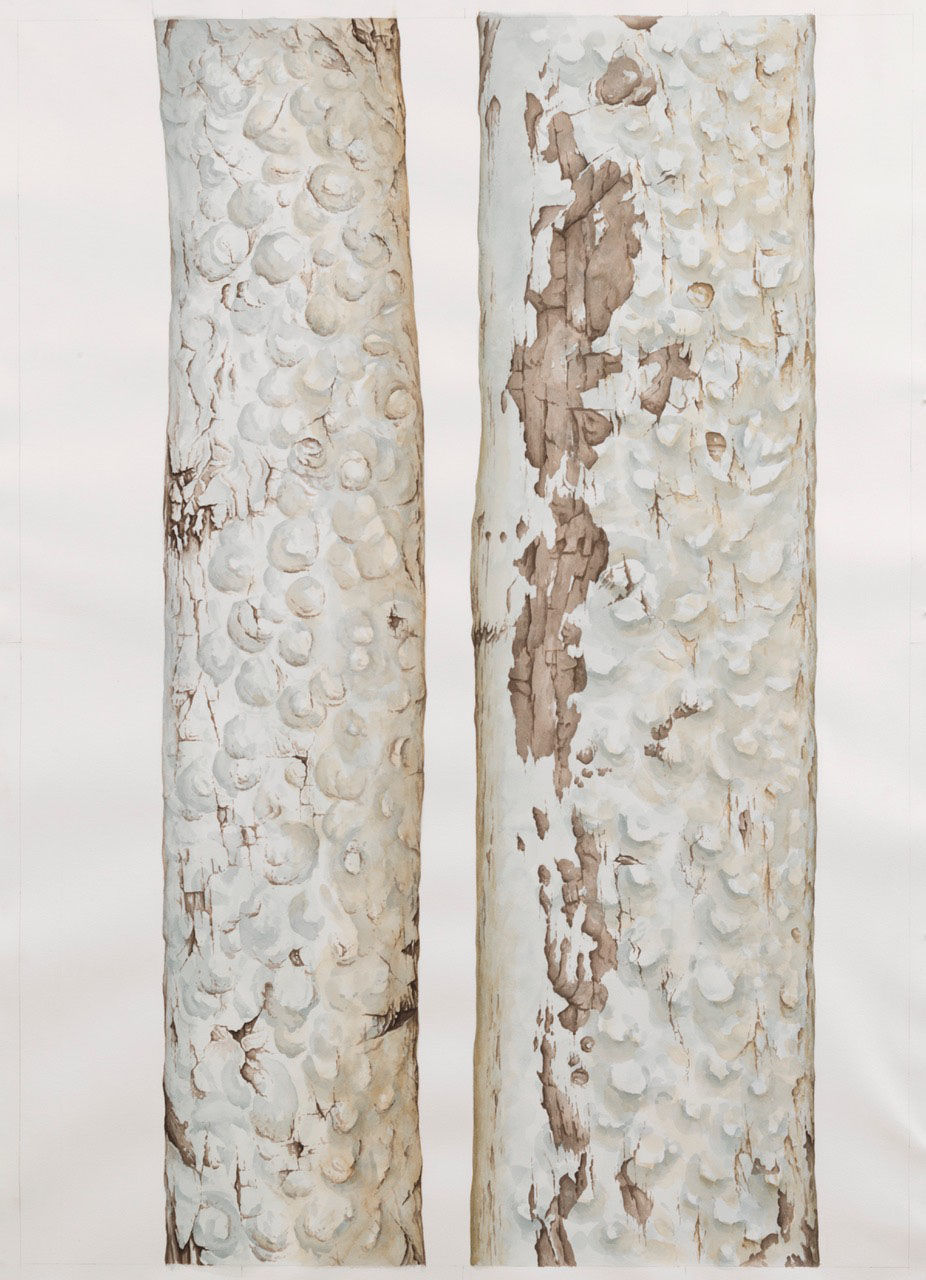 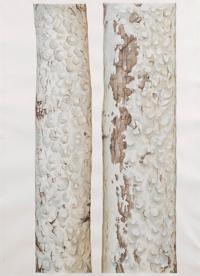 “Sickly Siblings” by Sean Cavanaugh is part of “Under the Elder’s Gaze,” the first exhibition to grace Shari Brownfield Fine Art’s new space in the historic Wort Cabin on 55 S. Glenwood St.

“Sickly Siblings” by Sean Cavanaugh is part of “Under the Elder’s Gaze,” the first exhibition to grace Shari Brownfield Fine Art’s new space in the historic Wort Cabin on 55 S. Glenwood St.

The Lahaina Banyan is one of the largest trees in the United States. Its canopy stretches out over a quarter mile, overshadowing the grounds of a 1854 courthouse in Maui, Hawaii. Up close the tree’s tangled, trunk-like roots resemble human arteries and veins. For over five months Sean Cavanaugh painstakingly painted the intricate patterns of the banyan’s bark as part of a series of macro watercolors of tree trunks.

“I felt like I was doing a dissection,” he said.

From 5 to 8 p.m. Thursday, Cavanaugh’s watercolors will be highlighted in “Under the Elder’s Gaze,” as part of Shari Brownfield Fine Art’s grand opening in the Wort Cabin.

Each work features deeply textured and realistic renderings of bark placed against a simple, white background. Cavanaugh developed the style in order to draw the viewer’s focus to the intricate details of his arboreal subjects, but he didn’t always paint that way.

Fifteen years ago Cavanaugh was hiking on a small Caribbean island deep in the rainforest. For most of his career he watercolor-painted expansive landscapes, but in the jungle he couldn’t see more than 20 feet in front of him. At first he felt overwhelmed. There were layers and layers of vegetation and a deluge of different shades of green in every direction, but it led him to an important discovery.

“I dealt with it by picking out individual leaf shapes and pulling the forest apart,” he said. “I kept dissecting the landscape to focus on particular bits.”

Removed from any background or sense of scale, Cavanaugh painted individual leaves, tree silhouettes, rocks and clouds. In macro view his paintings of lichen-covered, cracked rocks took on abstract and intricate forms. By zooming into those commonplace objects, he recalibrated his vision to see beauty in a new way. He hopes his art will enable others to do the same.

“No one is a better abstractionist than nature,” he said. “I’m just doing my best to represent it.”

Six years ago Cavanaugh captured the decomposing, red inner wood of a white birch tree. Now, when he walks in the forest he is always accumulating imagery of bark.

“I have a heightened sense for these small wonders,” he said. “It’s something you learn and don’t give back.”

A lot of the trees featured at the exhibit are based on species found around his family home in the Catskills.

After 20 years in the gallery world, Brownfield, who is hosting the exhibit, switched careers to become a private art advisor. Growing up, she thought she wanted to be a painter. That is, until she bought her first piece of art.

“I believe art has the ability to transform lives, and being part of that buying experience gives me goosebumps,” Brownfield said.

She was looking for an office space when she stumbled upon the Wort Cabin, a historic log structure in downtown Jackson. After acquiring the cabin she expanded her vision for Shari Brownfield Fine Art, which was previously focused on consultation, as a venue for hosting exhibits and educational events.