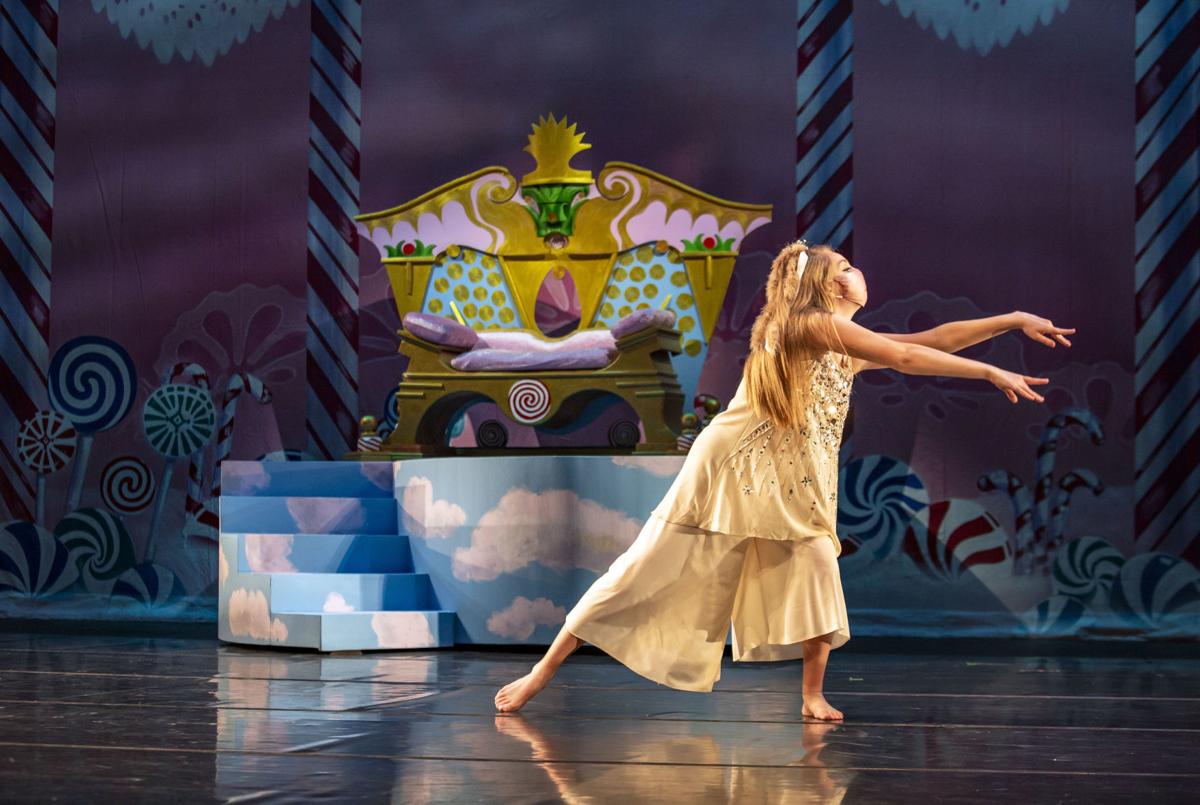 Ashley Hovinga, a Jackson Hole High School senior, performs as the element “Air” during the Dancer’s Workshop Nutcracker Sweets show at the Center for the Arts on Saturday. Due to COVID-19, the performances were live streamed instead of viewed by a live audience. “It’s bittersweet,” said Michaela Ellingson, one of the show’s production leads. “But they’ve all stepped up to the plate in an awesome and beautiful way.” 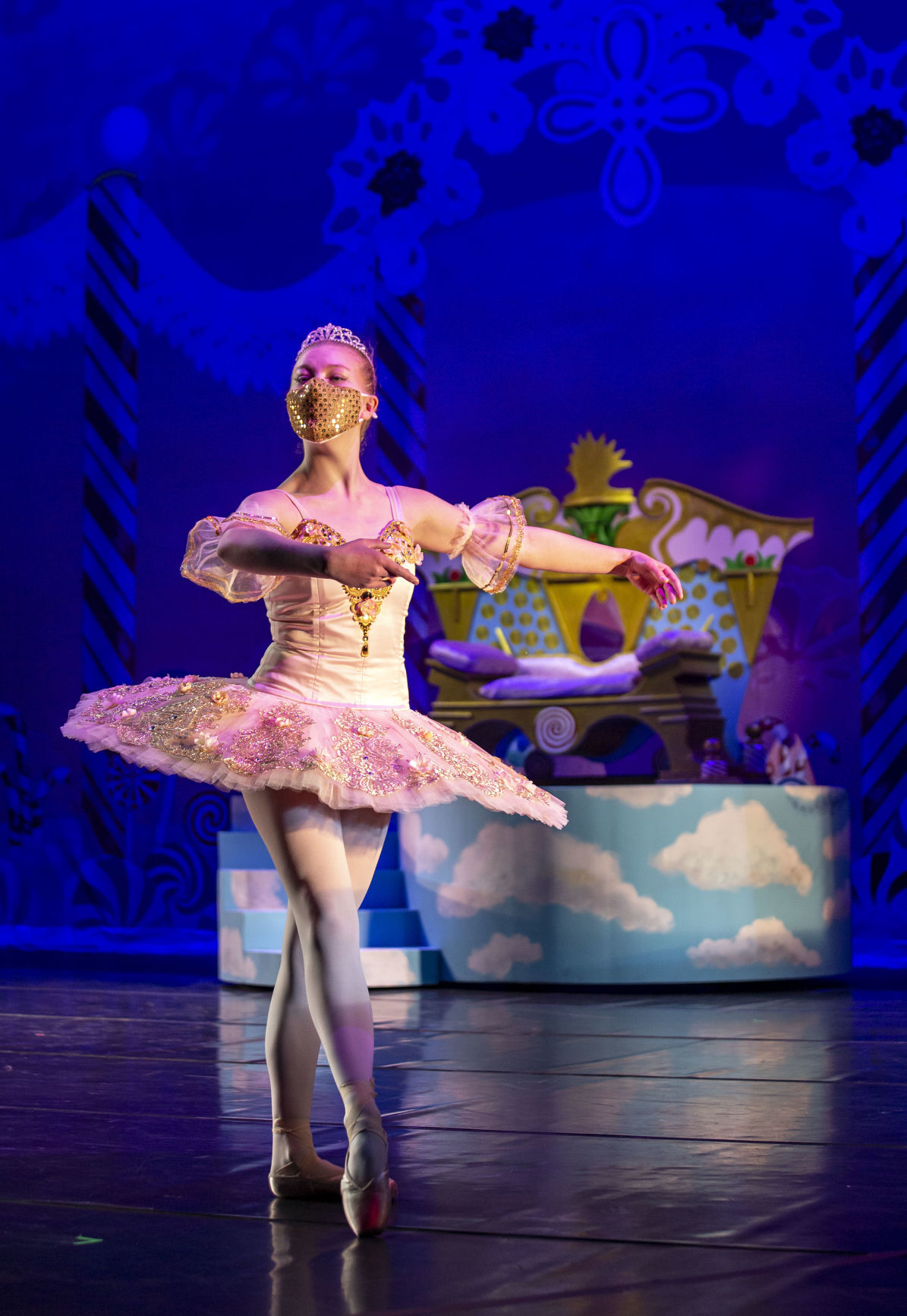 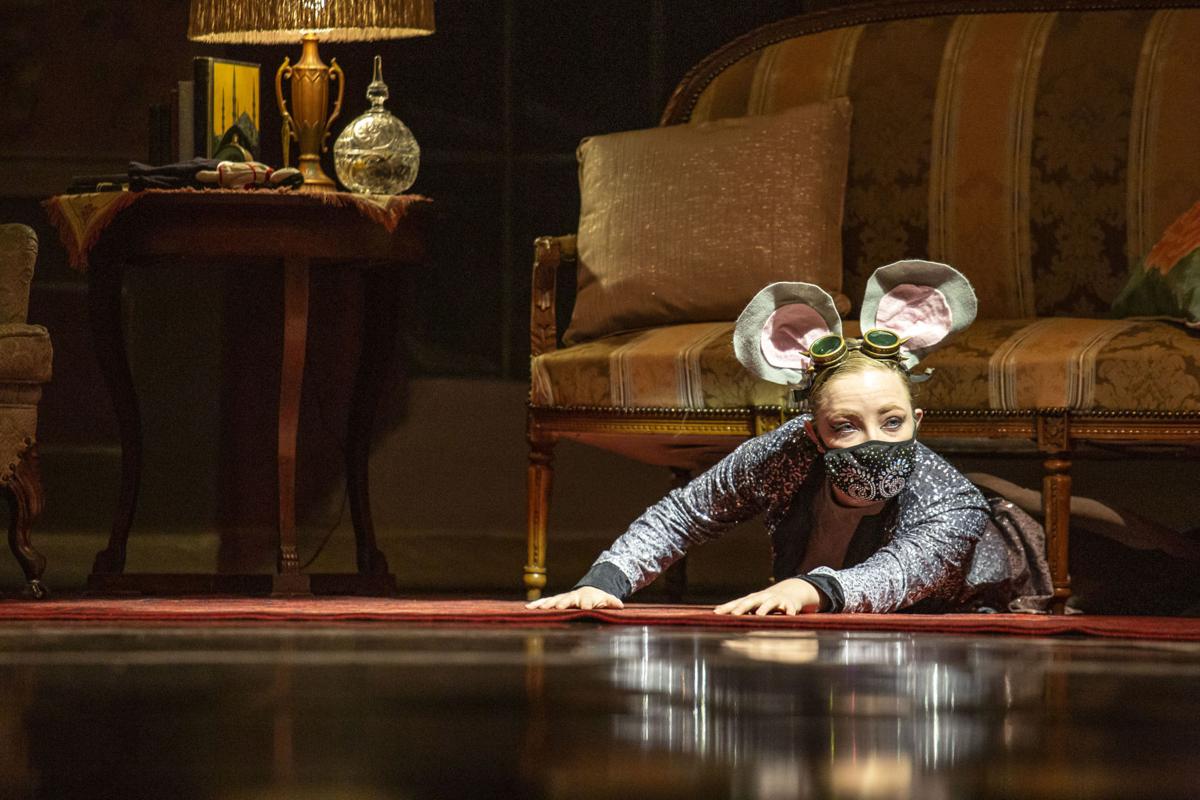 Ashlyn Fadala, a Jackson Hole High School senior, performs as the Rat Queen during the Dancer’s Workshop Nutcracker Sweets show at the Center for the Arts on Saturday. Due to COVID-19, the performances were live streamed instead of viewed by a live audience. “It’s bittersweet,” said Michaela Ellingson, one of the show’s production leads. “But they’ve all stepped up to the plate in an awesome and beautiful way.” 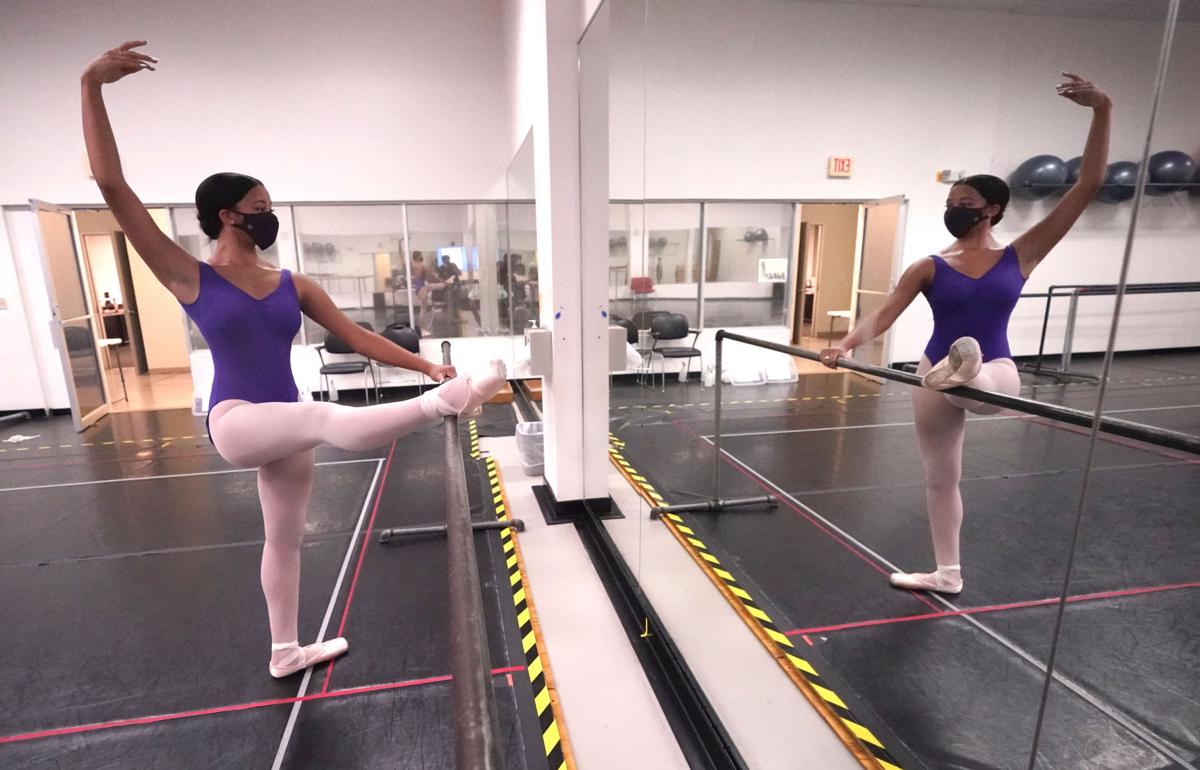 Ashley Hovinga, a Jackson Hole High School senior, performs as the element “Air” during the Dancer’s Workshop Nutcracker Sweets show at the Center for the Arts on Saturday. Due to COVID-19, the performances were live streamed instead of viewed by a live audience. “It’s bittersweet,” said Michaela Ellingson, one of the show’s production leads. “But they’ve all stepped up to the plate in an awesome and beautiful way.”

Ashlyn Fadala, a Jackson Hole High School senior, performs as the Rat Queen during the Dancer’s Workshop Nutcracker Sweets show at the Center for the Arts on Saturday. Due to COVID-19, the performances were live streamed instead of viewed by a live audience. “It’s bittersweet,” said Michaela Ellingson, one of the show’s production leads. “But they’ve all stepped up to the plate in an awesome and beautiful way.”

And yet, Case said, Dancers’ Workshop has stuck by the holiday staple, even in the face of extraordinary limitations and restrictions. She and her colleagues believe they can bring something new to the century-old tradition, using their “speciality of creating unique and original renditions of classic tales,” Case said.

Drawing on its stable of student dancers, from veterans to newcomers, as well as professionals from Contemporary Dance Wyoming, the venerable community dance nonprofit will present this year’s characteristically lavish pageant via video starting Christmas Day — just one change necessitated by the coronavirus pandemic — via DW’s website (DWJH.org). A donation of $25 (the usual price for an in-person performance) is requested.

Returning to the roots of “The Nutcracker,” which Prussian author Hoffman cast in a much darker light than what one often sees on stage today, Case argues that the narrative’s magic originally came from its reliance on a child’s imagination.

“Right now,” she said, “I feel like what the world needs more than anything is magic.”

So she and the rest of the Dancers’ Workshop creative team used their imaginations, too, going so far as to rework some of the central elements of the ballet for a production they have dubbed “Nutcracker Sweets.”

In standard stagings the lead character, Clara (played by 10-year-old Fern Varga in DW’s show), and the handsome Nutcracker prince journey to the Land of the Sweets, where they enjoy coffee from Arabia, tea from China, chocolate from Spain and candy canes from Russia. This time the four “sweets” have been abstracted into elements: earth, wind, fire and air (the last played by senior Ashley Hovinga).

They kept the Sugar Plum Fairy, played by senior dancer Annika Peacock, but a villainous Rat King is replaced by a Rat Queen, danced by senior Ashlyn Fadala.

Case “searched the world over for a female Nutcracker doll,” found one and gave it to senior Brooke McGough to embody.

“We’ve done everything that isn’t usual,” Case said. “We’re doing our own version, for sure.”

Idiosyncrasy rules at Dancers’ Workshop. Some characters might be dropped, others might be added — only to pop up at unexpected places in other shows. For DW’s 2018 production of “Snow White,” Case said, “we had a million little kids who wanted to be in it.” Accordingly, Rehearsal Director Bob Berky — an Obie award-winning actor — conjured a million little dust mites for them to embody. They reappeared in 2019’s “The Lion, the Witch and the Wardrobe.” Their absence this year is partly due to a smaller cast, Case said, but “mostly because Clara’s parents are very fastidious.”

Speaking of fastidiousness, to minimize the potential for COVID-19 exposure the studio limited its cast to about 50 student and professional dancers; usually it finds (or makes) a role for anyone who wants to perform. Ellingson organized dancers into groups based on school pods whenever possible and scheduled rehearsals so carefully, Case said, “the scheduling Michaela does is literally an act of choreography itself.”

But Ellingson said it isn’t all bad: Those parameters sometimes actually fostered creativity. For example, unable to load the stage as usual with dozens of dancers (the largest scene this year features just seven), they focused on polishing the movements of a few, she said.

“There’s been a beautiful silver lining to have to adapt and think in different ways,” Ellingson said. “It’s given us ... a lot more license to work on detailed, beautiful physical choreography.”

After two months of rehearsing, DW finished filming earlier this month, with the help of a local freelance crew.

Historically, ballet — like the vision of “The Nutcracker” itself — is ephemeral, sucking the audience into a fantastical realm that exists until the curtain closes. And then it vanishes.

“That’s what I love about dance,” Ellingson said. “It’s here and then it’s gone.”

This time will be different. The film is “a whole new beast that will last forever,” she said.

That came with new challenges as well as opportunities. The creative team had to adjust much of the set and choreography to play better on camera. Friends and family in the audience were replaced with posters bearing words of encouragement — “We’re watching!” — set up in the empty auditorium.

On the other hand, no one has to miss the show. Even fans from out of town will be able to see “Nutcracker Sweets” without traveling across the country, and the dancers themselves will have a keepsake to keep for the rest of their lives.

Ellingson is a Jackson native and former dancer with the studio; the 28-year-old makes her return to the venture this year as Clara’s grandmother. She remembers how much she looked forward to her own final production. After years of practice, countless hours of rehearsal and dozens of performances, “your senior show is where you get highlighted,” she said. “You get to be the star.”

As she told her students, “I know this isn’t the show you dreamed you’d have,” but she has been inspired by their positivity.

“One of them looked at me the other day,” Ellingson recalled, “and said, ‘I’m just so happy we’re doing anything.’”

When it came down to it, Case said, they didn’t have much choice. Choosing between a recorded performance and no performance at all was easy.

“We’re just really trying to keep the tradition of our winter production alive,” Case said, “and feed the children’s imagination.”  

Upon your donation of any denomination ($25 is Dancers' Workshop's typical in-person ticket price), you will receive your exclusive access to this year’s holiday film feature, available starting Dec. 25. Go to DWJH.org for info.