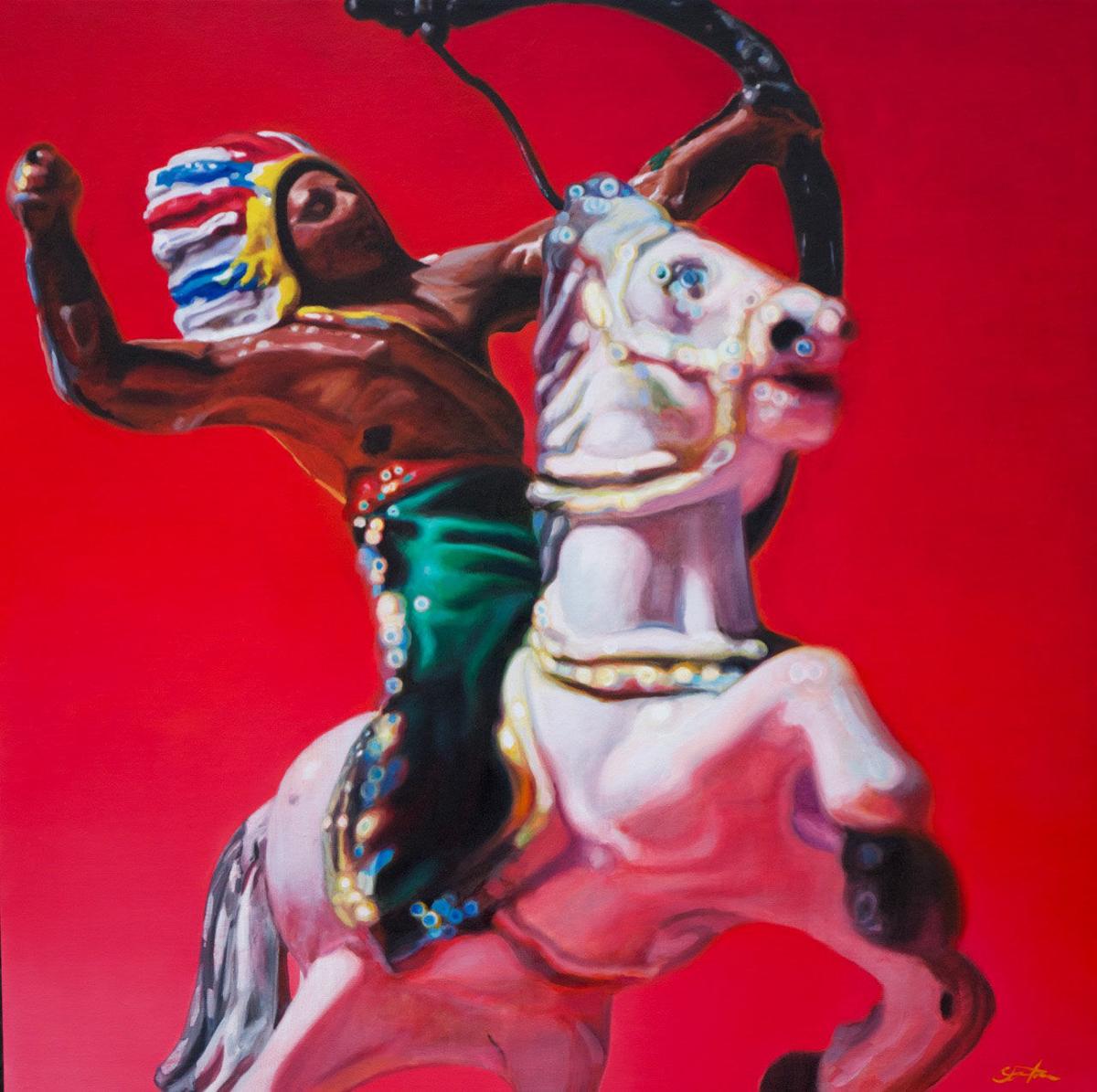 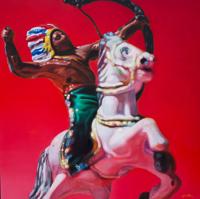 Overton uses toys to make humorous and meaningful comments about the contemporary West. This is the Salt Lake City painter’s“Live for the Sun,” a 36-by-36-inch oil on canvas. 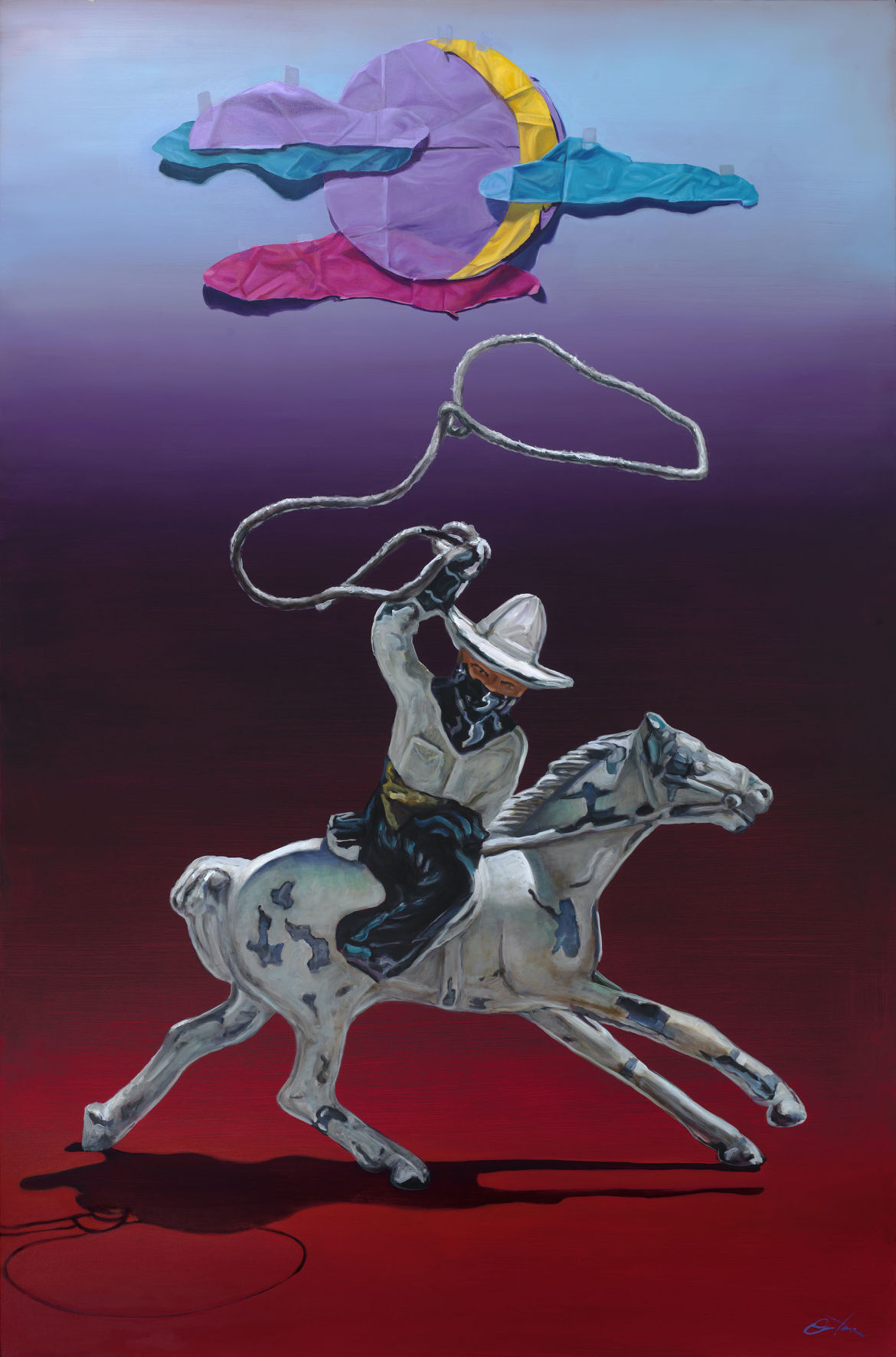 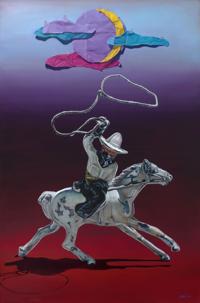 The role of trickster is one Bradford Overton has been playing his entire life.

“As a kid I was a super rebellious little trickster,” said the Salt Lake City painter, whose new work hangs at Altamira Fine Art through the end of the week. “That’s what I did. ... I was a troublemaker, and I decided I wanted to do things just how I wanted to do them.”

Overton quickly came to the realization that being an artist was really the only thing he “wanted to do,” and that set off a career that has spanned more than two decades. His work has evolved dramatically during that time, and the “trickster” archetype has become increasingly evident in his work.

The artist began to embrace his playful side when he first tried painting still-life scenes of vintage Western toys. Those images have since become a motif for Overton, but the artist says he doesn’t like to feel tied down to just one thing.

“I’ve done some more contemporary things, like a series of paintings of cardboard boxes that were minimalist paintings,” Overton said. “I just keep doing different things. I may drop the toys at any moment. ... I don’t know. But I still love doing them, so I’m still doing them.”

“People love something that’s Western but fun and playful,” she said, “and he’s found a unique area where that works really well for him, and that’s these vintage toys.”

Western art is typically seen as serious, she said, but Overton’s playful approach is refreshing.

“In the West,” Overton said, “I think there’s more space to be who you are and play how you want, and that’s what I do.”

Like his other work, “Trickster Rides Again” integrates irony, visual puns and humorous imagery with meaningful scenes of the American West.

Overton named music as one of the things that he loves, hence, many of the exhibit’s works are named after popular song titles, setting a “soundtrack” to the paintings.

McDowall said things are “easing back into normalcy” as more people receive their coronavirus vaccinations.

Those who are vaccinated are welcome to come by with or without their masks, she said, while others are asked to still maintain proper masking and distancing.

As evidenced in the title, Overton’s exhibit taps into the artist’s playful side, which he feels is essential for all creatives to embrace.

“I think the trickster energy is something that an artist needs to have,” he said. “You have to be willing to take risks and have fun and make fun of things at times, and create magic at will.”