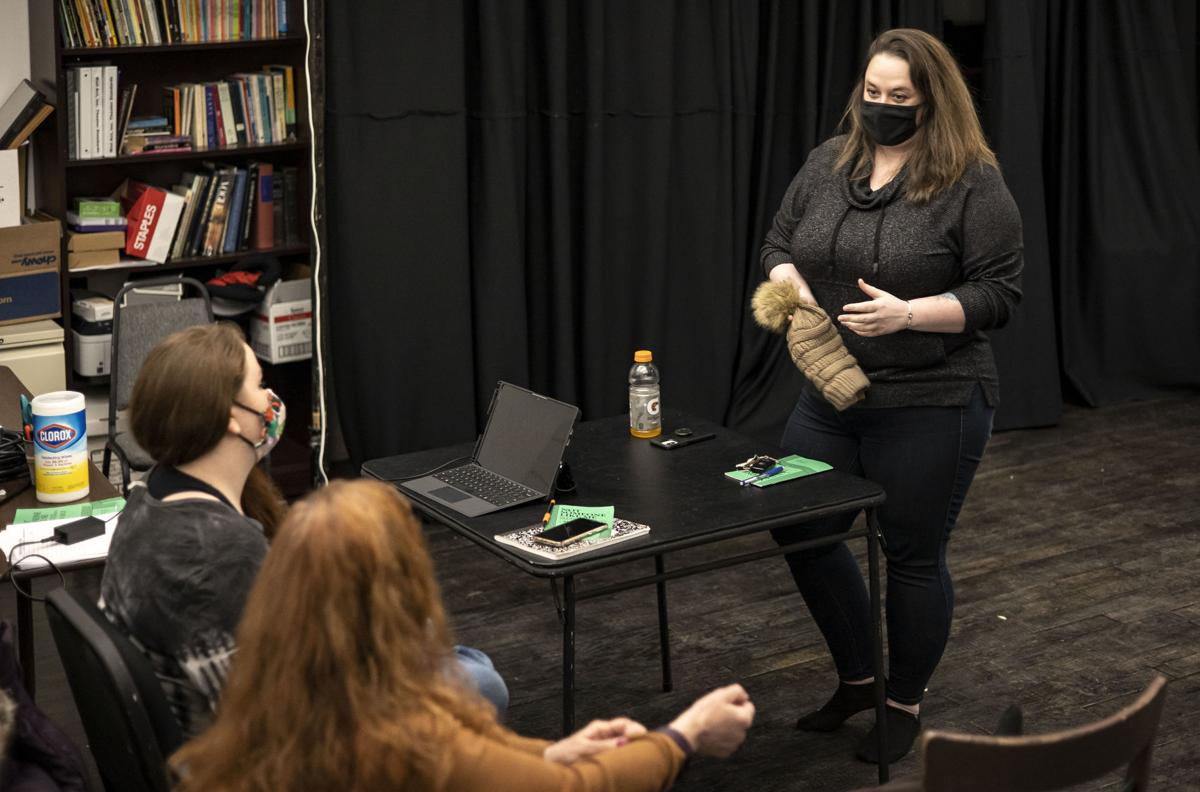 Karissa Dabel consults “Not Someone Like Me” directors Deborah Supowit and Lacey Lukas before rehearsing her monologue for the play on Thursday. 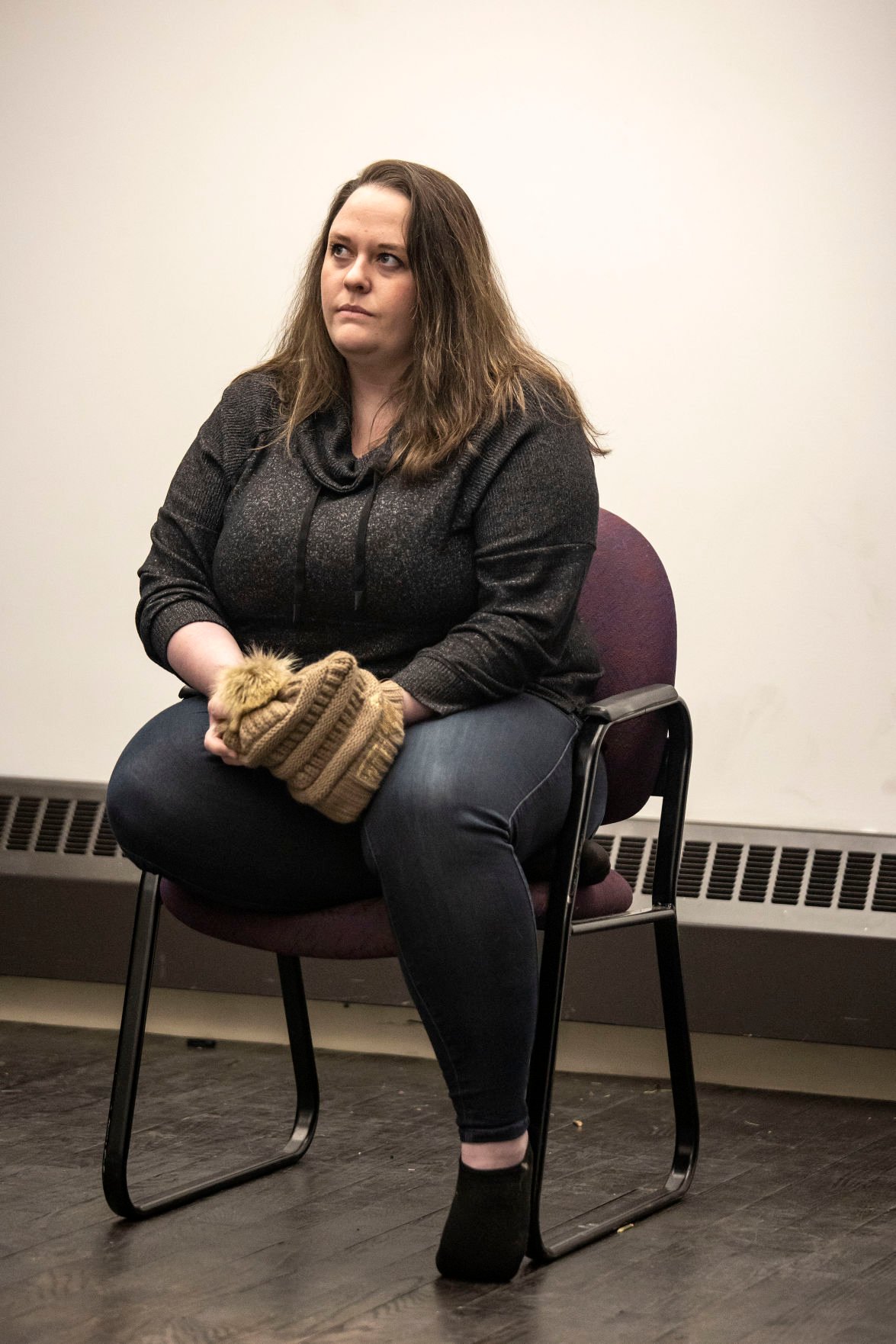 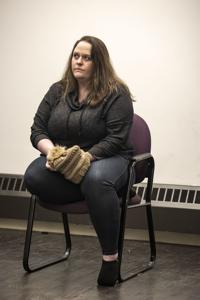 Karissa Dabel performs her monologue for the play “Not Someone Like Me” produced by Riot Act Inc., directed by Deborah Supowit and Lacey Lukas, at the Center for the Arts on Thursday. 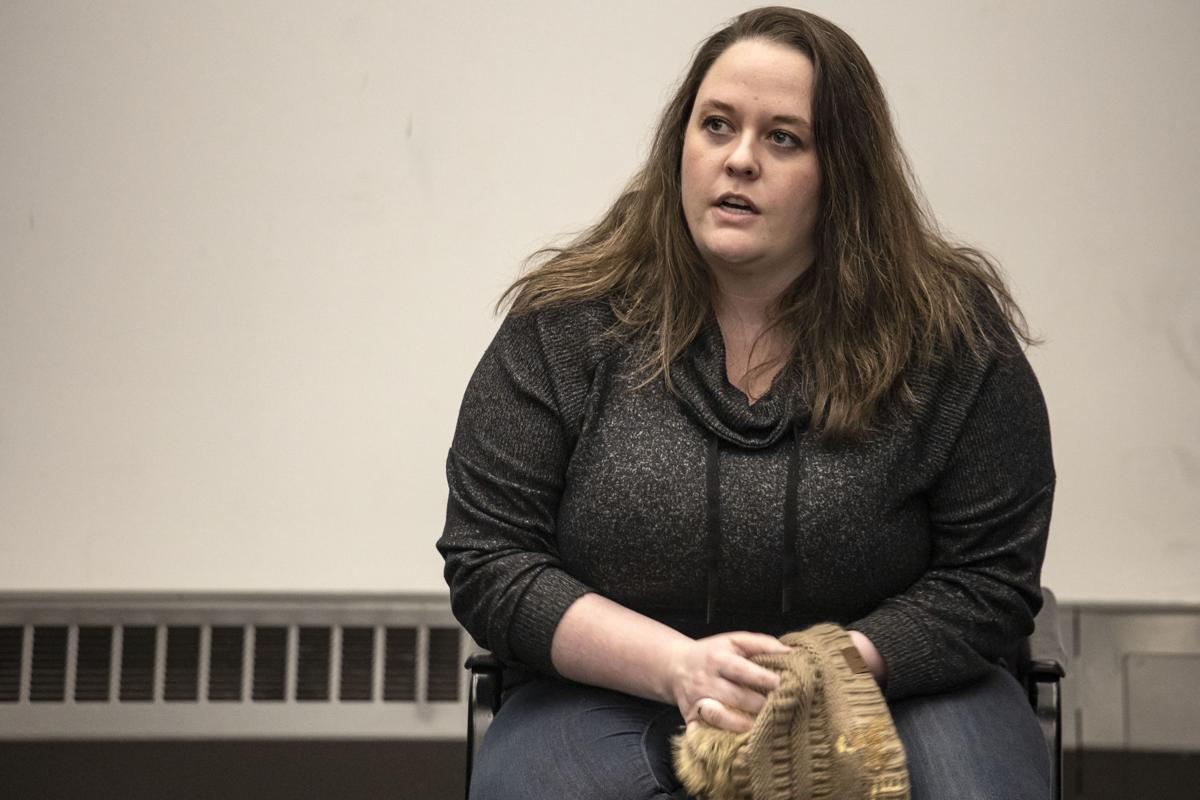 Karissa Dabel performs her monologue for the play “Not Someone Like Me” directed by Deborah Supowit and Lacey Lukas for Riot Act Inc. The play about five women’s sexual assault narratives opens Thursday at the Center for the Arts.

Karissa Dabel consults “Not Someone Like Me” directors Deborah Supowit and Lacey Lukas before rehearsing her monologue for the play on Thursday.

Karissa Dabel performs her monologue for the play “Not Someone Like Me” produced by Riot Act Inc., directed by Deborah Supowit and Lacey Lukas, at the Center for the Arts on Thursday.

Karissa Dabel performs her monologue for the play “Not Someone Like Me” directed by Deborah Supowit and Lacey Lukas for Riot Act Inc. The play about five women’s sexual assault narratives opens Thursday at the Center for the Arts.

Sexual-assault survivors seldom have the opportunity to tell their stories — to free themselves from that life-altering moment. Riot Act Inc., Jackson Hole’s community-driven theater company, stands to change that.

Riot Act will perform “Not Someone Like Me” by Susan Rice, a play chronicling five sexual assault stories, three times this weekend in its Center for the Arts studio.

“On television and in film, the experience of rape is often sensationalized, exploited and distant,” Riot Act states in press material. “Hearing these stories told by living, breathing women, in real time, has a vastly different effect. With each woman’s story, the play explores a common theme: Speaking out turns victims into survivors, if not heroes.”

“The way it’s staged is sort of like a support group in a person’s home,” said Macey Mott, Riot Act’s executive artistic director and a member of the “Not Someone Like Me” crew. “So the set is a living room, and everyone is telling their story to the other women in the group. But there’s some interaction between these ladies, so it won’t be like watching someone stand up and give a monologue.”

When Director Deborah Supowit saw the opportunity to helm this production, she pounced.

“I like to think of myself as a director who likes to get involved in the emotional needs of the cast,” the Riot Act veteran said, “so I felt I was a good fit.”

Immediately following each show, Riot Act will host a live talk-back session in conjunction with Community Safety Network, a valley nonprofit that advocates for and amplifies the voices of domestic violence and sexual assault survivors throughout the area.

“We generally try to keep our talk-back sessions very casual,” Mott said. “The audience can ask questions. If the audience doesn’t seem to be forthcoming, we can start a conversation. It’ll depend on who wants to do what.”

The Community Safety Network will be key to the talk-backs and will have an information table at the show, Mott said.

“One of the reasons we like to do shows with socially relevant material is because we like to give the actors and the audience members something to discuss,” Supowit said. “And we wanted to invite some experts to the show to add some sort of professionalism to it. It’ll be an opportunity for the audience to process what they’ve seen and heard and for actors to decompress after the show.”

The weekend’s performances will take place in compliance with state and local COVID-19 restrictions, with only 20 people in the live audience. Stage crew members will be required to wear masks and practice social distancing. Temperatures will be taken, and hand sanitizer will be distributed upon entry.

COVID-19 safety has been a priority from the get-go, Supowit said. The first month of rehearsals occurred solely on Zoom.

“They’re all monologues, so they don’t require much interaction between cast members, so it was easy enough to do it individually,” Supowit said. “The play was, in a way, well-built for this environment.”

Supowit and Mott know that women seldom have the opportunity to take ownership of their stories. They hope their production of “Not Someone Like Me” and the accompanying talk-backs will, at the very least, spark conversations about the prevention of sexual violence.

From the very beginning, Supowit and Mott’s goal has been to help the actresses bring these stories — the agony and the suffering — to life.

“Every story is horrific in its own way,” Supowit said, “and the actors put a lot of effort into conveying the women’s pain. The way that the women interpret the pain — the way they are committed to the material — is the most powerful part to watch.”

Find information about “Not Someone Like Me,” tickets to attend in person or to livestream a performance, or more about Riot Act, go to RiotActInc.org, or email info@riotactinc.org with questions. Learn more about the Community Safety Network at CSNJH.org.

Due to the show’s descriptions of sexual violence, parental guidance is suggested and viewer discretion is advised.  

$15 adults, $12 for seniors and students (viewer discretion advised), $10 to livestream