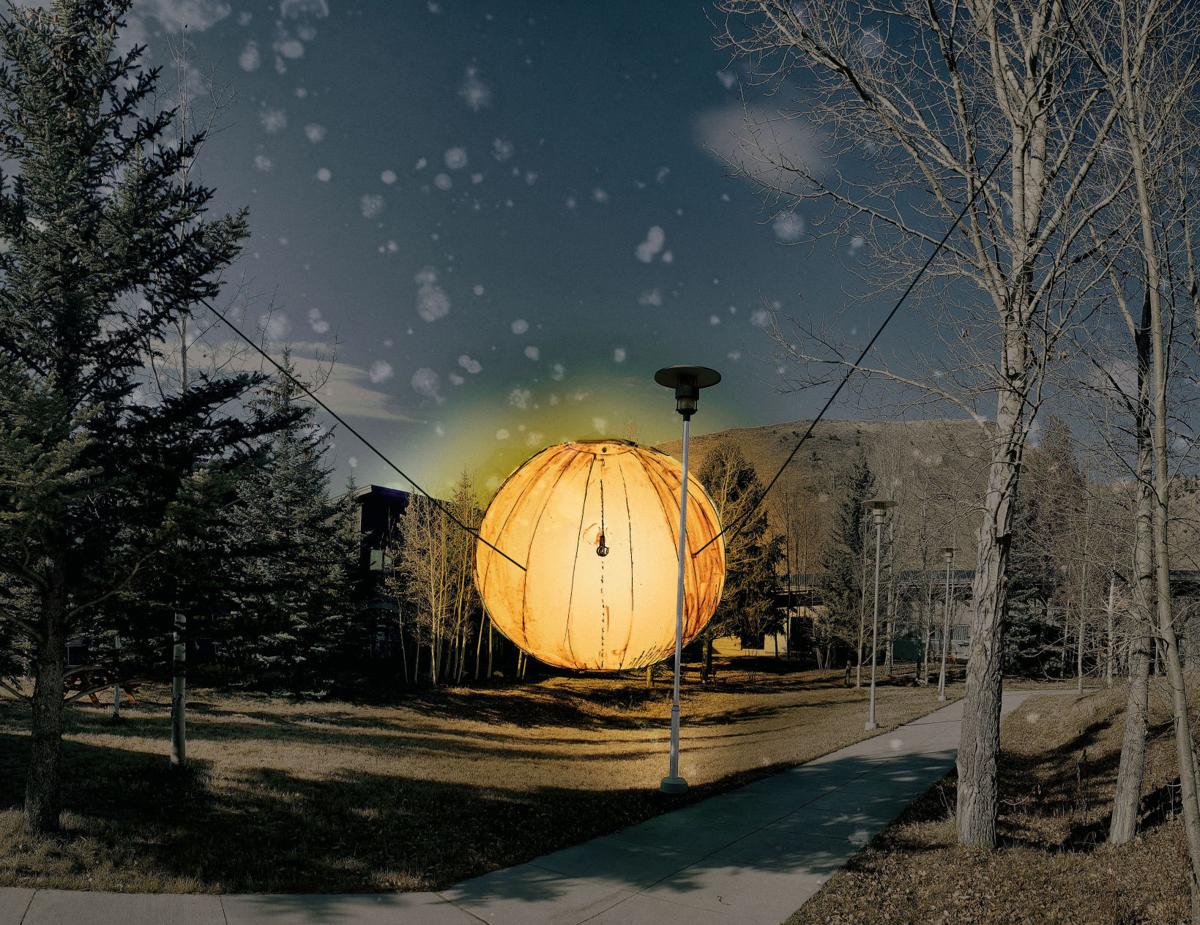 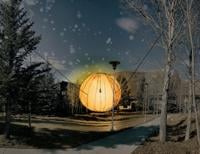 Bland Hoke’s 2020 GlowNights installation “The Sun,” seen here as a rendering, warmed up the Genevieve block last year. Jackson Hole Public Art has put out a call for proposals for this year’s GlowNights art projects. Applications are due Oct. 15. 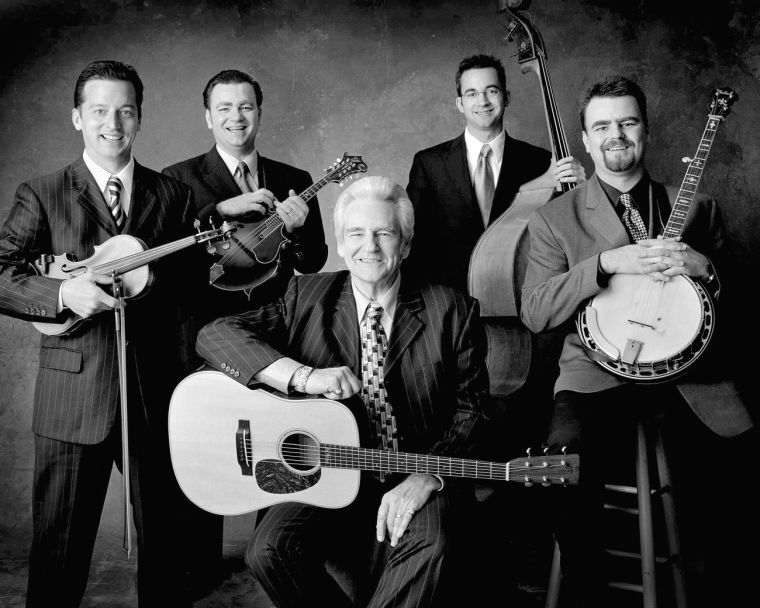 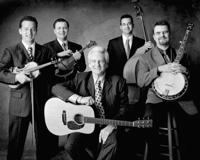 Del McCoury and his band, which includes his sons Ronnie on mandolin and Rob McCoury on banjo, is booked for the Wort Hotel’s Silver Dollar Showroom. Tickets, which will cost $150, go on sale Friday for the intimate and up-close Oct. 28 performance. 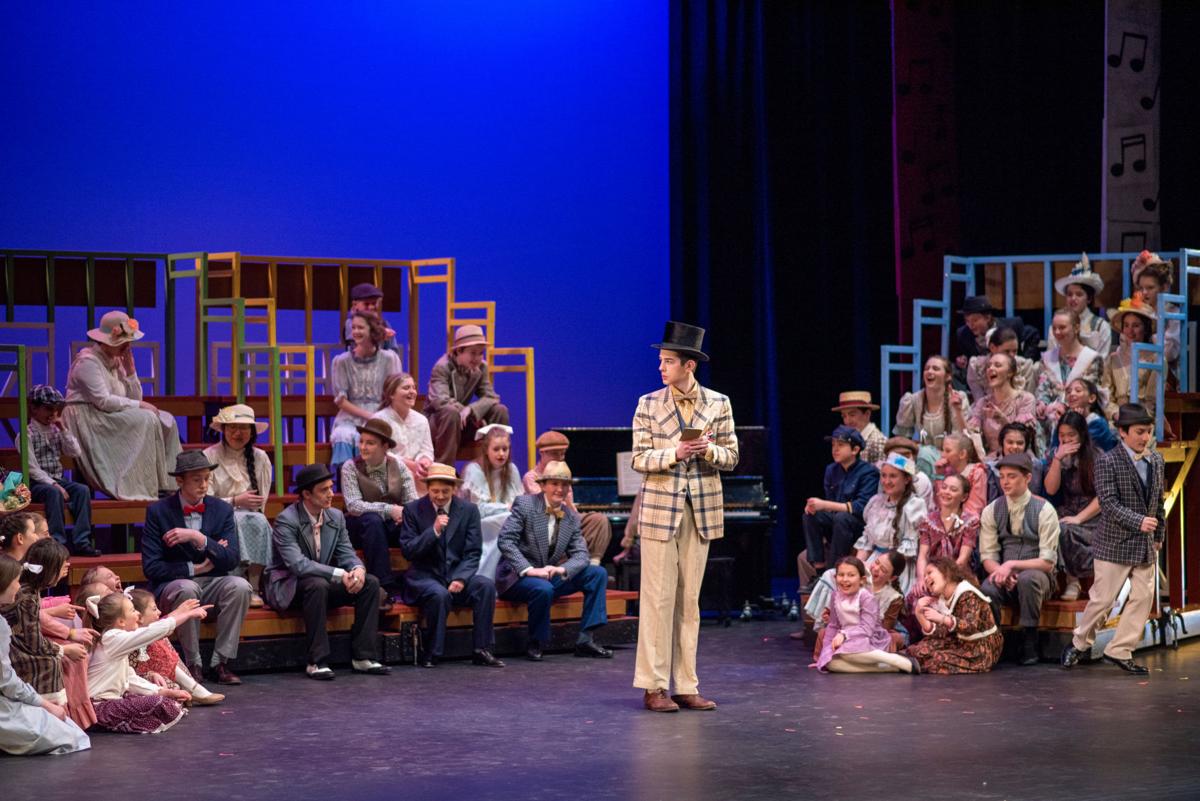 The entire cast of “The Music Man Jr.,” Off Square Theater Company’s 2020 Thieme Youth Musical, assembles on stage at the Center for the Arts for a show-stopping number. Auditions for the 2022 production, a youth adaptation of the Tony-winning Broadway hit “Matilda Jr.,” based on Roald Dahl’s story, will be held Saturday.

Bland Hoke’s 2020 GlowNights installation “The Sun,” seen here as a rendering, warmed up the Genevieve block last year. Jackson Hole Public Art has put out a call for proposals for this year’s GlowNights art projects. Applications are due Oct. 15.

Del McCoury and his band, which includes his sons Ronnie on mandolin and Rob McCoury on banjo, is booked for the Wort Hotel’s Silver Dollar Showroom. Tickets, which will cost $150, go on sale Friday for the intimate and up-close Oct. 28 performance.

The entire cast of “The Music Man Jr.,” Off Square Theater Company’s 2020 Thieme Youth Musical, assembles on stage at the Center for the Arts for a show-stopping number. Auditions for the 2022 production, a youth adaptation of the Tony-winning Broadway hit “Matilda Jr.,” based on Roald Dahl’s story, will be held Saturday.

Get ready to glow

GlowNights 2021 returns this December with a month-long exhibit of original, light-based installations in Teton Village and the town of Jackson.

Artists are invited to submit proposals for works that are inspired by the natural phenomena of the Greater Yellowstone Ecosystem and that employ light as a medium to attract people into public spaces at night.

JH Public Art is seeking proposals for three site-specific, temporary works to be located at the Center for the Arts, the Virginian Lodge and the Save-the-Block Greenspace, in downtown Jackson. Selected artists will be awarded $3,000 stipends. Proposals must be submitted by Oct. 15 and be able to be installed in early December.

GlowNights installations should be interesting and engaging during the day, but primarily focused on light and illumination at night. Conceptual, educational or representational artworks are welcomed.

Major funding for GlowNights is provided by the Teton Village Association and Jackson Hole Mountain Resort, with additional support from 4JH, The Virginian Lodge, Center for the Arts, Jackson Hole Land Trust, and the Wyoming Arts Council.

The full RFP can be found at JHPublicArt.org.

By now the whole world know about Lance Cpl. Rylee McCollum, the young Wyoming Marine killed by a terrorist explosion outside the Kabul Airport in the closing days of the United State’s nearly 20-year war in Afghanistan.

Cut down on Aug. 26, just 18 days later his wife, Gigi, gave birth to their daughter, Levi Rylee Rose McCollum. To raise funds for the widowed mother and fatherless daughter, Brooks Lake Lodge and Spa has organized an online silent auction, featuring luxury and outdoor experience donated by Wyoming businesses. The website also offers an easy way to make donations to the family, and assures 100% of all proceeds will go to Gigi and Levi.

The auction goes live Monday at CharityAuctionsToday.com/auctions/Silent-Auction-for-Rylee-McCollum-26789 and runs through Oct. 24. Up for grabs as getaways at the Wort Hotel and Brooks Lake Lodge, a private guided tour of Yellowstone National Park, whitewater and scenic trips on the Snake River, a bike park season pass from Jackson Hole Mountain Resort, and more.

Log on to the address above, complete the simple registration form on mobile or desktop devises, click items of interest and make an online bid. The current high bid will be shown for each item, and the high bidder will have the option to be notified if someone outbids them.

For info and answers to questions, call Brooks Lake Lodge at 307-455-2121 or email matthew@brookslake.com.

Off Square Theater Company’s Thieme Youth Musical is back.

The 2022 production will be “Matilda Jr.,” an adaptation of the Broadway Tony Award-winning hit based on Roald Dahl’s brilliant and revolutionary young heroine.

Auditions are set for Saturday at the Center for the Arts for all interested and budding actors in grades 3 through 12. There will be singing, dancing, costumes and plenty of good times, as always.

Go to OffSquare.org for more information and to register for an audition time slot.

The power of music enriches our lives in more ways than we can imagine. This summer, our On the Road program brought our musicians out of the concert hall and into our communities. These traveling ensembles reached more than 1,000 listeners at 20-plus events in outdoor parks, summer camps, living centers and museums.

The Saturday performances were live streamed and also recorded and videos, and now Bronfman’s and Josefowicz’s appearances will be shared even more widely as the festival and Wyoming PBS present and hourlong compilation program of season highlights.

Also on the program are works by Strauss and Tchaikovsky, and Julia Bullock performing Jessie Montgomery’s “Five Freedom Songs,” co-commissioned by the festival.

“Welcome Home: Grand Teton Music Festival 60th Season Highlights” will air at 8 p.m. Friday and 4 p.m. Sunday, and also will be available to stream anytime from the PBS app. Go to WyomingPBS.org for information.

Nine-time International Bluegrass Association Entertainer of the Year the Del McCoury Band is booked for a rare and intimate performance in the Wort Hotel’s Silver Dollar Showroom.

Tickets go on sale Friday for the Oct. 28 performance. Sold by the table, they will go for $150 a seat.

“To see Del and the Boys this up-close and person is a once-in-a-lifetime opportunity,” said Silver Dollar talent buyer Justin Smith. “We’re thrilled to bring them to town.”

In addition to perennial accolades from the IBMA, McCoury and his band have been nominated for 19 Grammy Awards and one twice, been inducted into the Grand Ole Opry and set the standard for traditional bluegrass in the world today.

Founding picker Del McCoury got started playing with none other than Bill Monroe himself, the so-called “Father of Bluegrass.” Over 27 years, his band has seen just one personnel change, while Del’s sons, Ronnie and Rob, have continued to carry on their dad’s tradition.

Despite their devotion to old-time music, the group has collaborated with the likes of Vince Gill, Dierks Bentley, Phish, Steve Earle and the Preservation Hall Jazz Band, and has performed in such unexpected settings as the Bonnoroo Music Festival.

Go to WortHotel.com for more information and to purchase tickets.

Library to cast a spell

But library staff have still baked up two take-home Potter experiences for youths age 8 to 17 and adults 18 and older.

Registration for youth Harry Potter take-home kits opened earlier this month and continues until Thursday, or when 80 applications are received.

Registration for adults starts Friday and is limited to just 10 applications, or will close on Oct. 21, whichever comes first.

“Harry Potter events are signature programs for us,” Beth Holmes, the library’s youth program coordinator, said in press materials, “but since gatherings are ill-advised during the current COVID situation, our team brainstormed these boxes, filled with surprises to make a magical night at home. We’re excited to be able to offer them to adults, who missed out last year.”

Kids and adults can register at TCLib.org/hogwarts. Boxes will be available to pick up 4-5 p.m. Oct. 23. Visit TCLib.org or call 733-2164 for information.

Winners of the 2121 High Plains Book Awards were named Saturday. Because of the coronavirus pandemic the usual awards banquet held in Billings, Montana, was canceled for the second year in a row, and winners were announced online and on social media.

A record 236 nominee — writers whose literary work reflects life in the High Plains or who reside in the region — resulted in winners in 13 categories. They are:

Nonfiction: “The Grizzly in the Driveway” by Rob Chaney, Montana, sponsored by the Billings Public Library Foundation.

Children’s Book: “On a Good Horse” by Darby Karchut, Colorado, sponsored by Susan and Robert Lubbers

Big Sky Award: “Shakespeare in Montana: Big Sky Country’s Love Affair with the World’s Most Famous Writer” by Gretchen E. Minton, Montana, this special prize was introduced two years ago for the overall best book by a Montana author.

The High Plains Book Awards were established to recognize regional authors and/or literary works that examine and reflect life on the High Plains including the states of Montana, North and South Dakota, Wyoming, Nebraska, Colorado and Kansas, and the Canadian provinces of Alberta, Manitoba and Saskatchewan. Each nominee is read by four community volunteers for a total of over 200 readers. The top three finalists in each category are then judged by previous winners or by writers who have significant connections to the High Plains region.

Nominations for the 2022 awards will be accepted starting in January 2022 HighPlainsBookAwards.org.