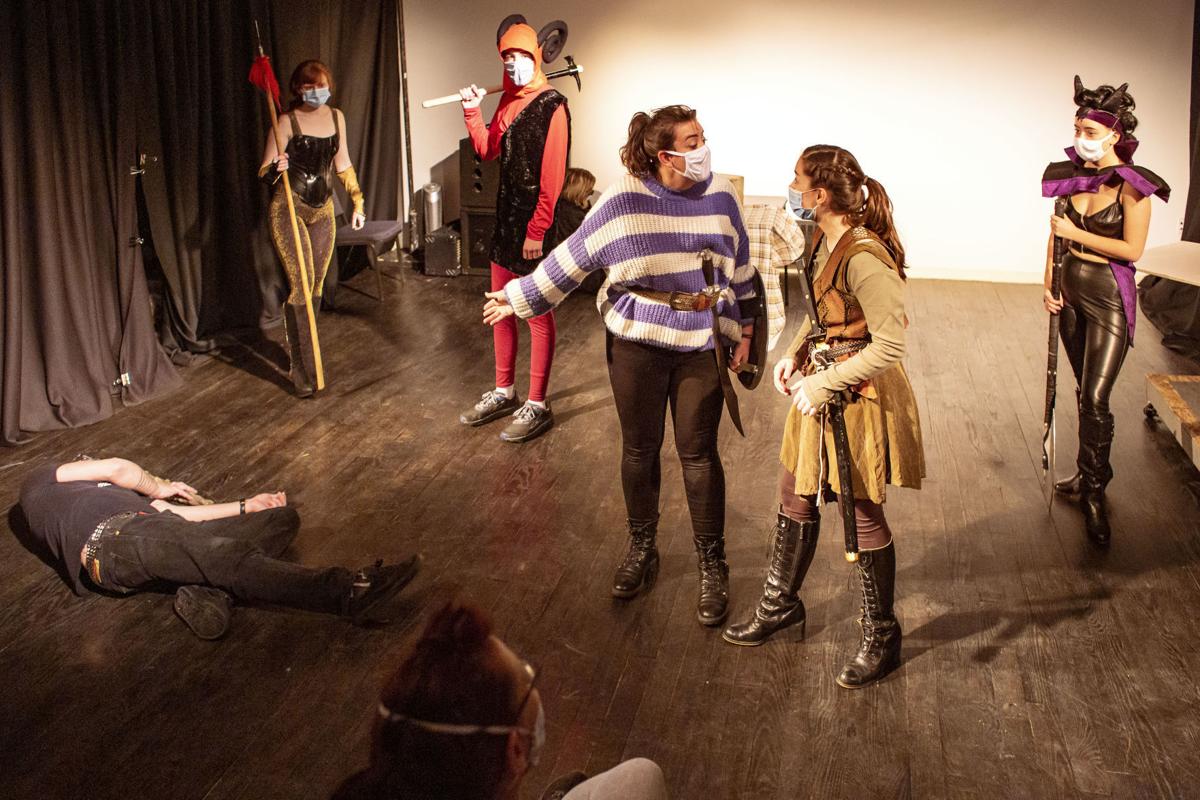 Riot Act Inc. actors rehearse their upcoming play, “She Kills Monsters” by Qui Nguyen, the first full-length production of their 18th season, as director Macey Mott watches at the Center for the Arts. 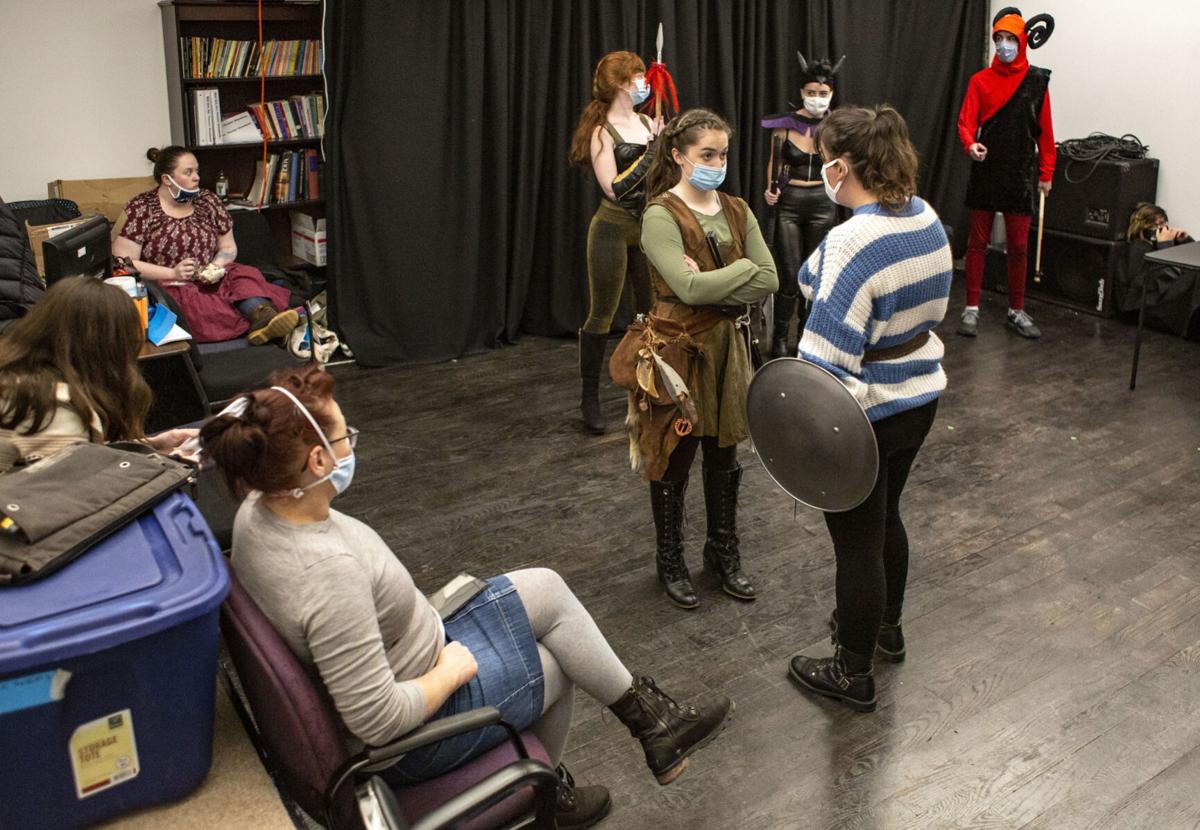 Riot Act Inc. actors rehearse their upcoming play, “She Kills Monsters,” by Qui Nguyen, the first full-length production of their 18th season, as director Macey Mott and intimacy/fight director Samantha Kaufman watch at the Center for the Arts. Due to COVID-19, a small live audience of 20 people or less will be admitted into the theater.

Riot Act Inc. actors rehearse their upcoming play, “She Kills Monsters” by Qui Nguyen, the first full-length production of their 18th season, as director Macey Mott watches at the Center for the Arts.

Riot Act Inc. actors rehearse their upcoming play, “She Kills Monsters,” by Qui Nguyen, the first full-length production of their 18th season, as director Macey Mott and intimacy/fight director Samantha Kaufman watch at the Center for the Arts. Due to COVID-19, a small live audience of 20 people or less will be admitted into the theater.

Elves, ogres, warrior women and flesh-eating gelatin molds will take the stage this week in the first full-length production of Riot Act’s 18th season: “She Kills Monsters,” by Qui Nguyen.

The play follows Agnes Evans (played by Angel Dillon), who is grieving the loss of her sister Tilly (Tatum Graham). Though the two sisters were never close, Agnes wants to learn more about Tilly and to properly grieve her.

When Agnes learns that Tilly was passionate about online fantasy gaming, and was particularly well-known in the world of Dungeons and Dragons, she embarks on a journey of her own, battling dragons and shape-shifting bosses to uncover further secrets about Tilly.

Director Macey Mott called it “a show that’s smart, that’s funny, that has a lot of action.”

The elves, demons and female protagonists wield an assortment of weapons — from swords to battle axes to warhammers — which makes for dynamic fight scenes.

“It’s really entertaining to watch, and it’s visually very exciting to be a part of,” said Samantha Kaufman, fight and intimacy director for the production. “It has these really beautiful undercurrents of some pretty heavy questions and topics.”

Kaufman and Mott think the difficulties depicted in the show will resonate with viewers.

“I hope that it’s not just fluff for the audience,” Mott said, “that [audiences] walk away maybe thinking about and talking about the topics of the play. For example, there’s grief and dealing with LGBTQ stuff and other issues — it’s almost like a metaphor for the real world.”

Auditions for “She Kills Monsters” wrapped up at the end of September. Based on the turnout, Mott said, “It was obvious that people were hungry to have theater back in their lives,” especially after Riot Act’s spring show was cancelled.

“I think one of the biggest things that I’m excited about is just having live theater back on the stage, especially in the age of COVID,” said Karissa Dabel, who is on Riot Act’s board of directors, narrates the show and plays two characters. “This adventure is really about, to me, the importance of connecting with family as much as you can with the time that you have, because you never know when it’s gonna end. I hope the biggest takeaway people get from this is just remembering to slow down and take time with the people that they love, family or friends.”

Riot Act chose “She Kills Monsters” before the pandemic began, but the parallels between Agnes’s grief and the uncertainty of the pandemic are apparent.

“She didn’t take the time to get to know her sister while she was still alive,” Dabel said of Agnes, “and now she has to deal with the repercussions of that and grasping onto anything that she can get. I hope that storytelling kind of triggers that response from the audience to just slow down a little bit, especially when we’re dealing with pandemic and people don’t know what could happen.”

Despite the serious topic, Mott and other Riot Act members think the fun aspects of “She Kills Monsters” will bring relief. Taunting, sass and wit are plentiful between Agnes and Tilly, perhaps reminding viewers of their own sibling dynamics.

“People are in a place,” Kaufman said, “where we just want to be entertained in a way that will let us be removed from the current rise and the struggles we’re having in the pandemic.”

“I’m trying to keep it as a surprise for myself, so I haven’t read any other parts except my own just so when we do record it, I can watch it as the actual person,” said Cody Boyce aka Aurora Queen of the Night, who plays Evil Gabbi and Farrah the Fairy. “But I think they’re going to find it very funny.”

While actors will be maskless for their performances, crew members will wear masks and take other safety precautions.

The live audience will be kept to no more than 20 people, who will be expected to wear masks and use hand sanitizer before the show. The crew will take temperatures of audience members and arrange seating to promote social distancing.

Tickets can be purchased online at RiotActInc.org or at the door. The cost is $20 for adults and $15 for students and seniors. A live stream is also available to watch at home for $12.