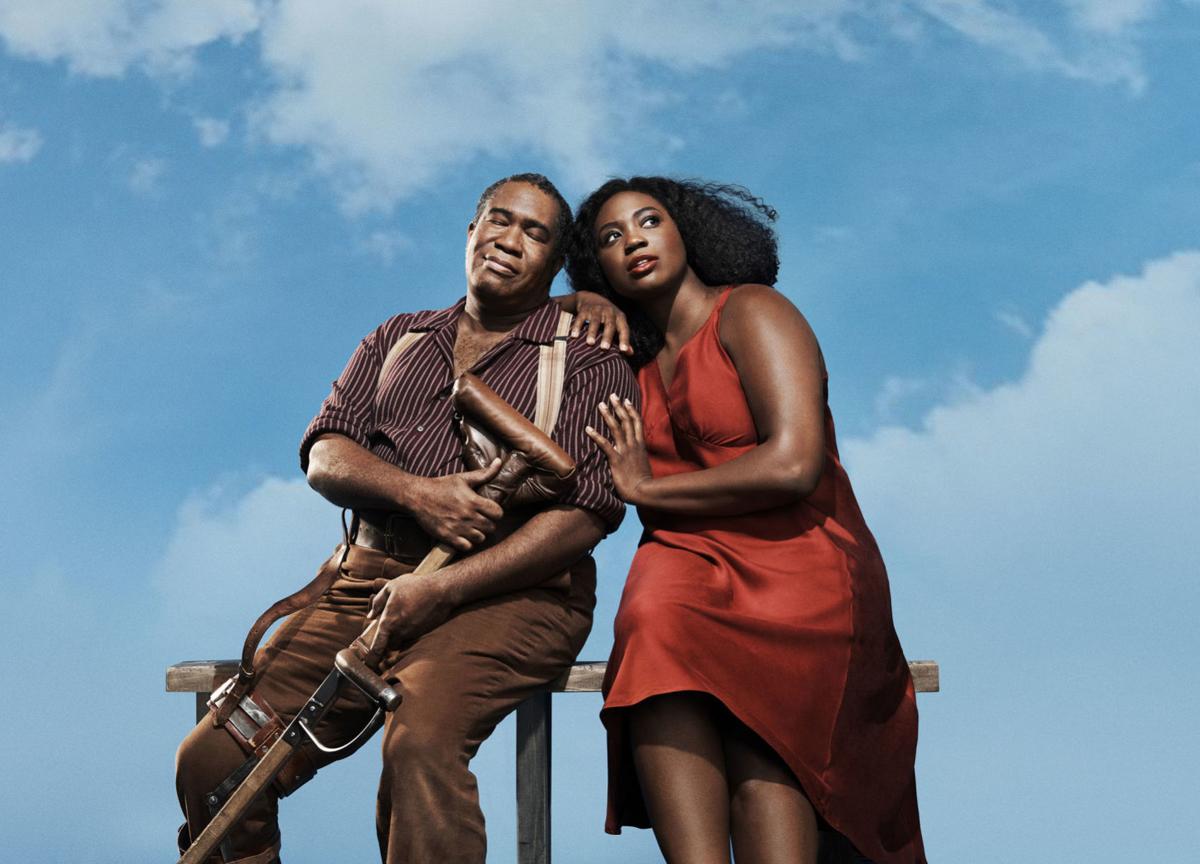 Eric Owens plays Porgy and Angel Blue is Bess in the Metropolitan Opera’s latest iteration of the Gershwins’ “Porgy and Bess.” It will be shown Thursday evening at the Jackson Twin Cinema as part of the “The Met: Live in HD” series. 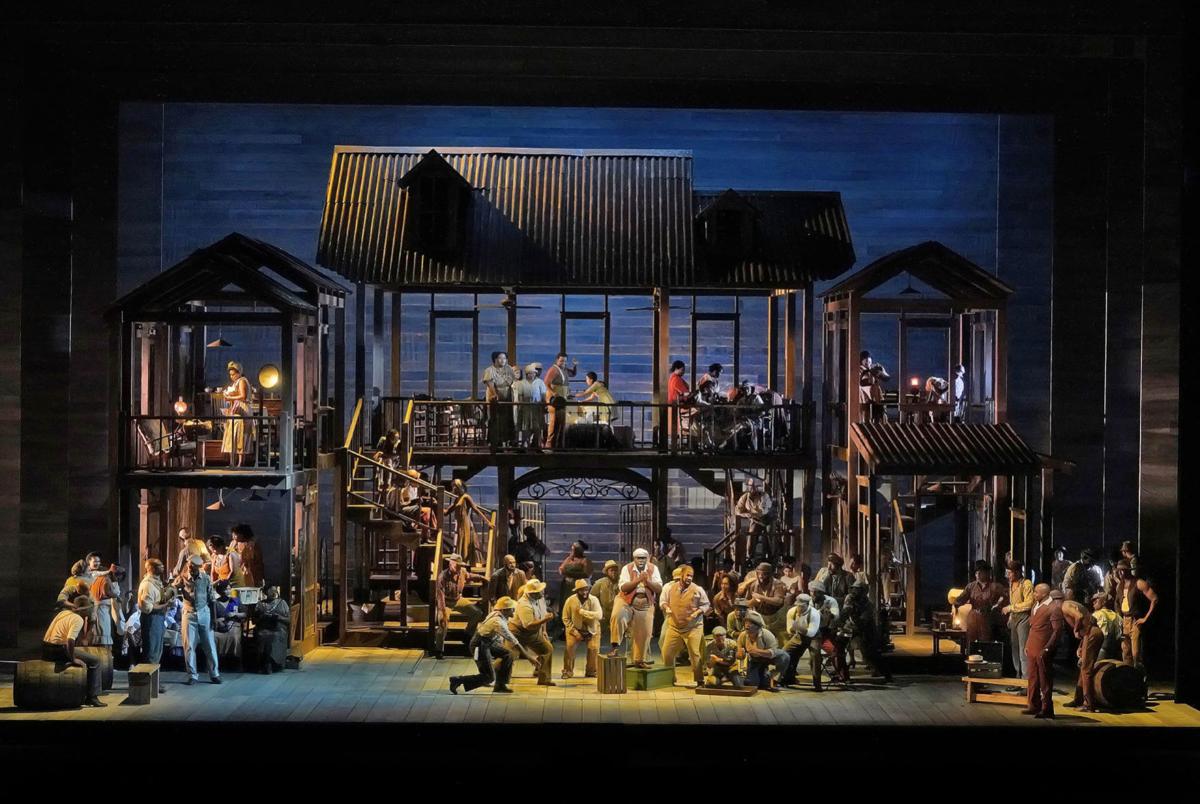 The full ensemble from the Met’s “Porgy and Bess” fills the stage. The opera is set in Catfish Row, a fictitious tenement on the waterfront of South Carolina. 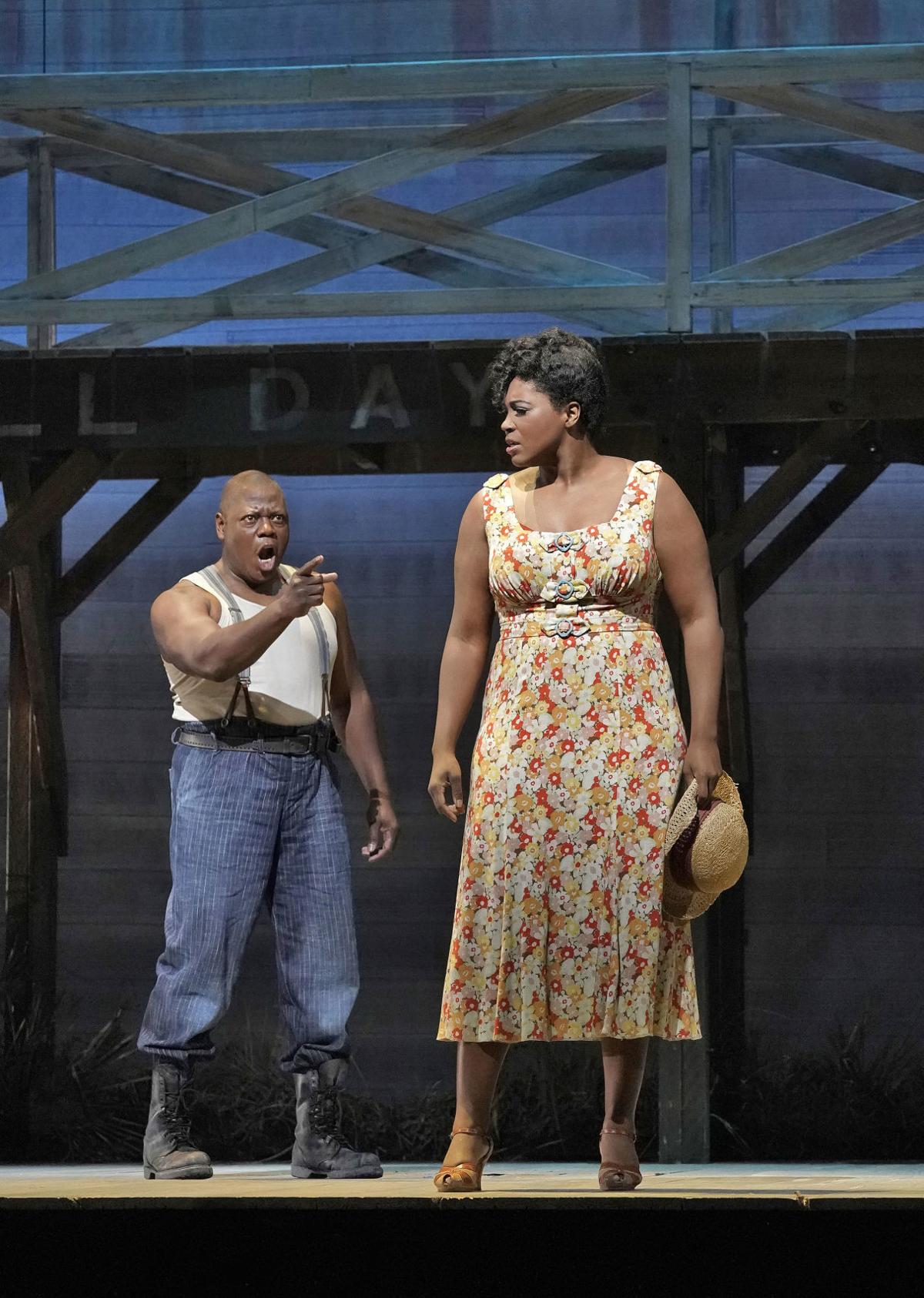 Eric Owens plays Porgy and Angel Blue is Bess in the Metropolitan Opera’s latest iteration of the Gershwins’ “Porgy and Bess.” It will be shown Thursday evening at the Jackson Twin Cinema as part of the “The Met: Live in HD” series.

The full ensemble from the Met’s “Porgy and Bess” fills the stage. The opera is set in Catfish Row, a fictitious tenement on the waterfront of South Carolina.

From its very first production in 1935, George and Ira Gershwin’s opera “Porgy and Bess” has undergone a multitude of cuts, edits, abridgments and subtractions — bits taken out to shorten its run time, fragments stitched back in, though not always in their original form or their original place. Add to that the fact that the brothers prepared several different versions — there was an initial piano-vocal score, and George arranged an orchestral concert suite — and that George died before the final orchestral score was published, and what companies have had to work with over the ensuing decades was essentially an incomplete work.

But for the past several years a team at the University of Michigan has been working on the definitive edition. Wayne Shirley, Andrew Kohler and a squad of other musicologists have pored over the various versions of the scores, original manuscripts, notes by the managers of the first production, some early recordings and much more to compile the first critical edition of “Porgy and Bess.”

The Metropolitan Opera used that scholarly and authoritative work in its new production of what many consider the first great American opera, and included it in this season’s “Live in HD” series, making it available to hundreds of communities around the world. That includes Jackson Hole, where the Grand Teton Music Festival presents the series.

The poignant, achingly beautiful, heartbreaking but hopeful tale of Porgy, a disabled but proud beggar, Bess, the woman he loves who is in an abusive relationship with another man, and all the other poor fisher folk and laborers who inhabit Catfish Row, an African-American tenement in Charleston, South Carolina, screens at 7 p.m. Thursday at Jackson Hole Twin Cinema. Met stalwart Eric Owens and the radiant Angel Blue star in the title roles, with Golda Schultz as Clara, Latonia Moore as Sereana, Frederick Ballentine as Sportin’ Life and Alfred Walker as Bess’ cruel man Crown.

The story of “Porgy and Bess” starts in the early 1920s, when the Charleston writer DuBose Heyward read a newspaper story about a local beggar, well known to the community, who murdered his wife.

“Heyward thought, ‘My god, this is a person,’” said Shirley, a musicologist and music librarian with the Library of Congress and the chief editor of the new edition. “He thought he was just part of the scenery, but he had a life.”

This revelation led to DuBose’s short novel “Porgy,” in which the title character doesn’t kill his wife but kills the rival for the woman he loves. A couple of years later Heyward’s playwright wife, Dorothy, turned “Porgy” into a play that enjoyed a lengthy run in New York.

Gershwin read DuBose Heyward’s novel and no doubt saw Dorothy Heyward’s play, and in the early ’30s — having already made his mark on American music with the large-scale orchestral works “Rhapsody in Blue” (1924) and “An American in Paris” (1928) and with scores of popular songs that live on as much-covered standards in the Great American Songbook — he proposed a collaboration with the couple to turn the story into an opera. DuBose Heyward would write the libretto, Ira Gershwin would write the lyrics, and George Gershwin would write the music.

And what music. Many of the arias and duets in “Porgy and Bess” are nearly universally known thanks to countless jazz and rock interpretations (most notably, Ella Fitzgerald and Louis Armstrong, Miles Davis, Oscar Peterson, Janis Joplin, Sting). There’s the lullaby “Summertime,” the sassy “It Ain’t Necessarily So,” the happy-go-lucky “I Got Plenty o’ Nuttin’.” Then there’s “My Man’s Gone Now,” which Shirley called “the greatest tragic aria written after World War II,” and “Bess, You Is My Woman Now,” which he said was the greatest duet since “Madama Butterfly.”

But there is more music to “Porgy and Bess” than the famous songs — a lot more. In fact, when the opera opened on Broadway, on Oct. 10, 1935, its three acts ran four hours long. Subsequent productions saw cuts of various degrees of travesty — Gershwin himself fiddled with it until his death in 1937 — the result of which was the muddle of adaptations and abridgments that led the Gershwin family to launch The Gershwin Initiative with the University of Michigan, with Shirley leading the effort to edit this first definitive edition.

Gershwin made the bold move of using an all-black cast for his first production, with Todd Duncan as Porgy, Anna Brown as Bess (George Gershwin actually developed the character around Brown), vaudevillian John W. Bubbles as the village dealer of “happy dust,” or cocaine, and choral director Eva Jessye leading her own highly regarded African-American choir.

“Porgy and Bess” enjoyed a run of more than 130 performances — pretty good for opera, but a bust for Broadway — and for decades after, it ran into trouble and controversy as some accused it of cultural misappropriation and playing on negative stereotypes. There were some unfortunate versions of it: Al Jolson wanted to do a more upbeat version of it in blackface; European productions in the 1940s had all- or mostly all-white casts; and a 1959 movie directed by Otto Preminger was not greeted well by the Gershwin estate nor many critics.

Gradually, however, as Gershwin came to be acknowledged as one of America’s top composers, the stigma has faded. In 1976 the Houston Grand Opera became the first American opera house to put on “Porgy and Bess.” England’s prestigious Glyndebourne Festival followed, and throughout the ’90s and ’00s it got picked up by companies from Cape Town, South Africa, to Berlin. A 2012 production at the Richard Rodgers Theatre on Broadway starred Audra McDonald, Norm Lewis and David Alan Grier.

The fact that the Metropolitan Opera has included “Porgy and Bess” in its 2019-20 season — the first time in nearly 30 years — is the latest indication of the work’s return to grace, if not its apotheosis. And, Shirley noted, it’s a highly worthy production.