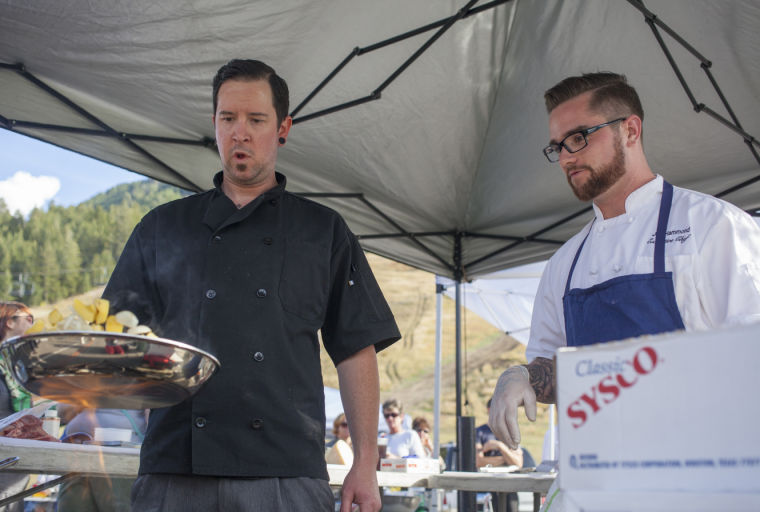 Rich Hammons of Sudachi and Joel Hammond of Lost Creek Ranch and Four Seasons Handle Bar make a puree during the fourth annual People’s Market Iron Chef Competition at the base of Snow King Mountain. Chefs were given 70 minutes to create a dish showcasing three mystery ingredients. 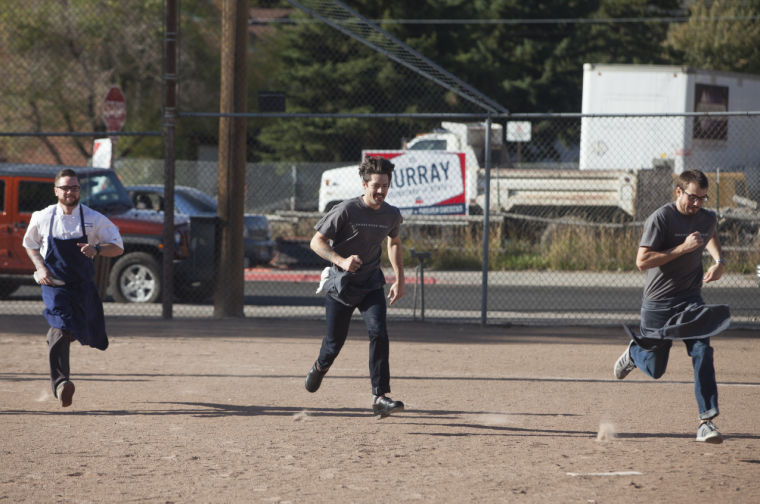 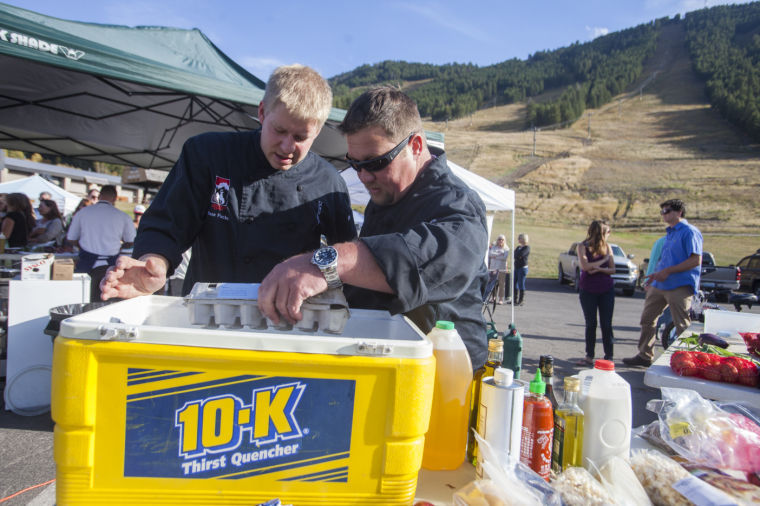 Nate Fischer and David Smith, of Jackson Hole Mountain Resort’s Couloir restaurant, strategize on which ingredients to use. All contestants had to use three “mystery” ingredients announced immediately before the start of the competition.

Rich Hammons of Sudachi and Joel Hammond of Lost Creek Ranch and Four Seasons Handle Bar make a puree during the fourth annual People’s Market Iron Chef Competition at the base of Snow King Mountain. Chefs were given 70 minutes to create a dish showcasing three mystery ingredients.

Nate Fischer and David Smith, of Jackson Hole Mountain Resort’s Couloir restaurant, strategize on which ingredients to use. All contestants had to use three “mystery” ingredients announced immediately before the start of the competition.

Dave “Nubz” Smith spread his misshapen chef’s fingers across a ball of dough, diligently worked the tacky mass of herbs and flour into pasta. After years of working in kitchens, he was missing some of the tips of his fingers.

At his side, a loaf of fattened duck liver dropped into a food processor while a pan fried more foie gras. On a grill behind him, two fat local porterhouses were being charred.

Chefs from Snake River Grill, Couloir and Sudachi squared off Sept. 17 for the fourth annual People’s Market Iron Chef Competition for a chance to take home the dueling knife trophy and a year’s worth of bragging rights.

As in Food Network’s “Iron Chef” competition, participants were given one hour to cook a gourmet meal with a set of secret ingredients that were revealed at the beginning of the contest. A panel of local foodies then judged the meals based on flavor, presentation and use of local ingredients. Extra points were given for beer pairings.

As part of the People’s Market, the event showcased and promoted the use of local ingredients, Slow Foods in the Tetons President Audrey Smith said, especially since many Jackson Hole restaurants source locally.

“What we do is promote the celebration of food as the cornerstone of culture,” she said. “It’s a fun way to represent the whole community, from farm to fork.”

Kyle Nicholson, chef du cuisine of Snake River Grill, and Brian Laughlin, the sous chef, weren’t worried about the surprise ingredients. They had their secret weapon, dried Mexican poblano pasilla de Oaxaca, tucked into their station behind burners, pots and the trophy they took from the Couloir team last year with a grilled Lockhart Ranch skirt steak on a potato latke.

Twenty feet away, Smith, Couloir’s line cook, and Nate Fischer, the restaurant’s sous chef, were poised to take back their title with their versatile secret weapon, a loaf of foie gras, even if they were willing to share kosher salt with their biggest competitors.

Between their two tables, newcomers to the competition planned their attack, not looking up, not wasting any time. Sudachi’s Rich Hammons, armed with edible flowers, micro greens and knowledge, was ready to take the competition.

It began at 5 p.m. All the chefs walked away from their stations and lined up behind home plate of the Snow King ball field. “Crazy Tom” Haigh was on the microphone, and when the clock started ticking away, he yelled out the secret ingredients, giving the chefs the length of the ballpark to brainstorm their dishes.

Snake River and Sudachi took off in a sprint, poised to scoop up the freshest ingredients. The Couloir team walked leisurely, talking about their meals.

As soon as they all reached their stations, the coordinated pyrotechnics began. Burners were lit, food processors whirred to life and the flambeing began.

Salt and seasonings flew over the steak at the Snake River station, and then the meat was thrown into a sous-vide bag. A bag of popcorn was torn open to be ground and used as breading.

Sudachi also had the sous-vide whirling, but the chefs cubed the meat and seasoned it with pumpkin seed oil. On the burners, diced apple, squash and onion were thrown into a pan of oil, but Hammons had to poke the scalding produce with his bare finger to make sure it was properly coated in hot oil.

These moments were why the crowd gathered.

“I love watching ‘Iron Chef’ on Food Network,” said Michelle Leonard, of Jackson. “I couldn’t get any closer unless I was the food.”

Couloir’s steaks were going on the grill in the background, forgotten and burnt almost to coal, but the team caught a break when generator power gave out 10 minutes into the competition, and each team had to restructure.

“A curveball,” Laughlin shouted, “I love it!”

The competition continued with oil splashing and meat sizzling for the next hour. The chefs were given an extra 10 minutes because of the outage, and when Crazy Tom called for the teams to move away from their plates, culinary artwork awaited the judges.

Nicholson started getting upset. His pasilla de Oaxaca ice cream was turning into a creamy red mush as the judges figured out which local beer paired with which plate.

It did not seem to matter to the three people who dug straight into their plates as they bought them in a post-contest auction that benefits People’s Market and offsets the cost of the competition.

A man from Dallas was all too pleased to fork over $80 for his meal from Snake River Grill, as was the valley resident who paid $60 for her plate from the Couloir and the women who dished out $90 to enjoy a Sudachi treat.

“Ours is the best,” one winner said, but the other auction winners echoed her sentiment. For the most part, they were right.

Torn between sous-vide and pan-roasted T-bone with deep-fried eggplant chip, squash ravioli in lemon brown butter with glazed carrots and grilled strip, and a sous-vided steak with acorn squash and apple/thyme puree, the judges could hardly decide. It took them more than an hour of deliberation. Do we mark off for the Mexican pepper? Can you believe they fried foie gras? They redeemed themselves with that side! The judges were nearly stuck.

“I think it’s the closest competition we’ve seen,” Fenn said, “because each dish has something brilliant and unique about it.”

In the end it was the beer pairings that decided the winner. The best matches received the most bonus points, and Sudachi unanimously cleaned up that category, earning the trophy and the right to call themselves Jackson Hole’s homegrown Iron Chefs.