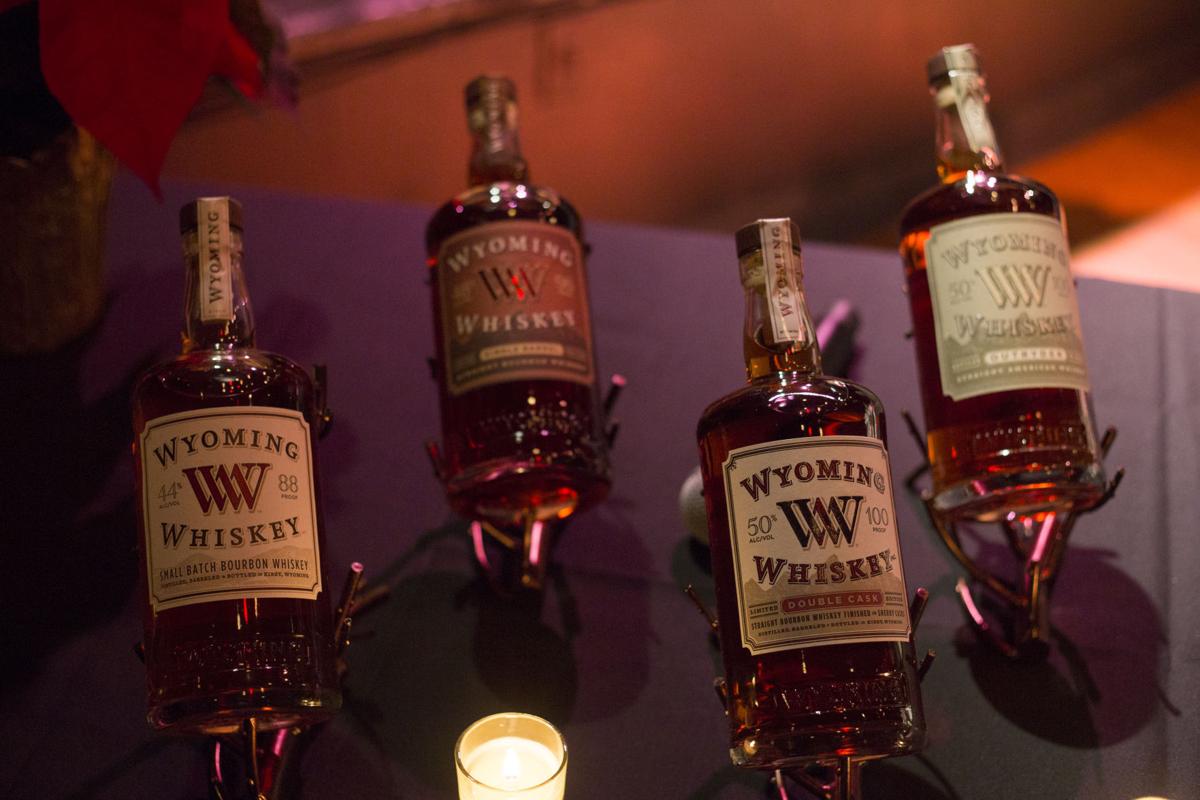 Wyoming Whiskey is displayed at the Bartender Shootout on Friday evening. The event coincided with the fifth anniversary of the state-branded whiskey. The whiskey is distilled in Kirby, north of Thermopolis. 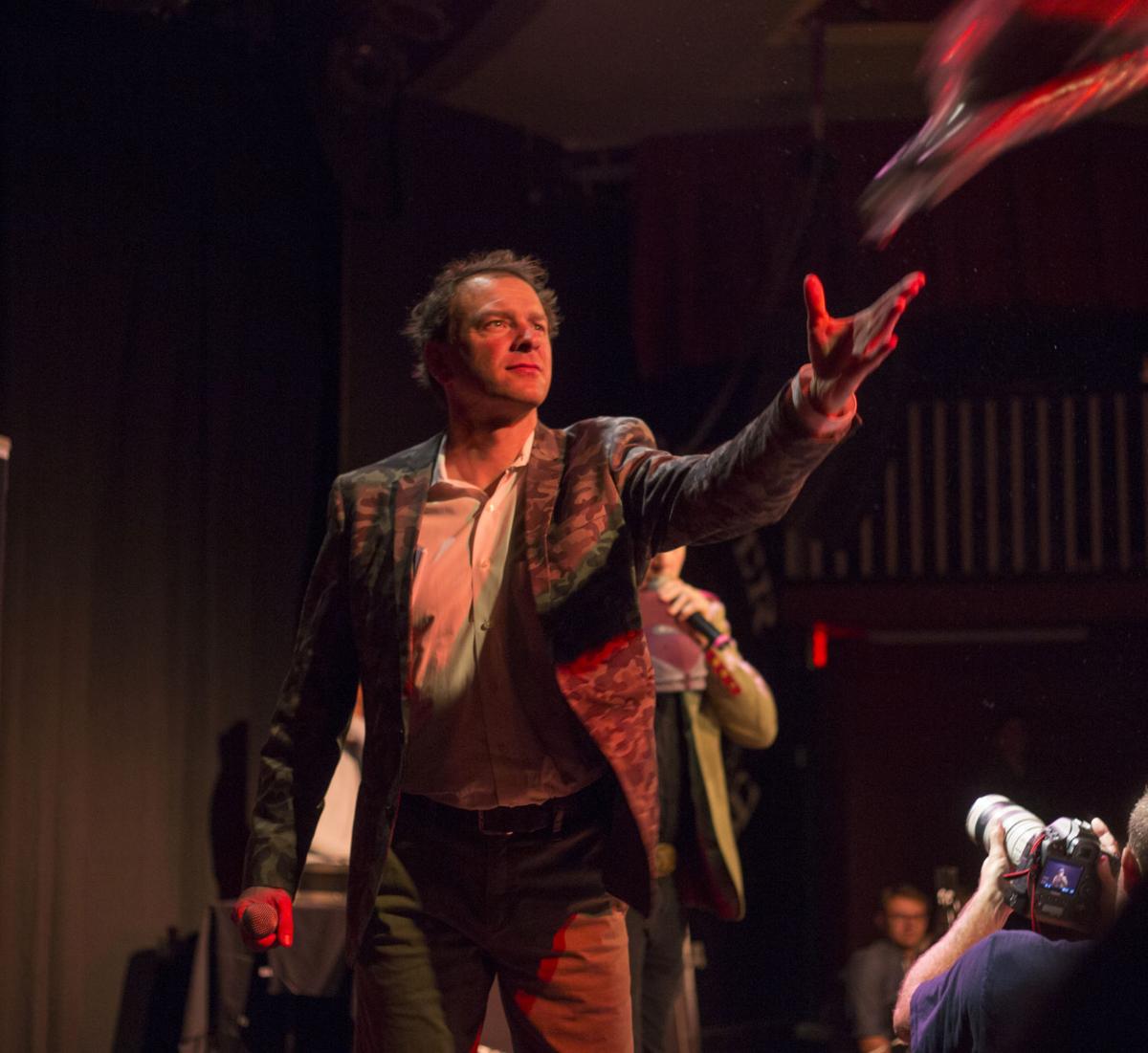 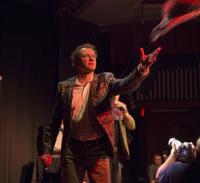 David DeFazio throws a T-shirt to the crowd during the Bartender Shootout finals at the Pink Garter Theatre.

Wyoming Whiskey is displayed at the Bartender Shootout on Friday evening. The event coincided with the fifth anniversary of the state-branded whiskey. The whiskey is distilled in Kirby, north of Thermopolis.

David DeFazio throws a T-shirt to the crowd during the Bartender Shootout finals at the Pink Garter Theatre.

Trays of Wyoming Whiskey passed around the Pink Garter Theatre and people gathered in the middle of the room.

“Everyone grab a shot and get in the picture,” David DeFazio said.

Not only was DeFazio, and the crowd, celebrating the annual Wyoming Whiskey Bartender Shootout competition, it was also the fifth anniversary of the first release of the spirit.

DeFazio, a co-owner, started the distillery on July 4, 2009. The owners, who include Brad and Kate Mead, live in Jackson Hole, but the distillery is in Kirby, 12 miles north of Thermopolis.

Like when the first glass bottle was manufactured in Mexico City in early 2012. A ceremony was held in the factory as the first bottle came off the production line

“All the employees gathered around to watch the first bottle come off the line,” he said. “They show it to you. And the second bottle that comes off the line, they pick it up with these tongs, and it’s very hot, and they squeeze it in front of you — they ruin it.”

Not until later did DeFazio understand the significance: That was the first and last bottle that would ever not be perfect.

“I actually got a little emotional,” he said. “It was the first thing that we made that was ours.”

And then there was the first mash when DeFazio scooped up the porridge-like sweet grains.

“I went over there with a cup and I dipped it under the spout, I grabbed a spoon, walked out front and ate all of it,” he said.

It wasn’t easy to eat, he said, but it was an amazing moment. He helped make that; it wasn’t just a building in Kirby.

“I kept waiting for moments where there was a tangible element: a thing you can eat, touch, look at,” he said. At the beginning, when you build a distillery, “there’s nothing to grab to say, ‘That’s what we’re making.’”

The population of Kirby grew overnight from 92 people to almost 4,000. Cars parked in fields and a bus shuttled people in from Thermopolis. People from all over the state convened in the middle to celebrate the release of the distillery’s first product, Wyoming Whiskey Small Batch.

“I remember stepping out of the tent and looking down the road,” DeFazio said. “It was just an endless line of cars extending out of Kirby and heading down the highway.

“There have been very few moments that were that exciting as that day,” he said.

Since then the company has grown. It’s gone from one product to a lineup of six, and each step of the whiskey-making process has been refined, from the grain selection to fermentation, distillation, barreling and batching.

Steve Nally, a bourbon maker from Kentucky, was brought on originally to teach the Wyomingites the way of whiskey.

“No one had made whiskey in Wyoming before, legally,” he said with a laugh.

Nally showed the ropes to Sam Mead, the current distiller.

“Sam took everything that Steve had laid down as a foundation and has done an incredible job of refining all the processes to the point where our product now is something we’ll put up against any bourbon on the shelf and know that we’ll hold our own and probably do better than most brands out there,” DeFazio said.

In 2012 a batch was made by selecting 15 barrels from different parts of the room and blending them. Each barrel tastes slightly different, depending on the type of wood in the barrel and where it’s located in the distillery.

Whiskey specialist and master blender Nancy Fraley visits the distillery four times a year to marry the barrels. Forty barrels are blended based on their notes and flavor, rather than being randomly selected.

There are also new products including the Outryder, an American whiskey with 35 percent rye content. The distillery creates a custom Private Stock product for retailers and the Double Cask, which is aged in sherry casks. Then there’s the best of the best, the annual release of the Single Barrel, and the rare release of the Barrel Strength Bourbon.

“Imagine one of the Single Barrels that’s just one step above,” DeFazio said of the Barrel Strength. “It’s an anomaly. Something happened in that barrel to just be exceptionally smooth, rich.”

Wyoming Whiskey has made its way out of its homeland and into over 30 states across the nation. DeFazio doesn’t expect that number to grow tremendously in the next few years, but he does envision the distillery working at being even more successful in the already established markets.

For now they’re going to keep doing what they do best: make whiskey.

“We like to think we’re the whiskey of the West,” he said.