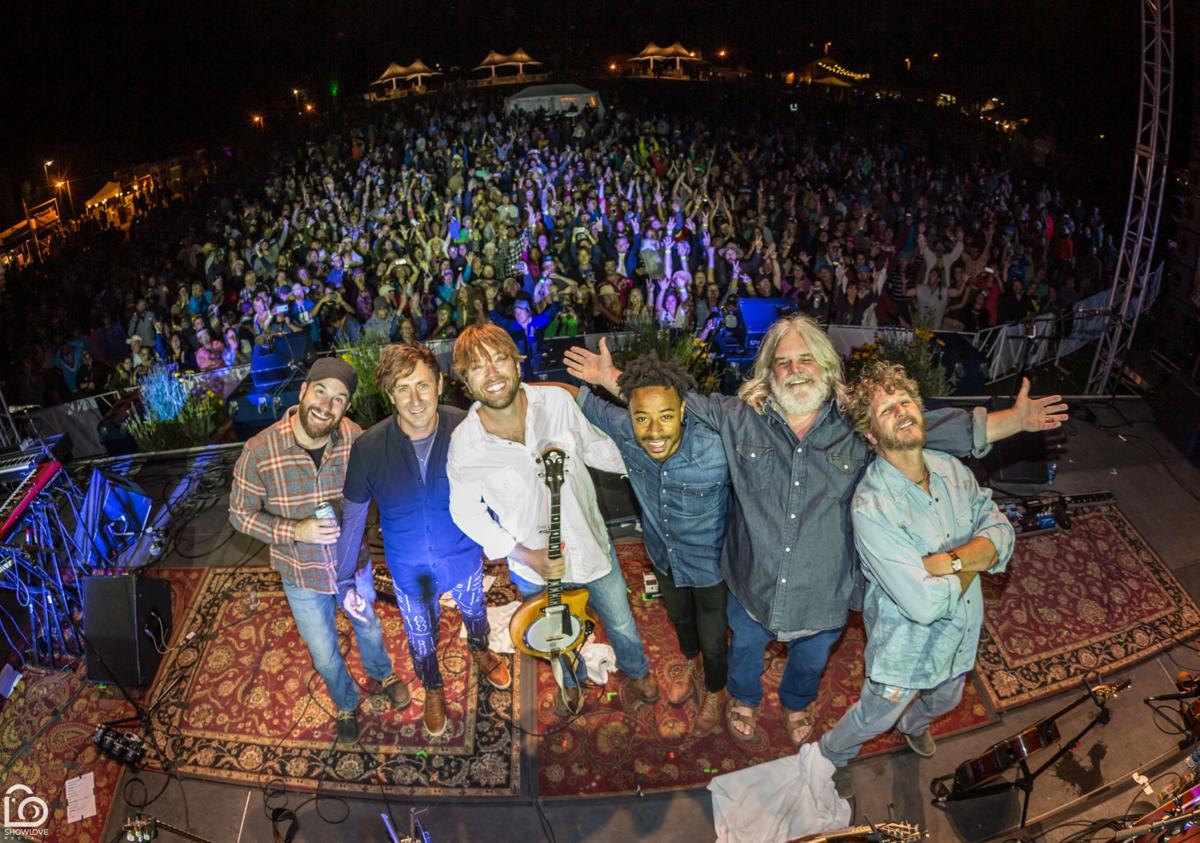 Leftover Salmon formed almost 30 years ago to play a New Years show in Crested Butte, Colo. Since then they have evolved to include rock, country and cajun influences into their jammy bluegrass tunes. Tickets to Leftover’s Saturday show at the Knotty Pine are already sold out, but Sunday’s show still has tickets available. 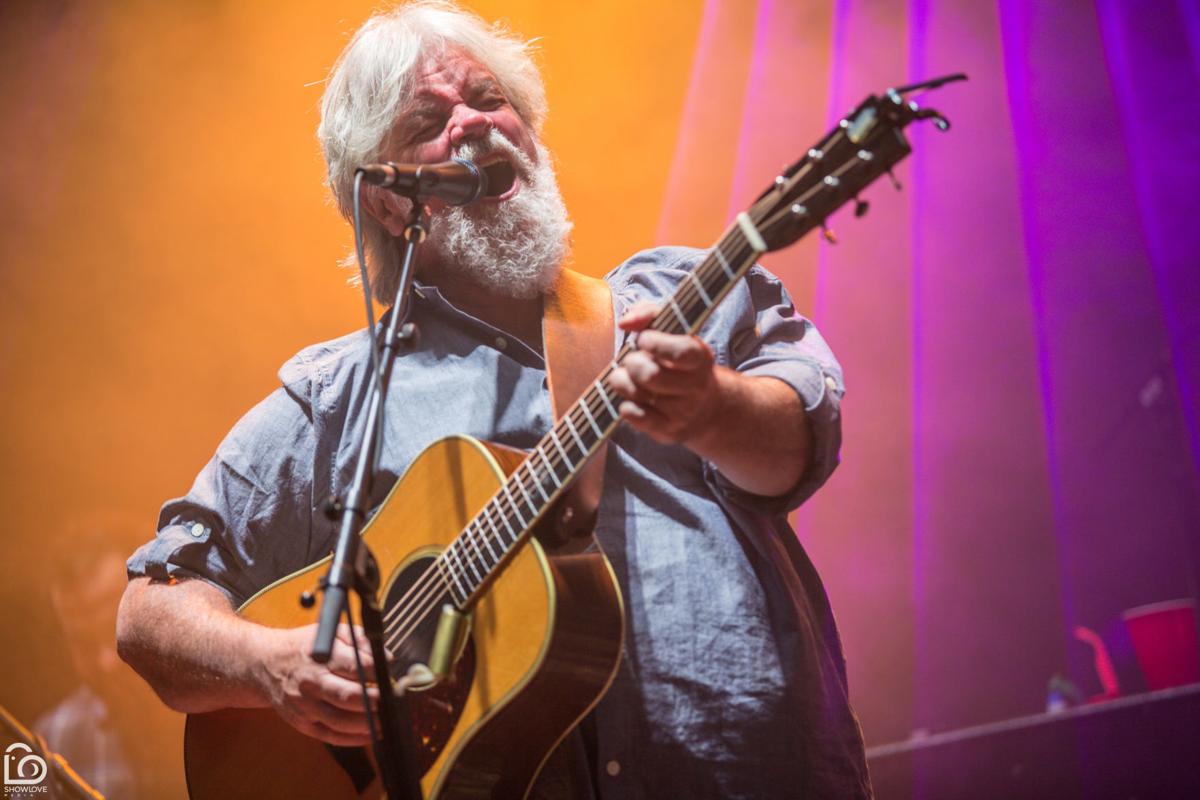 Vince Herman, who played at the Center alongside Justin Townes Earle and Oliver Wood in January, is one of two remaining founding members of Leftover Salmon. 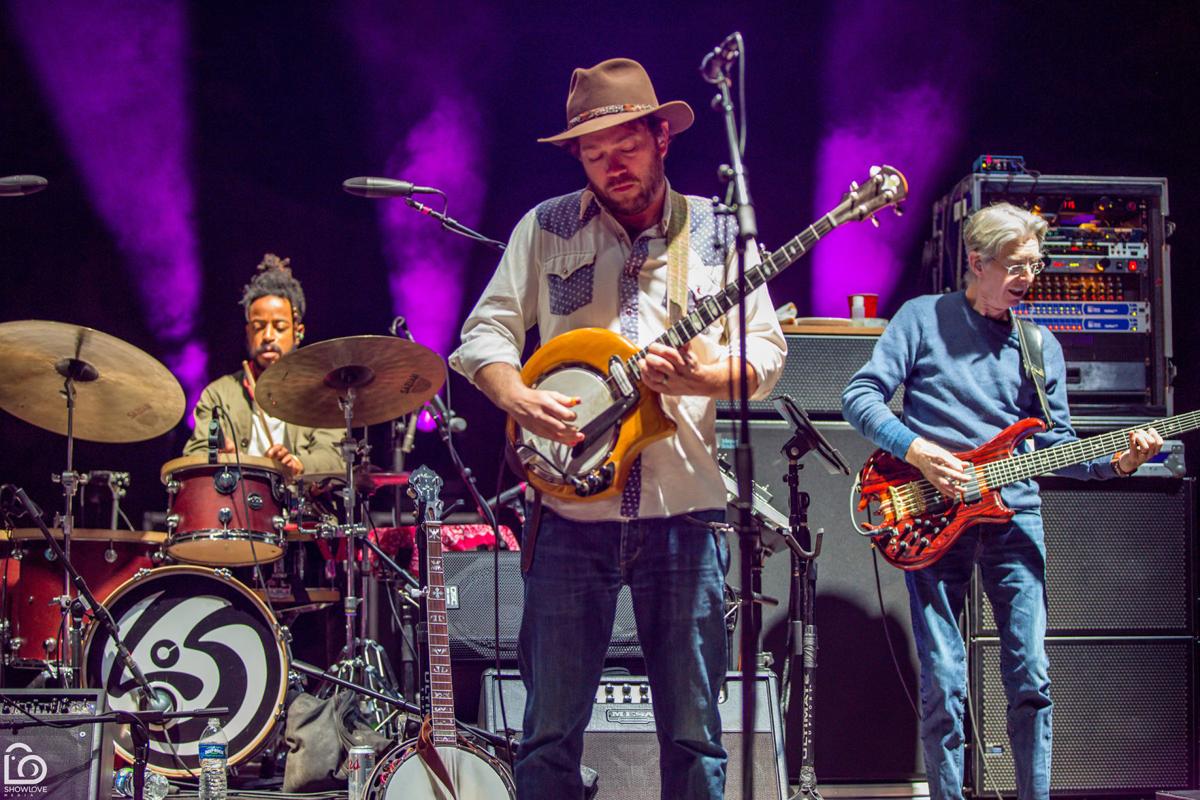 Andy Thorn plays an electric banjo solo at a Leftover Salmon show. Thorn rose to prominence in the bluegrass scene during the early 2000s. He followed in the footsteps of Noam Pikelny and became Leftover Salmon’s banjoist in 2011.

Leftover Salmon formed almost 30 years ago to play a New Years show in Crested Butte, Colo. Since then they have evolved to include rock, country and cajun influences into their jammy bluegrass tunes. Tickets to Leftover’s Saturday show at the Knotty Pine are already sold out, but Sunday’s show still has tickets available.

Vince Herman, who played at the Center alongside Justin Townes Earle and Oliver Wood in January, is one of two remaining founding members of Leftover Salmon.

Andy Thorn plays an electric banjo solo at a Leftover Salmon show. Thorn rose to prominence in the bluegrass scene during the early 2000s. He followed in the footsteps of Noam Pikelny and became Leftover Salmon’s banjoist in 2011.

This event has been cancelled due to concerns about the COVID-19 pandemic.

A drawn-out and war-cry-like “festival!” may be one of the most identifiable huzzahs in the land of jam bands, and it belongs to Leftover Salmon’s Vince Herman.

For 30 years Herman and Drew Emmitt have been picking polyethnic-Cajun-slam grass.

The book does its best to honor the ever-expanding band family that Leftover Salmon spawned on the Front Range of Colorado –– but no book can compare to what happens on the Leftover Salmon stage.

An undeclared master of ceremonies and an energetic force to be reckoned with, much of the stage is steered by Herman’s taste for stirring the pot.

“No one is Vince Herman, the madness and the fun,” Emmitt said. “I grew up in Nashville and it was very serious. Vince turned that all upside down on its head.”

Emmitt’s own virtuosity as a singer and musician certainly carries the antics well. While he has narrowed his once expansive quiver of instruments to just the guitar, mandolin and fiddle, he might just bust a saxophone back out.

The options for instruments to play are only outnumbered by the range of songs Leftover Salmon performs on stage beyond their own lyrics. Their covers include Waylon Jennings, the Stanley Brothers, George Michael, Bob Dylan, Peter Tosh, Lucinda Williams and Guns N’ Roses.

“Musically, there are no rules, we can do anything we want,” banjo player Andy Thorn said.

Thorn has been a Leftover Salmon fan since he was a teenager growing up in Chapel Hill, North Carolina.

“They were the first bluegrass band that I ever saw that wasn’t straight edge,” he said. “They were hippies.”

Having entered into Leftover Salmon while the band was on hiatus via the Emmitt-Nershi Band and the Drew Emmitt Band, Thorn might just be the strange attractor that launched this new era of Leftover Salmon, filling the space that had been filled by legends Mark Vann and Noam Pikelny.

Thorn has been an organic fit for the band, along with drummer Alwyn Robinson.

“I think Alwyn may be one of the best musicians I know,” Thorn said.

Robinson’s merits also include recently acting in the film “Wake Up,” which screened at Sundance Film Festival this year.

Leftover’s bassist Greg Garrison has been with the band since 2000. Regularly referred to as Dr. Greg Garrison on stage, Garrison is a professor of Jazz Studies at University of Colorado Denver when he’s not touring.

“We’re just lucky to have this cast of players,” Herman said. “It’s a gigantic family and very fluid. We should have baseball cards.”

The laughter surrounding Leftover Salmon seems to have no edge for the band or the fans. Whether it’s the “Vince is my spirit animal” stickers or Thorn’s “smoking banjo” or a freestyle rap or the Mayor McCheese making a cameo, there is always a party to be had or as their song goes, “Turn it up for the weekend, Singin’ Up to the Moon.”

“We have always been at the center of the jam grass scene and we’ve inspired many to join the bandwagon,” Emmitt said. “There’s nothing quite like the hilarity and festival atmosphere. But it really began in the ‘70s with Pete Wernick and the Banjo Bullies.”

It’s hard to find concrete information about the notorious Banjo Bullies who would tear through picking circles at festivals, interrupting jam sessions and then run away into the night to terrorize another circle.

Wernick, a founding member of Hot Rize, acknowledges these bullies did exist in an old Dr. Banjo newsletter but much mystery still clouds these festivarian revelers.

But the chaos and laughter are only made possible because the caliber of talent on stage is so high level. Leftover makes it look easy to drift into riffs and picking solos that were never on the setlist, maybe never dreamt up prior to that moment.

“Vince always says, ‘That’s what polyethnic-Cajun-slam grass is all about, if we name our own genre, then everything we do fits into it,’ ” Thorn said.

Joking about only needing setlists when they have nothing to play, Leftover Salmon is looking forward to taking the stage for two nights at the Knotty.

“We like going to fun places and celebrating that energy,” Herman said.

The Knotty Pine remains the smallest venue that Leftover Salmon plays, and one of the first national acts that Brice Nelson ever booked for the Victor supper club.

“It was 20 years ago this winter that we started bringing in national bands,” Nelson said.

Fans can get their boogie on for two nights, though the Saturday show has been sold out for months. They might get to hear a few new songs off the upcoming album recorded this fall at Echo Mountain Recording in Asheville, North Carolina.

The only song that’s been officially released is “Songs You’ve Left Unsung” which Garrison wrote in memory of Jeff Austin, his childhood friend who first told him about some bluegrass band needing a bassist.

“I guess a biopic starring some 20-year-old actors,” Herman said.  

This event has been cancelled