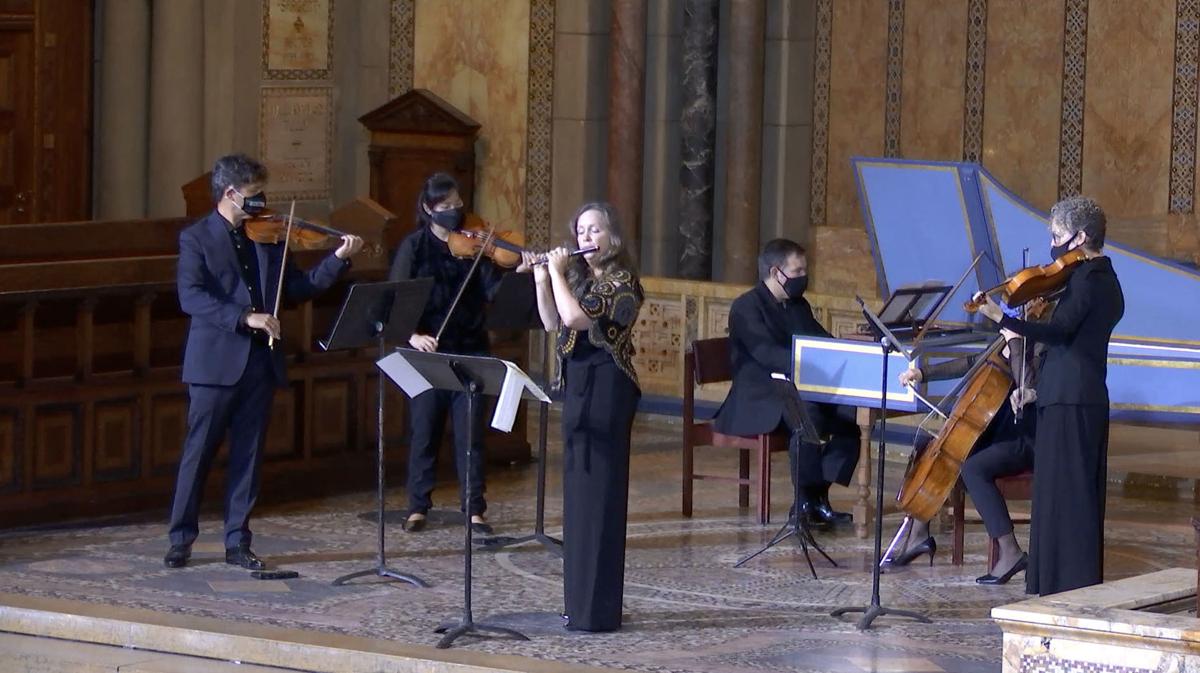 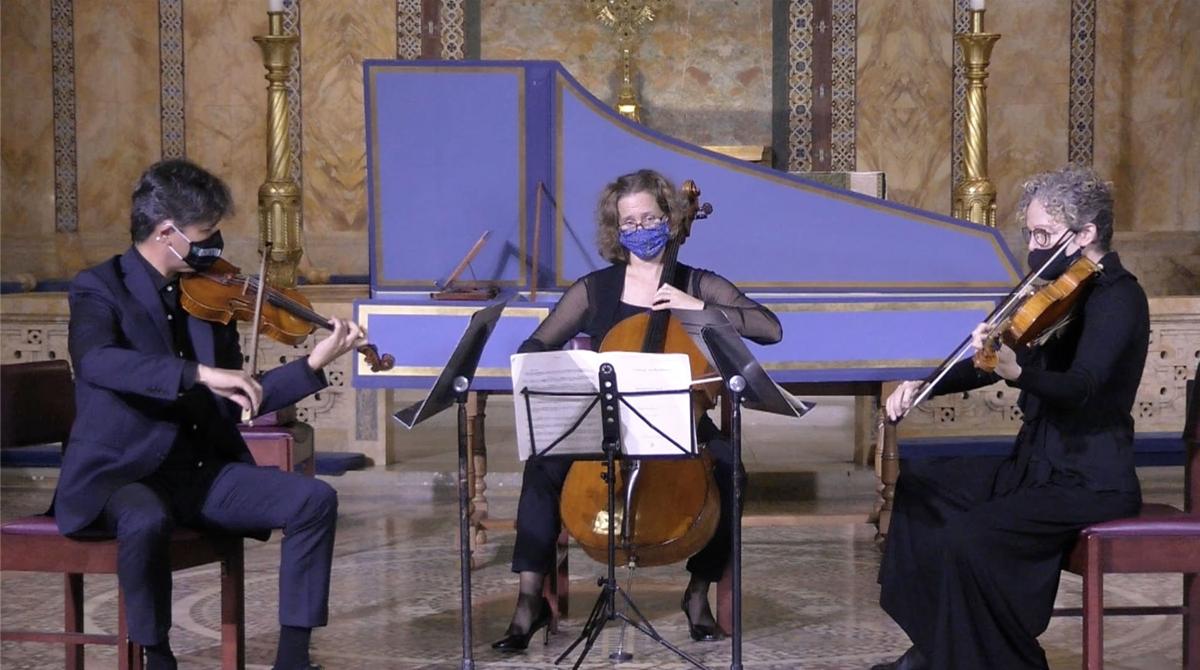 From its very start nearly 60 years ago the Grand Teton Music Festival’s mission has been to slake western Wyoming’s thirst for classical music.

But Emma Kail, the nonprofit’s new executive director, said there’s another equally important part to that mission: providing a rejuvenating experience for the musicians who come from all across the country each summer to work and play in and around the Tetons.

Judging by comments from the players in the first “GTMF on Location” concert — which was recorded Oct. 27 in St. Bartholomew’s Church in New York City and which will be made available to the public Thursday on the festival’s YouTube channel and Facebook page — fulfilling that part of the mission is as urgent as ever.

“It is so joyful to play with other people again!” violinist Ling Ling Huang wrote in a note to festival headquarters, located in downtown Jackson on King Street. “I have missed it so much.”

“I honestly think my psyche had blocked out how much I need this in order to feel like a whole person,” wrote Stephanie Mortimore, who performs the lead voice in the virtual concert’s Vivaldi’s Piccolo Concerto in C Major.

Cellist Kari Jane Docter admitted she went home and crashed, exhausted by rehearsing and performing: “I guess I’m not used to doing this, after eight months of ‘performance rest,’” she wrote.

This summer festival musicians missed out on their rejuvenating boost when the coronavirus pandemic led to the cancelation of the festival’s 59th season. It was a crushing development for audiences and for players, most of whom also were furloughed from the orchestras and ensembles they perform in the rest of the year. In the case of this week’s “GTMF on Location” musicians, five of the seven have been laid off from their year-round job with the Metropolitan Opera Orchestra since April.

Earlier this year Richard Brown, a percussionist with the festival for 40-some years and the organization’s artistic advisor, was in New York City on his own business. While Manhattan had been picked as one of the “On Location” locations, because so many festivals players lived there the rest of the year, few other details had been settled.

“He remembered that I’m in New York,” said Paolo Bordignon, organist and choirmaster for St. Bartholomew’s, on Park Avenue and 50th St., and a former festival harpsichordist, “and he thought maybe my church could be the right venue.”

Once Bordignon got on board a program came together quickly. He recalled a Bach sonata for harpsichord and viol de gamba, a baroque precursor of the cello, and he proposed “Still Life Crumbling,” a 2012 duet for harpsichord and violin by Hong Kong-American composer Tonia Ko. Some of the other musicians enlisted for the date — violinist Bruno Eicher, violist Mary Hermann and cellist Joel Noyes round out the roster, all of them Met Opera ronin — suggested Beethoven’s String Trio No. 5 in C minor.

The English composer’s 1909 Elegy was selected to acknowledge our collective experience of the pandemic — the lives lost, the months during which we have put life on hold, the incredible work and sacrifices made by so many. The festival has dedicated, in partnership with St. John’s Health, this first concert “to the frontline health care essential workers” in Jackson Hole and everywhere, Kail said last week during an interview outside the festival office.

“We send this out as a thank you for what they are all going through,” she said. “It’s a reflective piece, an elegy … recognizing the collective grief of this time. I think that’s a logical fit for us to dedicate a specific piece to them.”

On the other hand you can’t have a program of all solemn, reflective music, Kail said, so Vivaldi’s “really rocking” Piccolo Concerto will help lighten things, as will Bach’s sonata, which, Bordignon noted, alternates slow, graceful movements with faster dance-like sections that showcase the two musician’ virtuosity.

After canceling its 2020 summer season the festival got cracking to provide something for its fans and followers. The result was a five-part “Music from the Mountains” series, virtual concerts featuring festival stalwarts playing chamber music that were made available for free online.

“‘Music in the Mountains’ was done at a really high-quality level,” Kail said.

“On Location” should prove to be just as high quality, with three cameras offering perspectives and views of the musicians that concertgoers typically don’t get in the concert hall. And the final product — which was edited in the festival’s offices by its outreach and operations associate Mike Richards — also shows off a silent star of the concert: St. Bart’s itself.

“The building is a resplendent, gorgeous space,” said Bordignon, who raved about the acoustics from the chancel, right in front of the altar.

The landmark church dates to 1918 and was built as a place of worship for the Vanderbilt clan and other prominent New York families. It is richly ornate, with classical Byzantine architectural details and colorful Art Deco mosaics.

“It plays a role in the magic,” Kail said of the church.

And as the festival continues with the series, the plan is to find more such spectacular performance spaces. The next installment of “GTMF on Location” is set to be recorded and filmed Nov. 27-29 in the Alice Miller Chapel on the campus of Northwestern University, and will feature a brass quintet assembled by French horn master Gail Williams. It is scheduled to go online on Dec. 10.

“There’s no substitute for experiencing live music together with the performers,” said Kail, but the opportunities that digital content make available are nothing to scoff at.

“When I applied for this position in December, there was hardly anything available online,” she said. “Now we have a catalog. It’s a wonderful resource for the audience, but also for the festival to have a broader national and international reach. There’s also a lot of potential to package that content for young people and students, to supplement the needs for the schools. … I think that there is this can-do spirit, that we’re going to make it work, that where there is a will, there way.”

Look for this first “GTMF on Location” concert on the festival’s YouTube channel and Facebook page. Additional installments will be announced at GTMF.org and will go live on the second Thursday of each month through March.