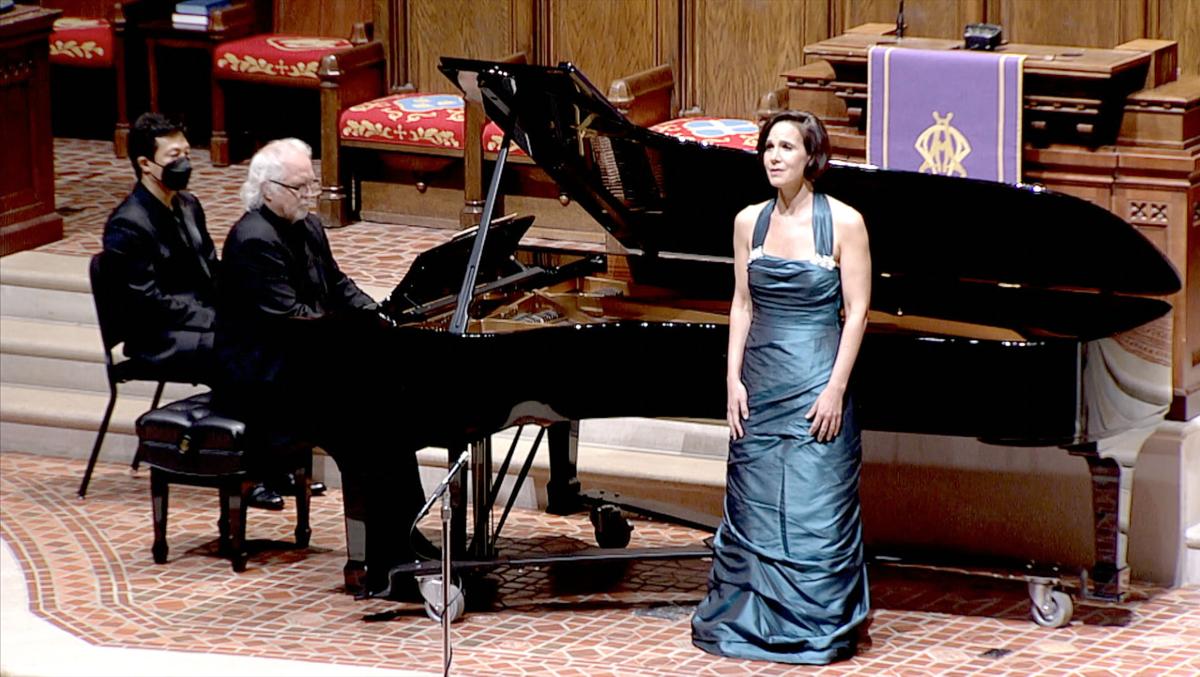 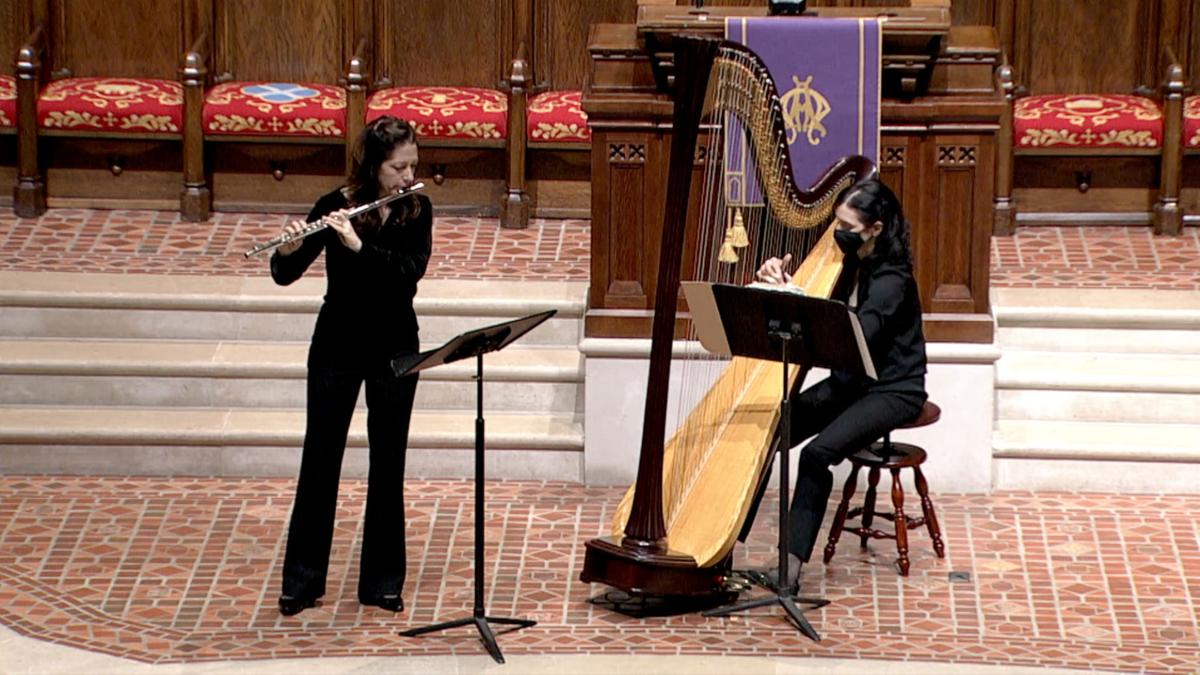 With music by familiar composers as well as some new names, performed by Grand Teton Music Festival stalwarts who call the Atlanta Symphony Orchestra their permanent home, the festival premieres its fifth and final online “On Location” recital — its coronavirus workaround — on Thursday.

But it likely won’t be the last such program from the homegrown Teton music nonprofit.

“We’re going to keep doing it next year,” said Richard Brown, a festival percussionist for 40-plus years, artistic advisor for festival and producer of the five “On Location” events presented since November.

Even though the festival has been steaming ahead on what it hopes will be a mostly “normal” seven-week summer season, “These things were successful,” Brown said of the virtual concerts, “successful enough that the board wants us to keep doing them.”

“On Location — Atlanta” was recorded at the end of March in the Georgia capital’s historic First Presbyterian Church, surrounded by its gallery of stained-glass windows that includes seven from the legendary Tiffany studio. The church, which dates to 1848, has broadcast services on the radio since 1922 and was the first Atlanta church to broadcast on television, so its sound and video resources and expertise were in place when the festival came knocking.

The 13 musicians involved have long ties with the Teton festival or the Atlanta orchestra — or both — including GTMF Music Director Donald Runnicles, the Atlanta orchestra’s principal guest conductor since 1999 who for this affair plays piano. Kelley O’Connor, one of Runnicles’ favorite mezzo-sopranos and a frequent Teton guest soloist, has worked with the Atlanta orchestra since at least 2003, when she created the role of Federico Garcia Lorca for Osvaldo Golijov’s opera “Ainadamar” under its longtime music director Robert Spado. And Jerry Hou, a former GTMF associate conductor, is associate conductor and youth orchestra director in Atlanta.

Violist Paul Murphy and cellist Daniel Laufer, who have both put in 30-plus years at Atlanta and at least 10 years in Jackson Hole, will play in the opening set, Four Songs by British composer Dame Ethel Smyth, and in Gustav Mahler’s Piano Quartet.

Victorian mores could not deter Dame Ethel (1858-1944) from pursuing her love of music, and though it took nearly all her life she came to be well known and even respected for her work — as well as for her role as a suffragette and, later in life, an author. Her 1903 opera “Der Wald” was the first (and, for more than a century, the only) opera by a woman produced by New York’s Metropolitan Opera, and for her 75th birthday the famed conductor Sir Thomas Beecham directed a festival of her work, including a gala at the Royal Albert Hall that Queen Victoria attended. During her lifetime she completed six operas, a mass, a “choral symphony” titled “The Prison,” 10 orchestral works, several dozen works for chamber ensemble and solo keyboard, and a bunch of songs.

Her 1908 set of Four Songs on the Atlanta program feature an unusual collection of instruments: violin, viola, cello, bass, harp, flute, two percussionists and either a mezzo-soprano or a baritone. O’Connor performed them in Houston last September and brought them to the table in Atlanta for consideration. Aside from her, the songs were new to the group.

“They’re very colorful songs,” Laufer said, “with fun orchestration. … It was a pleasure listening to Kelley and learning these pieces. Each one is different — very listenable, nothing abstract … but a lot of playfulness.”

By turns whimsical, ethereal and sprightly, the settings of words by French poet Henri de Régnier combine romantic elements with an impressionistic flourishes. Hou facilitated the quick preparation of the new work by conducting the nine-piece group.

O’Connor returns for the final work, another set of four songs, Austrian-born American composer Erich Korngold’s (1897-1957) “abschiedslieder,” or “farewell songs,” from 1920-21, with Runnicles at the piano.

Murphy, who did not play on them but who calls himself as a Korngold fanatic, extolled the songs’ beautiful melodies and the way the instrumental and human voices work together. He praised the interpretation of O’Connor and Runnicles, who just last fall helped present Korngold’s orchestrated version of the songs in Atlanta — only the second time those songs been performed in U.S. in their orchestral version. Presented this time in their original piano-and-voice version, they aptly express the composer’s sorrow and his coming to grips with the aftermath of the First World War, he said.

In between the songs, Runnicles, Murphy, Laufer and violinist David Coucheron, the concertmaster for the Atlanta Symphony Orchestra who will make his GTMF debut this summer, will present Mahler’s Piano Quartet in A minor.

Teton festivalgoers will know Runnicles’ abiding love for Mahler (1860-1911), programming one of his huge Earth-shattering or -reforging symphonic works nearly every season he has conducted in Jackson Hole. The quartet, though, is a rare bit of chamber music by the orchestral genius. Dating to 1876, when Mahler was just 16 years old, it is wholly realized, mature work — a single movement that he seems to have intended to expand upon — but may not be immediately identifiable as Mahler, sounding to Murphy more like Brahms or Schumann.

“It’s gorgeous,” said Laufer, for whom this was his first performance of the work. “Such melodies! More reflective — I wouldn’t call is sad … but I’m a sucker for any piece, especially chamber music, that has beautiful melodies the cello gets to play.

“It’s also fun to play with Donald,” he said. “He doesn’t play often in Atlanta or at GTMF.”

In the Tetons, Runnicles usually stands at the conductor’s podium, his back mostly to his audience; the piano show a different side of him, physically and musically, his both fellow musicians and the audience.

The penultimate work on the program — a duet performed by harpist Elisabeth Remy Johnson and flautist Christina Smith — is by Italian composer Nino Rota (1911-1979). His best-known work is the 150 or so film scores he wrote over his lifetime, including some for Federico Felini’s masterpieces, though he also found time to compose 10 operas as well as chamber, orchestral and keyboard works.

“The Sonata for flute and harp was written in 1937,” Smith wrote in a text to the News&Guide. “Anyone familiar with Rota’s film scores for movies like [Franco Zeffirelli’s] ‘Romeo and Juliet’ or [Martin Scorsese’s] ‘The Godfather’ will, I think, recognize the beautiful melodic gift that seems to come so easily to Rota. The piece has an almost archaic or ancient sound to it and is so well written for both instruments that, combined with the many beautiful melodies, I feel speaks to why it is a favorite of both audiences and performers.”

“GTMF on Location — in Atlanta” premieres 7 p.m. Thursday on the festival’s Facebook page and its YouTube channel. It and the previous four program will remain available for free online viewing. Visit GTMF.org for more about the series and for highlights of the planned 2021 season — the festival’s 60th — set to start July 2.